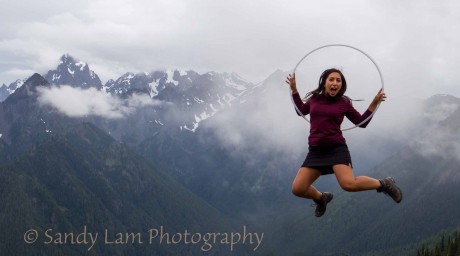 Backpacking seriously never gets old. You can climb mountains upon mountains in the Cascades or in the Olympic National Forest and every view is just as breathtaking as the peak before it. We are just so damn lucky in the Pacific Northwest. 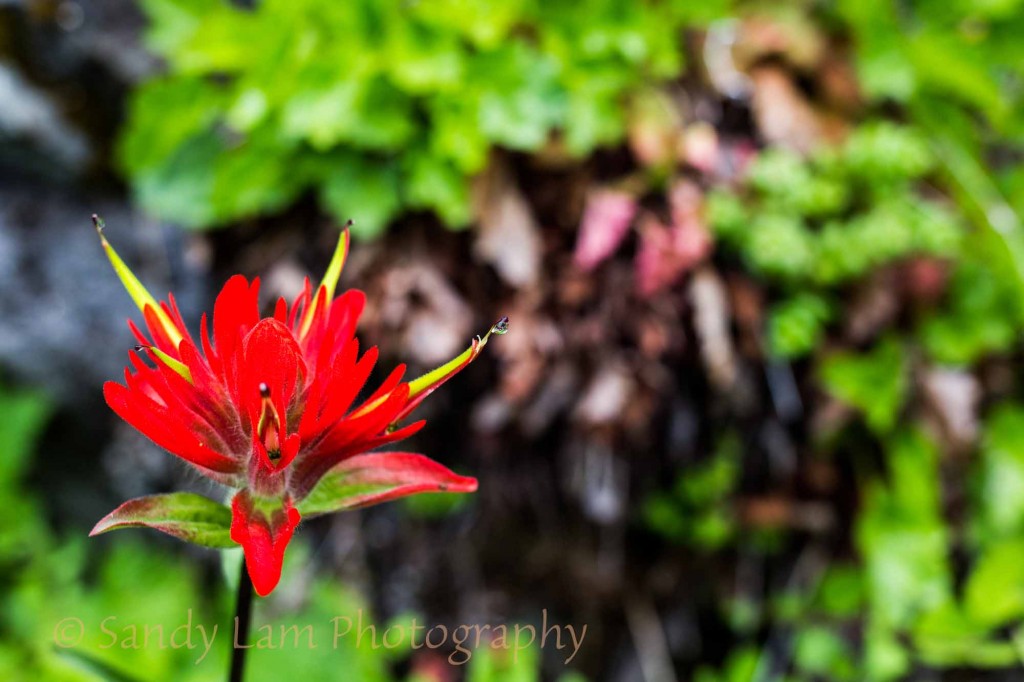 While I had been anticipating another trip to the coast over 4th of July weekend, with all of the sailing I’ve been doing lately, I was ready for some mountain top time. So I bailed on the annual Third Beach trip, and opted for something at a higher elevation. Originally I was thinking of a trip in the North Cascades (my favorite area), but most alpine lakes I looked up were still inaccessible due to snow. Even with the crazy “heat wave” we’ve been getting this summer. After perusing the WTA trail finder page, I stumbled upon something called Silver Lakes.

Nestled on the east side of the Olympic Forest, it seemed like a reasonable trip. 11 miles roundtrip, 3400 feet elevation gain. A couple friends would be meeting us a day later so we didn’t want to do something crazy intense so that they could still have some energy for some day adventures. What I didn’t realize was that the trip would require a bit of elevation gain AND loss before you reached the lake. So no matter which direction you were coming from, you had to climb over a ridge before you could get to the other side. It wasn’t terrible, but certainly not one of my favorite things to do. The ferry from Edmonds to Kingston was hardly a hassle, we only had a wait about a little over an hours(not bad for 4th of July weekend), and the directions to get to the trailhead were easy enough (From Quilcene drive US 101 south for 1.5 miles. (From Shelton follow US 101 north for 50.5 miles.) Turn right (west) onto Penny Creek Road. After 1.5 miles bear left onto Big Quilcene River Road (Forest Road 27). Drive 13.5 miles, ignoring the sign at 12.5 miles for the Mount Townsend Trail (that’s the lower trail to Sink Lake). Turn left onto FR 27-190 and in 0.75 mile come to the trailhead).

It was the first day of crabbing season and there were crab pots galore off shore!

To get to Silver Lakes, you hike part of the Mount Townsend trail and turn off at a split about  3.4 miles into the trail. Unfortunately for us, everyone in the world and their mother decided to make a trip to Mount Townsend, so we ended up parking at the lower trailhead. Adding an extra mile to our trail.

The lower trail head is pretty hard to find. It’s less than a mile once you turn onto the forest service road, but the sign blends in completely with the surrounding trees, and the trail starts straight up surrounded by trees. It will be on your right hand side. if you start gain elevation or cross the creek, you’ve gone too far.

The lower trail is fairly gradually and goes by quickly. With a peak at Sink Lake and an awesome restored cabin/shelter, it’s almost tempting to just set up camp there. But that would have just been too easy. 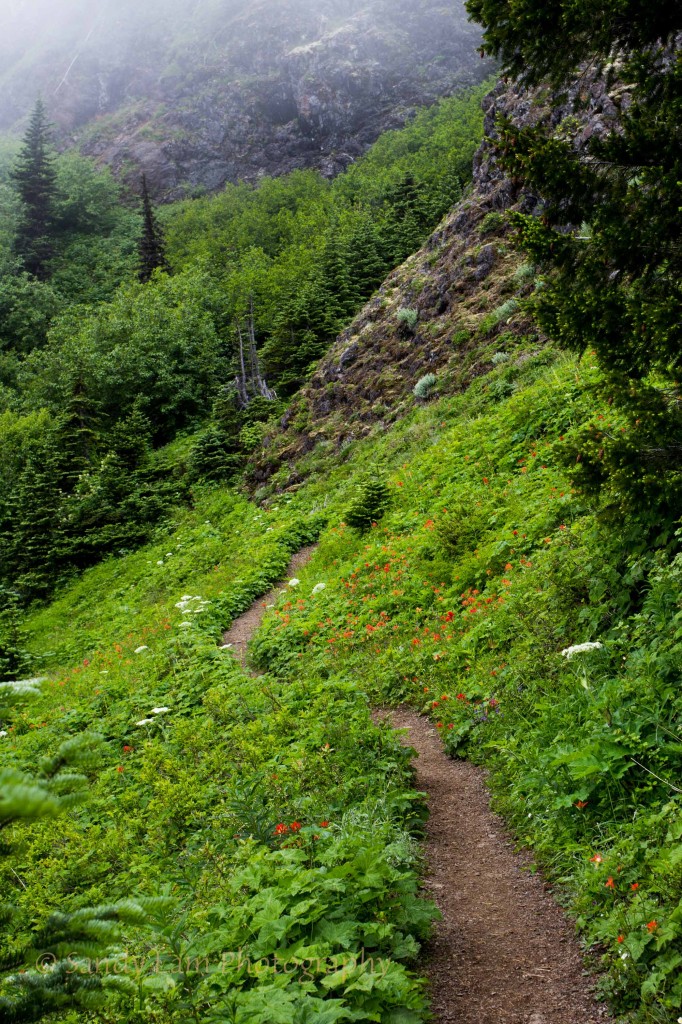 Unfortunately the first 3 miles of the trail starting from the upper trail, is completely straight up (the photo above is not of a steep area…this was the first time I was able to breath on the trail). I was a bit taken back by this since I’m a out of shape. The climb is relentless and the switchbacks hardly offer any relief either. It was terribly overcast so we didn’t get much as far as views on the way up, but the wild flowers were GORGEOUS! I’ve never seen so many wildflowers before besides my first time to Winchester Mountain, but the slopes were just COVERED in them. It was amazing! 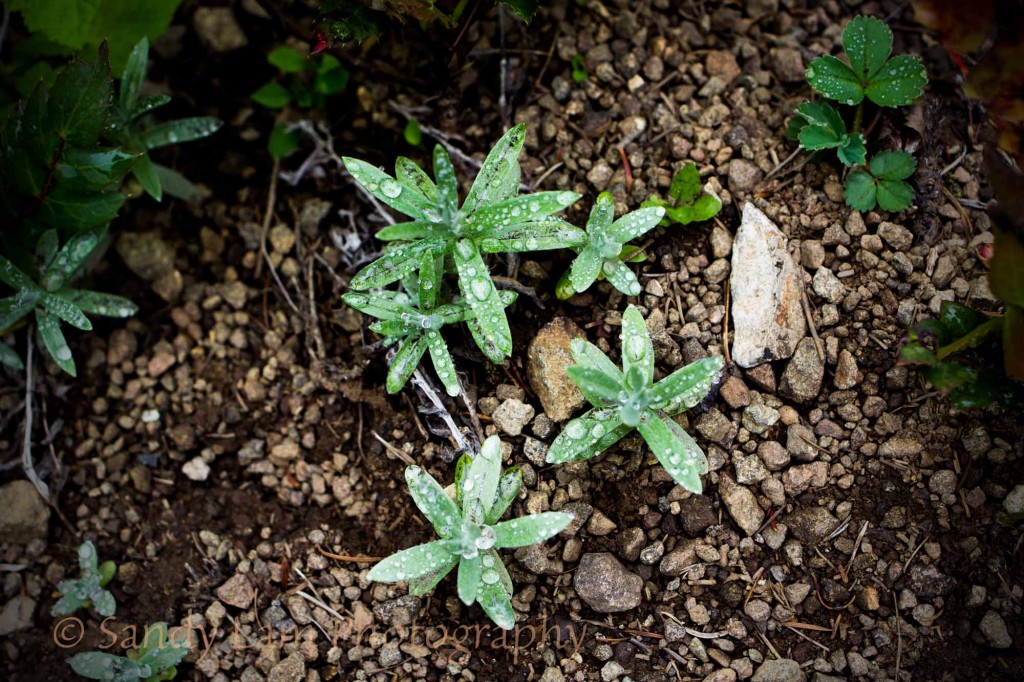 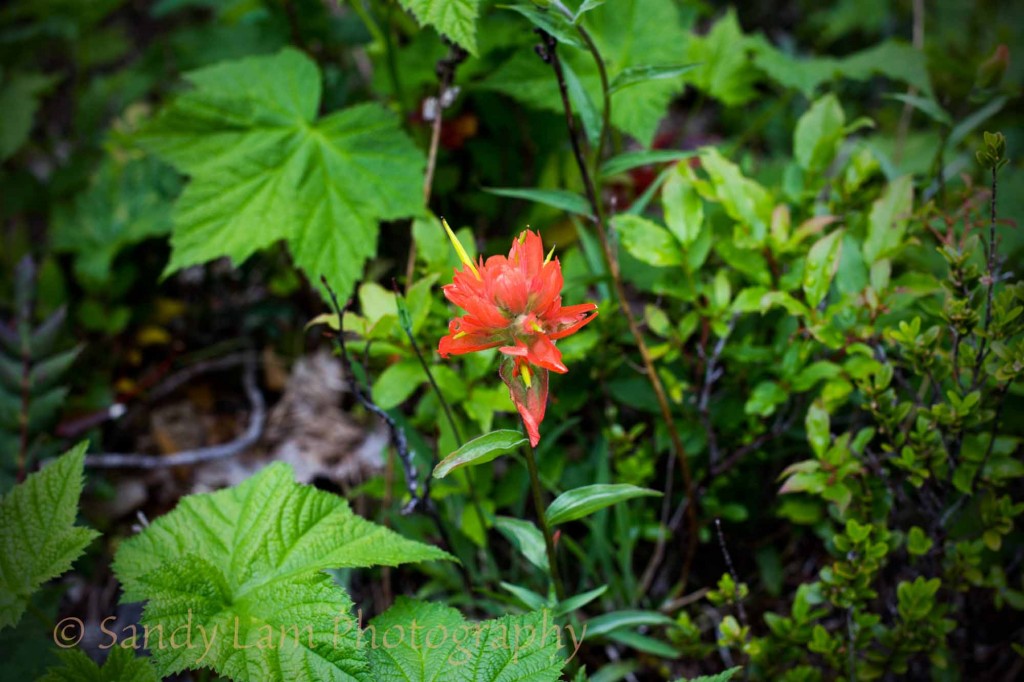 Once you get past the steep climb, from the fork you still got another 2 miles until you get to the lake. Unfortunately and fortunately at the same time, it’s all downhill from there. A quick jaunt to the pass allows for some really fantastic views which we were able to see a glimpse of despite the overcast. 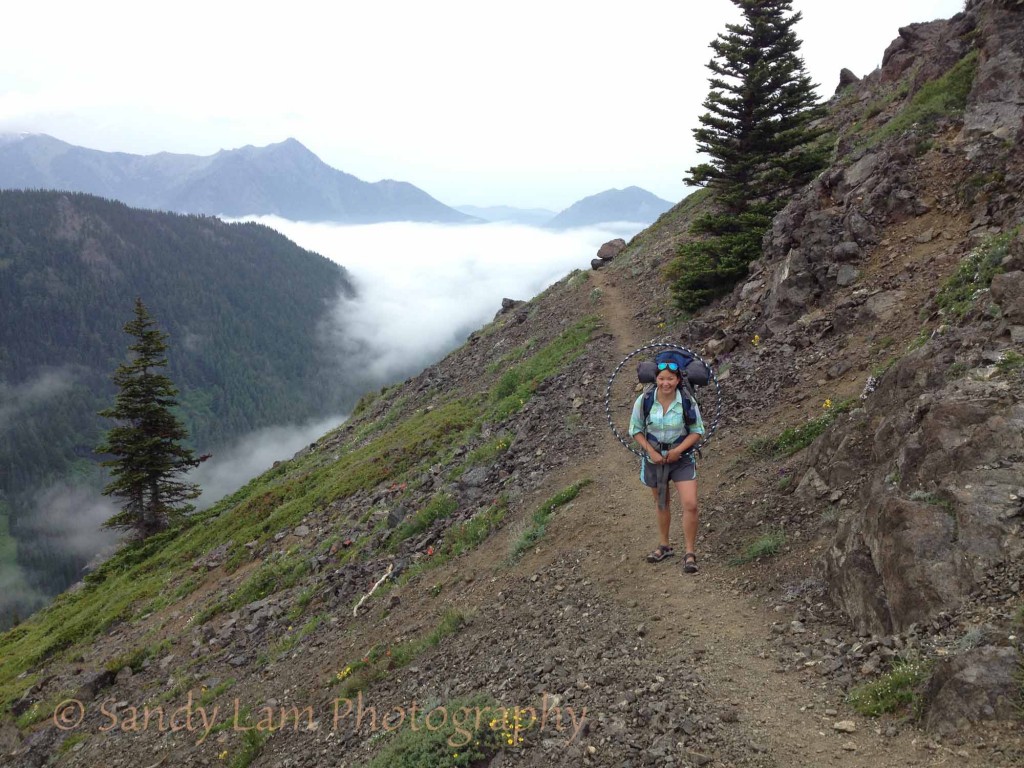 The walk down from this ridge was a little sketchy at first…the open meadow/hillside has a pretty narrow trail with a lot of slippery pebbles. You keep feeling like you’re almost to the lakes as you quickly descend a couple hundred feet and meet SIlver Creek. But alas, the trail starts to ascend just for the last quarter mile or so before you finally reach the lakes.

Unfortunately for us it rained as we descended the entire time so by the time we got to the lake there was no time to enjoy the scenery, just find a decent camp spot and try to dry off.

Entrance to the lake the day we left.

It was a lot more crowded than I expected. at least 7 other tents were on site, so it was tricky trying to find a relatively secluded area. Lucky for us Bill found one on west side of the lake (less traveled) with a big rock face so we had a small cave to dry some of my stuff off.

The next morning the clouds were in and out, the rain sprinkled off and on, but terrible part was I almost felt like I was car camping. Children running and screaming around, it was hard to get any peace and quiet. We also had some visitors in the night that decided my sweaty/wet shirt I left to dry in the cave was dinner. I JUST bought the shirt at REI the day before. 🙁 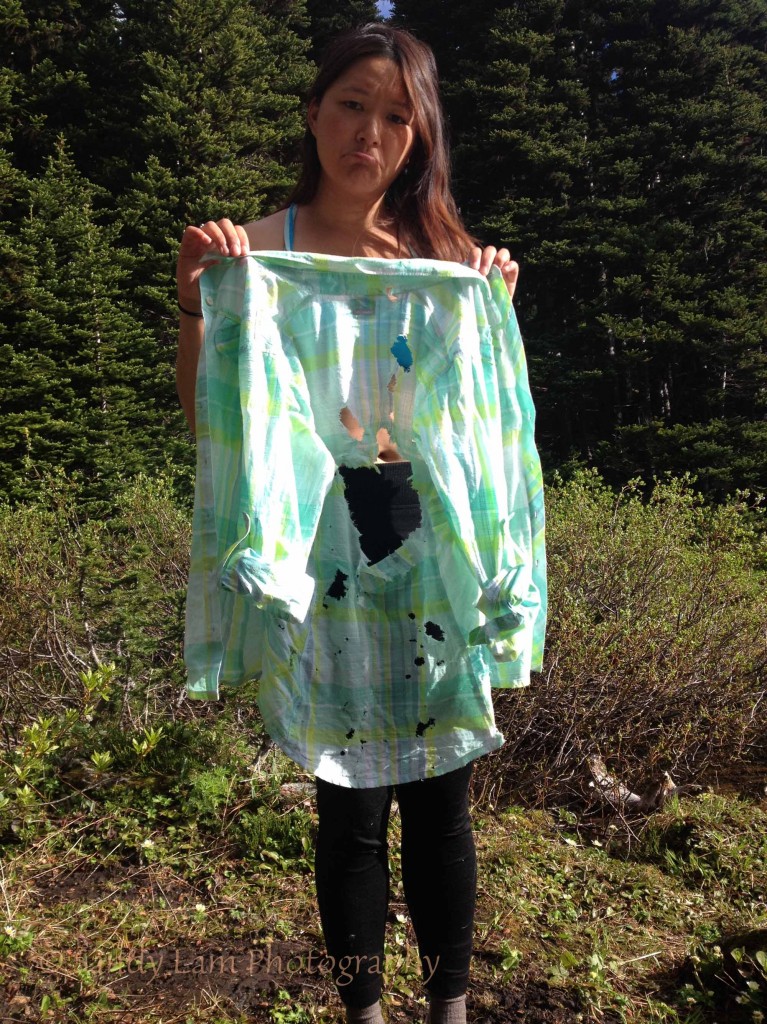 I managed to catch a period of sun and waded out into the lake for my morning yoga ritual. This time I stepped it up a notch. I added a hula hoop! I recently started learning how to do a couple tricks and bought some hoops to practice. I was excited to use it in the mountain! 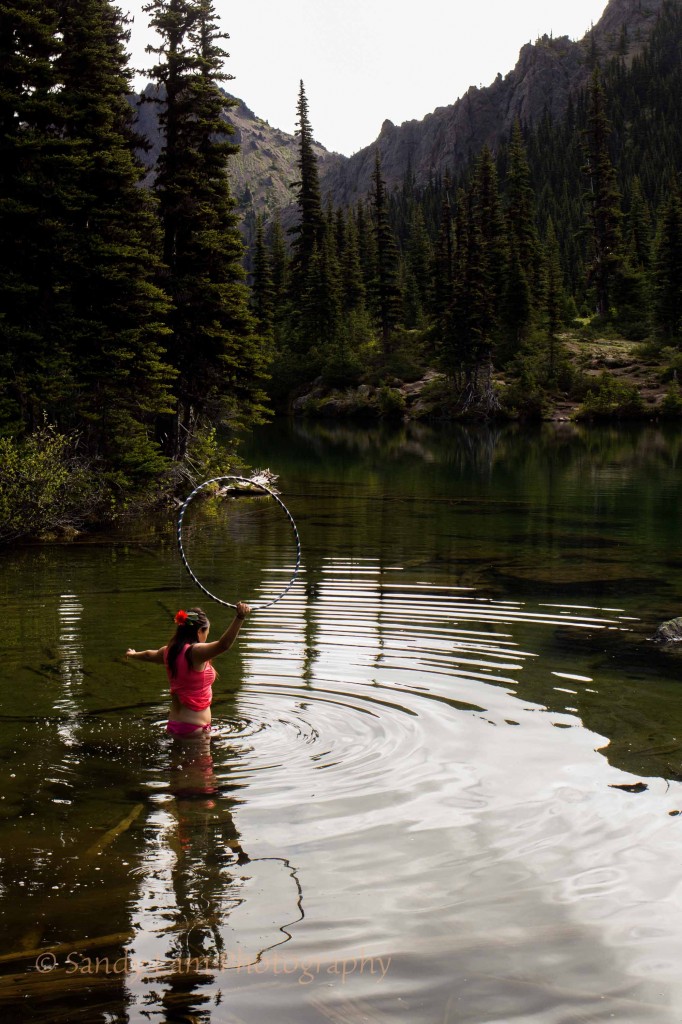 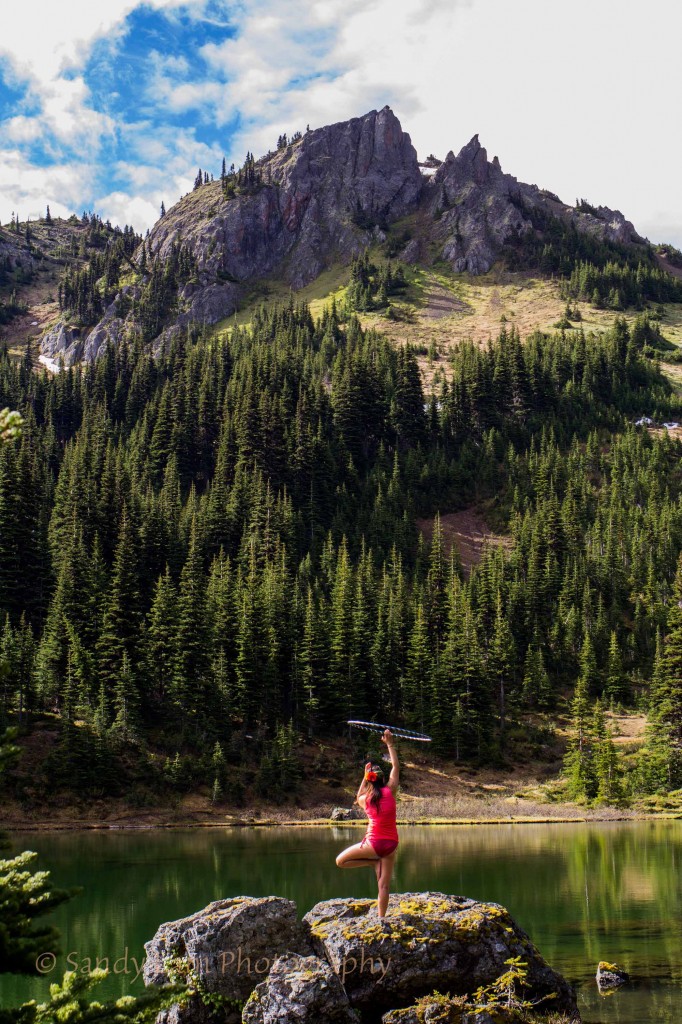 Eventually Jamie and Kevin caught up to us, and we knew something great would happen. After they got settled in and we relaxed by the lake, we decided to head up the ridge to see what was on the other side. 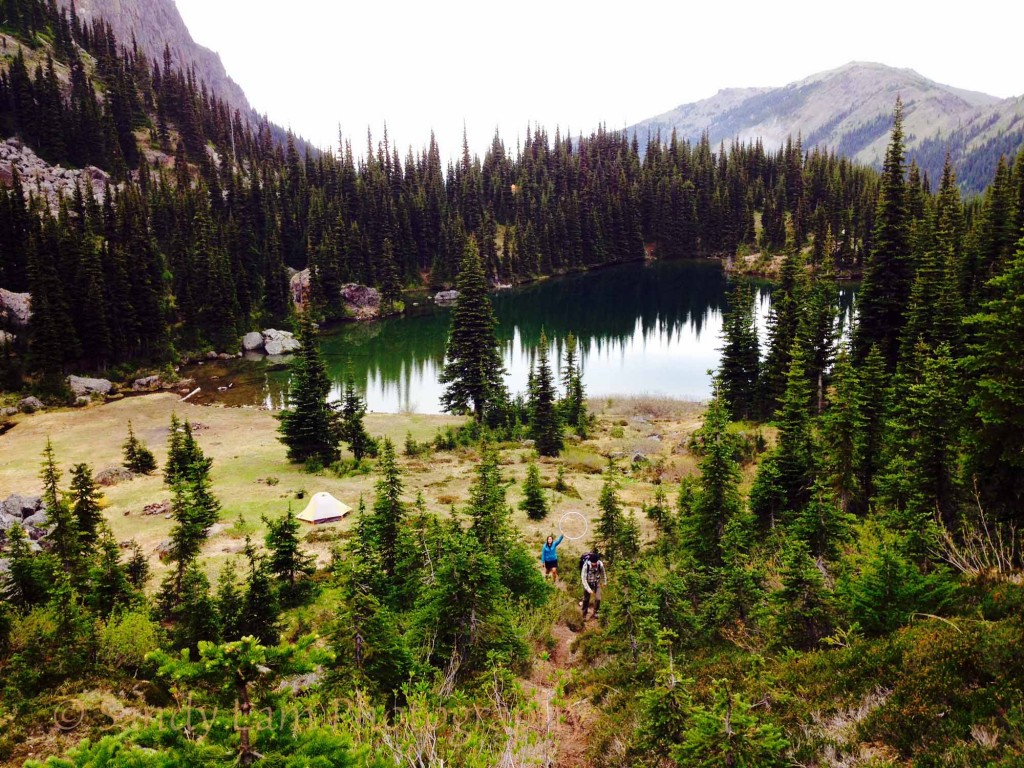 Leaving our campsite and the lake behind! 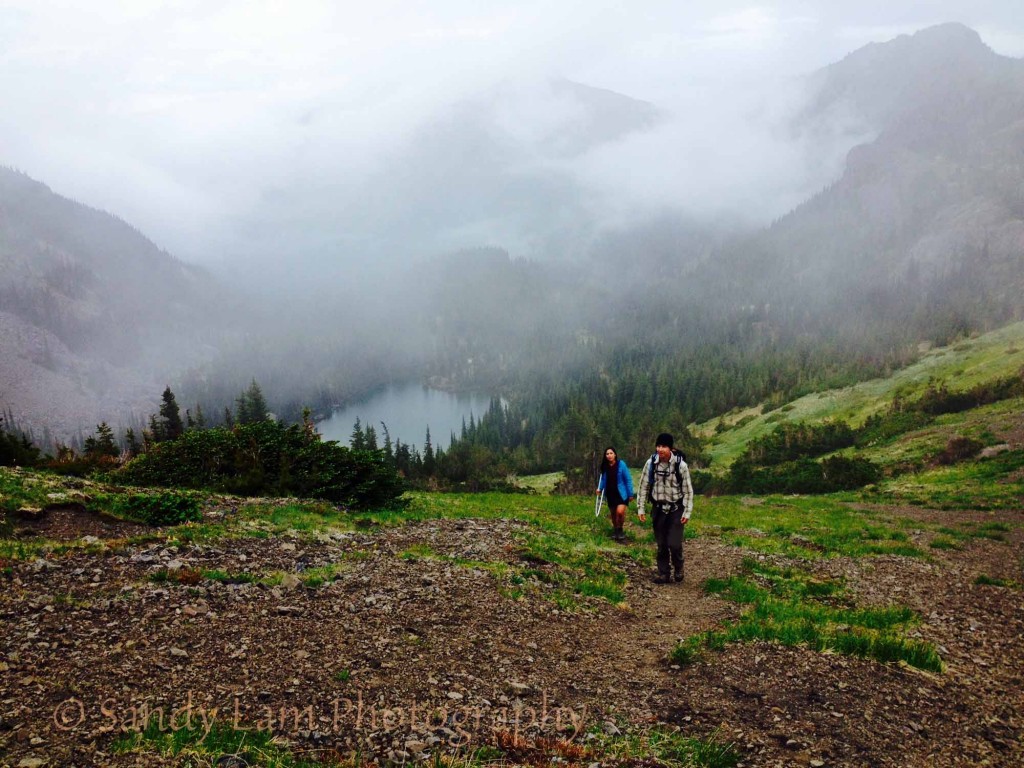 Perfect example of how quickly the weather was changing.

We had NO idea what was in store for us. The view was caught us off guard and was AMAZING.

Jamie and I spent a lot of time finding places to hoop together. It was AWESOME. 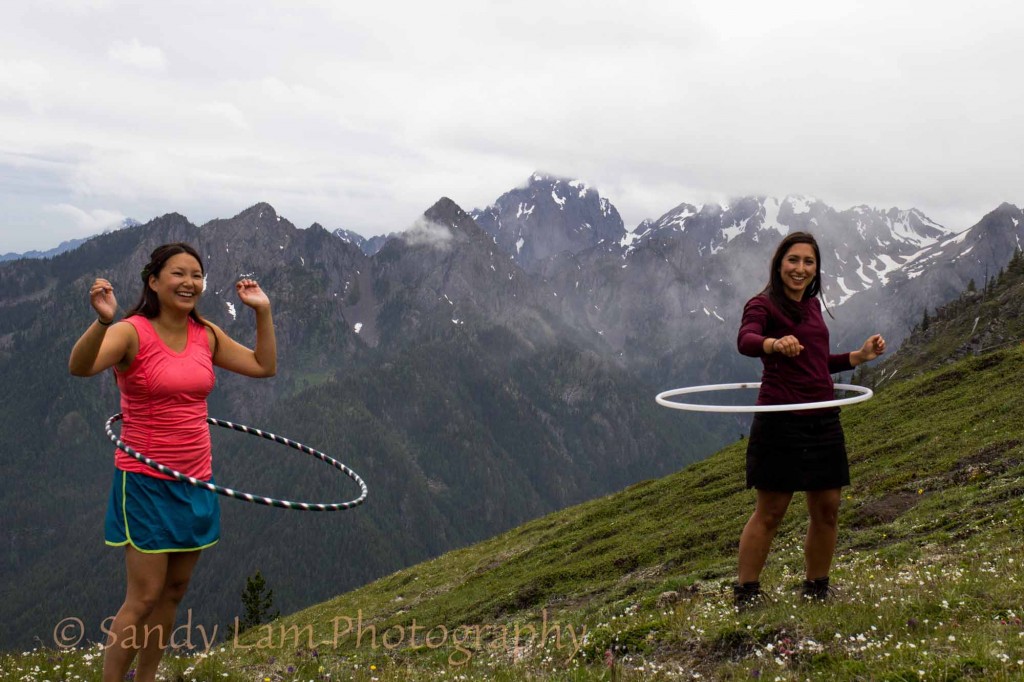 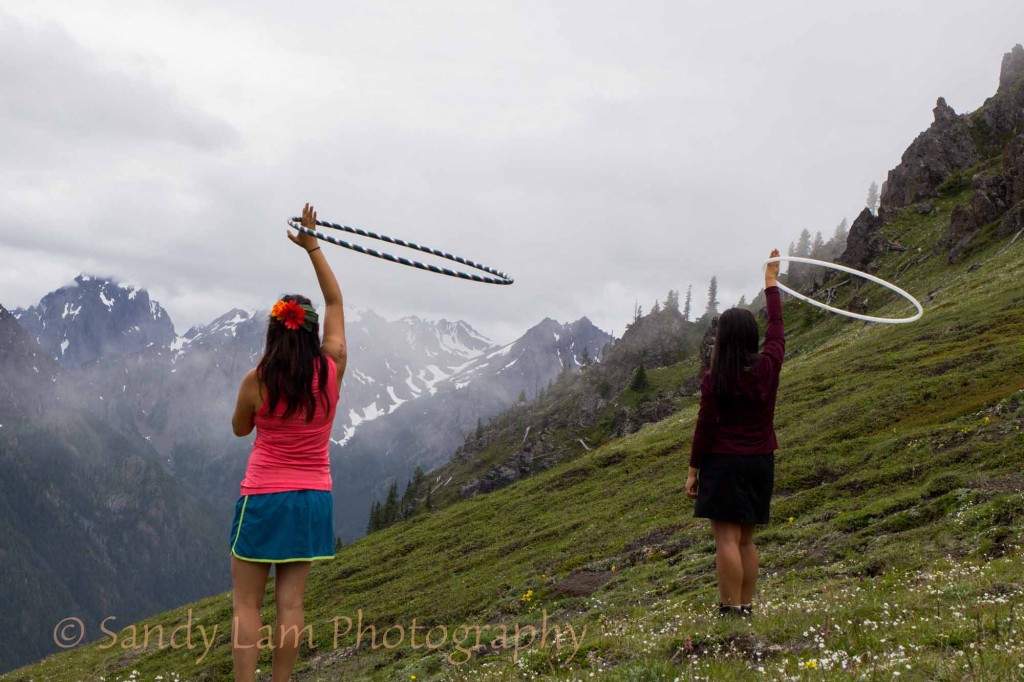 Jamie is the WAY better hooper so I had fun taking pictures of her. 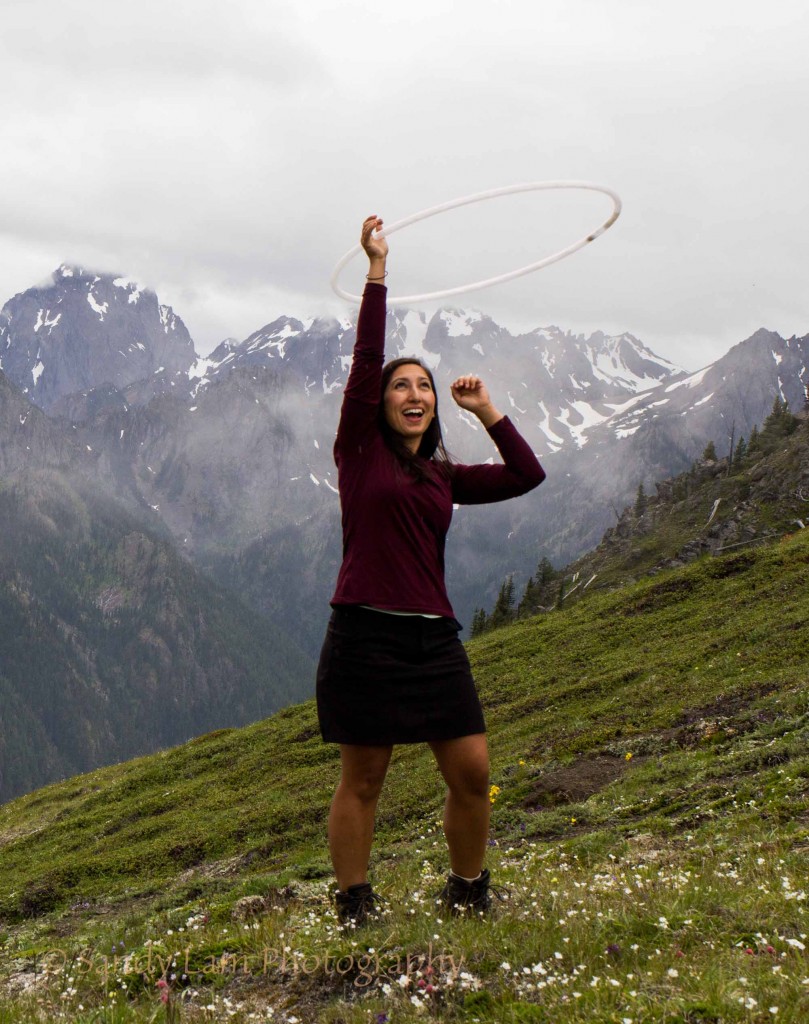 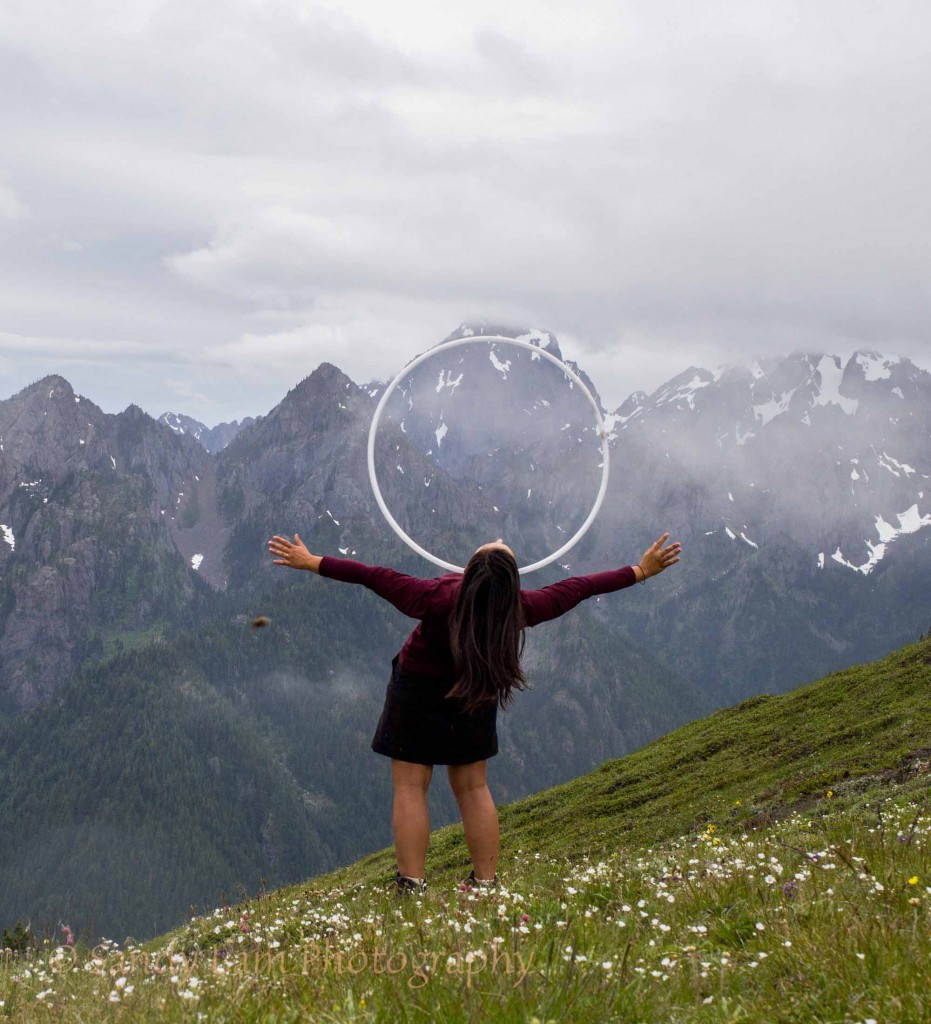 What we didn’t realize until we got to the top was that we were staring right at Marmot Pass, our very first backpacking trip together 4 years ago. It was the start to one of the best friendships I have ever come to know (in my short life so far). 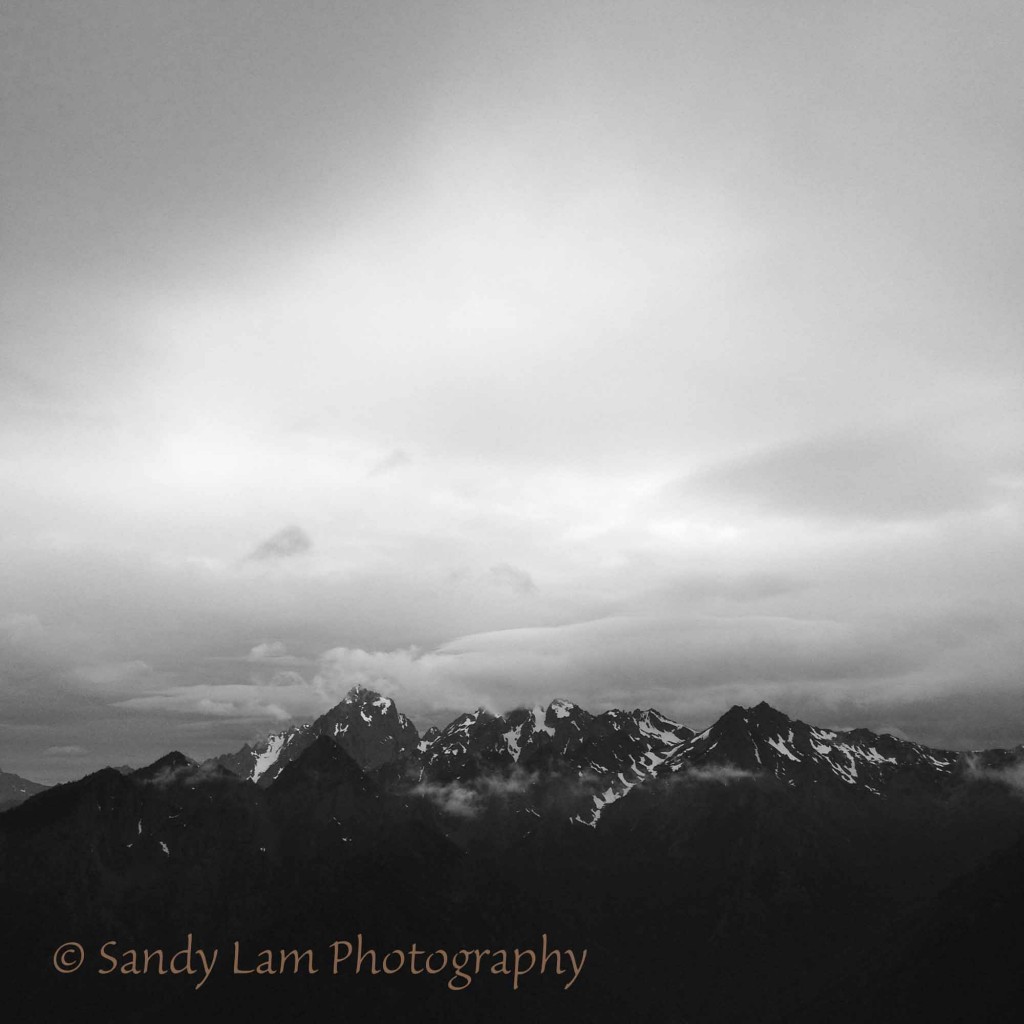 I didn’t have a zoom lens but we could actually see Mt. Rainier, Mt. Adams, and Mt. St. Helens all in the same view! We also couldnt believe that you could see Seattle from where we were standing! It was just a tiny cluster of white stuff among the vast landscape, glowing in the sunlight. 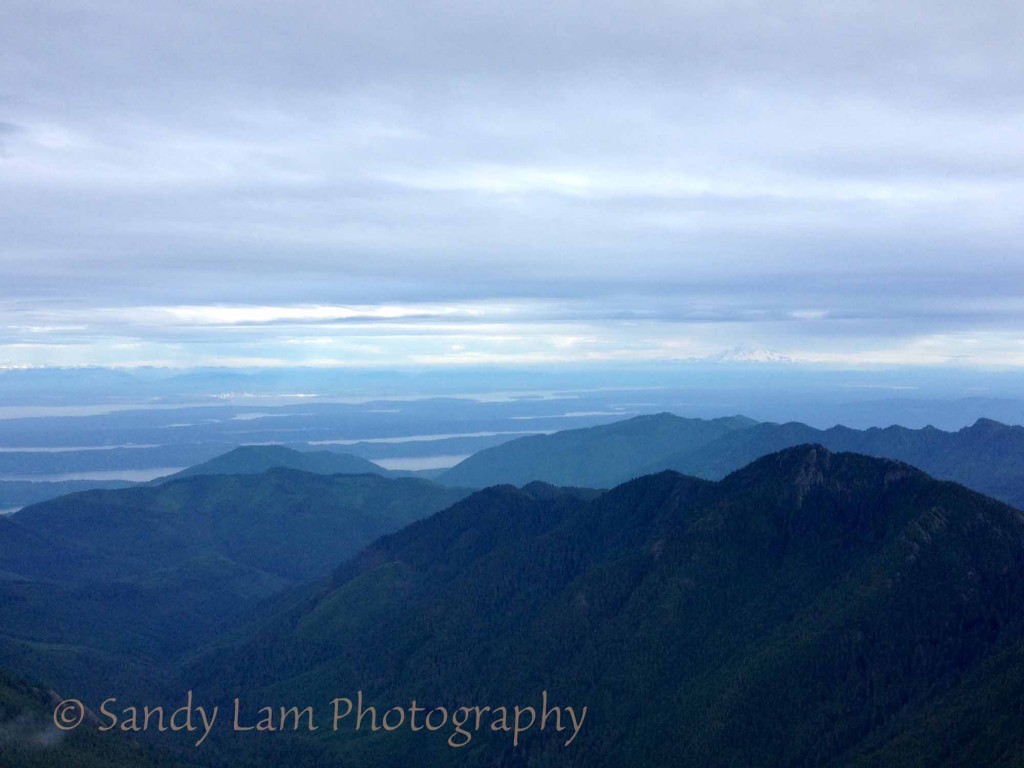 Squint really hard and you can see Seattle and the three mountains! 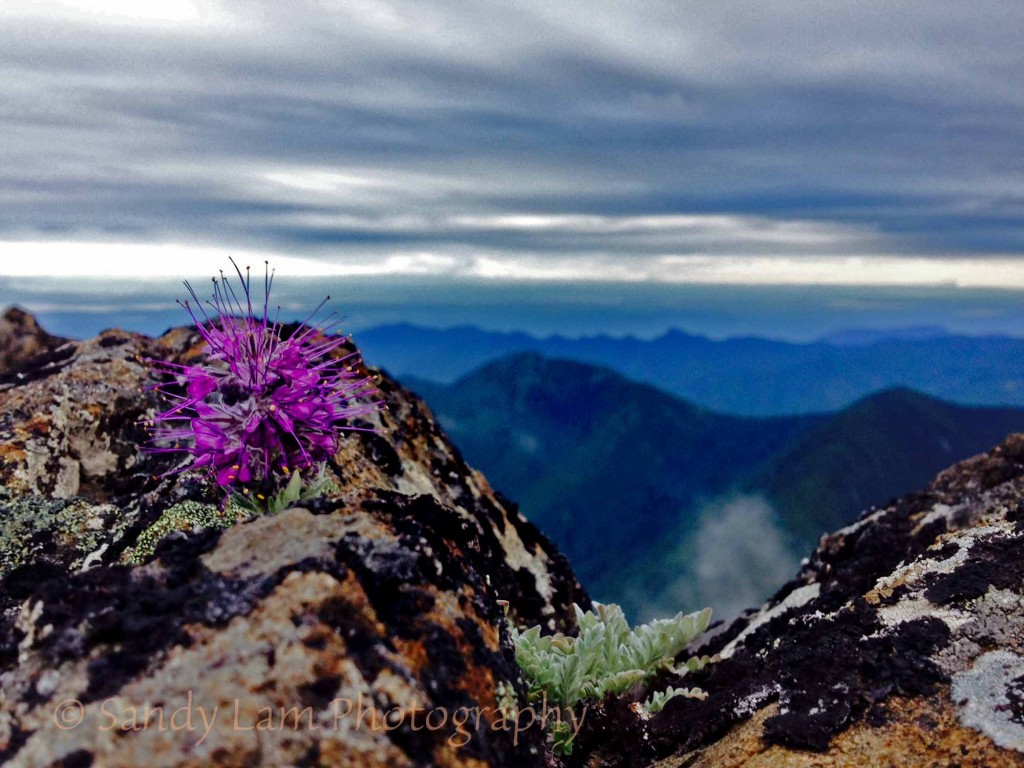 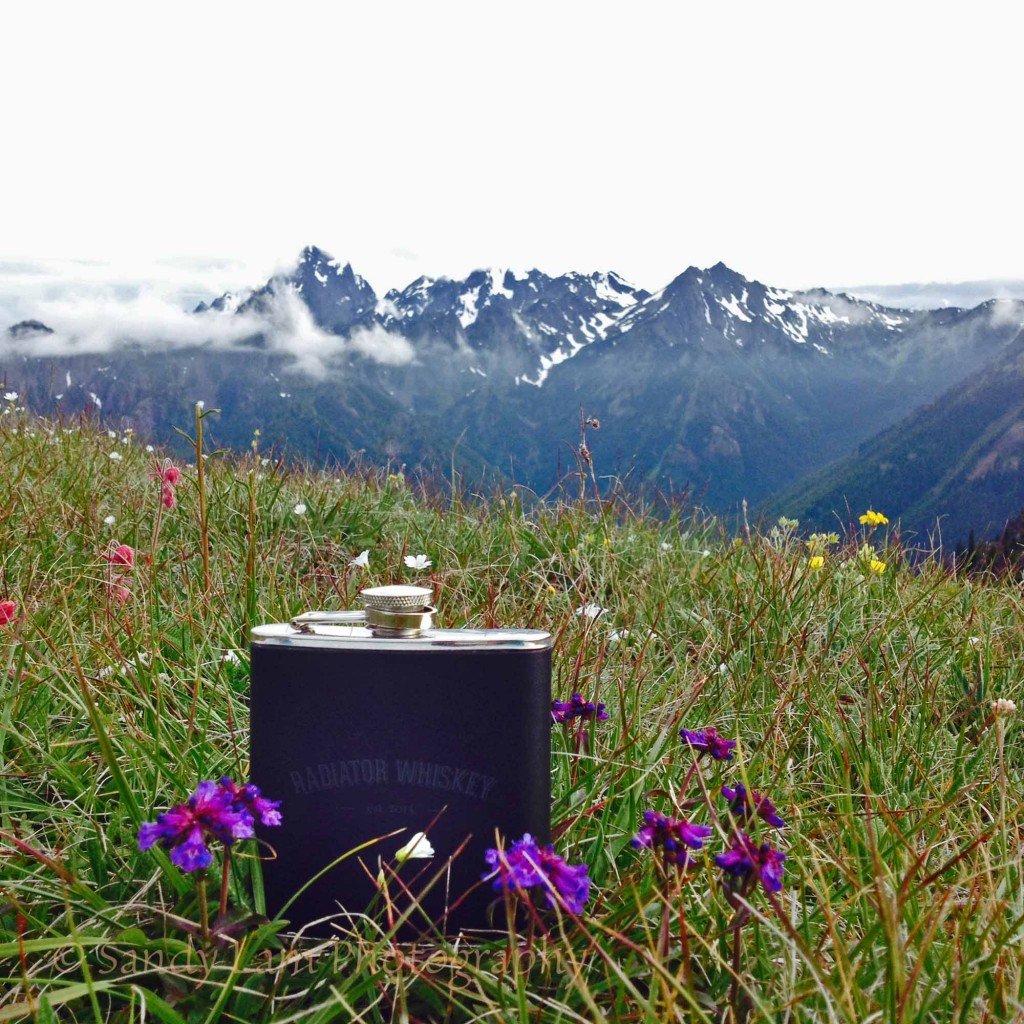 It was a fun afternoon of exploration before we scurried to the bottom as the rain clouds moved in. 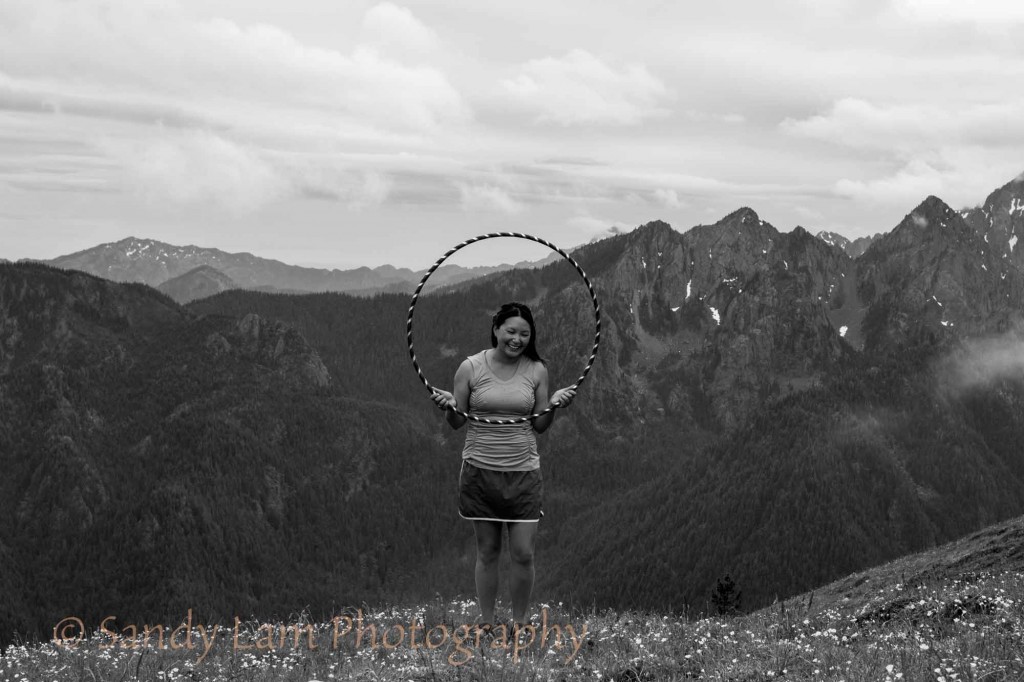 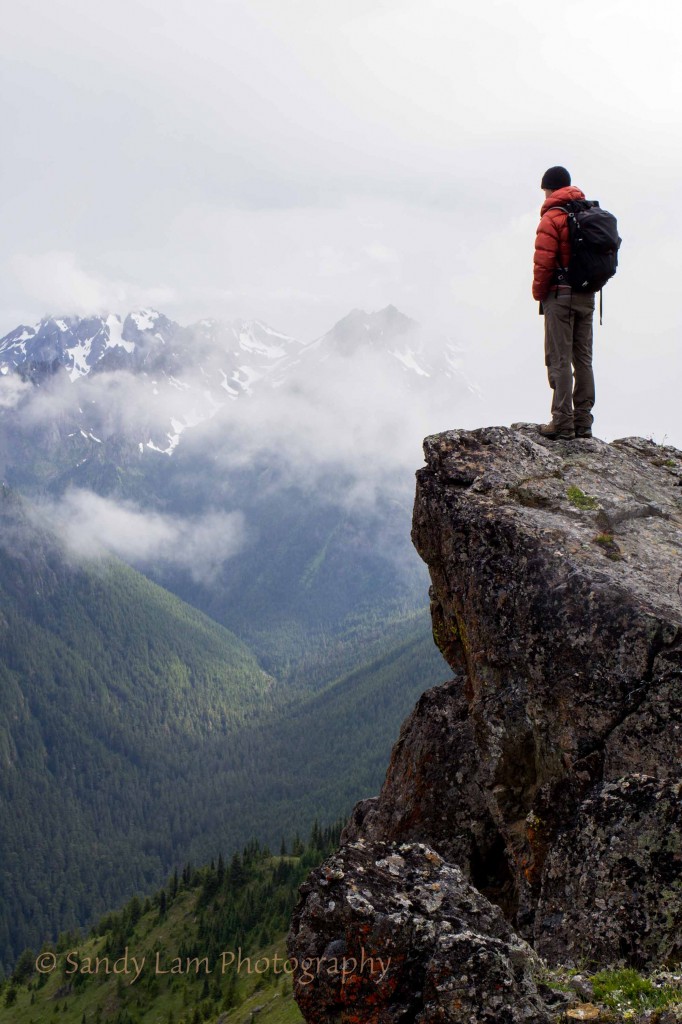 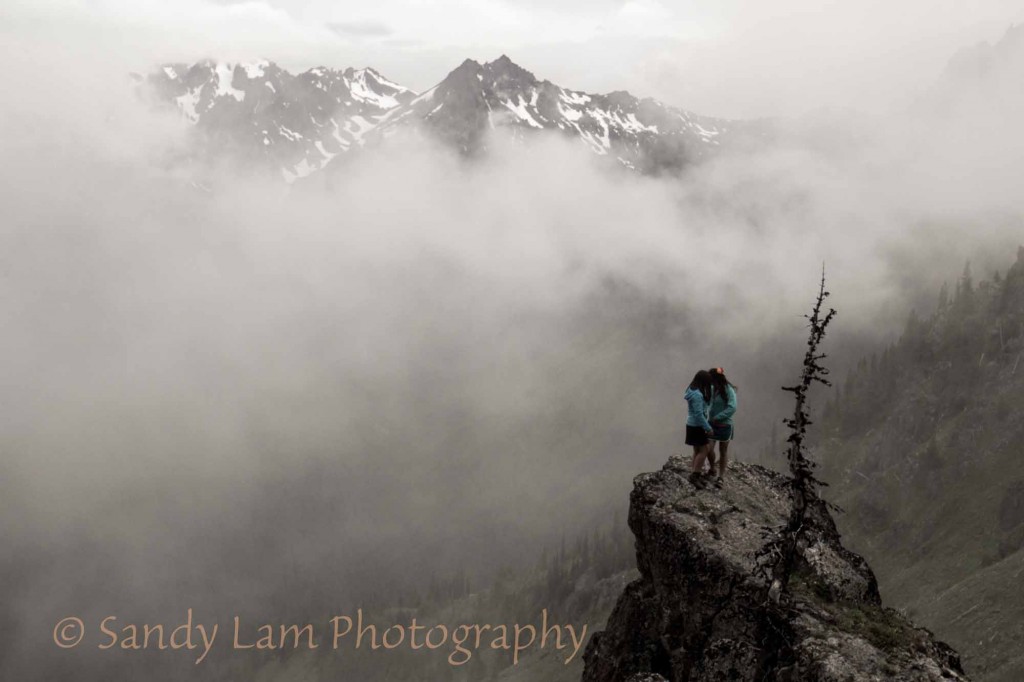 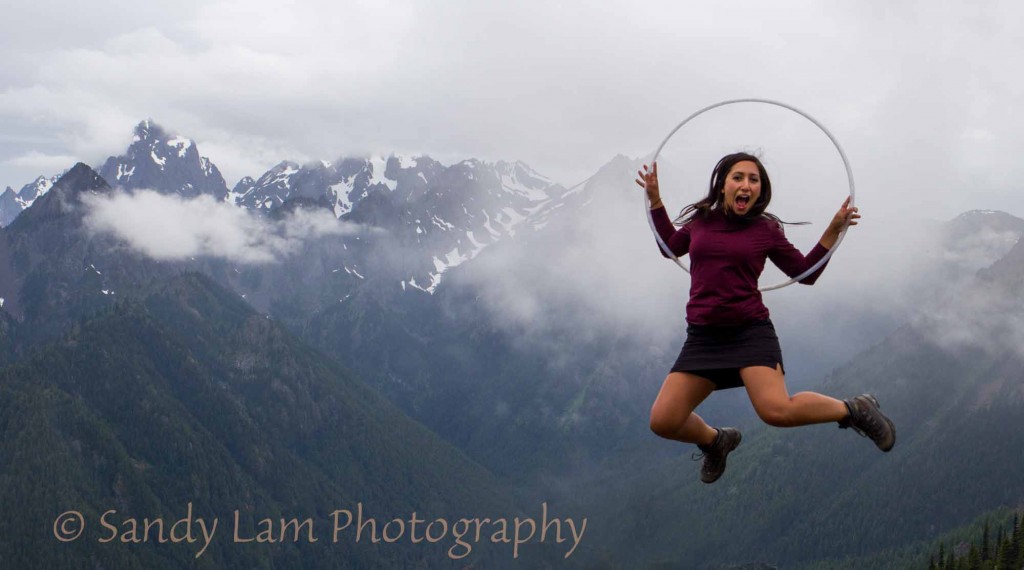 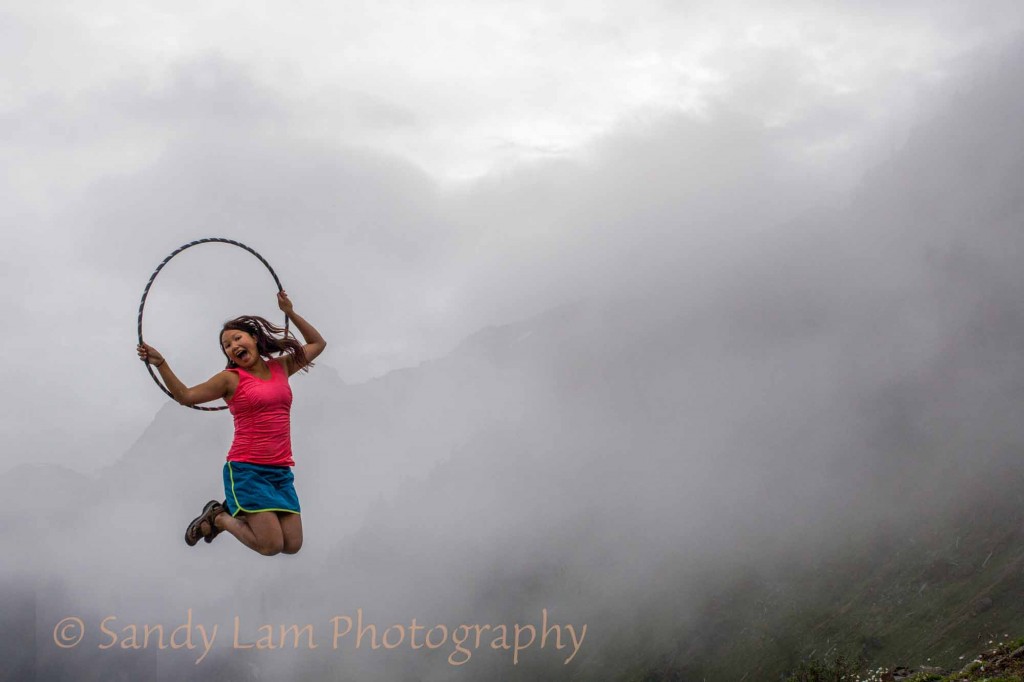 While I was disappointed with the lake itself (I guess I was hoping for a view more epic like Lake 22), climbing to the ridge was totally worth the trip up. Another satisfactory weekend in the mountains complete!!