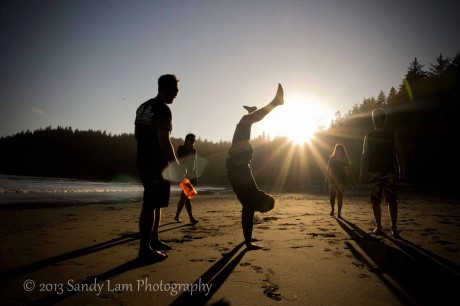 My first backpacking trip without a guy to depend on! Even though it was a short trip, I’m still proud of myself. Because if I can do it…any girl can! Organized by my dear friend Monica and her friend Arriana, accompanied by my old high school friend Courtney, we had a crazy awesome time! 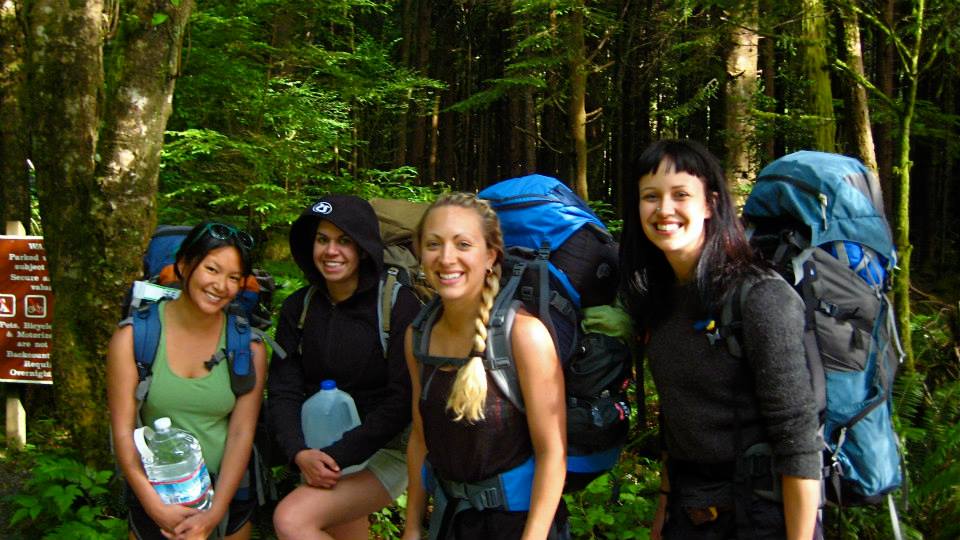 Me, Arrianna, Monica, and Courtney

While we originally wanted to head to Mount Rainier, we ended up on the Peninsula at Third Beach, just outside Forks (don’t worry no vampires). Of course we stopped at Crescent Lake on the way and I couldn’t resist a quick swim before continuing along the way. That clear aqua water just screams to be swam in. 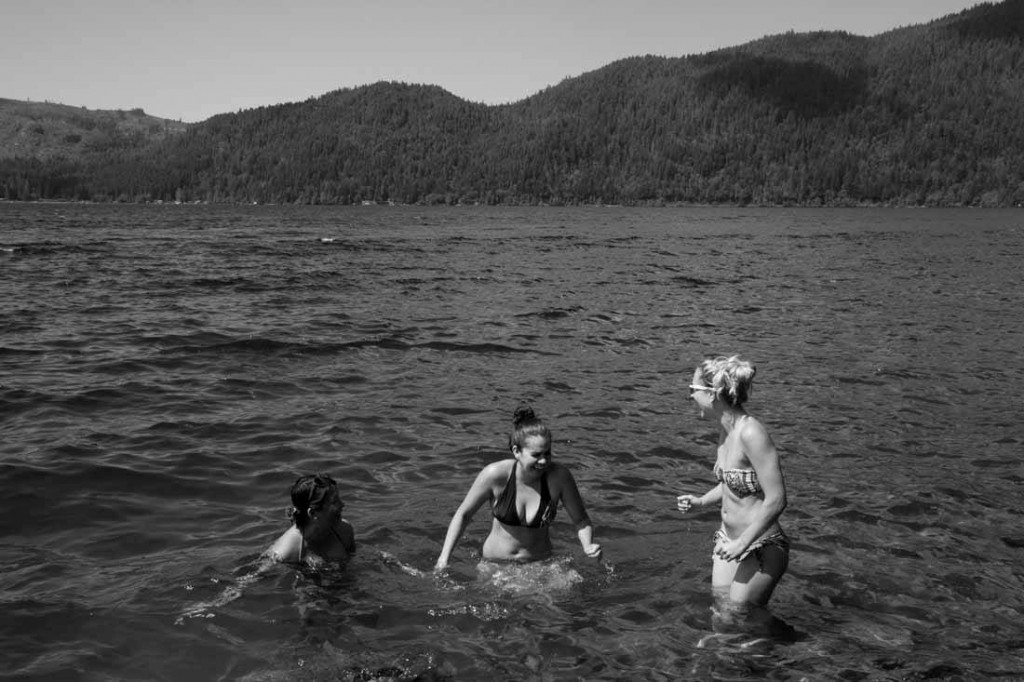 With an easy 1.5 trek in and gorgeous weather ahead of us, we expected a small crowd, but we were not expecting a whole brigade of boy scouts (or cub scouts…something like that). Lugging our paint buckets turned bear canisters and tons of extra water, we set foot on the trail. Luckily we found ourselves not to far down the beach a beautiful comfy spot. 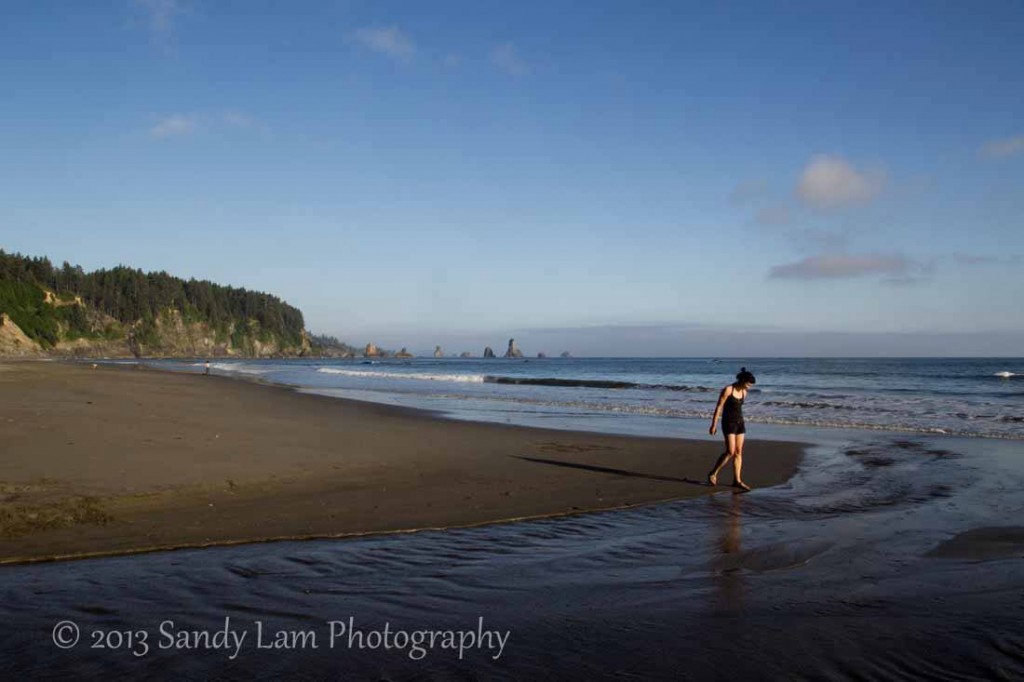 We got a fire and dinner started, and proceeded to chillax on the beach and wait for the rest of the gang. Our original intentions was to have a girls only trip, but we’re all more like guys and prefer the company of guys as well. So we made it in and set up camp on our own, that counts for something right? So the rest of our crew (4 guys and another girl) arrived sometime after 10:30 that night. Most of us had never met or met in passing before, so we all got to know each other before a big day of adventure. 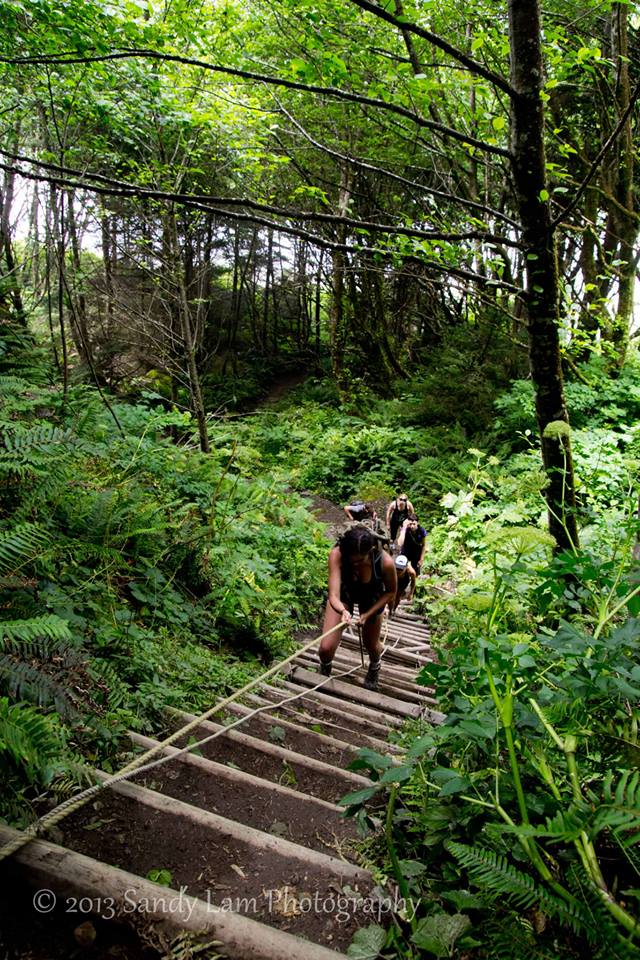 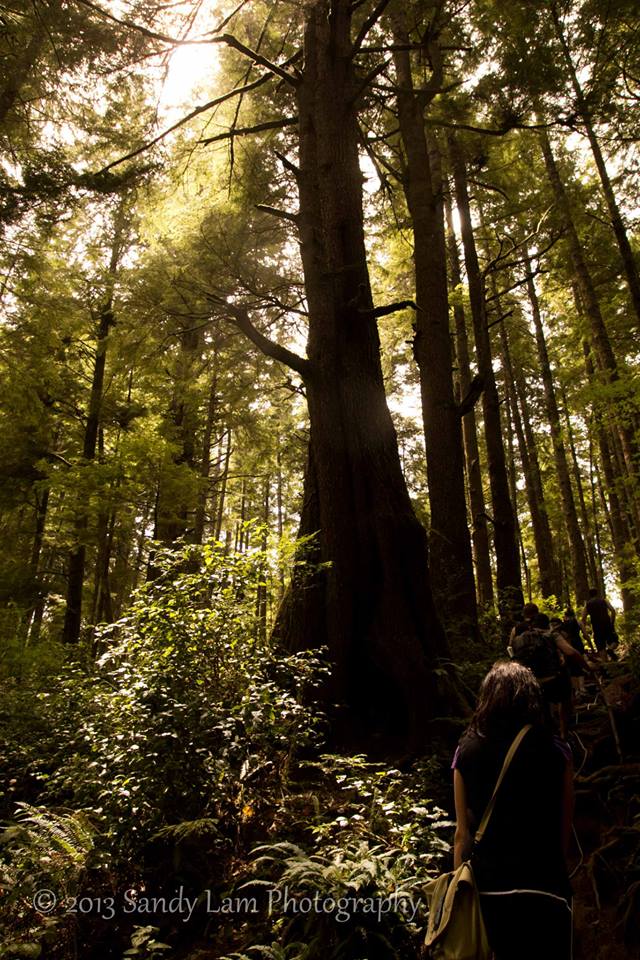 We climbed up some sketchy rope and driftwood ladders that made the 2-3 mile hike south of our campsite seem a lot more bad ass than it really was. The tress were cool, mossy and green and the views was spectacular. We explored caves, ran on the beach, and summer couldn’t seem any sweeter in that moment. 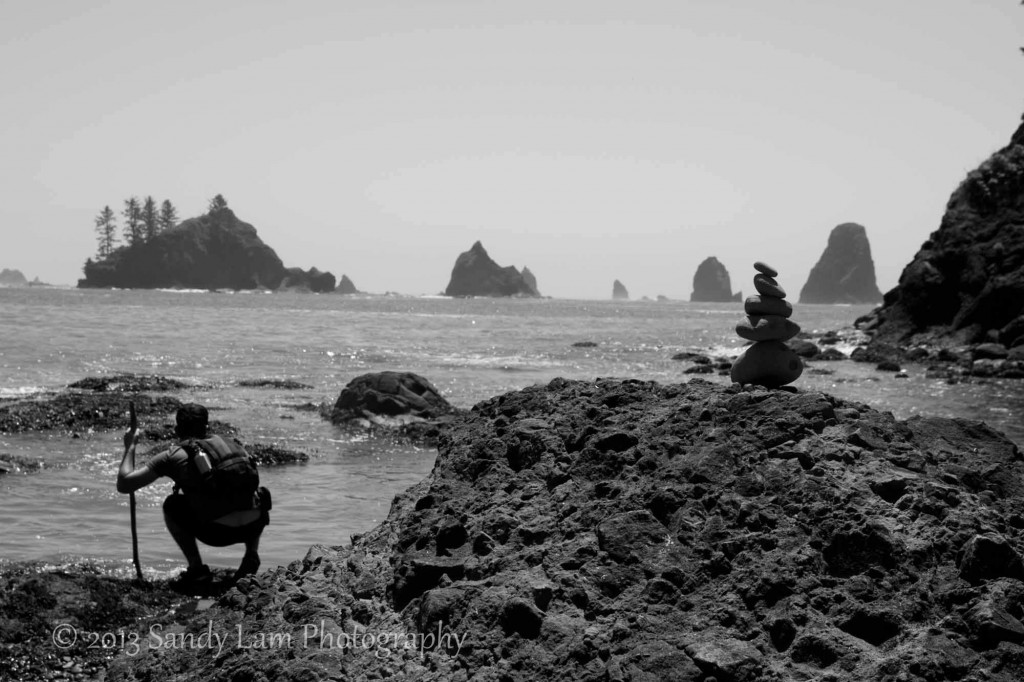 I even swam out to a rock to try some meditation and yoga. 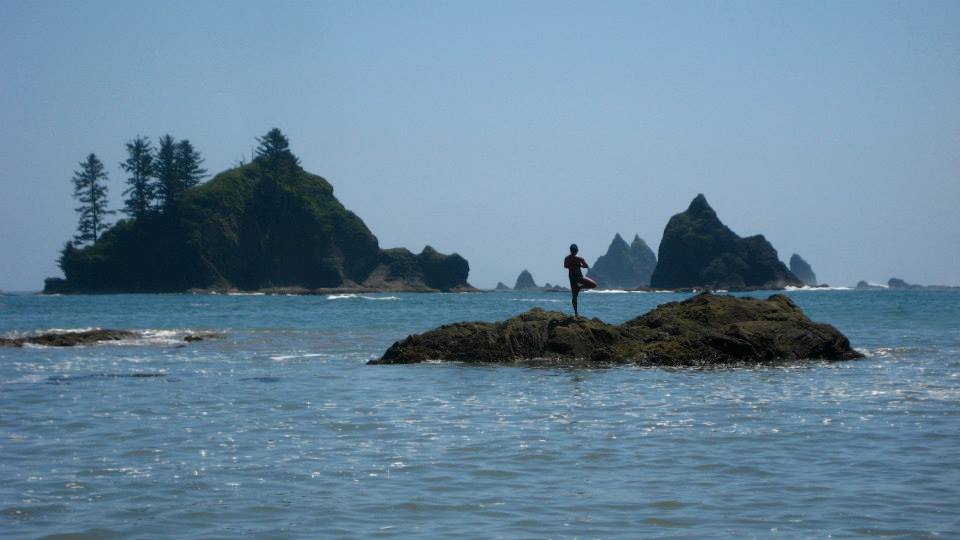 Being outdoors in nature puts me at the peak of my “hippieness”. I’m able to focus a lot more, and any emotional stress I’ve been carrying disappears during those moments.

As I swam towards this rock a couple hundred feet from shore, the rock became clearer and I quickly realized climbing onto the rock would be a lot more difficult with tons of starfish all clamored on the base. Carefully, I crawled and pulled myself up to enjoy the most spectacular view. If only I had a waterproof camera. But as I sat there with my eyes closed, the sun beaming down on me, and the ocean waves crashing around me, the stress I didn’t even realize I was carrying started weighing down on me. After some deep breathing, I finally let it all go with a final exhale and sat there for a moment longer before I opened my eyes. To my delight, a seal had popped its head above water about 10 feet or so away and I SWEAR it was staring at me. It might have been my imagination when I thought it gave me a wink before disappearing below the surface. Either way, my heart was full and happy, and after a couple yoga poses, I swam back to shore. 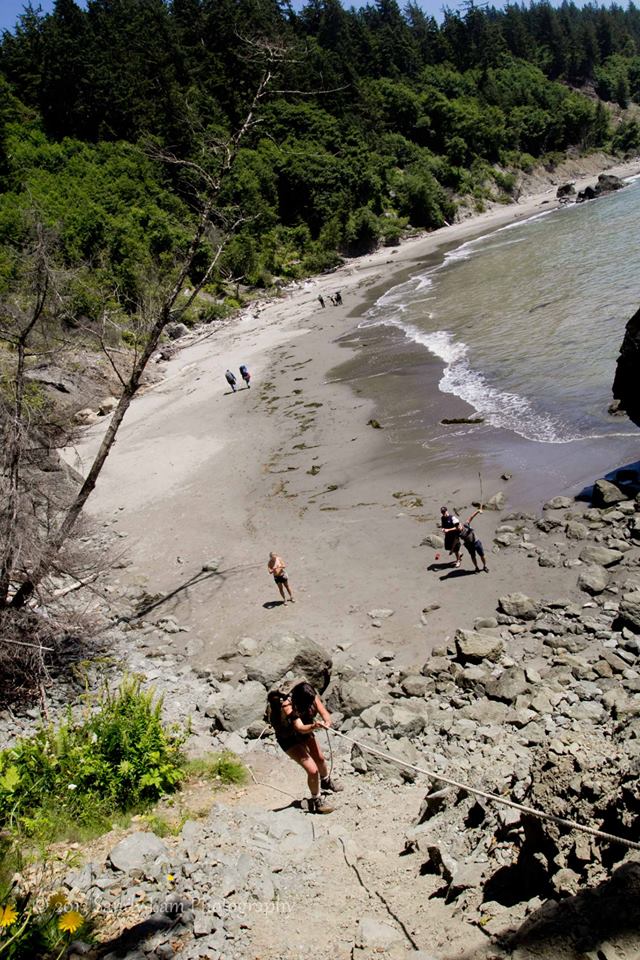 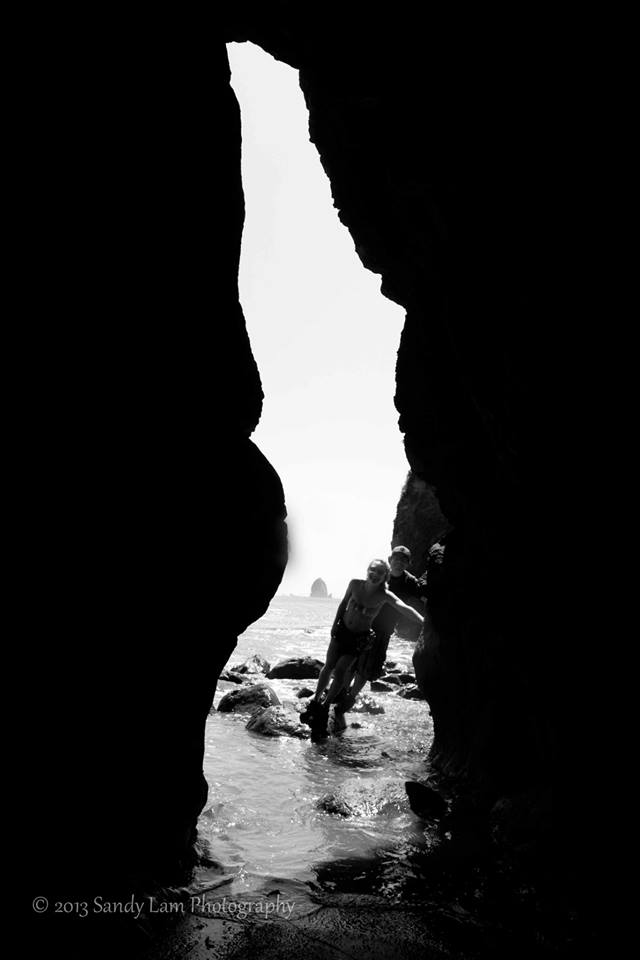 We made our way back to enjoy the rest of the afternoon on the beach frolicking and being silly. The best part was when we decided to take a sunset stroll after dinner (which was awesome easy mac with chili and fire roasted andouille sausage by the way…man I love short backpacking trips). 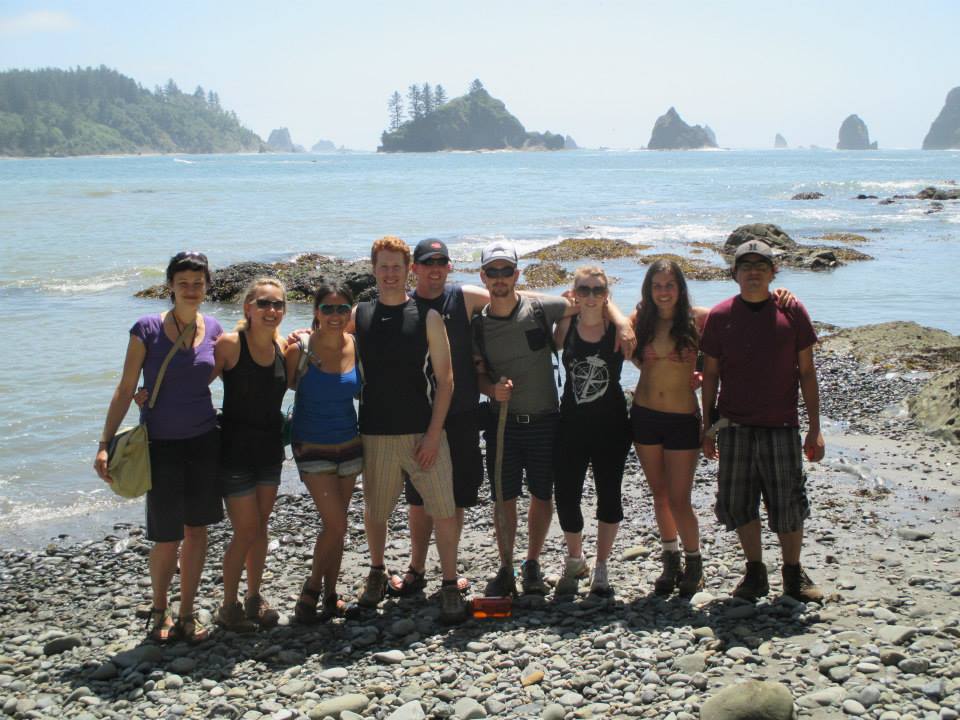 The whole gang all together! (Photo by Jason Harris)

As we summersaulted, handstand-ed, and skipped our way down the beach, I kept thinking my summer really couldn’t get any better than this. Laughing and playing in the sun on the beach. Miles from obligations, phone service, and technology. It was just us, the water, the sun, and the sand. 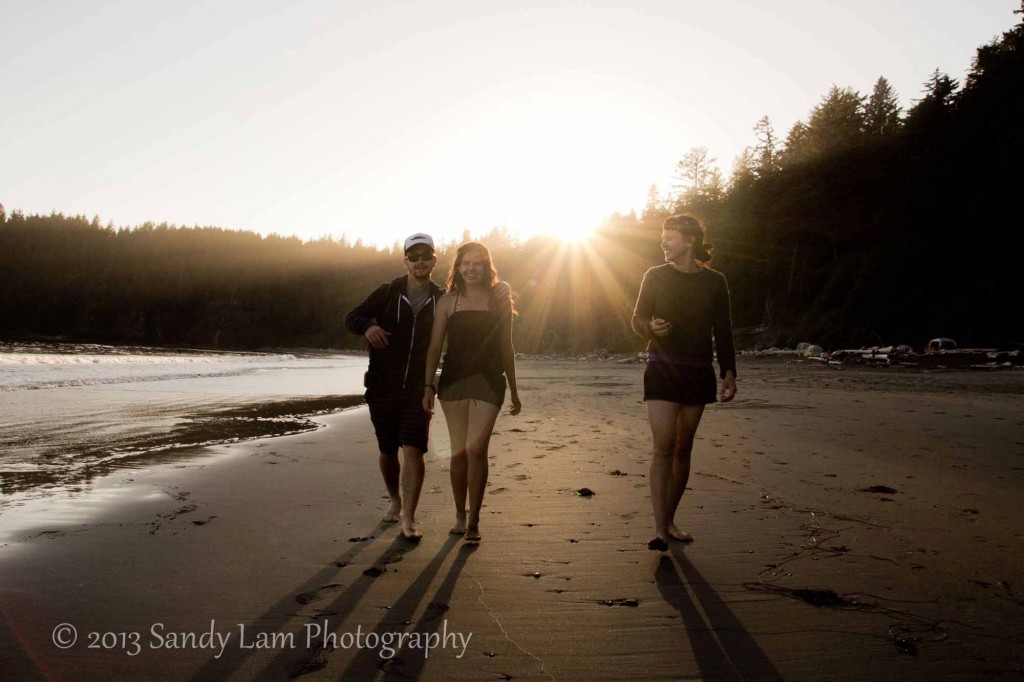 Unfortunately, I we were caught off guard when we stumbled upon a dead whale along. We had walked by it earlier int he day twice but it was so large and discolored we thought it was a tree trunk! I was a wimp and didn’t get near it, but Arianna performed a nice send off ceremony for the poor creature. Hopefully he/she is in a better place now. 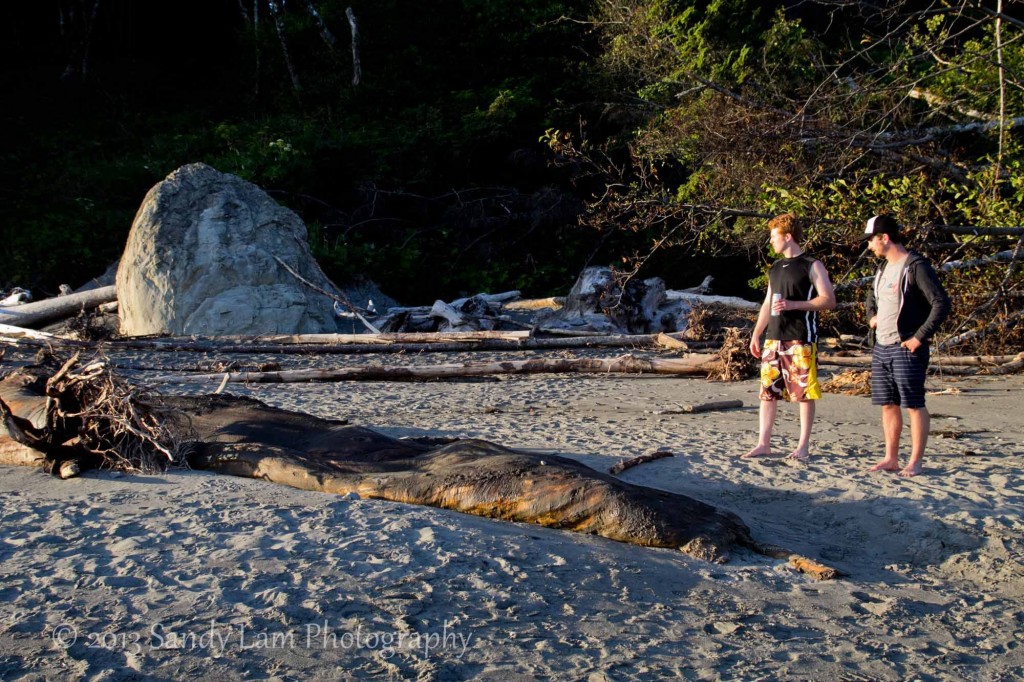 That grey lumpy thing on the sand that Chris and Paul are staring at is the whale.

We all reluctantly made our way home the next day. Luckily with MUCH lighter packs and good weather by our side. Courtney and I found a neat fort on the way out, and being the dork that I am, have to have my photo with it. I love forts. Maybe one day I should actually build my own. All and all, it was the perfect ease back into backpacking, with incredible friends and memories. I am so happy to be back in the Northwest!! 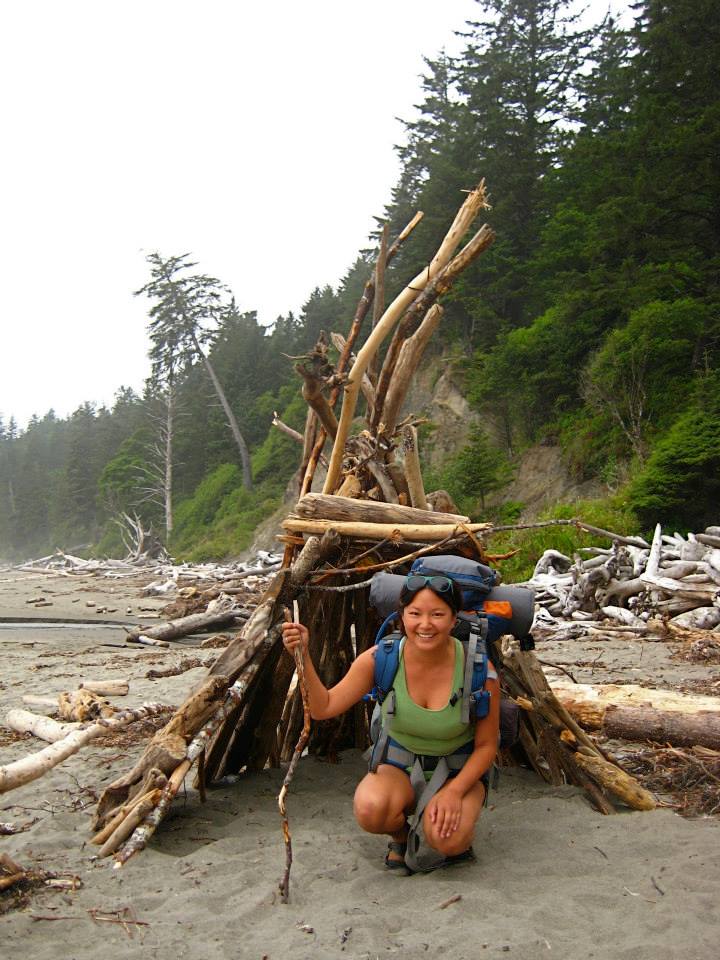