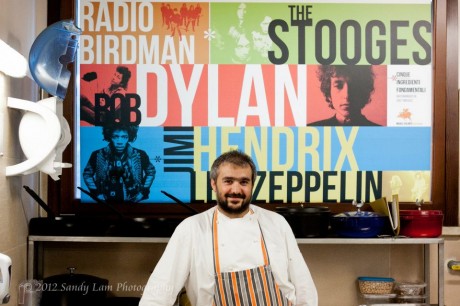 I haven’t been quite up on my restaurant reviews in Italy since I’ve been so fortunate to be able to have homemade Italian food twice a day. I haven’t explored the fancy places to dine, and for the most part restaurant Italian food doesn’t have the same warmth and comfort as the simple pasta or risotto dishes made at home. To be completely honest most of the places I have dined at weren’t really anything I felt worth writing home about. However, dining at an agriturismo has always been something worth writing about.
I’ve only splurged on two agriturismo dining experiences(read about Monte Freddo if you love meat), but both times, they have been hands down best food I’ve had in a while. My advice is, if you ever get a chance, dining at the farm you are staying at is the absolute best way to experience Italy. The food seems to always taste fabulous and you know exactly where you food is coming from.
Valeria and Corrado came to know of Maiale Volante when Andrea Tantucci, the chef wrote a book: Rockitchen. Andrea pairs the meals with wines as well and chose La Distesa as one of the wines. 30 recipes paired with 30 LP albums to listen to while you cook. Needless to say, he and Corrado became good friends after the discovery of their shared love of classic rock. Andre says he can’t imagine cooking without music and that both of these passions grew simultaniously together. After our meal Andre invited me to the kitchen , where a very large poster frame was mounted along the wall, encompassing his favorite artists (his “Five Fundamental Ingredients” for cooking.

Maiale Volante rocks a bit of a modern twist to the leisurely Italian lifestyle. Instead of a farm resurrected in a picturesque stone building, the restaurant itself is made out of natural building materials. It’s modern design filled with antique touches give it sort of a yuppie Fremont vibe to it, but I was loving it. It reminded me of home, except with better food and I was in the middle of the countryside in Italy. The menu changes each week, and the chef, Andrea whips up a tasty meal based on what his partner in crime, Roberto Sancricca (the farmer) has ready on the land. The animals roam freely throughout the town, I’m not sure how they keep track of them, but the belief of allowing the animals to choose what they take in is interesting. If the farm doesn’t have what Andre is looking for, it’s gathered from a nearby local farm. Here’s what we were lucky enough to have during our visit:
– Scrambled egg with broccoli, bacon and sapa
– Our meats
– Lentil soup bio Gino Angeloni and fennel
– Mancini Spaghetti Pasta with cabbage and smoked cacetto Piandelmedico
– Pork with herbs
– Red Hokkaido pumpkin cake and almonds cooked with wine cream and Tahitian vanilla
– The coffee Lelli Leonardo
The foods were paired with a spumanti, a white, a red, and a dessert wine. Corrado even got an extra bottle to take home with him. I’m not a sommellier so I’m not even going to pretend to critique the wine, but here goes the food: 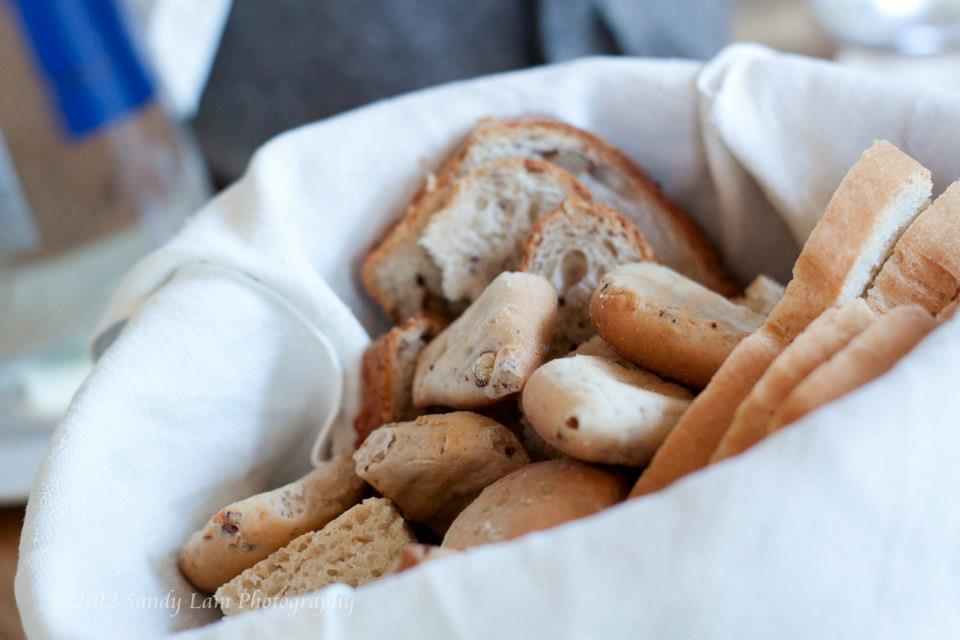 First, the BREAD. Oh my lord the bread. For me this was the best part. All throughout Italy I felt like nobody used butter in their bread. Or maybe i was just eating the wrong kind of bread. But the variety of breads in this basket were heavenly. Foaccacia, a white bread, and then an amazing honey wheat walnut bread. It had the sweet flavor of a banana bread, but the lightness of a regular bread. I wouldn’t be surprised if I honestly ate 90% of this bread at our table. I couldn’t stop.

Egg scramble with broccoli, bacon, and sapa – The scramble itself wasn’t particularly amazing, however the bacon and the brown sauce that was drizzled on was. I have no idea what it was but it was sweet and the slight saltiness of the scramble went perfectly with it. I could’ve eaten a whole pan of that. 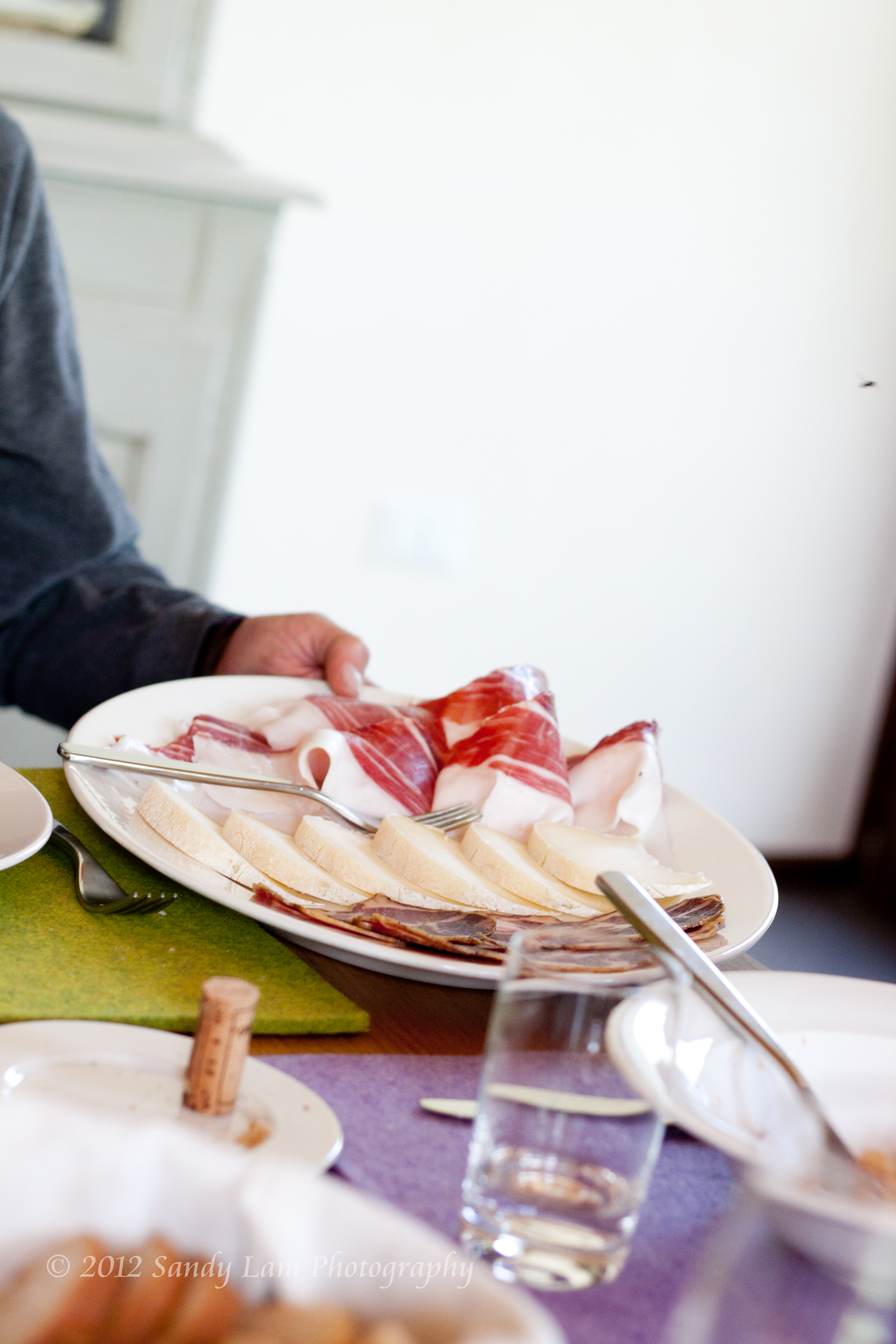 The meat platter was great. It was so fresh, I might dare say it was even better than Monte Freddo. The Prosciutto only had a slight saltiness and wasn’t overwhelming like a lot of the prosciutto I’ve had around Italy. The Copa (the salami looking one) had a great freshly ground peppery taste to it. Neither were too fatty, which is always my complaint when it comes to cured meats. It looked like there was a lot fat, but it didn’t taste as greasy or fatty as I thought it would. The best part is that neither were rubbery in texture either. Sometimes you get a sort of elastic texture to some cured meats, especially with prosciutto. The cheese was interesting as it came from the buffalo cows. It wasn’t too strong but still had some good acidity to the flavor. It wasn’t mind blowing on any level but the flavor went perfectly with the meats, and the bread I couldn’t stop eating. 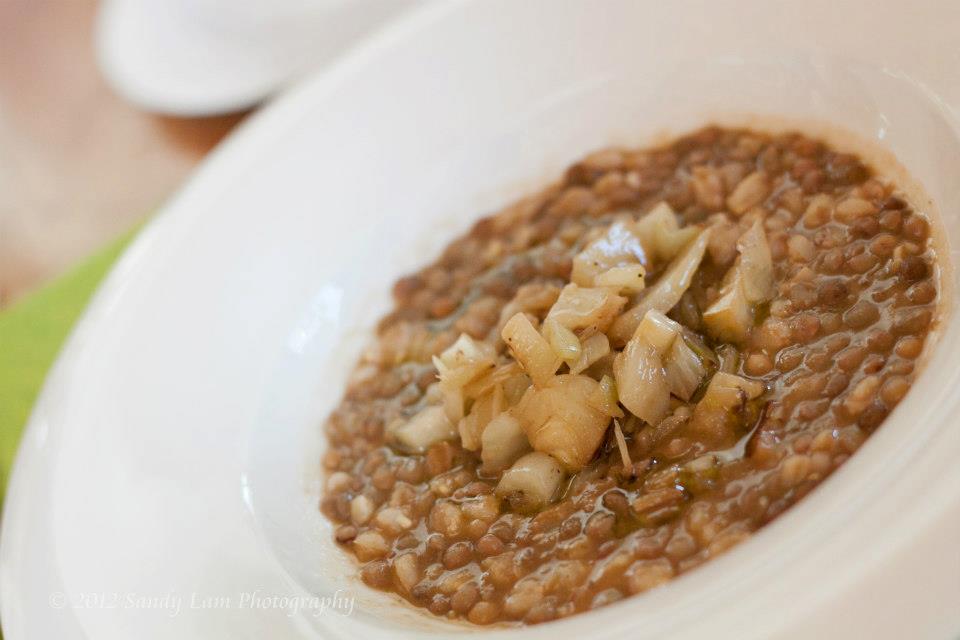 The lentil soup was the best lentil soup I’ve had by far. The sauteed veggeis on top included, onions, fennel, and cabbage. I believe there was some barley in the soup as well. It was definitely a hearty one with what I assume it a beefy broth. 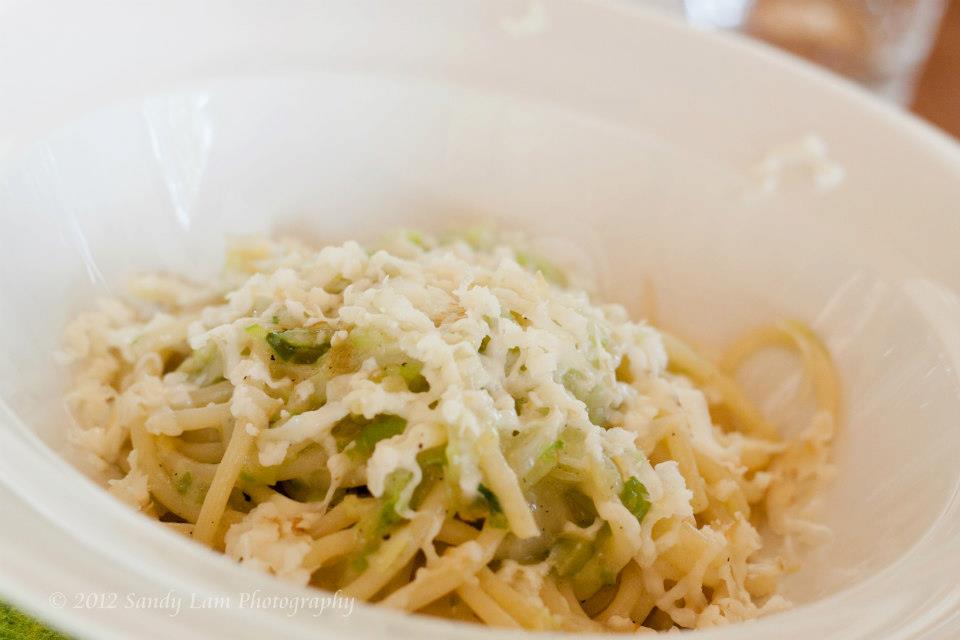 The spaghetti was an egg based pasta, more on the thickness scale of a linguini, and oh so rich. It must’ve been sauteed in butter because it was so savory it was hard not to just gobble it up right away. The green veggies are actually the outer green part of cabbage, which has a much more bitter taste to it. Paired with the cheese and ground black pepper, it was a great dish to follow the soup. Rich flavor but the portion was just right.

The pork was pork. I was the least excited about this dish unfortunately. I felt like the pork was a bit dry and the sauce drizzled over it didn’t add much to it. The veggies, I’m not what herbs they were, maybe parsley, were great. I’m not sure. I have mixed feelings about this dish. Maybe I was too full by this point. The Pork was fine, just not as tender as I had hoped. And the potatoes were too dry in my opinion. There wasn’t much body left to the potato inside. 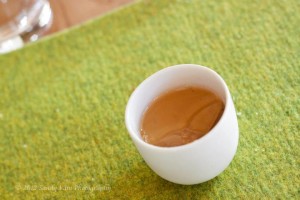 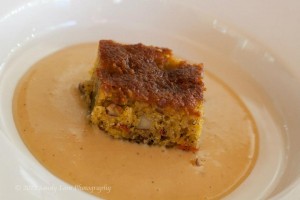 And what’s a proper Italian meal without just as many dessert platters as your entire meal before it? The little espresso looking cup to the left was heaven in a cup. I could easily eat a whole bowl of this. I’m not even sure what is is because it wasn’t on the menu. But it was some kind of amazing vanilla bean custard with something gelatinous over it. The cake on the right was similar to a carrot cake except made with pumpkin and almonds. Sweet, fluffy, and moist. The best part was the cream sauce surrounding it. Tahitian vanilla cream with a wine reduction. YES PLEASE. Drool. 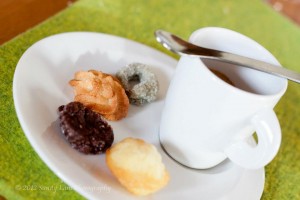 And as if those two desserts weren’t enough, they had to give us a bunch of cookies with our coffee. I of course had to sample them all. The mini madalines were the best. 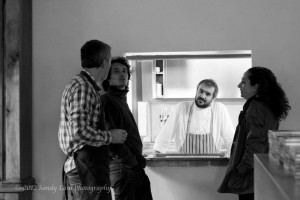 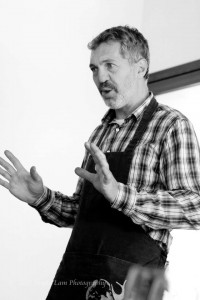 Valeria and Corrado chatting with the owners. The farmer is on the right. 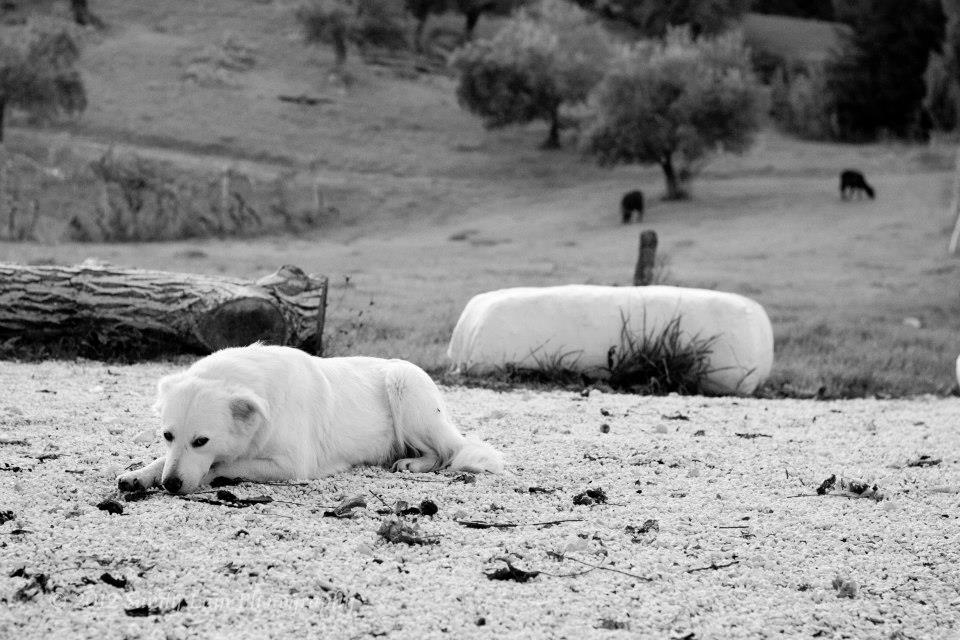 Farm dog that was way too sweet and reminded me of Janice. 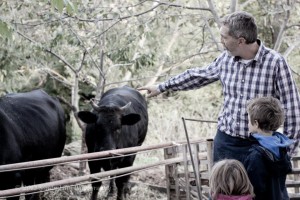 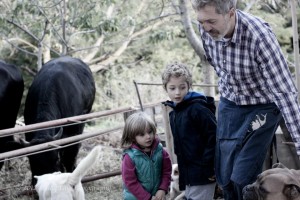 The children meeting the bulls! 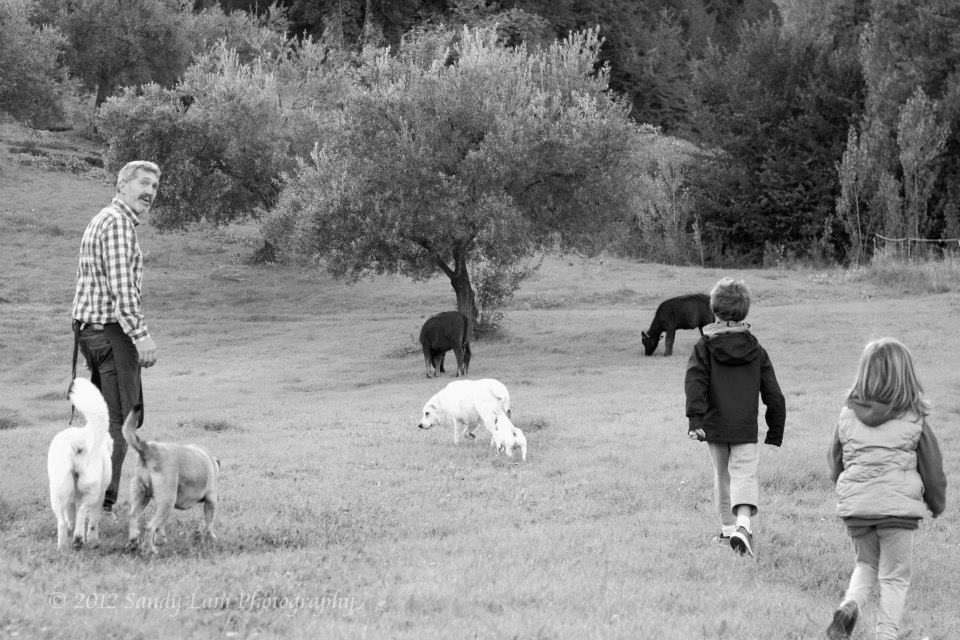 Now it’s off to meet the baby buffalo cows! 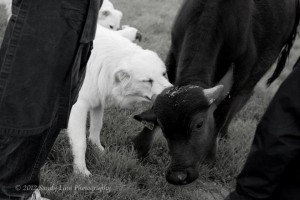 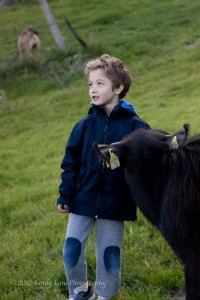 Such a beautiful experience. The restaurant is all of my favorite things. A place for family and friends (there is even a children’s play area), a place with a story to tell, and a philosophy worth sharing with others.
Thanks for the memorable afternoon Maiale Volante!