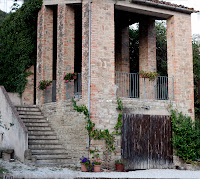 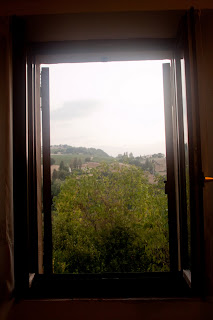 Ciao from Italy! Right now I’m relaxing in my little bed listening to crickets and the occasional bell chimes in the distance. It’s about 10ish p.m. My apartment has a view of the surrounding valleys and wineries, it’s beyond beautiful. I really can’t describe how amazing it is to be here (view from both of the windows above). Not sure what that brick building is but I went up the stairs and the top is a patio with a cool looking clay oven then. It’s seperate from the house. 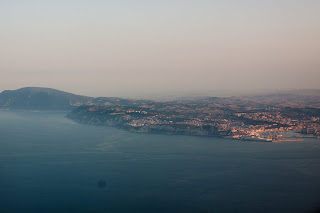 So 20 hours after my first take off from Sea-Tac…I made it. Barely. For some reason my last plane cancelled my reservation (pretty wonky considering I checked in 19 hours earlier…). So they weren’t going to let me on but after a whole lot of angry Italians a frantic stewardess let me on. I felt pretty cool being shuttled to my small plane where I got to walk up the stairs into the plane. It was almost like my private jet. I can pretend anyway. The above picture is a plane view of Ancona, the coastal city I flew into (about 20 minutes from the winery).

My hosts, Corrado and Valeria, are a beautiful Italian couple I would guess in their late twenties or early thirties. They have two beautiful children, Jackeau (I know I totally butchered that, I’ll figure the spelling out later, age 5) and Julia (age 2). I am pretty sure the only thing that seeing those children kind of makes me want to have children. Obviously not now, but 2 little kids with curly sandy blonde hair speaking Italian is seriously the CUTEST thing ever. 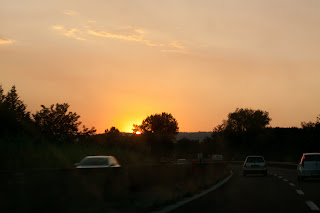 So Valeria was so sweet, she picked me up at the airport. We drove home into the sunset…pretty phenomonal. And we pulled into La Distesa. It is exactly how I imagined it would be. Straight out of Under the Tuscan Sun. This gorgeous quirky home is sort of set apart like a duplex. Corrado and Valeria live upstairs towards the back and the apartments for WWOOFers is up another set of stairs facing the entrance of the winery. We have a shared bathroom and kitchen to ourselves. Which by the way, the kitchen is the cutest thing on earth. It has a stone fireplace with a cast iron pot. It basically reminds me of what Cinderella lived in. 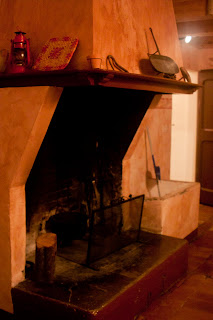 Turns out this vineyard used to belong to Corrado’s parents. He and Valeria moved out here 10 years ago to take care of the place and produce wine. They mostly produce white wine, and some olive groves. I just found out I will probably be able to help with the olive harvesting as well so I am really excited for that. I thought I would miss out on it because it’s normally done during the winter months. But apparently it has been unusually warm this year. And Cupramontana, the town we are in is well known for the wines that are produced. I am so excited to learn more.

I learned there will be two more WWOOFers joining me tomorrow, both are also American. Valeria and Corrado speak great english, but I am really excited to start learning some Italian. The children are so precious, the little boy wants to learn English so I am sure we are going to have some good times coming up.

I had my first homemade Italian dinner. It was perfect. I also learned that apparently they eat their meals backwards from us. Sort of. We started with some simple spaghetti noodles with olive olive, peppers and garlic. Then had some sort of sauteed pork with an assortment of veggies which included some kind of mushroom that apparently grows in the wild that you can go forge. Might have to try that before I leave. Then came the salad and then came the dessert (which was a pie crust like thing with a fig like jam on top. We of course had some wine. I laughed with Corrado asked me if I liked wine. It was a delicious white wine that he produced. I’ll have to get the name of it….Everything is in Italian so it’s hard to remember. I didn’t take photos because I didn’t want to creep out my hosts right away. But hopefully soon!

I am having a wonderful time already. I can’t imagine what is in store for me next!