Long story short: I didn’t cook much this week. But here you go! 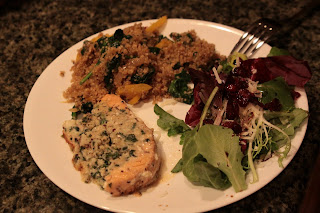 It’s a Trader Joe’s salmon roullette stuffed with spinach florentine. I made my favorite spinach quinoa (pronounced keen-wha) dish with it…but it was a bit too much protein…but incredibly filling. If you don’t know what quinoia is…it’s the must wonderful superfood. Tasty and nutritious, this almost grain-like source that has all 8 amino acids. You can use it in place of grain foods (I usually substitute for rice or pasta). The best way to describe it is that it’s pretty much like a hearty cous cous. Anyway, the following is a recipe: Although it doesn’t have to be followed to a T – because I just make it up the proportions most of the time.

* Add broth, black pepper and red pepper flakes to skillet; bring to a boil. Cover skillet and reduce heat to low and simmer for 13 minutes; stir in spinach. Cover skillet and cook until spinach and quinoa are tender and liquid is absorbed, about 3 to 5 minutes; season with salt. Yields about 1/2 cup per serving.

The salmon was just thawed and sauteed with some white wine and garlic. Delish for being frozen!

Meghan decided to put her sushi skills to the test the other night. We make a pretty good team. Tempura Sushi is sooo good. 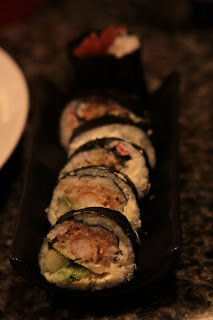 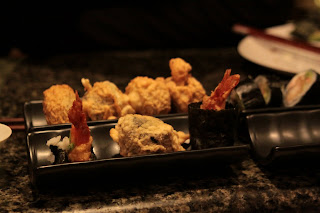