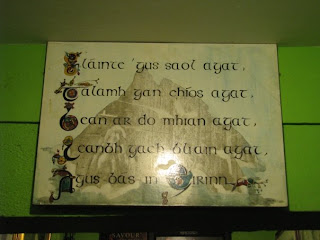 Oh Ireland…how I miss you…

Hands down, I could move to Ireland in a heart beat. At the last minute I decided to put together an Irish meal for a few friends…some bailed so there was quite a bit left over…but mmm so good. 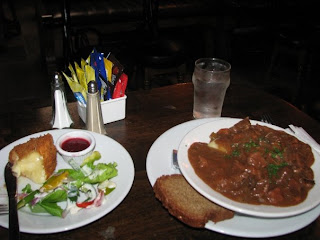 First off – I had Beef and Guinness Stew EVERYWHERE in Ireland, I ordered it any place I got a chance to. The above picture is the first I had of it at fantastic pub in Doolin. Next to it is Deep Fried Brie..if you’ve never had it…I can’t even begin to describe how incredble it is..I could probably eat that by the pound…mmm….(View a few pics of the places I went and the food I ate there here)

I got the recipe for tonight’s dish off of Food Network. It seems relatively easy enough. I did all my food prepping the night before since I only had a couple hours before dinner once I got off work and needed every minute of it! 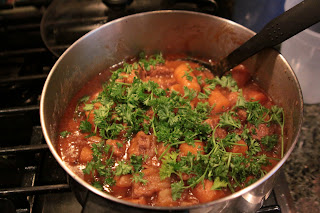 After reading the recipe it sounded like it would be incredibly thick, and I just didn’t think there would be quite enough Guinness. I also thought it was odd there was no beef broth. So I modified it by adding beef broth, potatoes, and more Guinness. I’m glad I did. It came out perfect. Extra hearty. 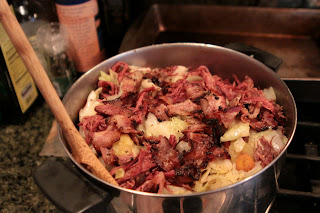 In addition to this delicious stew, I made Corned Beef and Cabbage…I browsed a few recipes and then sort of put some together. I bought uncured cook Corned Beef Brisket from Trader Joe’s because they were sampling it and it was great. Seemed easy enough. I prepared it with a head of cabbage, applewood smoked bacon (HIGHLY recommended),potatoes, carrots, celery, all purpose seasoning, a little bit of beef broth. Mmmm it was delightful. I’ve never had corned beef and cabbage but my friends who have said it was very tasty. So that’s good. 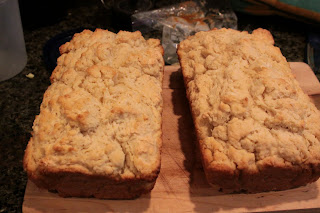 Last but not least. Beer Bread. A simple mix from Trader Joe’s (that they also sampled…) that you just mix with any 12 oz. beer. I first made this for Ben in addition to the homemade chicken noodle soup one day. And I’ve discovered it tastes much better with a stronger beer. The don’t remember what I used the first time but it was a dark beer. This time, I used a Belgian beer (it was all I had until everyone came over with Irish stouts…). Either way – this bread is DELICIOUS! It is incredibly hearty – dense and is crispy flaky on the outside (due to lots of butter you pour on the out side when you make it.

And voila, and Irish meal (I wasn’t sure how many people were coming or that I could afford to feed, so I kept this simple). I’d like to try Shepard’s Pie sometime…I’ve heard so much about it but have never eaten it. Sounds tasty.

After dinner we jetted over to Kell’s, which is a great secluded Irish pub in Downtown Seattle in an Alley by Pike Place Market. I had never been before, but for a first time visit – I was very pleased. The place was packed (well for a $20 cover – I expect it to be great). Everyone got a free t-shirt – apparently Kell’s throws a week long celebration, so I’m glad I was able to experience the heart of it. I was very excited to have some Magner’s Irish Cider. Not as great as Bulmer’s, but I have yet to find that in the states…I miss it so much. The night quickly evaporated into hours of crazy Irish jigs with a live irish band that was actually from Ireland. Real accents and all. Eamon Maguire, is apparently a famous drum maker in Ireland. I befriended him last night when he tried to set me up with his nephew who was also in the trad group. They were really quite fantastic. It really made me miss Ireland…one day..I’ll be back.

Until then – I guess I’ll just keep going to Kell’s.