That is to say…Happy New Year in Vietnamese and Chinese (my two heritages). This entry comes about a week too late…but I figured better late than never.

February 14 was Chinese New Year this year…if you want to learn more about how this is the Year of the Tiger, I’m sure you can Google it. There are plenty of amusing sites out there with all the same superstitions and stipulations that my mom still keeps very much alive to this day.

Any way – this is hands down my favorite holiday (that is – until the day I get married). It’s all about food..and receiving “lucky money”. Lucky money is money in special red envelopes that “adults” give to “kids” to share their wealth and hope to bestow upon them some luck as well as some luck for themselves. At least that’s my understanding of it. I wouldn’t totally trust myself since I am pretty much a banana/twinkie, whatever you want to call me. So the day I get married is the day I’m considered an “adult” which is fine by me, because this makes up for the lame taxes I have to pay after college!

I thought I would share some highlights from my Chinese New Year..because food…is ooohhhh so good.

My mommy’s slightly modified version of a Beef Chow Fun. She’s still using rice noodles, they are just in little funny shapes. It reminds me of asian noodles trying to be Italian and bite size. 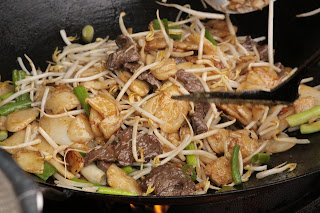 Mmmmm so delish! It’s greasy but so good. And that’s what tea is for right? (My mom always says that jasmine tea is supposed to help “melt” the grease away)

This is my mom’s modified version of Drunken Noodles, or Pud Kee Mao…depending on what Thai restuarant you go to. It’s a blend of rice noodles, garlic, basil, onions, bell peppers, egg, beef, and lots of sauces and spices. Mmmmmm…

So on Chinese New Year’s Eve, my mom makes a bunch of food, and we offer it our ancestors as a prayer sort of thing. We’re not allowed to eat it until we’ve finished praying multiple times, and it’s very difficult with so much delicous smelling food! And yes…that is a whole chicken with the head still on. My mom says that things are meant to be whole on Chinese New Year, like we can’t cut things off or it’s bad luck. I’m not really sure where this superstition comes from but she also won’t cut hair or sweep the house or do laundry on the day of the new year and for 3 days following. I’m not sure why really…I just do what she says. 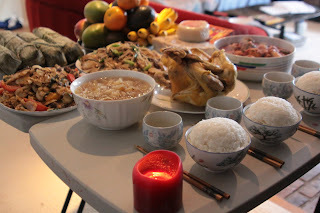 The table is set!

On the day of Chinese New Year, my mom and I went to a temple some close family friends own and started a long morning of cooking…lots of lots of food. Those noodles aren’t even all the noodles we used! 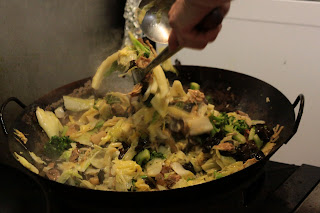 Mixed veggies…on the day of New Year’s we’re not allowed to eat meat…not sure why other than you’re just not supposed to.

Then the chinese dragons came out! Traditionally, these dragon dances are done at all temples to bring the temple good luck in the coming year.

Apparently the dragon eats lettuce and throws it into the temple. My dad says it’s for good luck. Apparently anything you do for this day is all about luck. So back to food… 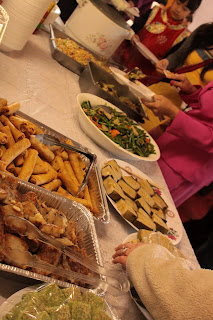 Well I guess there isn’t much else to show. We continued to cook and cook and cook. It was a wonderful morning/afternoon.