The Tim Tour of London 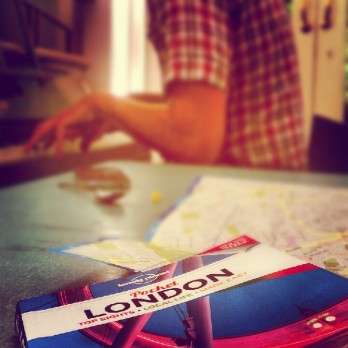 So for those who don’t know, I met Tim while I was in Turkey. I was looking for ideas for places to explore before I had to return for work in Italy and he suggested I come to London since the city was all decorated for the Olympics. London had always seemed like such an obvious place for me to visit that I almost never thought about it. This seemed to be my moment and my calling, so I got a ticket and off I went!

View from the skylight of the room I stayed in.

If the sound guy/documentary thing doesn’t work out, Tim could probably make a decent tour guide. He was a gracious host for my first visit to London and made sure I was safe and prepared. Upon my arrival to London, he met me just outside the train platforms, and had an oyster card (the basic and easiest way to pay for traveling around London…it’s like an Orca card for folks back home) loaded with money ready for me. As soon as we stepped onto the escalators to catch “The Tube” (aka underground subway system) he was already shaking his head at me as I failed by standing on the left side (a big no-no). I’ve only been in a subway system once before in New York a couple years ago, and the London system was overwhelming at first, but then I realized how amazingly easy it was to read the map an figure out where to go. The transportation dork in me was amazed at how simple it was, when 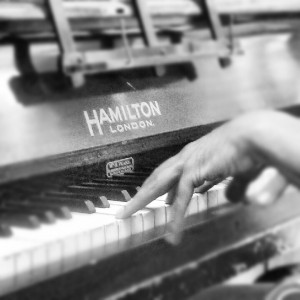 Seattle can’t even get their transportation straight. That evening was the start of my English food adventures as Tim’s friend taught me some traditional english sayings and traditions. Friendly banter over beer, football, and music, was a perfect way to spend my evening.

My first morning would also be the start to probably one of my favorite parts of visiting London. Every morning timw ould dabble on his piano during breakfast, which made it pretty difficult for me to motivate myself to get out and explore. I spend the whole day listening and talking over coffee/tea. Unfortunately TIm was busy packing and getting ready to move so he couldn’t accompany me. Instead he drew me a walking tour map that even included notes like “Good view” and tips like “Don’t pay, but go inside”. Haha. 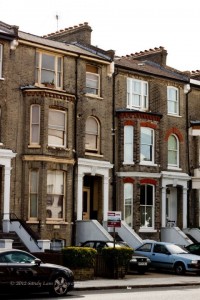 Once I stepped out I was feeling pretty good and was excited. The weather was on my side, it was sunny and beautiful. It felt AMAZING to feel the sun and not sweat for once. I felt like I was home again in Seattle with mild temperatures. I fell in love with just about every London neighborhood I saw. The architecture of the homes were just like I had always imagined they would be.

The Tube was easy enough to navigate and when I popped out of the station, I was immediately greeted by Big Ben. It was actually quite intimidating, and hauntingly beautiful.

And despite all the tourists, I actually didn’t mind them so much. Maybe because I was expecting the be surrounded by them in such a large city at such an infamous site. I made my way around it to visit Westminster Abbey. Got a closer look at the Houses of parliment as well. The architecture of these buildings took my breath away. If you ignore all the tourists, you feel like you were transported into  history book. Caught a glance at the police in their funny looking tall hats. As I made my way over the Westminster Bridge, I looked back and admired the Houses of Parliament from afar. I couldn’t help by smile to myself as I walked around the city. Despite the fact I had never been here before, everything felt so familiar. After being away from home for some time and the major culture clashes I experienced in Turkey, it was incredibly refreshing to just feel this way. 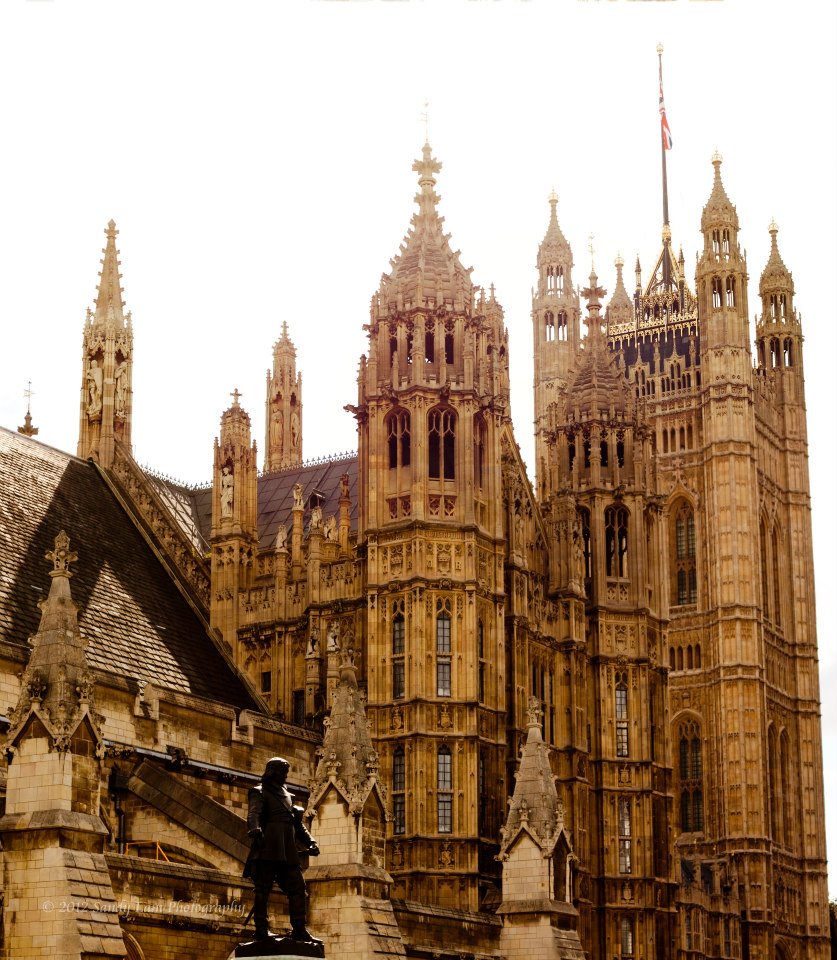 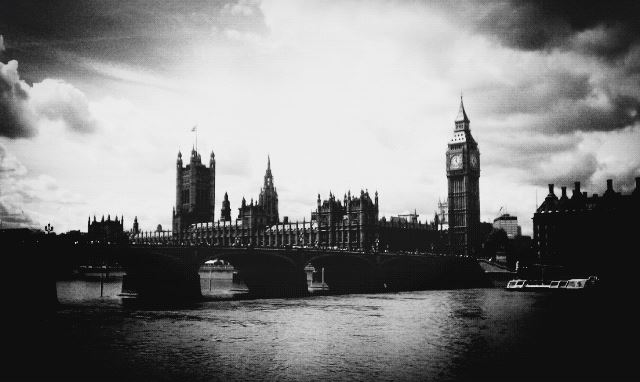 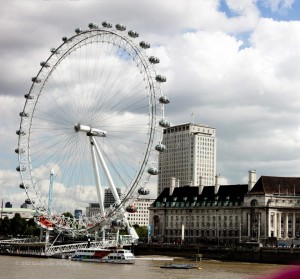 the southbank area was nice to walk through although a bit cluttered. It’s also home to some of the qwirky art. 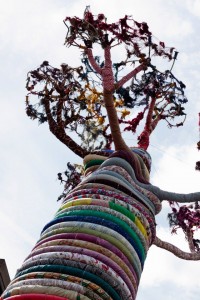 Loving the London buildings after crossing the Waterloo Bridge.

The Sommerset House was showcasing a photo exhibition as a tribute to the Rolling Stones 50th Anniversary. 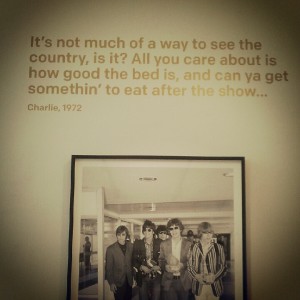 A major arts and cultural hub, showcases films and concerts in the summer, and an ice rink in the winter. It is still my dream to ice skate outdoors in New York just like in the movies, but London would satisfy that need as well. The photos were beautiful to say the least and reinspired my motivation for photojournalism.

The Sommerset House setting up for a film showing. A longer walk along the Victoria Embankment. All the locals on their lunch break enjoying a moment in the sunshine in their business attire looking out at the river.

As I crossed over the Blackfriars Bridge and entered a tunnel, I could hear some beautiful string music accompanied by an accordian. It almost felt like a scene out of Amelie, but not exactly french. Found some buskers, Reminiscence Quartet, playing a lovely tune. I had to stop and listen for a bit, and of course took some of their music home with me. They could use a little more pizzazz and smiles, as they seem rather intense, but either way I still enjoyed their music. 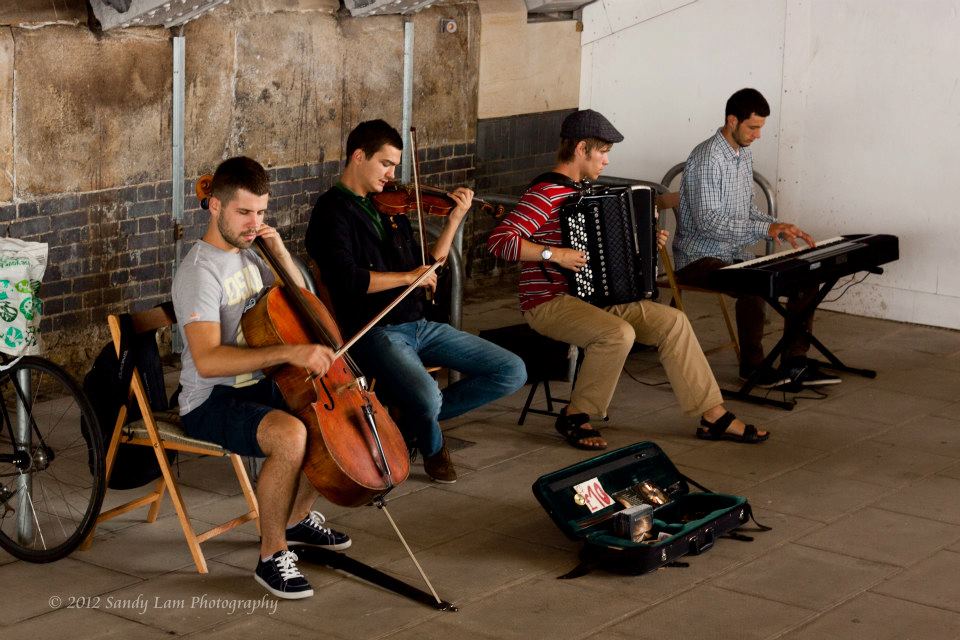 Here’s a recent video of them playing in the streets:

I only quickly stopped at the Tate Modern, thinking I would head back on another free day since I can spend hours in a museum, and wanted to make sure I got to the Borough Market before it closed around 4 p.m. The Millennium Bridge was a bit odd. I loved crossing over all of the bridges this day because each one was so different than the one previous. I didn’t like the Millennium Bridge as much because on the Tate Modern side of it there was strange space music playing with a creepy woman’s voice reciting something…I didn’t like the feel of it although I think it’s just a personal taste issue. 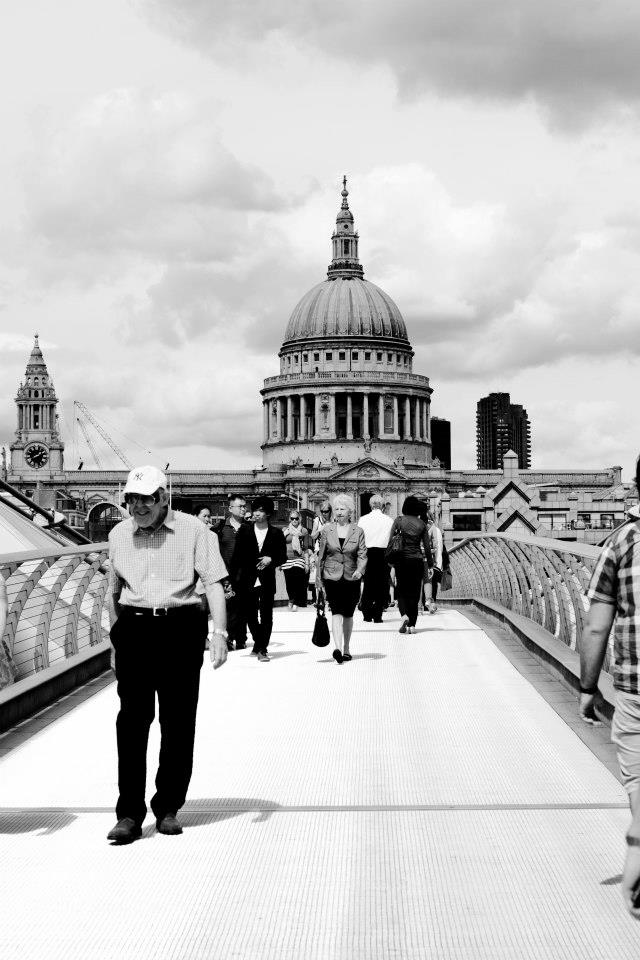 Tim’s notes told me to go inside although paying wouldn’t be worth it, however I wasn’t sure how to get around that as there was a guard posted at the door. So I just walked around the outside and back over the Millennium Bridge. 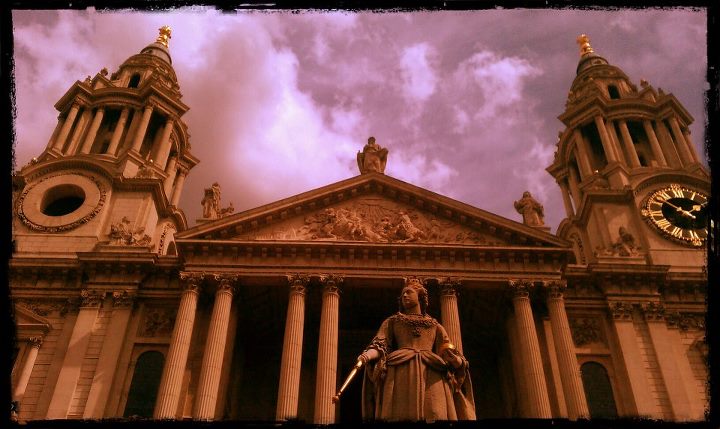 I love the contrast of the modern and old buildings throughout London. It’s so amazing to see a city filled with so much culture, diversity, and history. Walked by the Shakespeare’s Globe and saw this awesome funny sign outside: I was eager to get to the Borough Market first because I was worried it would close before I got there, and two because I was told it was a food lover’s paradise. I fell in love with it. I have so much to say about it with so many more photos, I’ll have to include another entry to accompany this, but it was definitely the highlight of my day. 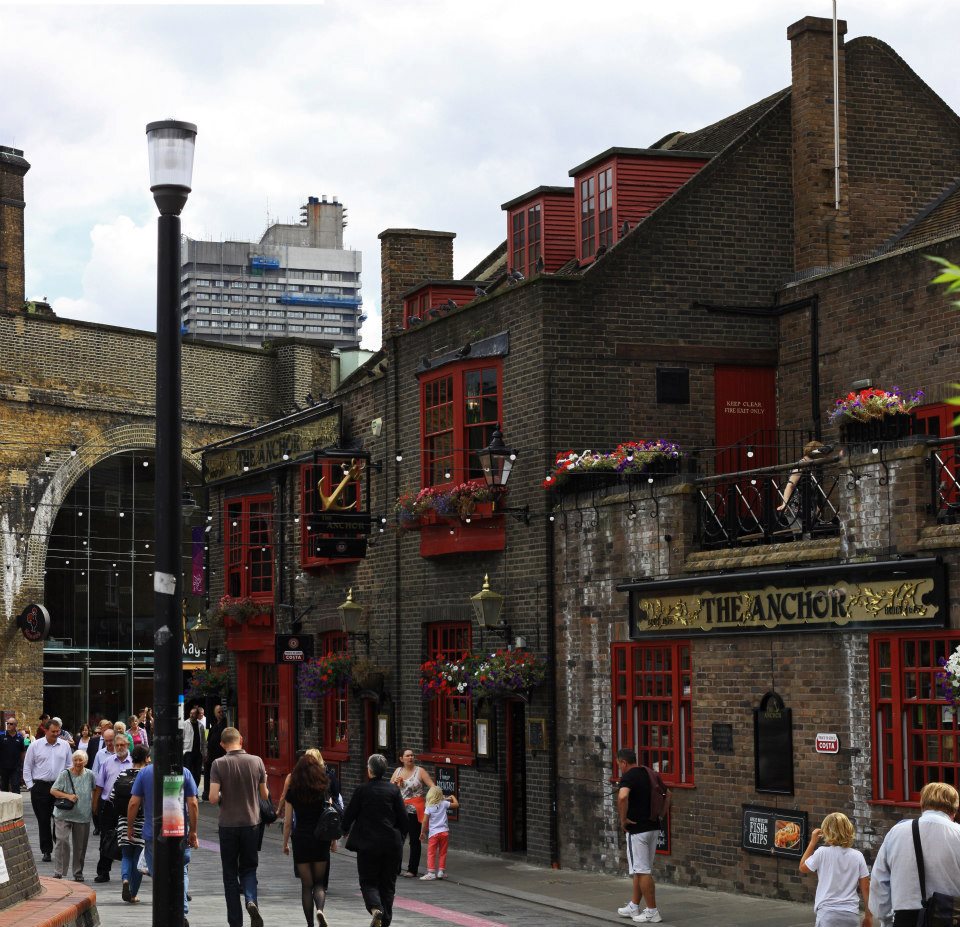 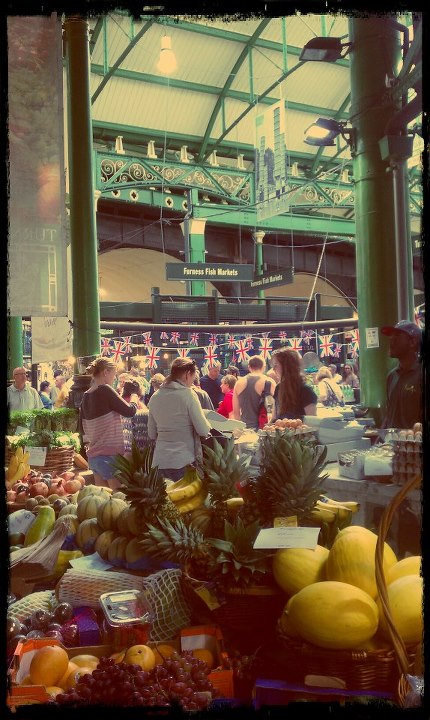 After spending a good solid two hours in the market, I slowly dragged myself across The Queen’s Walk and over to my last destination on the Tim Tour, the Tower Bridge. By far the most beautiful bridge along River Thames. Just on the other side was the Tower of London, which was recommended to me from friends who had been there previously, but I was ready to pass out after gorging at the market. So I plopped myself on a bench outside of the Tower and people watched, nearly literally falling asleep on the bench. 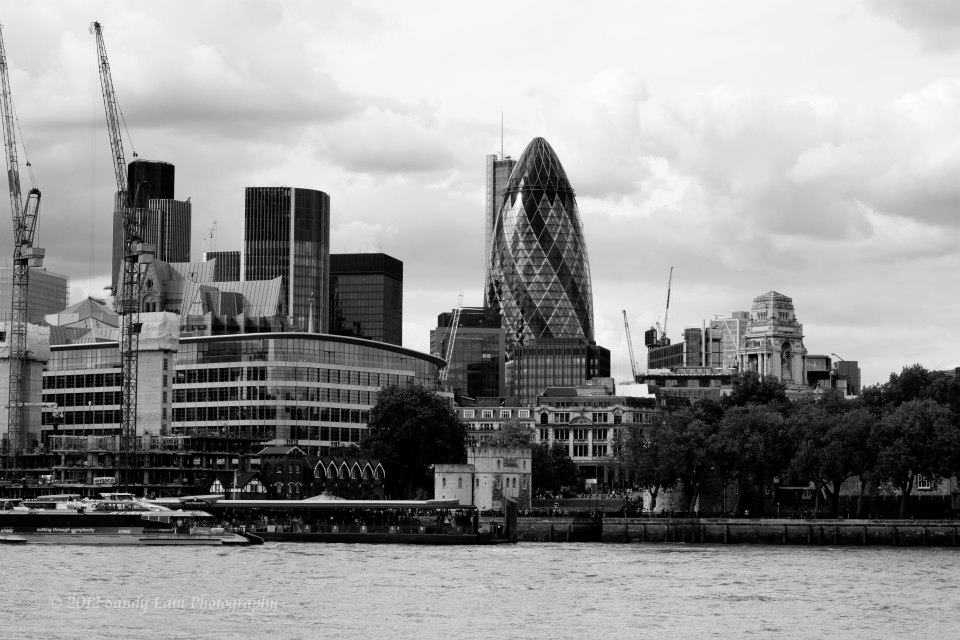 Another great scene with the contrasting buildings. 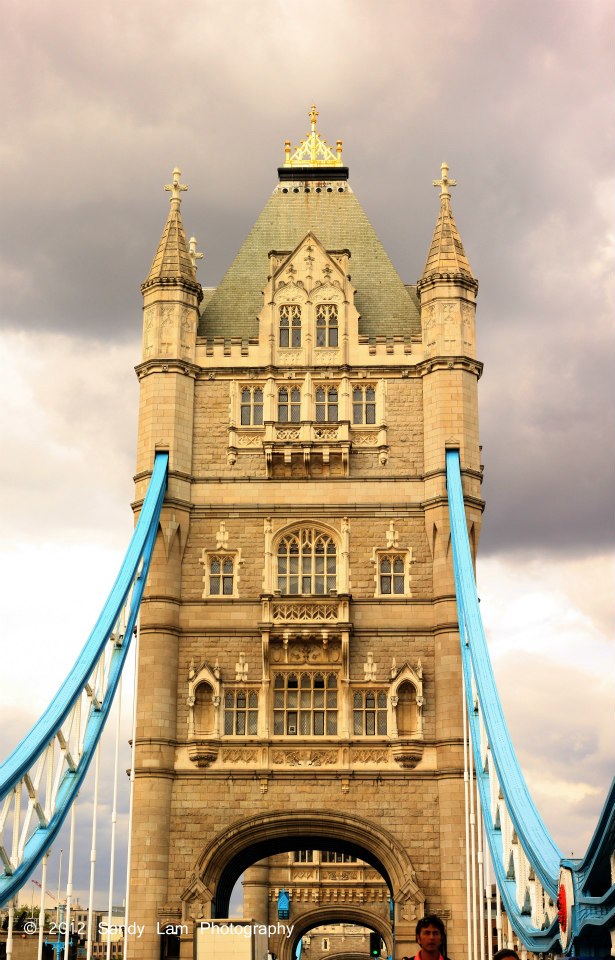 It was a lovely tour  that I thoroughly enjoyed. While I didn’t go inside anything, I didn’t really feel the need to. I was perfectly content just exploring with my camera. London has so many activities to offer for anyone, I knew I could spend days and weeks exploring the city and still never soak up everything.