After spending the morning swimming in Taormina, Giovanni, Lisa, and I went to explore the ancient greek theater of Taormina. 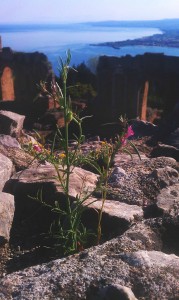 This was quite a different experience. I went for my first Gonadola ride from the parking lot to reach the town. That was exciting and terrifying at the same time after Lisa told us the story about US fighter jets that accidentally cut down the cables of a gondola carry Italian skiers in the Dolomites, killing everyone on board. But lucky for me, I lived through it.

Before I even got the the gates of the theater, the streets were filled with students, tourists, and other cheesy tourist traps. And for a whopping 10 euros (more than I spent on lunch and granitas that day), I found myself among the large classes of students, an English retirement group, and other tourists. Irritated to say the least, I made my way quickly around the theater trying my best to avoid the crowds.

Taormina’s Teatro Greco (Greek Theater) is one of the most famous ruins in Sicily because of the well preserved remains of the theater as well as it’s location. From the very top of the theater, you can see the beautiful coastline of Sicily just beyond the walls of the theater. The theater is 250 meters above sea level and approximately 109 meters in diameter. 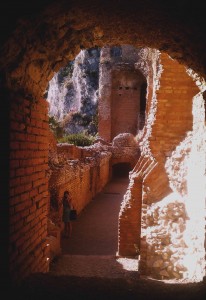 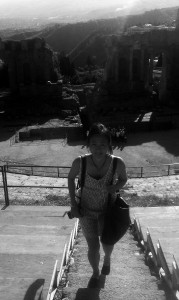 Despite the crowds, there were brief moments of peace inbetween the large groups, and the upper section of the theater was a bit quiter. 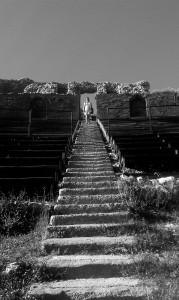 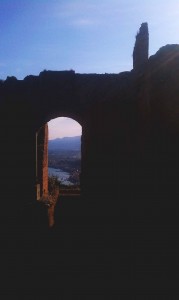 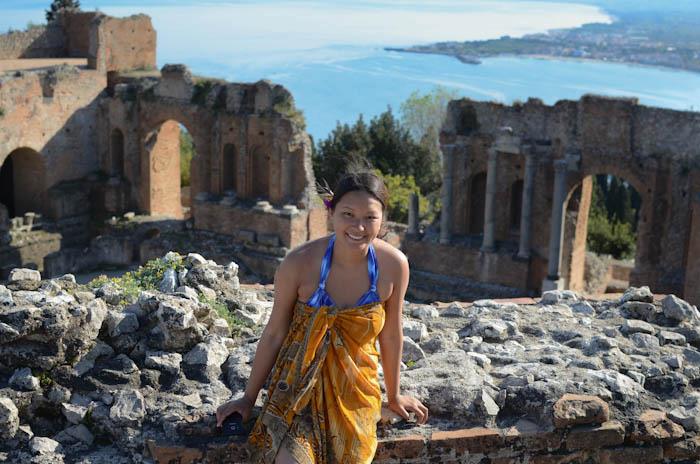 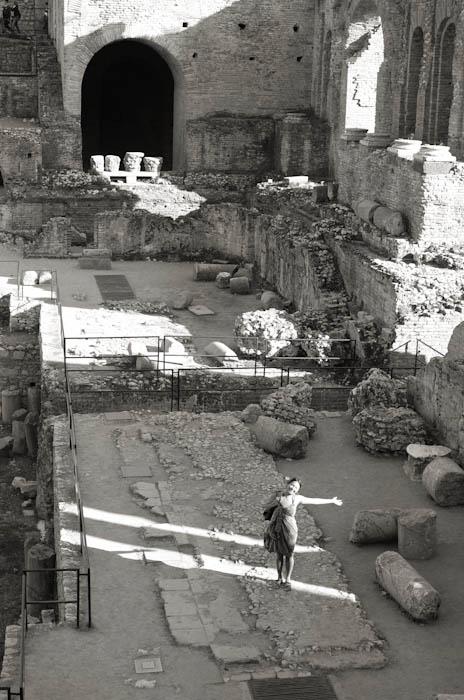 It’s hard to pick what my favorite part of Sicily was (I think it was Etna for me), but Agrigento certain provides the best photo memories. The lighting and sky was perfect that day. Whatever makes the sky blue, was working overtime that day. The contrast of the greek temple in ruins with the blue sky made it easy for my terrible phone to get some great photos. 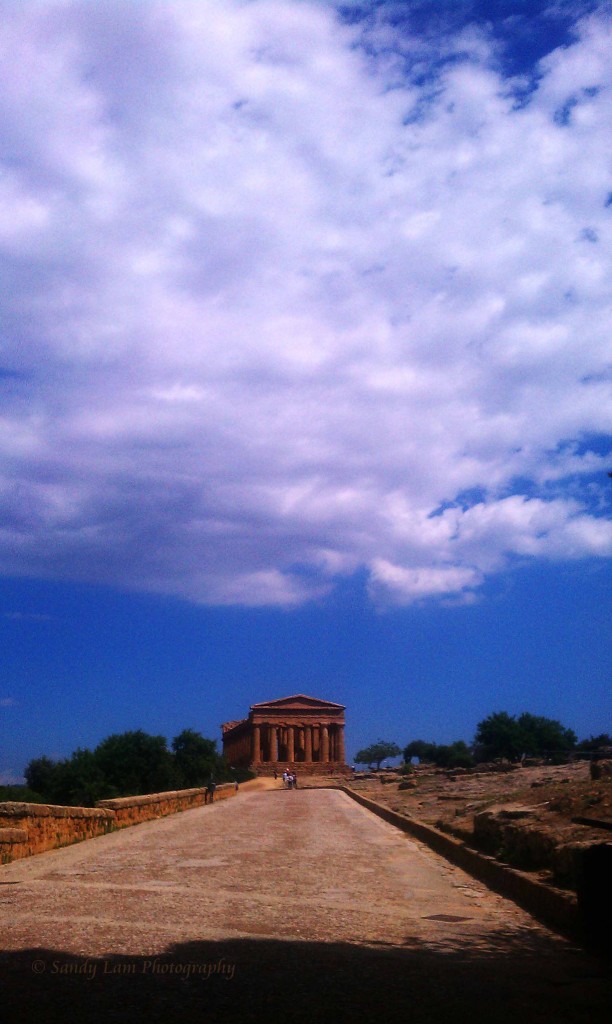 Agrigento is on the southern coast of Sicily, and we made a small detour on our way back to Marsala to break up the long drive back from Etna. We only stopped in the famous valley of temples (Valle dei Templi) for a few hours but it was totally worth it. Some say it’s one of the best preserved examples of greek architecture. Definitely the largest in Sicily with seven preserved temples in the area. Only a few of them remain as truly remarkable structures, and despite the tourists, it was a very quiet day. There were moments where we were the only ones at the temple and we could take in the sight without screaming children or a german tour guide gabbing away in our ears. 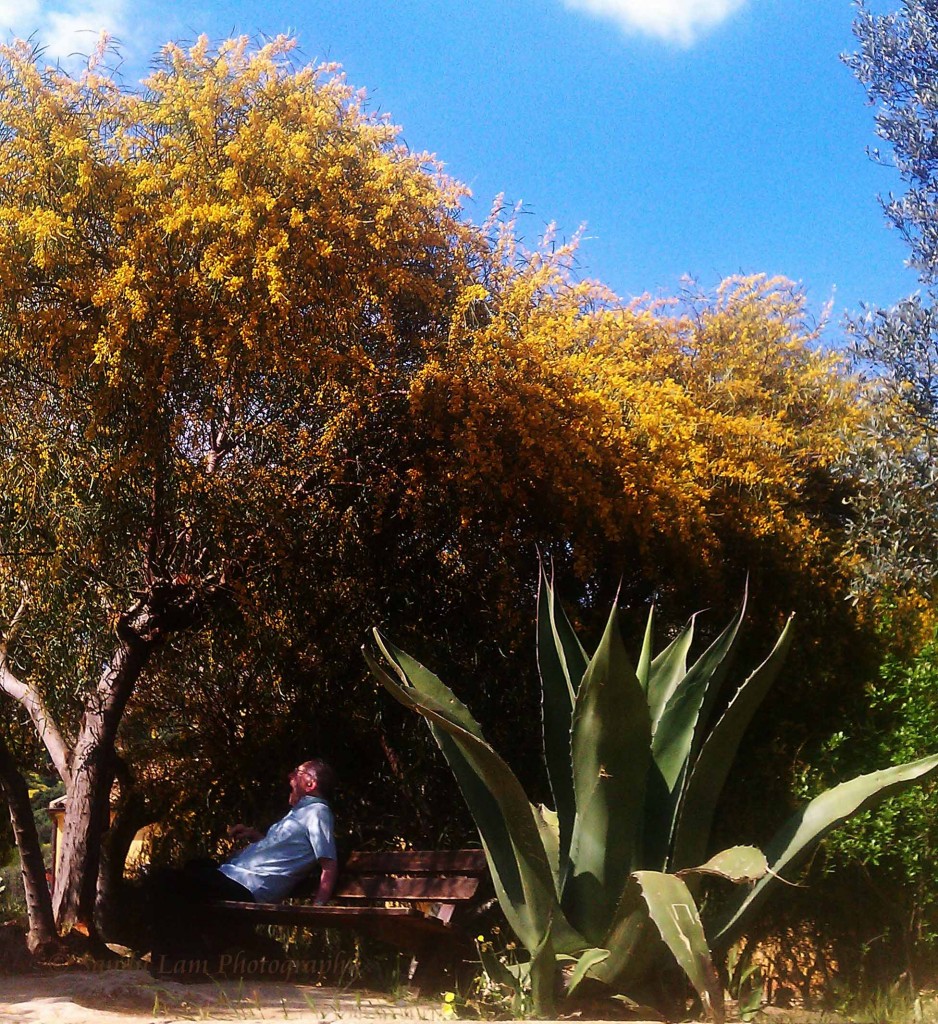 This was only 8 euros to enter, and in my opinion much more worth it than the greek theater of Taormina (if I had to choose). But it was HOT (33 celcius/91 farenheit) I can’t imagine what it would be like to be here in the summer during the height of tourist season. I felt like an old person stopping in every spot of shade I could find while exploring the different temples. 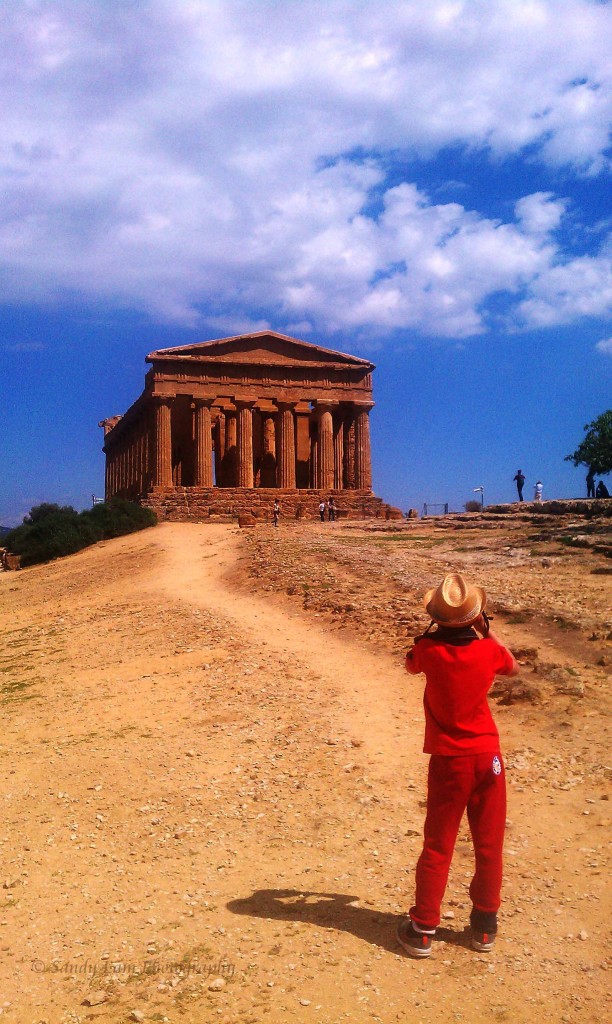 Giacomo photographing the Temple of Concordia 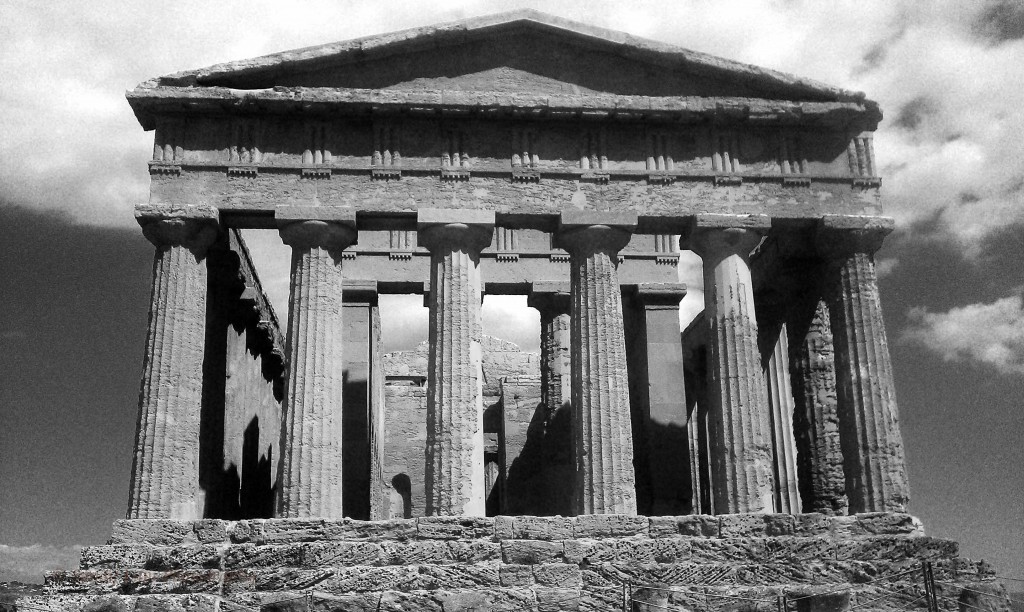 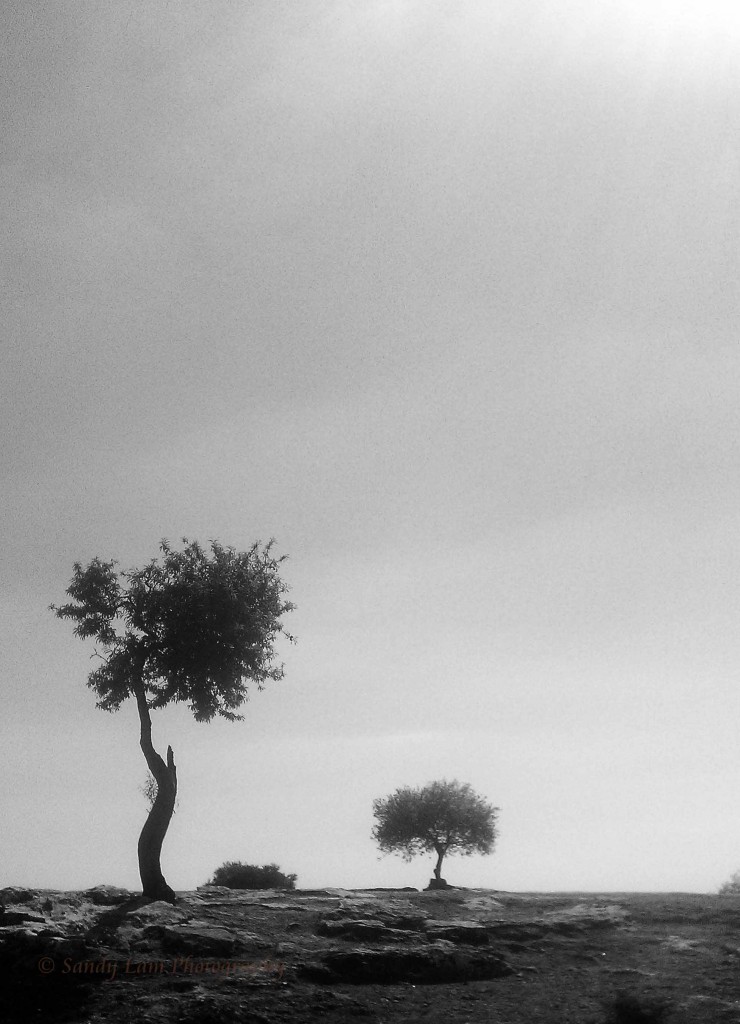 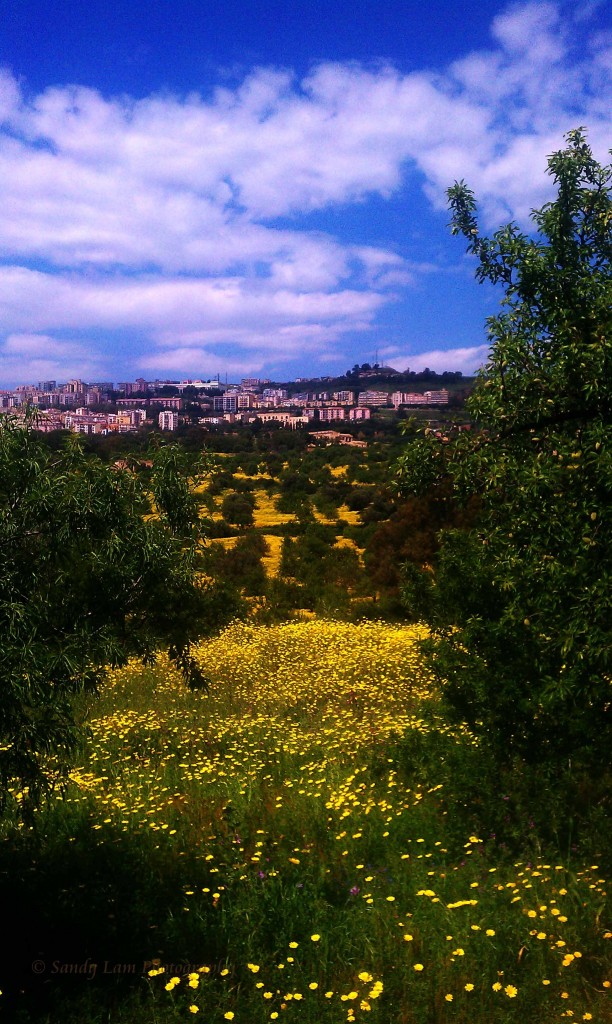 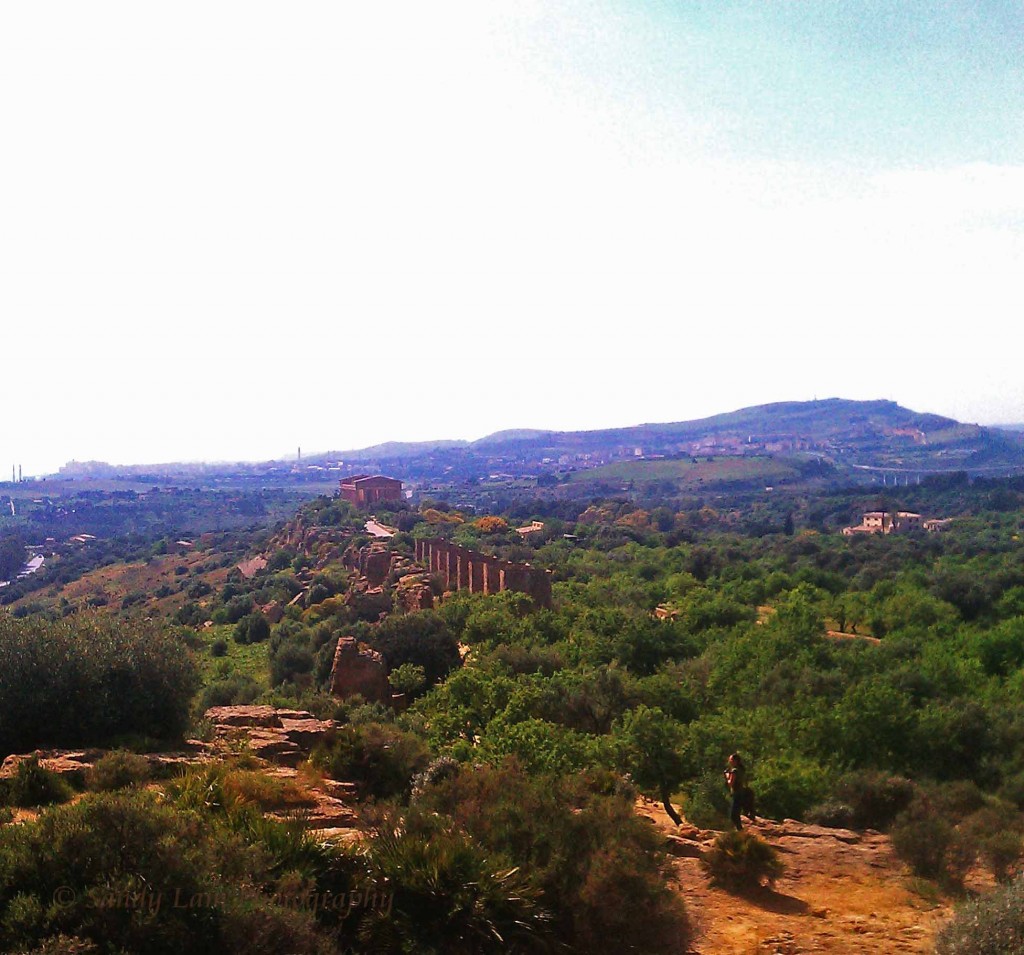 The valley was beautiful, filled with wild flowers and olive trees that were nearly a century old. I didn’t even recognize them as olive trees at first. 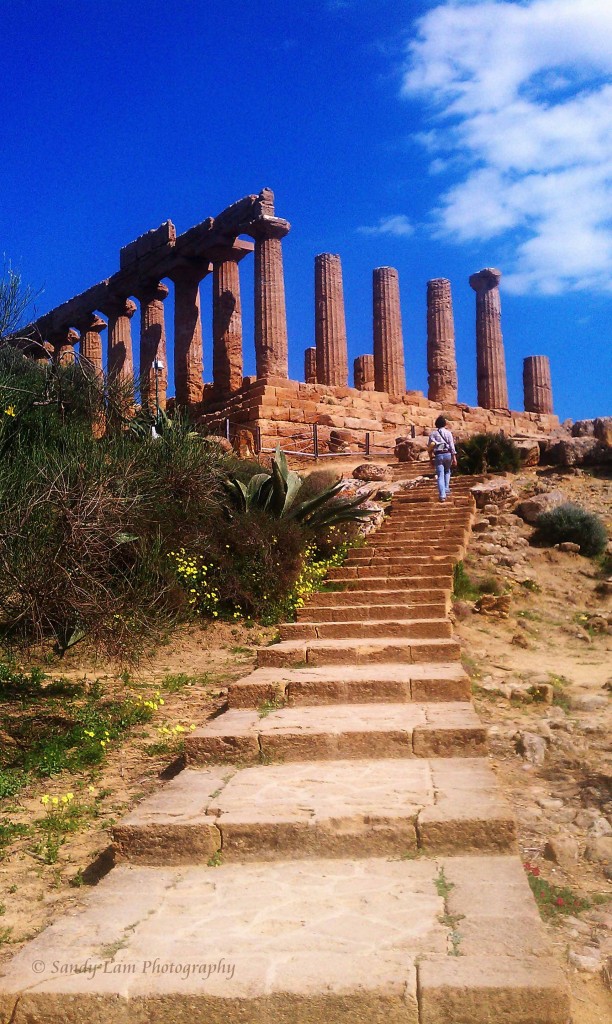 Stairway to Heaven? (Or just the Temple of Juno) 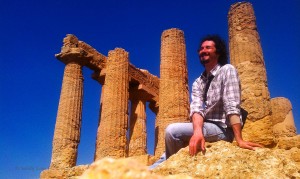 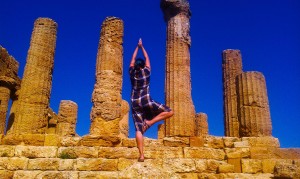 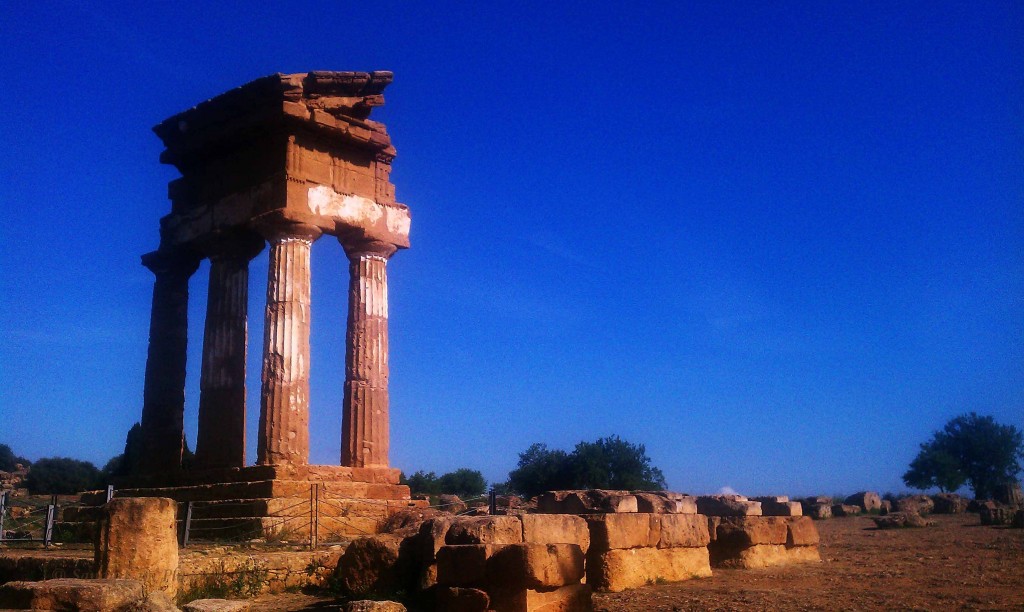 As the sun started to set caught a brief glimpse of these beautiful temples in some amazing light. Unfortunately we had to continue on our way home and didn’t quite get to soak it all in. But it was a beautiful sight and I highly recommend a visit for anyone in Sicily. Though I’ve never really been to Greece, so I’m not sure how it stacks up to the marvelous ruins that are sure to be found there.