When Nathan and I ended up at a new hotel called La Bateau Ivre (good deal 350-500 baht rooms, recommended if you are just stopping by or need a central place to start your exploration), I didn’t realize it was literally on the street where the infamous Chiang Mai Sunday Market is held. How lucky for us! View from the room looking down at the market

While there were some stands with unique handmade items, after you wandered down a block, all the stands start to look the same with the same touristy clothes/souvenirs. I did however enjoy snacking my way through the market and enjoying the local street musicians. I will say that there were only a couple with any good talent while others included some nearly talentless but well costumed children. My favorite part of the market was discovering this glorious restaurant called Mr. Kai’s Restaurant. Just a few doors down from our place, it offers tasty thai dishes for a reasonable price. Despite the touristy area and the ridiculous inflation of prices in most places, Mr. Kai’s remained reasonable, therefore it became my go-to spot. I ate there twice in one day, once by myself and a second time with Nathan. When I was on my way back from Pai and stayed in Chiang Mai for one night, I went back to Mr. Kai’s to my usual people watching spot. 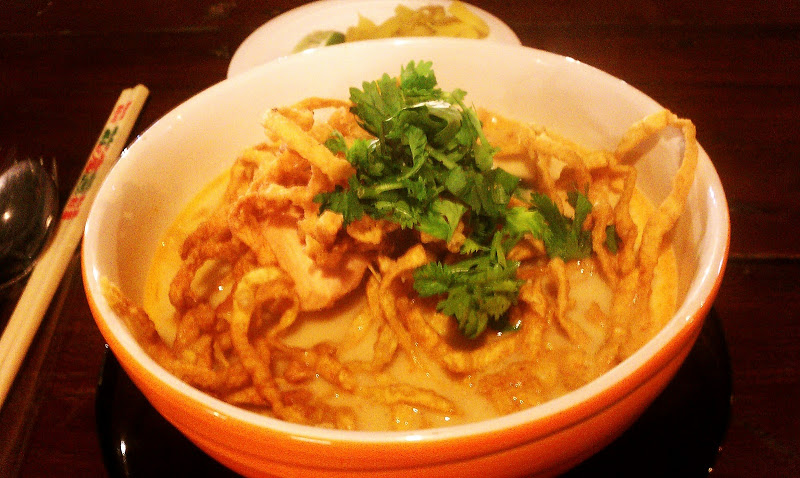 I love this place for several reasons. First – the food and price is great (40-70 baht dishes). In fact, I had my favorite Thai dish I’ve encountered so far in Thailand. Khao Soi Chicken. Essentially it’s like a yellow panaang curry with a whole chicken breast and egg noodles top with deep fried noodles or some kind of crunchy goodness. Lime, onions, and pickled radish are served on the side. The sauce is AMAZING. It was creamy, smooth with the perfect amount of spicy sweetness. And don’t get me started on the chicken. The chicken breast was so tender, it just fell apart with my fork. The onions were too raw for my taste, but the lime was a great addition. Actually even after I had finished all the egg noodles, I ordered an additional side of rice just so the sauce wouldn’t go to waste. That was a little regrettable because afterwards I felt like a pigeon who ate rice and was about to explode.

The second reason why I love this place is that Mr. Kai works as a server here and chats it up with everyone. I didn’t know it was him until the third visit right before I left. Even though there was a week inbetween my visits and I am sure he sees hundreds of people, as soon as he saw me the third time, he instantly remembered who I was and we both laughed at my addiction to his place. We chatted it up as he told me about how he loves to eat the insect specialties in Thailand with sticky rice. 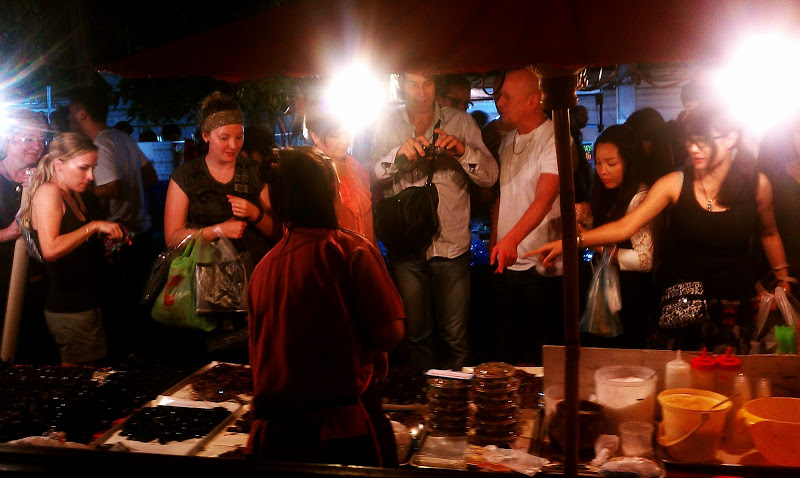 Which brings me to my last reason why I love Mr. Kai’s. “My spot” involves a two seater bench that looks out into the street. I like to sit here during the Sunday market because you’re tucked in away from the crowd, and it makes for good people watching. What probably makes the people watching better is that the same food stand sets itself up outside of Mr. Kai. Selling fried insects of sorts, it is incredibly amusing to watch people walk by, gawk, point and take pictures of the insects. Mr. Kai and I had a pretty good time watching and laughing at people.

Anyway, here are some photos of other things the market…mostly street food. Also this was the first time i saw street sushi…not exactly ideal but intriguing nonetheless. 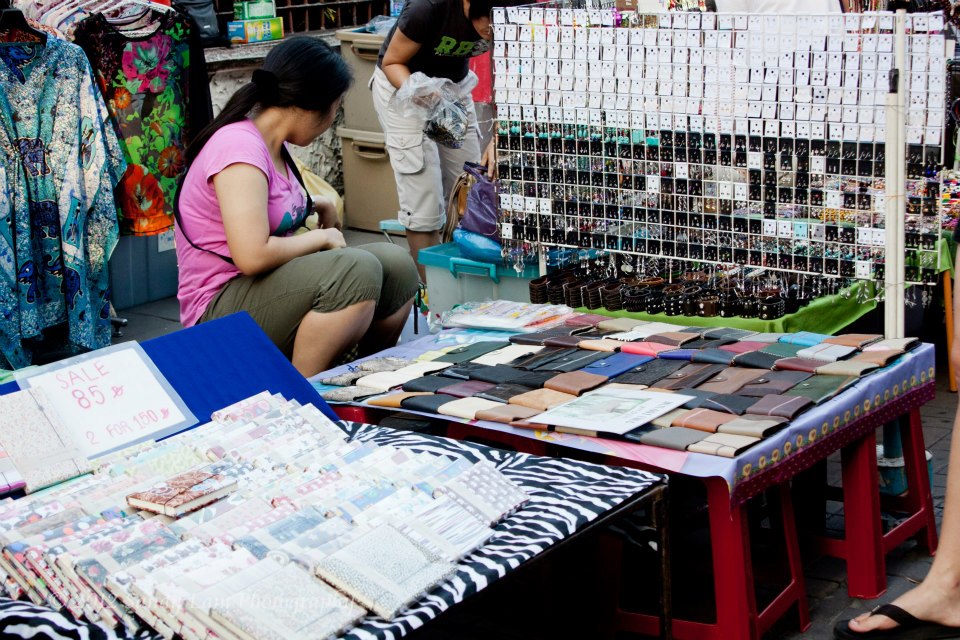 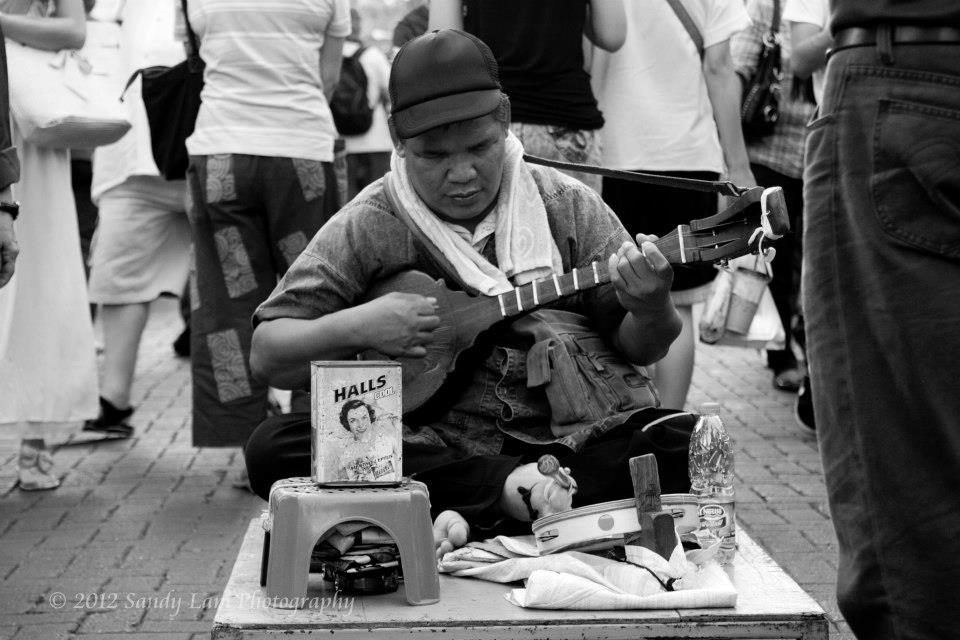 This guy was my favorite. He was awesome and grooving in his own world. 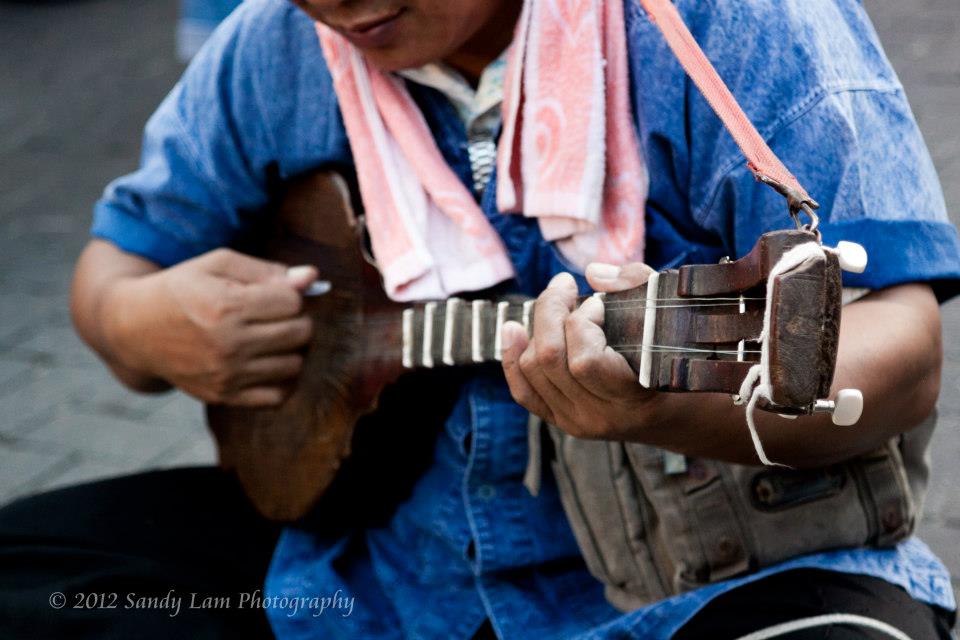 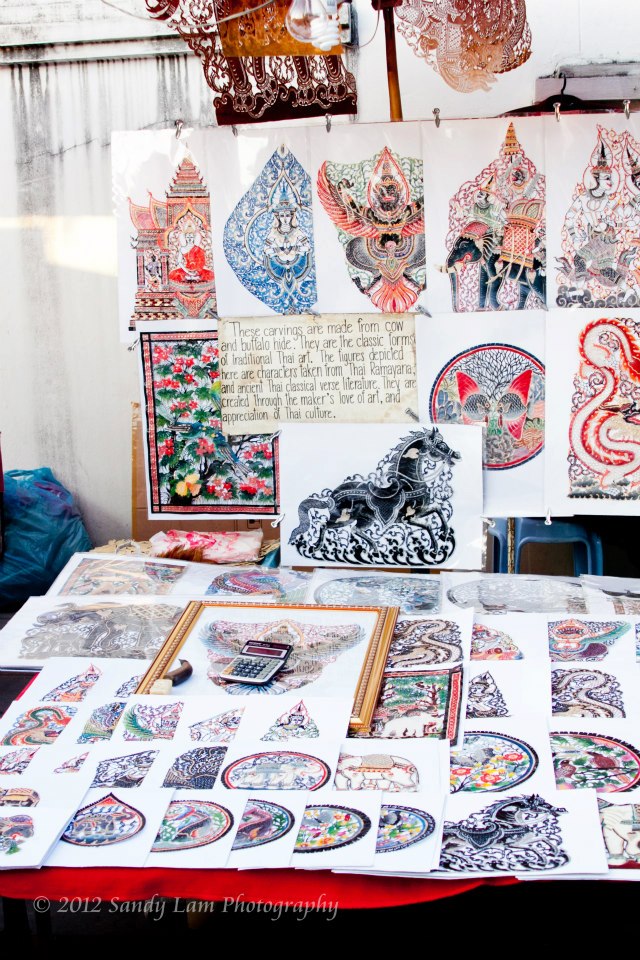 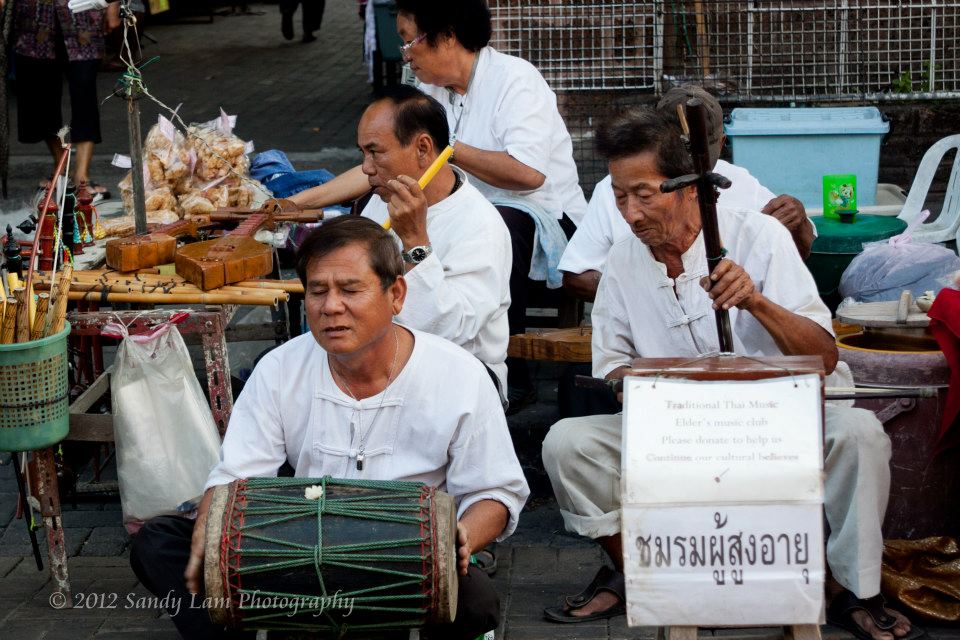 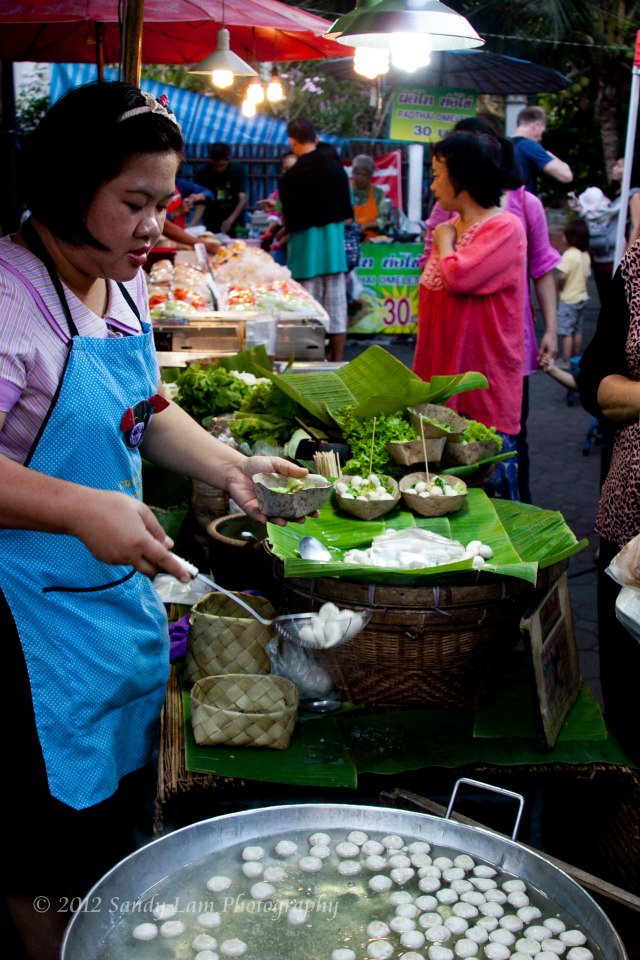 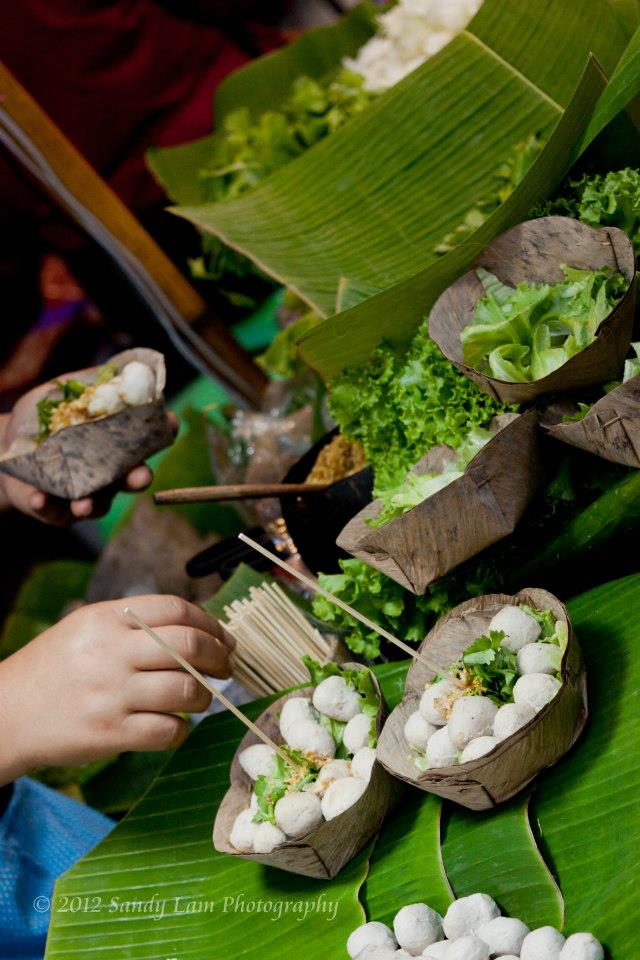 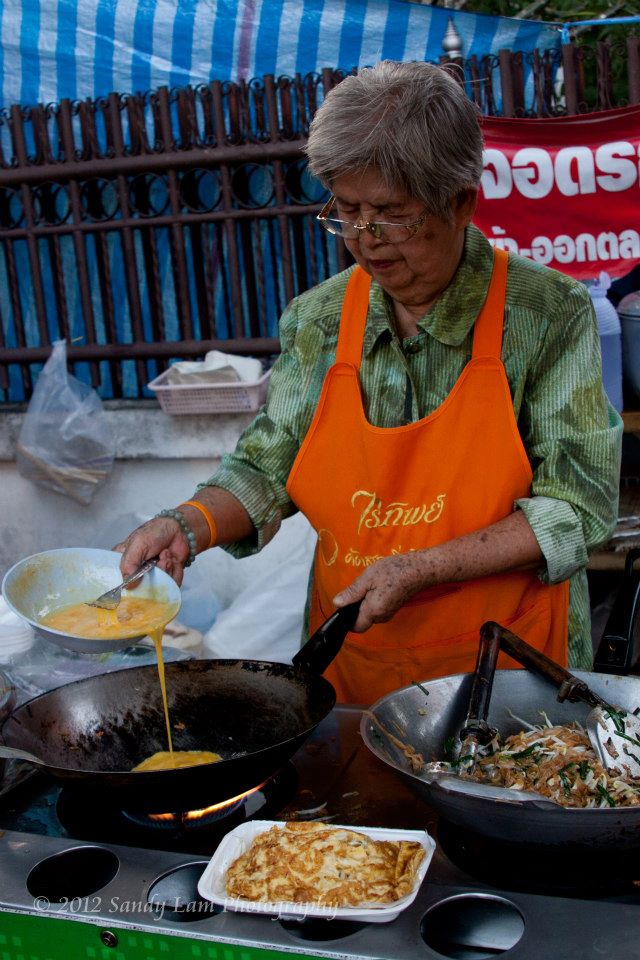 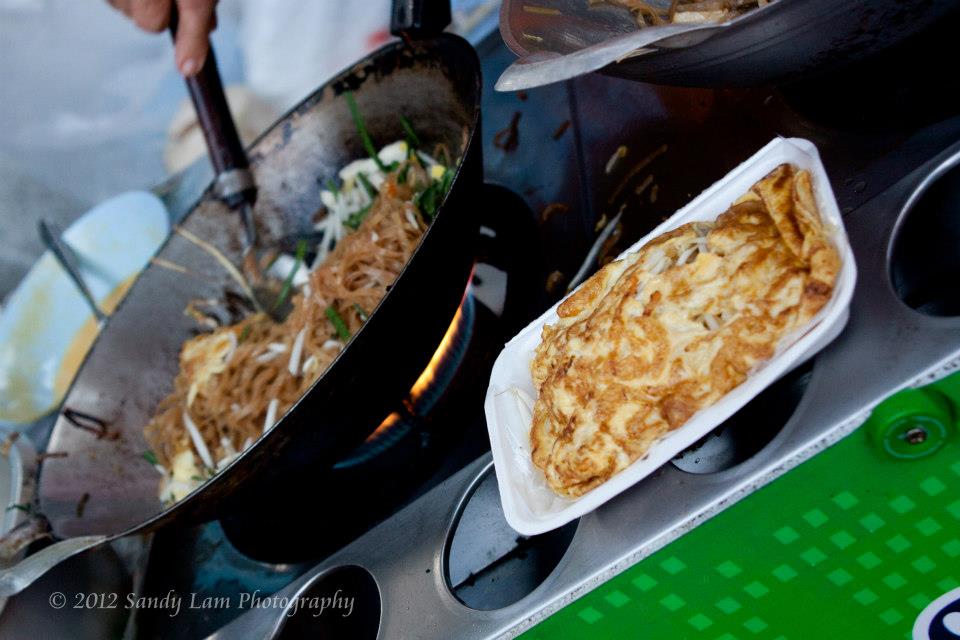 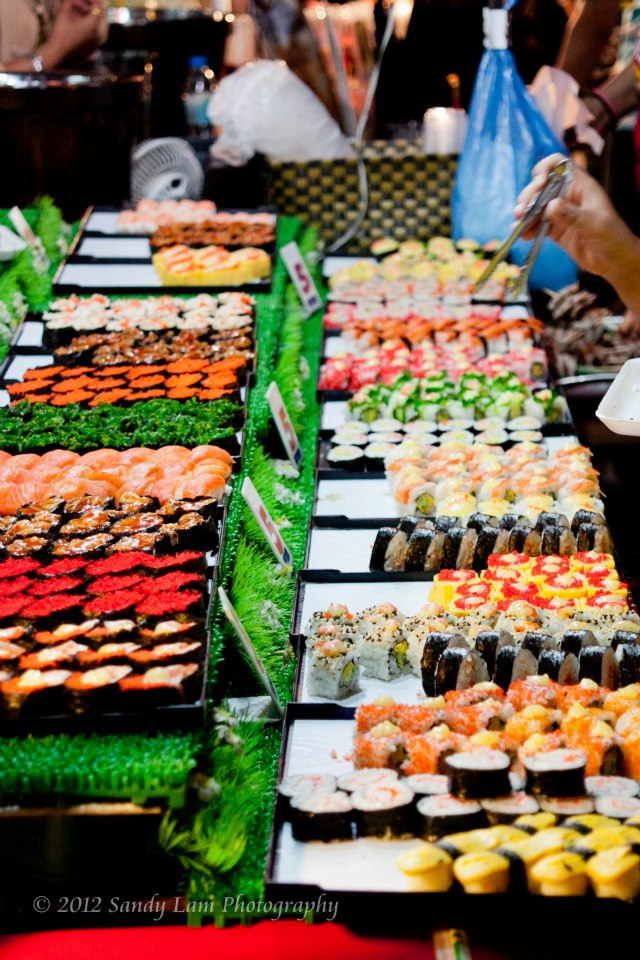