After spending the afternoon on the beach, we decided to venture into town more for some more exploration. Sennigallia is beautiful. I got carried away with the real estate windows, dreaming of buying an italian home. We stopped by a small museum that was built partially over streets where ancient romans lived. It was pretty neat. The skeletons left behind were a little creepy but it was a neat place.

I was craving a bellini as we were walking around so we stopped for happy hour at a beachside cafe. Turns out bellinis here are not what I was used to back home. When I think of bellinis I think of a smoothie-like peach cocktail. Apparently in Italy, it’s basically a very strong mimosa. We tried the strawberry bellinis which had fresh fruit in them, and they were tasty, just a bit stronger than what I had anticipated. The appetizers that came with our drinks were pretty tasty though!

After some exploration we drove a little further north to a town called Marotta. Apparently they were having a sea snail festival. The sea snails, called Garagoi, are a specialty for the Italians. I was a bit skeptical at first but tried it and it wasn’t too bad. You could barely taste the snail..it was just like a clam in a delicious peppery, oily, tomato broth. Of course I also stopped to buy some cheese to bring home to the family. I even got a semi tasty pint of red ale. After one last visit to the beach after dark we called it a night and went home. It was a great day. 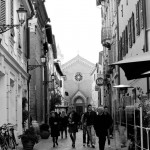 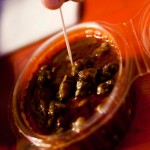 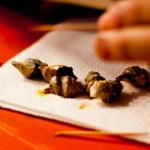 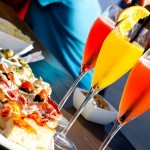