It’s a funny feeling when you’re reading through one of the most beautifully printed wine newspapers you’ve ever seen (Pietre Colorate), admiring the photojournalism and thinking, “Wow..I would LOVE to have one of my photos published in here…this paper is so beautiful!”…and when you turn to the last page, you recognize your own photo printed with one of  the articles! 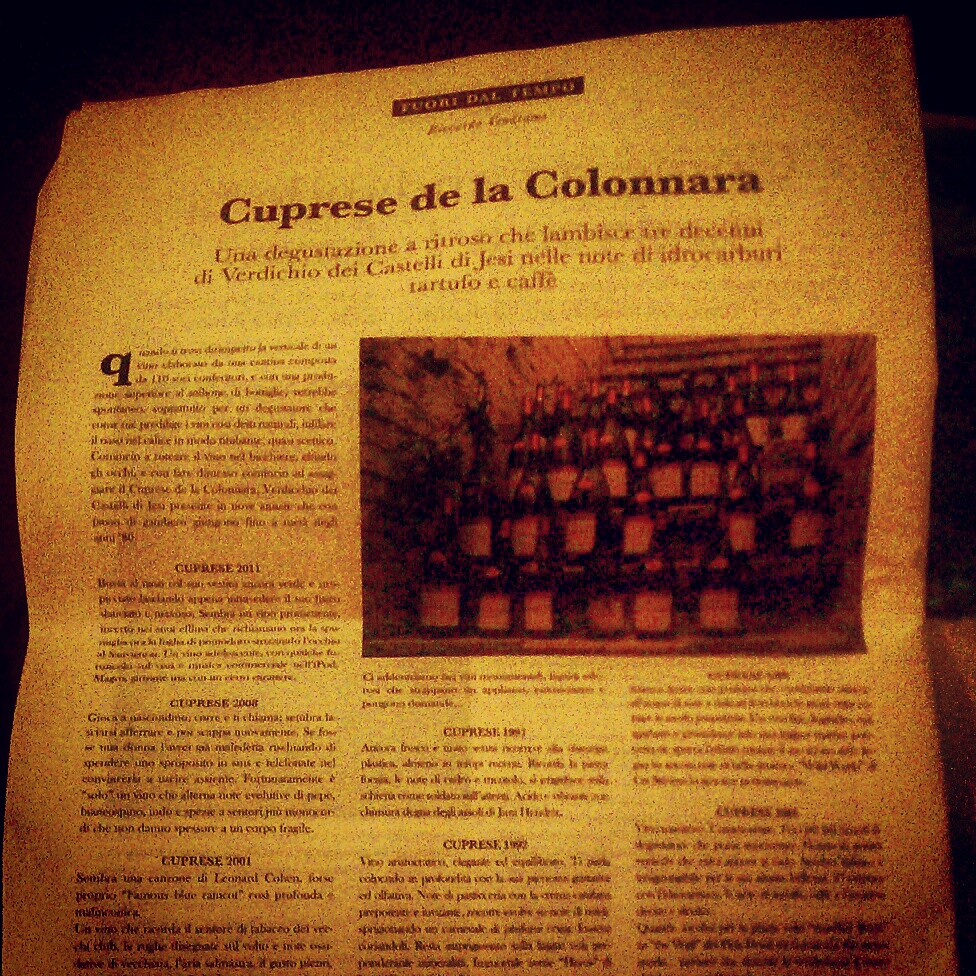 That’s what happened to me while I was working at Gustonudo with Corrado one weekend in Bologna (which by the way was the most fun experience I’ve had in a while). While it wasn’t the first time something of mine has been published internationally, I was especially excited about this publication. The best part was that my name was actually attributed this time! I realized the author of the article was Riccardo Vendrame (a wine journalist I met last fall during Sagra Dell’uva), and I had remembered him asking me for the photo but so much time had passed I completely forgot about it. I also didn’t know that he wrote for this paper, so I was incredibly surprised to see my photo printed.

It’s been fun seeing my photos printed internationally, although very interesting how people are able to get a hold of the photos without contacting me. Most of the places have contacted Corrado asking for permission and in which case, I don’t mind when no credit is given. I accept that when they have permission from their sources, that works. For example, L’espresso and Spirit di Vino both asked Corrado for photos for use. Neither of these photos had my watermark on it, so they could assume the photos were his own to share (which they were. I gave him these photos without the water mark for his own use). On the other hand, I’ve seen some wine blogs will credit the photo to Valeria (actually stating she took the photo) even though it has my watermark on it. This makes me laugh a little as apparently some writers don’t have any common sense. I don’t mind when these photos are credited to Valeria or Corrado or La Distesa…but when someone else subtly tries to claim it as their own…that’s another story. Today I found out I was published in the most well respected Italian Newspaper, Corriere della Sera (Corrado says it’s their equivalent to our Washington Post)…an article about Corrado’s book was published. The photo, (we assume taken from La Distesa’s facebook since Corrado never gave them a copy), has my watermark on it, and yet the paper failed to even give credit to either me or La Distesa. It’s one thing when an amateur blogger fumbles the credits, it’s another when an accredited newspaper does. The paper had the decency to call Corrado last night to ask him a few questions about the article before it was published…you would think since they had time for that they could’ve squeezed in a question about a photo to use.

As a former journalist and newspaper editor, I understand when deadlines are looming and it comes to print time and you can’t get a hold of people to give proper photo credit, but not only was the photo clearly stamped with my name, but they also cropped it without permission. I’ve always worked at places that had a rule…if you don’t know where the photo came from, don’t use it. The least they could have done was say the photo was provided by La Distesa or Corrado. But in fact, there was nothing. Leading readers to presume it was the paper’s own handy work.

Corrado says the paper has been in legal trouble before for failing to give credit to proper sources, and suggested we open a case about it. I’m not one for making a big deal out of something just to give me credit, but a part of me does want to fight just out of principle. A newspaper should cite their sources. What happened to fact checkers/copy editors and the value of credibility? So I wrote an e-mail to the paper shaking my finger at them for using my photo when they clearly had my name to go with it and for modifying it without permission, and asked them for a correction. So far I’ve received an e-mail  stating:

Meaning they’re looking into the department to fix the problem, but need to know which photo I was referring to (seriously, you don’t even know what does and doesn’t belong to you?). This kind of bureaucratic crap sends me through the roof. As a journalist, all you have is your integrity as a fair reporting news source for your audience. When someone tells you, that you’ve basically stolen their photo, you would think one would want to contact the department first to see if they know anything about it. If they did, SOMEONE in there (photo editor or layout editor) would know that my photo was cropped or at least know where they should have sourced the photo. At the same time, I’m surprised they didn’t try to ask me to prove I was the owner of the photo.

In a digital and social media world, this is a frequent dilemma for artists. I understand that overall there’s really nothing I could do about someone taking a photo from the internet and claiming it as their own (the trouble and costs outweigh the single benefit I think). Maybe it’s my own fault for putting it out there to share, but I like sharing my photos (that’s the whole point of photojournalism) and I don’t mind when people use them, I just think the least they could do is ask permission! I mean how hard is that? You are a news source, for pete’s sake. Unless you send your staff photographers (if papers even have any photographers left that aren’t freelance) out to take a photo for every article you’re printing…source your findings…the more I think about it, the more disappointed I am in the laziness of “good news sources”. It’s not just this one photo I feel so upset about…it’s the general way “news” is identified, written, and shared. Maybe we’re just moving into an age where checking your sources isn’t has important as being the first to break the news in journalism, and I’m just an old curmudgeon journalist from the “old days”.

There’s my rant and shaking my finger at Corriere della Serra. Shame on you for ignoring the very basic rule of journalism.

*Update (April 25, 2013): After a few more e-mail exchanges, the Corriere della Serra did offer me a correction and monetary compensation, but has taken back because the journalist claims he had permission from Corrado to use the photos. This is entirely not true. I’ve seen the e-mail exchange. The e-mail from the journalist came at 9:42 pm the night before the paper hit the stands telling him he could not give credit for the photo and apologized for the late notice. Clearly using the photo without any permission. Corrado corrdially thanked him for the article and said the credit belonged to me. Never once did he say it was ok for them to use. So…as of now,, the Corriere della Serra still fails to own up to their failure to check sources. The journalist has also since then, sent Corrado an e-mail asking him to convince me that it was a mistake and they did not steal the photo. I don’t think they realize that I live downstairs and Corrado and I talk everyday. Lucky for me, Corrado is passionate about doing the right thing, and plans to get this settled. Typical Italian politics. Oofa.