Swimming in the Mediterranean Sea

After a crazy first day in Marsala, Giovanni and I opted for a much more relaxing morning. Instead of touring more vineyards, we went down the road for some sun and beach time. We swam in three different bodies of water that day, and unfortunately the morning started with the worst location of all (it reminded me of a dry/warm version of the Washington beach).

I was just excited to get to finally swim in the Mediterranean Sea. The wind was warm, the sun was perfect, the water was…well a tad cold. Afterall it is still mid April. But for this Puget Sound fish-girl, the water was GREAT! This time there wasn’t a jellyfish in sight, and the water was so clear, I was in total all. The waves didn’t really crash onto the grey sands, but lapped quietly and soon my thoughts were lost as I closed my eyes to soak up the sun.

Giovanni and I then made our way over to Scopello, to meet everyone else for lunch. Scopello is BEAUTIFUL. The town is quite small, but charming with the cafes, restaurants and small boutiques everywhere. The surrounding area of white sandy beaches, aqua green waters, made me feel like we wasted our entire morning at a much lamer beach. But oh well. After lunch (which was seriously amazing), we went for a short drive down to the beach, and I went for my second swim of the day. The water was MUCH warmer (at least 5 celsius degrees). 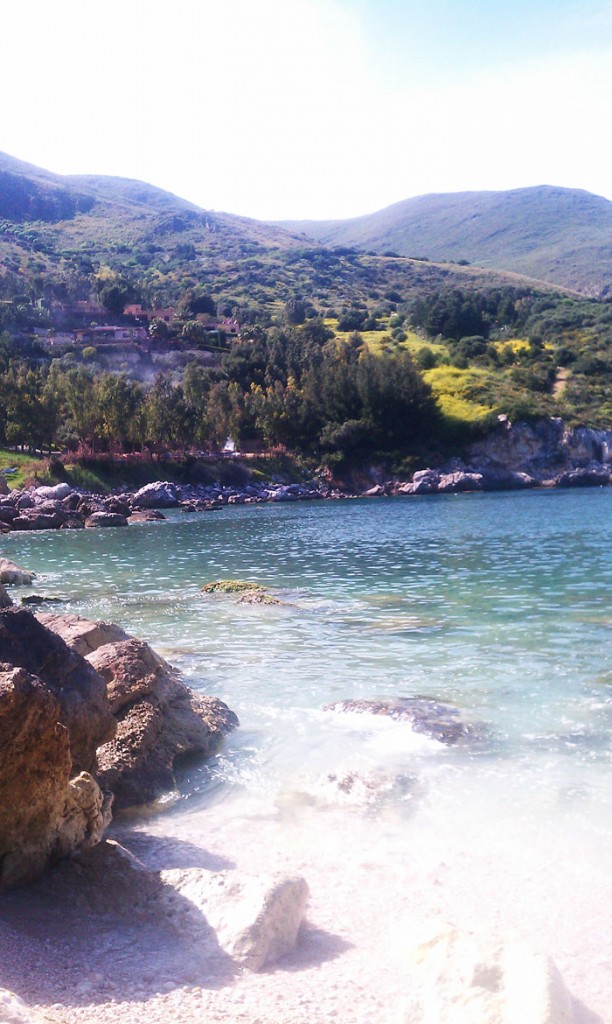 Afterwards, we made our way to enjoy some natural hot springs nearby in Castellammare del Golfo. Unfortunately, these were hardly like the Goldmeyer Hot Springs I love, and more like fancy pools with smelly hot water. Still it was nice to take a dip but I after swimming earlier I quickly was tired out. 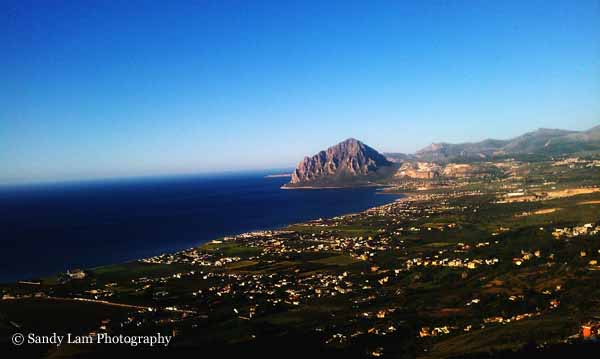 The next day we made an adventure to San Vito Lo Capo, just west of Scopello, but according to some people I’ve talked to, boasted some of the best beaches in Sicily. Just east of the town of San Vito Lo Cap was a nature preserve called Riserva naturale dello Zingero (translated it’s a Gypsy nature reserve). This place was GORGEOUS. We stopped frequently on the way to take some photos before arriving at the park. 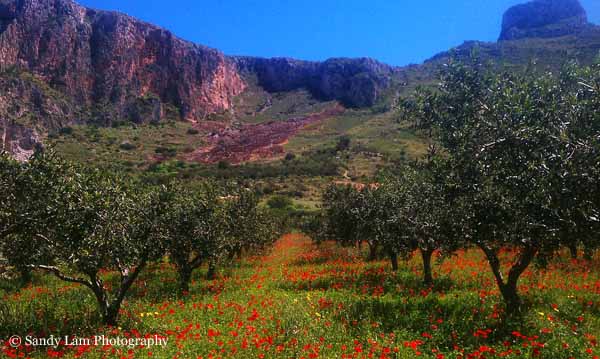 The reserve is a MUST visit for Sicily. For just 3 euros you can spend the days exploring the trails that lead to six different beach coves. The trails were well maintained and beautiful, it reminded me of hiking along the Cinque Terre. This place had another type of beauty than the Cinque Terre but definitely still gave that sort of awe inspiring feeling. Since we were crunched for time, we stopped at the first beach and enjoyed the afternoon swimming and sun bathing. 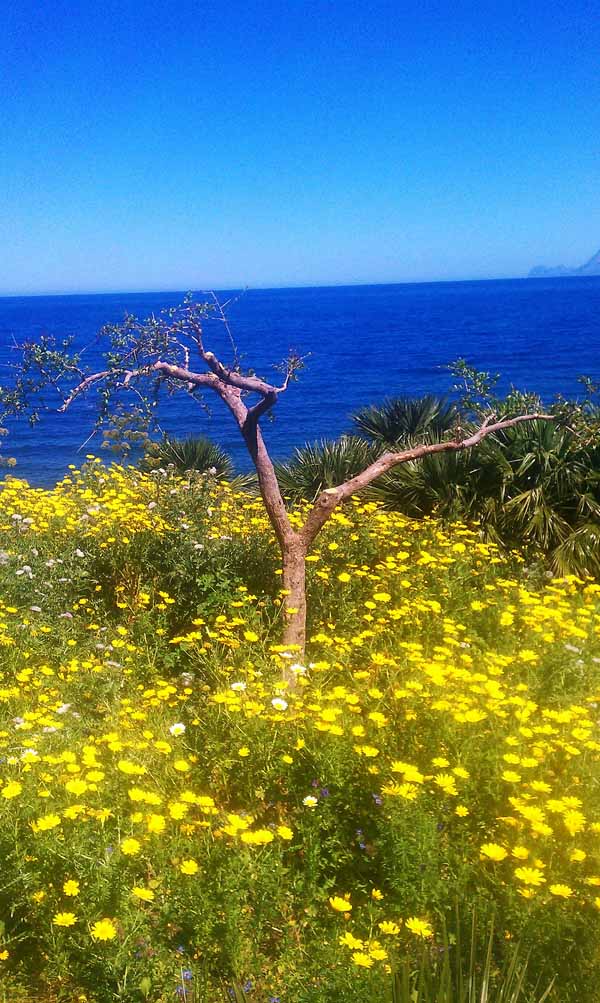 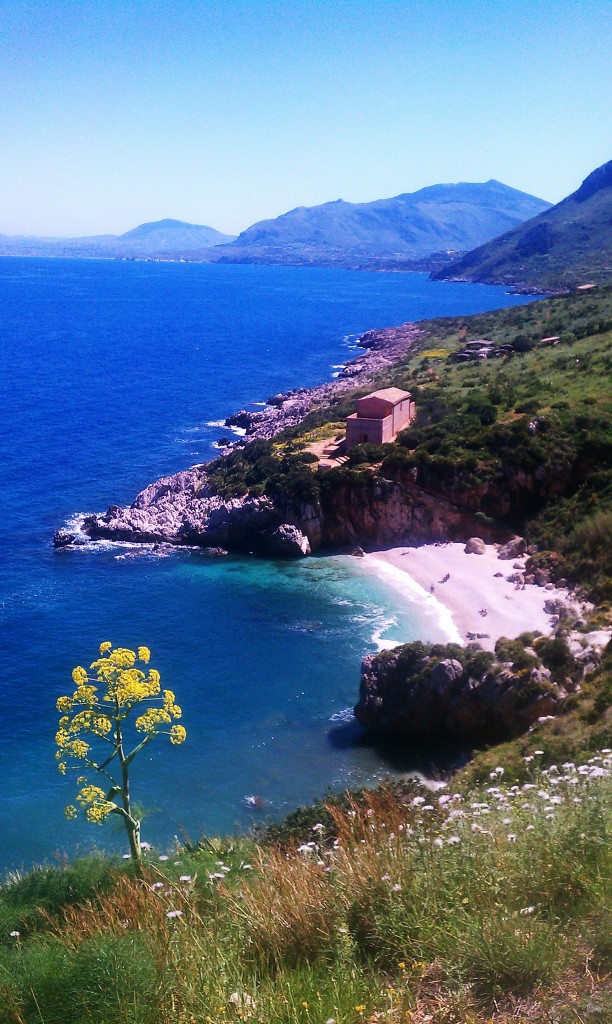 The beach wasn’t exactly the most comfortable. Practically made of entirely stones and pebbles, but the water was clear and refreshing. A naturally wild moment in Sicily.

I didn’t get another good swim in until we made our way east for some time in the foothills of Etna. We spent a morning in Taormina soaking up the last of the Sicilian sun we could get. The beautiful surrounding coves each had small rocky islands, which made for a beautiful sight. It was a bit crowded considering we were in the off season, but there isn’t much space on the beaches to begin with. We found a small spot on a tiny peninsula that let to a small island with a museum on it. I also discovered the best Granita I had in Sicily at the little beach cafe here.

Taormina is also known for the ancient greek theater above the water in town. Little did we know it would just be the start of our Greek ruins spree.