We had a break in the weather today…I wore a dress for the first time and it was so refreshing. A bit windy but it was still warm out.

After lunch Giovanni took me to Fabriano, which is a nearby town, well known for it’s paper. So we went to the paper museum which sounded cool in a geeky way…but ended up not being that exciting. It might’ve been more exciting if there were people who were demonstrating how the old machines worked back in the day. The signs were in english and Italian so I was able to read about it…but even for a scrapbooking dork such as myself it wasn’t all that exciting. The town is quite beautiful. Old stone buildings and all. We happened to come upon a big square outside of a church where we saw a dozen or so photographers. They were all testing tehir cameras waiting for something and I wanted to stay and wait to see what would happen. There was also a museum in the square so I wasn’t sure if something was arriving for the museum or the church. I thought maybe there was a wedding inside the church and felt all giddy waiting to see the happy couple. For the next 15 minutes quite a few people began gathering outside of the church. Probably 30-50 people. I was confused why they were all waiting outside. And then a truck rolled up and a few large flower arrangements came out. I thought this seemed a little odd because if it was a wedding…the flowers would’ve arrived much earlier in the day. And then it dawned on me that it could be a funeral. So I asked Giovanni, “Do you think it’s a funeral?” He assurred me that it wasn’t saying, “No no…the people are wearing too much color…it can’t be.” I didn’t really believe him but we waited anyway. Within a couple minutes a hurst rolled up and I felt like something dropped in my stomach. I watched as what seemed like the immediate family came out of one of the following cars. An elderly man probably in his 60’s was being consoled by many of the people. It was obvious he had been crying. I didn’t see a woman his age with him so I assume the body in the casket was his late wife’s. I wanted to pour my heart out to him. I wish I could’ve captured this moment with a photo but it is moments like these where taking a photo can seem so intrusive. I remember a few years ago, I gave a speech at the Lumeria Ceremony for a Relay for Life event. I talked about my professor who had just died a couple weeks before the event from pancreatic cancer. It was a hard moment for me and after I left the stage to light my candle across the field, I remember a photographer from the school paper coming up to take a photo of me. My boyfriend at the time was consoling me and I remember the photographer actually saying “Don’t mind me. Pretend I’m not here” and snapping photos. I felt like punching him in the face.

With that said I do have much respect for many great photojournalists out there. There is something to be said about being able to capture those hard moments. I just personally couldn’t bring myself to do it. After we watched the family go inside my heart felt heavy but as soon as we turned the corner it was like we were in another world. Children laughing and playing in the center of town, people shopping and eating gelato. I decided gelato was a must so we grabbed some and explored some more of the town. 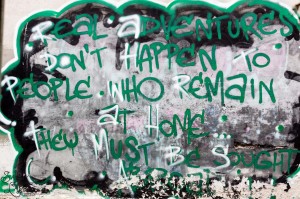 We ended up in a small garden and stopped by a bakery to pick up bread for dinner. I found a graffiti quote on a wall that seemed rather fitting given my situation. “Real Adventures don’t happen to people who remain at home. They must be sought abroad.” It made me smile and think of some of those back home who inspire my traveling. Then we went to two different parks to lay out in the sun and people watch. It was a glorious afternoon. The weather, the company and the conversation was a splendid way to spend the day. Ah Italia…