Yesterday we went to the Adriatic Sea. Giovanni, Lisa, Hillary, and Corrado’s family all went to the beach. 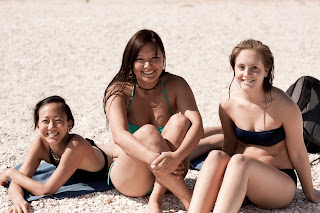 It was great. HOT…relaxing…salty. We went to a beach in between Senigallia and Ancona. It sort of reminded me of Malibu or Venice Beach minus the douchebags. I mostly enjoyed spending time with Corrado’s children, Julia and Giacomo. I really wanted to take photos of them because they are so precious and incredibly photogenic. 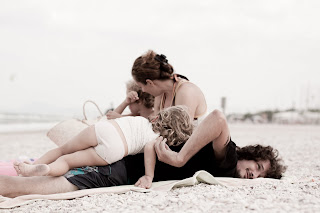 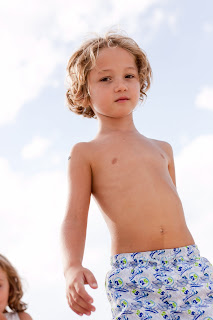 Giacomo is a stud. 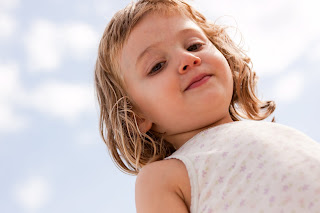 Julia is just so sweet. 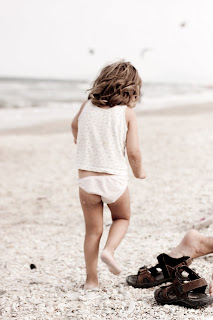 Daniela turns out left to go back to Milan and I was very sad to see her go, but here you can see her with the children.

So precious. We did eat at a lovely beach side seafood restaurant so I grabbed some food photos for you foodies. 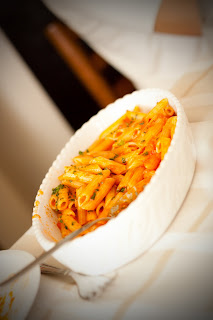 Penne with an Arabiata sauce. 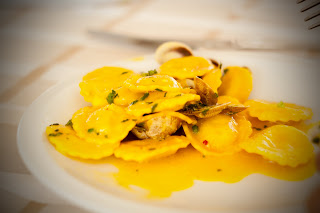 The special for the day. Ravioli stuffed with some kind of fish. Tossed with clams. 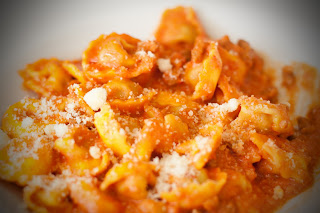 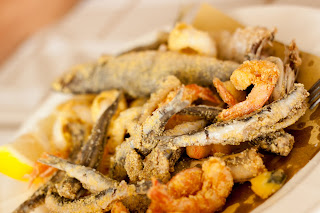 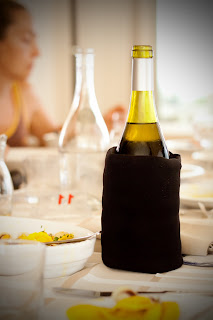 This is the best thing I’ve seen so far. A cozy for a wine bottle! Niiice. 🙂 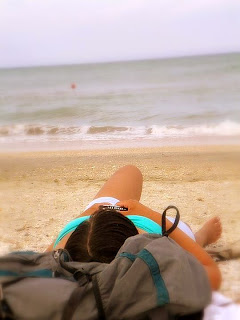 After lunch we enjoyed some beach soccer, and I tried some harmonica tunage (Hillary snapped this photo of me falling asleep after playing), we all kind of passed out and took a nap. When I woke up it looked like a storm was a brewing so we got moving. But not before a gelato hunt! 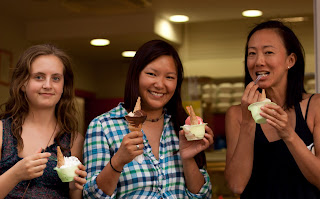 I finally got some tasty gelato in Senigallia. I will have to say that I do believe that D’Ambrosio’s gelato is tastier than this one. Although it was still tasty nonetheless. I was a very happy camper!

Today we slept in, did laundry, and went to the cellar to do some bottling. We enjoyed a deliscous dinner of minestrone soup and homemade foaccacia bread and a homemade pastry dish filled with fontina cheese and zuchinni from the garden. It was AMAZING to say the least. The weather has been cooler and a bit spotty. We haven’t been able to harvest because of the rain…but I am welcoming the cooler weather just got a moment.

Turns out that there is a big wine festival coming up in a couple weeks which I am really looking forward to. The village has been busy preparing for the festivities, working at night since everyone else works during the day. Apparently, this town that normally has around 10,000 people explodes to 25,000 during the 4 day festival. They village which is at the top of the hill is completely closed off and to get in you have to pay. Lucky for us, Daniela has a house in the village that she won’t be using. So we’re staying there and apparently not sleeping for four days. Valeria says the music goes until 4 a.m. and people are running around being crazy. Corrado told us that one year, one of the WWOOFers got drunk and lost and he found him at 5 a.m. stumbling around….haha….I am not sure what to expect of this but it certainly sounds entertaining! So look forward to that entry! I’m also looking forward to learning how to make homemade lasagna noodles from Helena. Also a very lovely elderly Italian woman who has been helping us harvest once in a while. Valeria has asked her to teach her and since I am interested in learning how to cook, that’s where I will be as well!

Well I’m running out of some writing juices. I may get around to some bottle photos tomorrow. Also, just in case you’re interested, I’ve been listening to this song all night. It just really fit the mood for tonight. Buona Notte!