The Beatles Ashram and a Dip in the Ganges 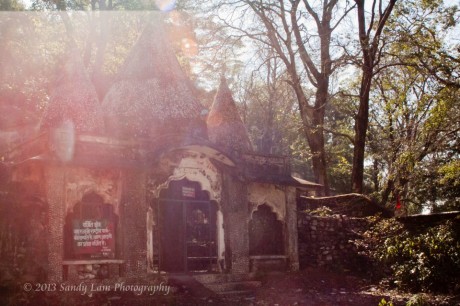 Rishikesh is known as the Yoga Capital of the world, as many forms of yoga came from this area. It used to be filled with legitimate ashrams (the ones that don’t ask you to pay hundreds of dollars to get your om on) but these days, it’s heavily catered to the western yoga enthusiasts (and therefore use western prices). It was quite possibly the most commercialized place I’ve been to in India by far. Don’t get me wrong, just like every other place in India, you still see incredible glimpses into their culture, and you still see many “unique” and strange sights you just won’t see in the states. There are still rumors of legitimate ashrams just a short walk out of town hidden in the surrounding forests, but they sort of run like a secret society. No one who isn’t staying there can know of it’s location or see it. 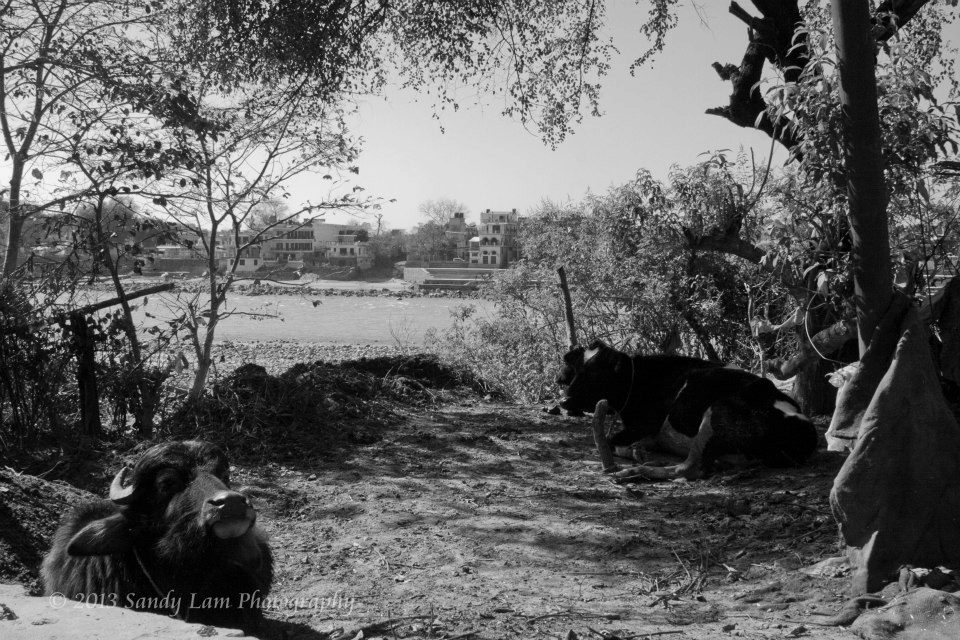 Back in the day, there was an ashram taught under Maharishi Mahesh Yogi, focusing on Transcendental Meditation. In February 1968, The Beatles and their respective families came to attend a course. Some say this was one of the bands most productive periods as many songs for The White Album and Abbey Road were written here. Each member left at different times but their stay was more of less a couple of months. From what I’ve gathered, the ashram abandoned and shut down in the 80’s and then “reopened” to the public in the late 90’s or early 2000’s. It’s still abandoned, but for 50 rupees a “guard” inside the gates will let you wander in and explore. I always wonder about these guys that sit outside these kinds of places and wonder if people just takes turns pocketing the money for the day. Where does the money go to anyway if the ashram is closed?

Anyway, Simon and I decided to have a nice long walk over to the “Beatles Ashram” just a short walk west of all of the tourist shops and active ashrams south of the Ganges River. Good thing for me that he had already been there so he knew where it was and which one it was more importantly. There’s no sign outside that tells you what you’ve stumbled upon. Well there is, but it’s in Hindi. The ashram was a lot bigger than I thought it would be. I found out later that it covers 14 acres. It was a beautifully warm day to explore the ashram. Housing facilities seemed to vary. Closer to the entrance were small huts made of stones. Some were single room dwellings, others had two floors or joined like a duplex with others. It also surprised me that these homes had remnants of western facilities. It’s still not entirely common to find any western toilets in India nowadays unless you’re at a touristy shop. It surprised me they would have them back then for everyone. But then again I guess the Beatles stayed there. 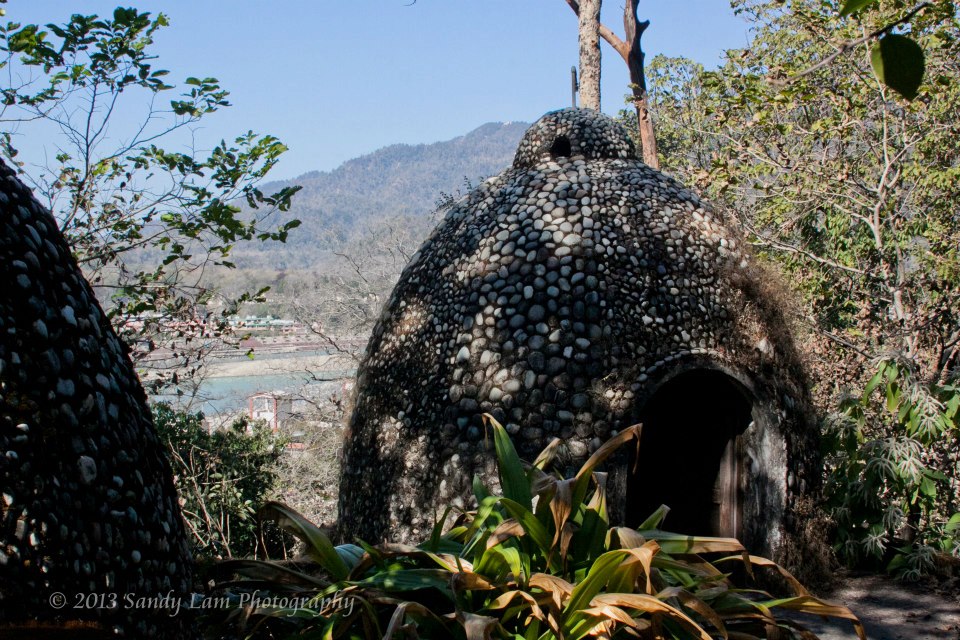 We walked up a bit further where much larger, “modern” looking buildings stood. These basically functioned like dormitories. There was something a bit eerie about walking up and down the halls reading scribbles and trying to interpret quotes or drawings left behind by past visitors. Must’ve been the dark hallways and crumbling infrastructure of the buildings. For a Beatles attraction the place was empty and there wasn’t anyone else around…or so we thought… 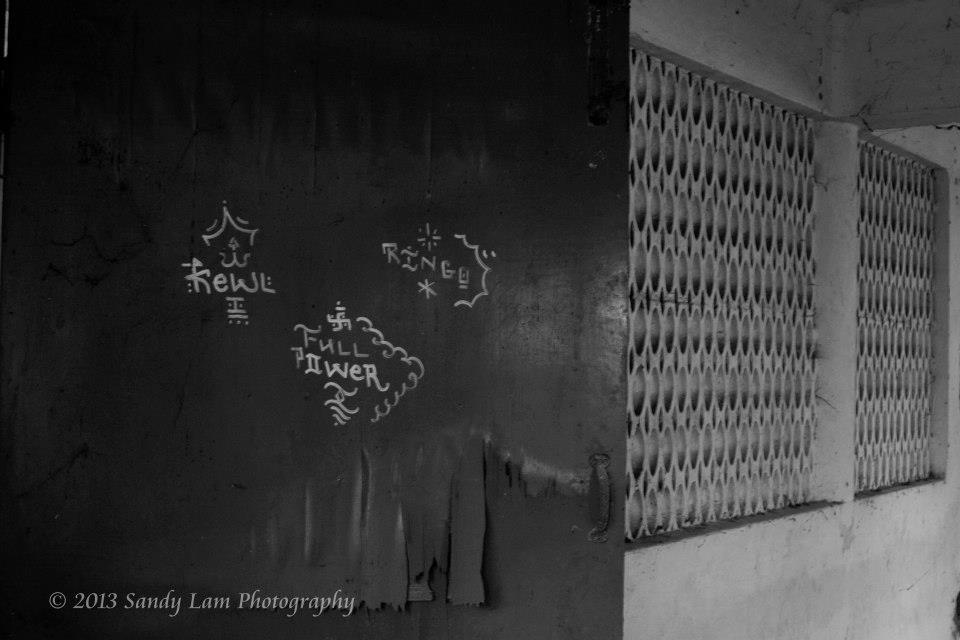 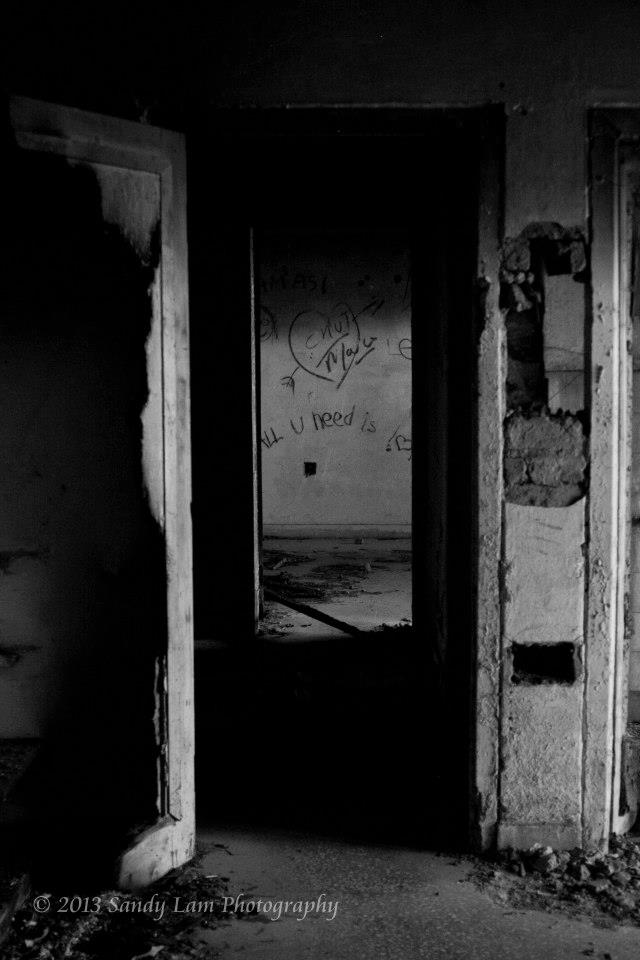 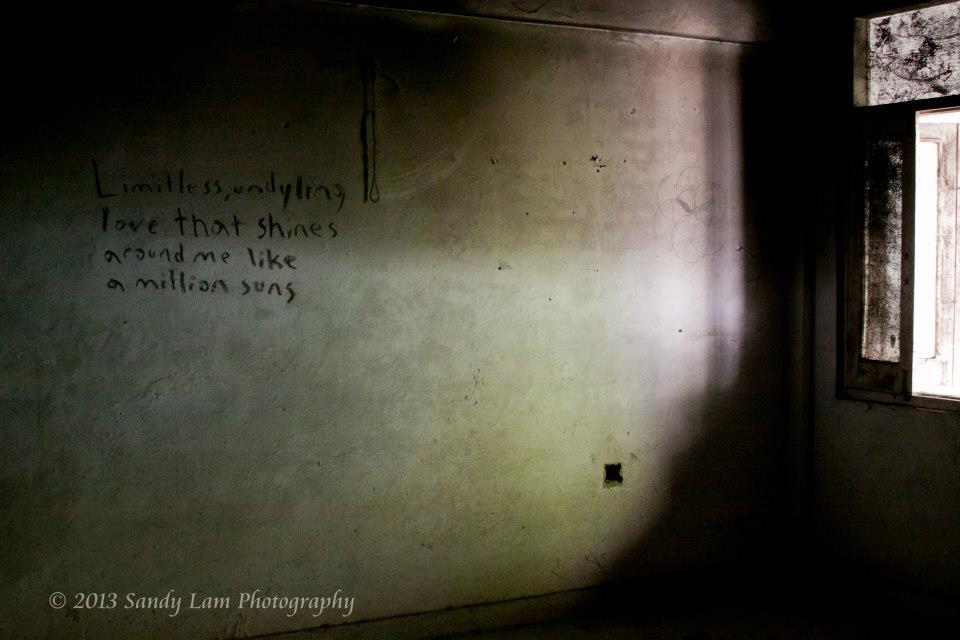 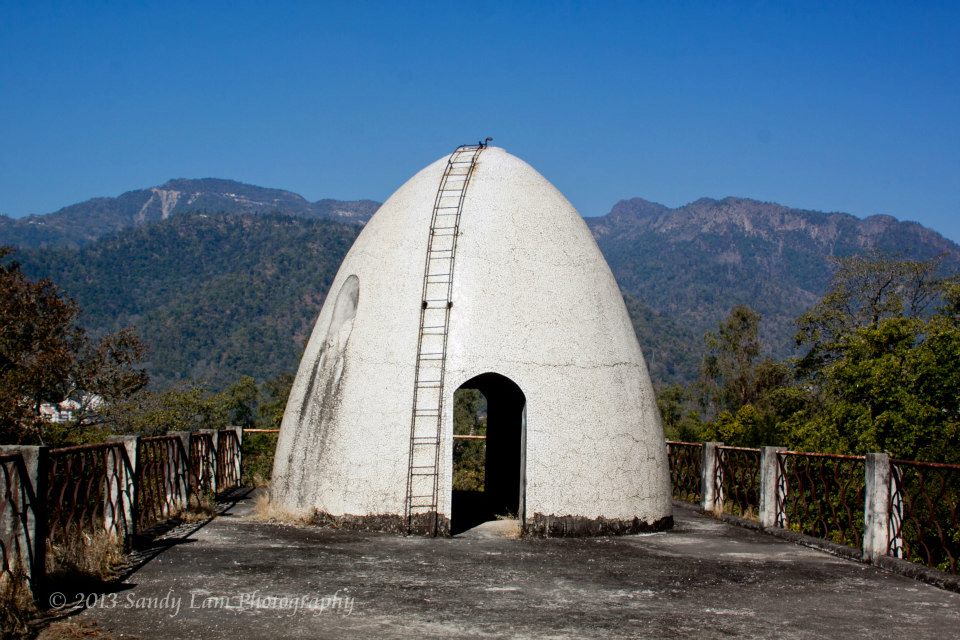 We came upon a more unique looking building (sorry forgot to take a photo of the outside), and could spot some neat graffiti art through the main doorway. Simon and I must of spotted it at the same time and were both debating going inside when a shadow of a person walked into the doorway view. I literally gasped and jumped because it scared me and my reaction made Simon jump as well. I told you these abandoned places creep me out! Of course the second I did it, I realized it was just another tourist and we both laughed at my ridiculousness.

I’m not sure what the building used to be, but these days it serves as The Beatles Cathedral Gallery. It was a standing art project that lasted two weeks in April 2012. Since then, visitors have continued to add their personal art statements. It was a pretty neat art space that I enjoyed. 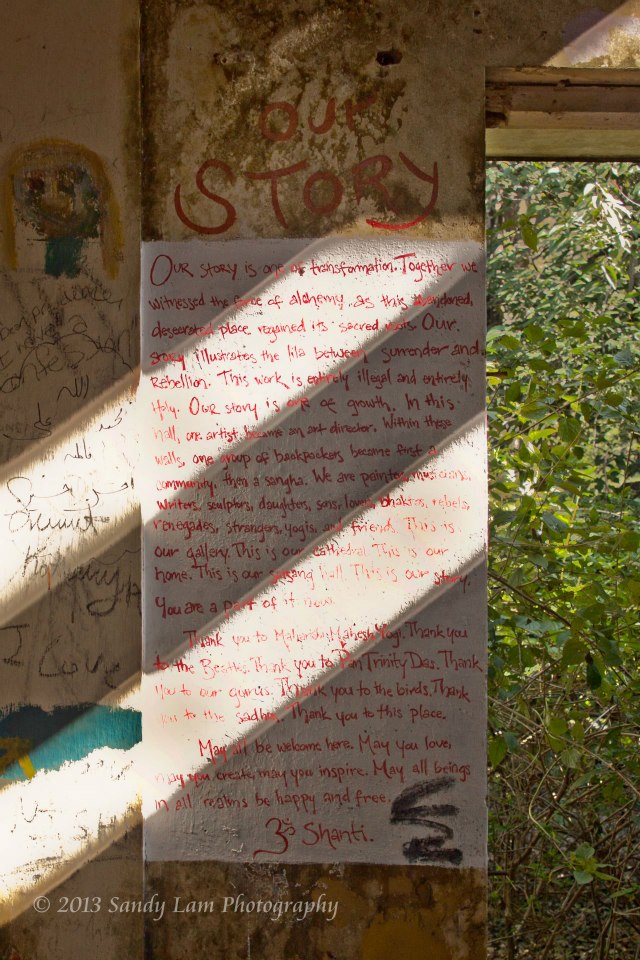 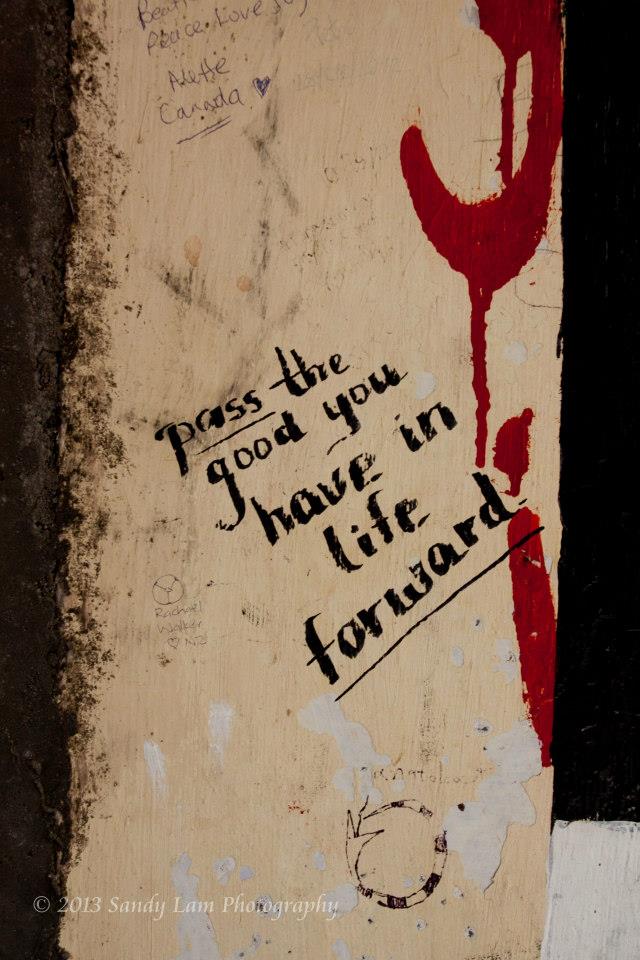 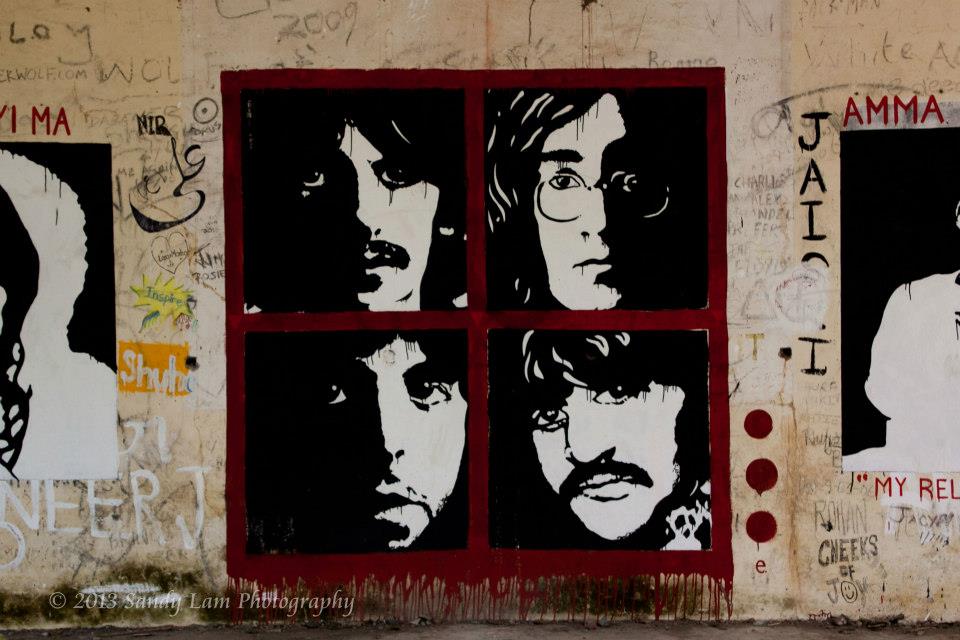 After some more exploration, we realized that QUITE a lot of people lived at this ashram. The last building we found had room numbers up to 500 and then some. I don’t really know much about ashrams but that seems like an awful lot of residential rooms. Then we saw a small doorway opening in a hillside/lots of trees that seemed to lead to a storage area or some sort, only it actually turned out to be a very large auditorium type room. I looked around at the infrastructure was clearly falling apart. Metal beams hanging precariously above us, weathered and tatterred fabrics draped over, and the surrounding nature slowly making it’s migration inside the missing walls. 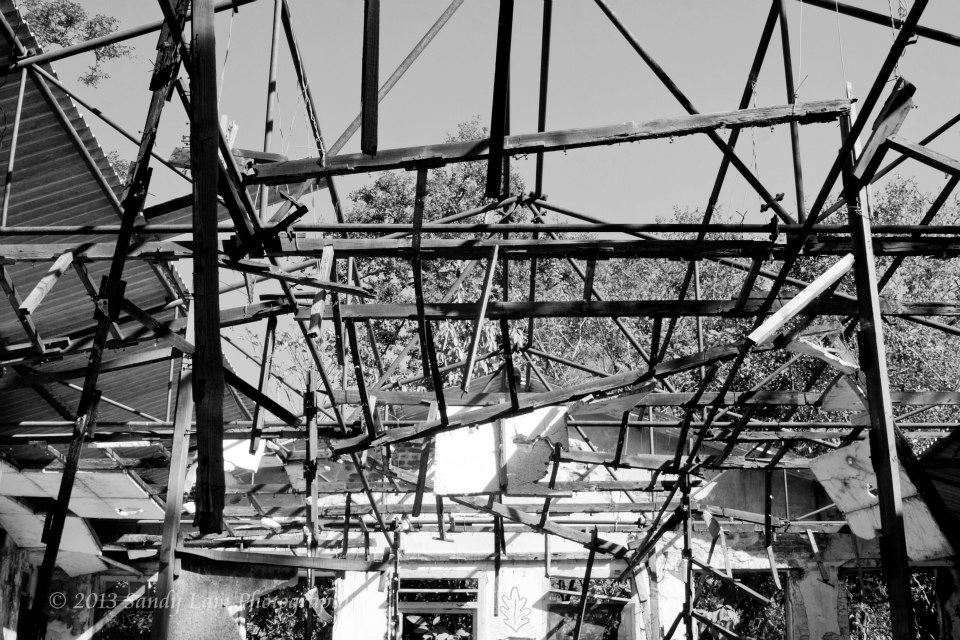 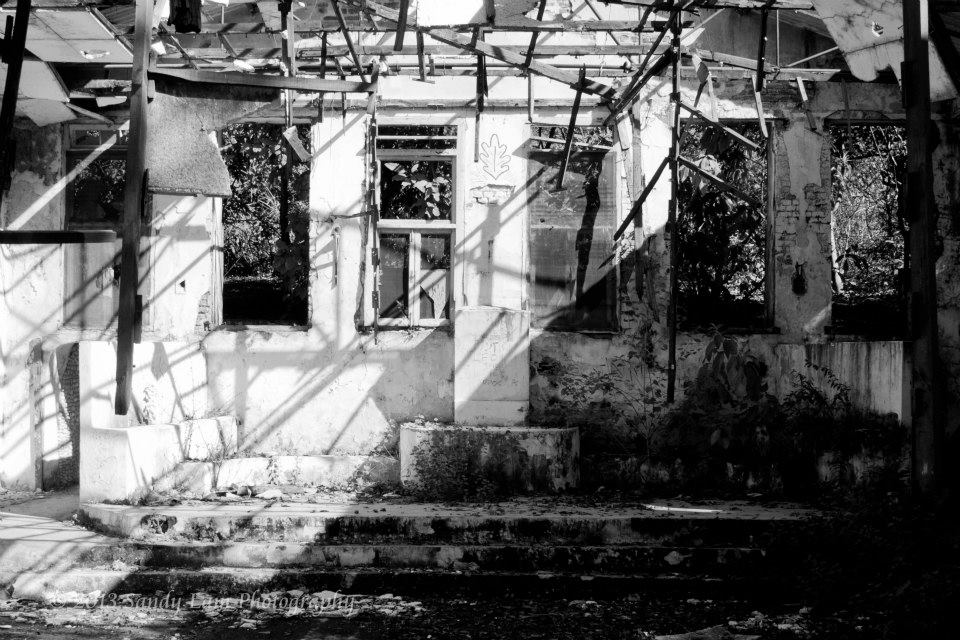 Strangely enough though, there was a “hallway” that had what I could only describe as multiple cell rooms. Each little room didn’t have a door but the room was curved around. Sort of like in a public swimming pool. The rooms to the showers don’t have doors but the shower is just behind the wall so people walking by can’t see…not sure if it makes sense to you. But I creeped my way down this hallway and barely made it past the first four “cells”. There were no windows and the corridor just disappeared into pitch black. When you tried to look into the rooms your eyes had to adjust to the darkness and I just felt like something creepy was about to attack me and practically ran out. When I did, I saw that directly across the room from where I was standing, written in bright red paint (the only color in the room) was: “Blood was spilt here”. I think I literally squeaked when I saw it and told Simon we needed to get out of this place. Simon made a mention of all these strange things being all too fitting for a cult, and that idea just brought on a whole bunch of crazy ideas in my head. Like the room we were in could’ve been used for crazy sacrifices or something. I just had to leave the place after that, so we made our way out and hopped over a “wall” (it was so crumbled you could barely tell it was a wall).

We came out to a dried up riverbed where some locals were gathering sticks, and eventually to a road. We followed it back into town and walked along the Ganges. I dipped my feet into the fresh cold water (maybe subconsciously trying to wash away the terrible feeling I had at the Beatles ashram). I spotted a group of people bathing themselves at a ghat so Simon and I spent some time observing. In Pushkar, photography is STRICTLY prohibited at the bathing ghats (500 million signs will tell you), and so when I saw that the families were all posing and taking pictures of each other, I thought I might be able to sneak a few in. I was so drawn to the women who were bathing in their beautiful saris looking like they were having the time of their life. I walked over and signaled a question of if I could take photos and they weren’t exactly enthusiastic, but they consented. Good enough for me! 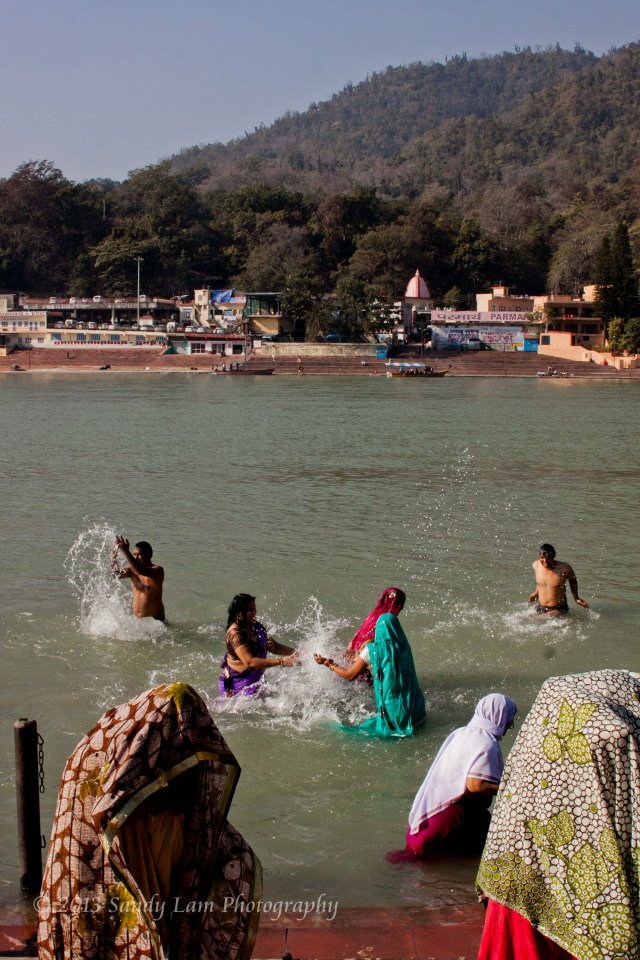 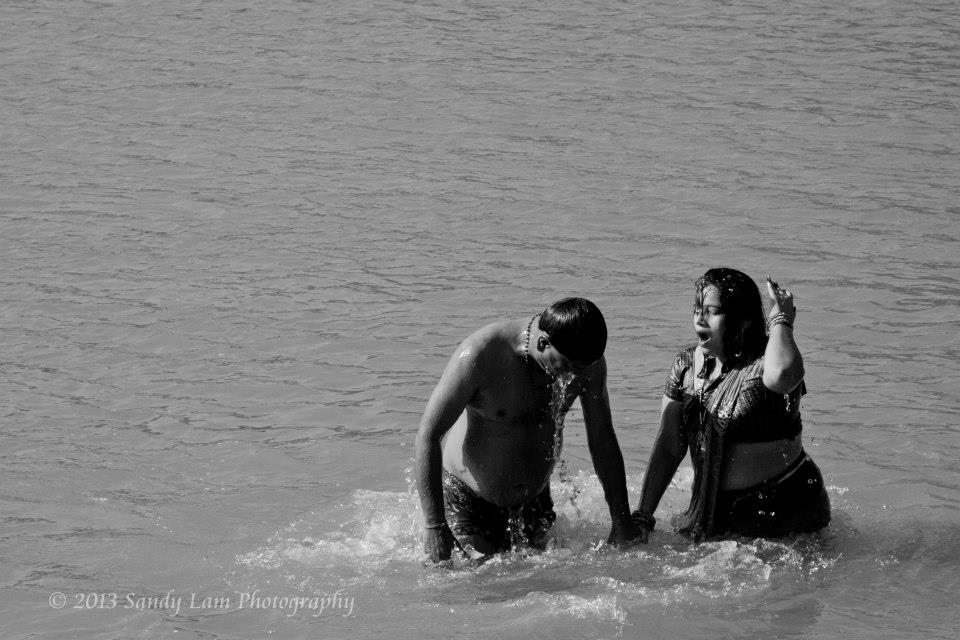 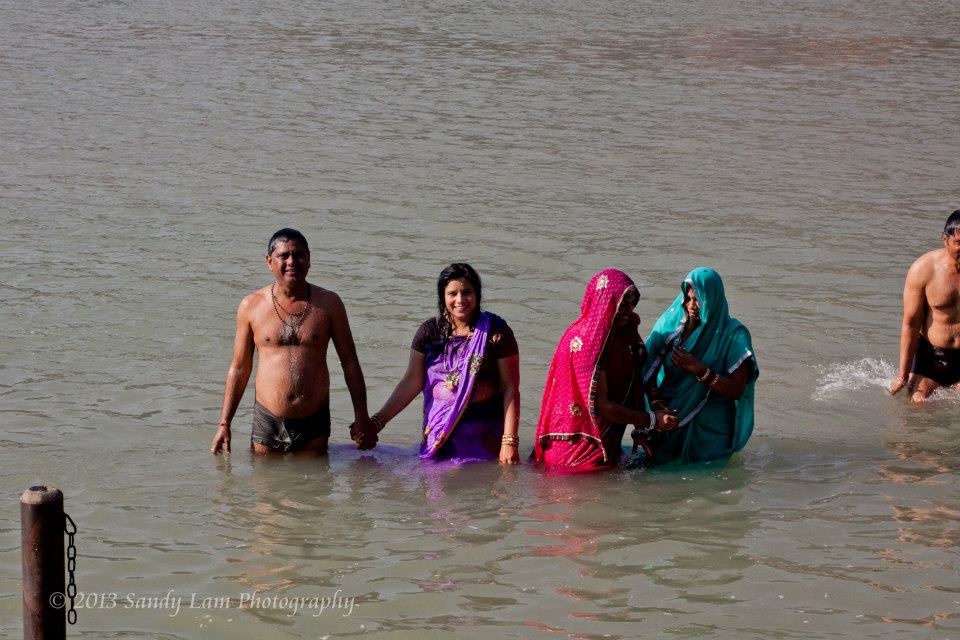 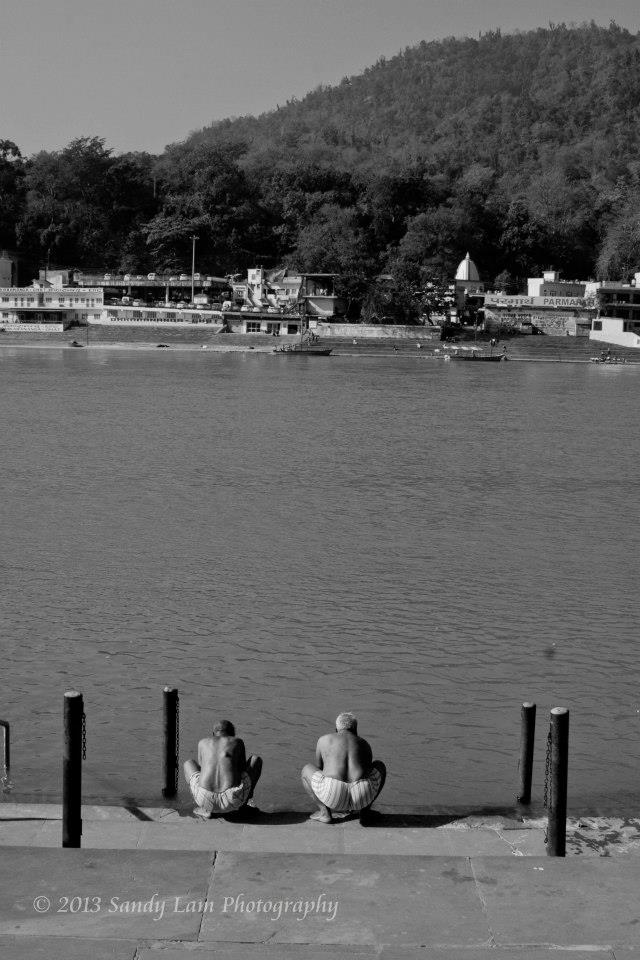 It was a strange day, but definitely a highlight of my time in Rishikesh.