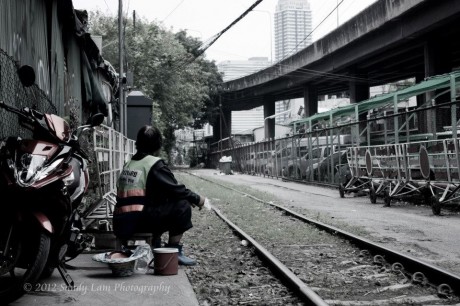 Thailand represents many firsts for me. It’s been a while since I’ve done the whole touristy bit…I’ve become quite accustomed with settling down once I arrive in a country. I like getting to know locals and making new friends. It makes for a much more enjoyable experience as a solo traveler. Seeing the sights can be fun, but not everyday. So here I am in the throws of being a tourist. Once again I find myself lost in a sea of completely unrecognizable language. It might as well be Japanese or Korean or Chinese. I have no idea what each of those squiggly lines or leafy looking things at the end of each character/letter. Even though nothing is written in English in Turkey, at least you can recognize letters, even if you have no idea what they mean. The squiggly lines…aren’t working for me so well. Public transportation was probably my highlight of Bangkok. It’s surprisingly easy to get around for not knowing the language and because everything comes at such frequent intervals.

Which reminds me, I now realize how lucky we Americans (and the British too) are. The fact that English is used nearly everywhere in the world always floors me every time I think about it. When I was flying from Moscow to Bangkok on a plane full of Russians, I noticed that many didn’t speak english and when it came time to fill out our immigration/arrival cards, they had to be prepared with documents that showed them how to fill the form out in Russian. The card was only written in Thai and English, so if you didn’t know how to read either of those, you were screwed. I’m just really thankful that English comes so easily to me!

I was also thinking how incredibly unfair it probably feels to be from a country who’s currency is not as valued globally. I’m not going to lie, I love how my US dollar goes so much further here. To go from the British Pound to the Thai Baht is almost unfair. When a beer in London costs me nearly $9 and a beer in Bangkok costs me less than $2…it seems ridiculous. I am always complaining about how difficult it is to travel outside of the US from Seattle because airfare costs so much, and then currency like the euro or pounds makes our dollars worth even less, but I can’t imagine what it would take for someone from Thailand to be able to save enough money to come to a place in the states. They would have to be three times as successful to make up for the currency value. Thinking about that, makes me much more conscientious towards others. i know I sound like a spoiled American right now, but I do think it is important to acknowledge the privileges we come to experience. 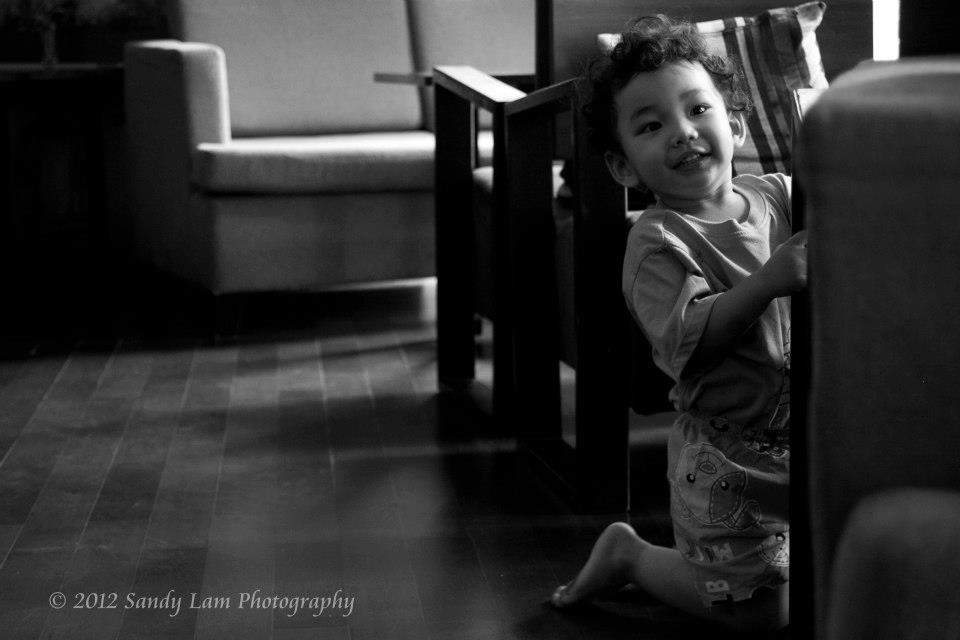 Bangkok is one hot, sweaty, smoggy mess. I don’t know how else to describe it. When I arrived it was 92 degrees Fahrenheit, with 59% humidity (which apparently is really low…my friend said it was 91% when she was there). I wasn’t thrilled when I first arrived, I felt like I couldn’t breath, and I had never loved air conditioning more in my life. It’s noisy, crowded, and smelly. Oh the smells…the sidewalks are filled with fermenting vegetables or fish, grilled meat, spicy soups, or deep fried sweets…it’s all over the place. And don’t forget the lovely aroma of soot, exhaust, dust, and the faint scent of stale urine in some places. Every step you take you’re confronted by a tuk-tuk driver, a merchandise seller, or a construction worker. It’s like walking into a sauna with all of the most annoying things about a city crammed in with you.

Despite all this…by the time I left Bangkok (which was very quickly), I actually came to appreciate it. In it’s own special way. With just two nights to spare in this zoo, Nathan and I were both pleasantly surprised how well everything went. We just sort of rolled with the chaos, and despite being without a map we made our way around pretty well with a little bit of research before leaving the hotel. 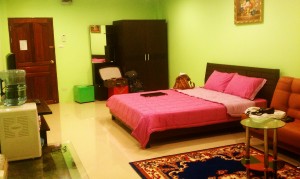 We chose to stay at Paneng Palace, which I have to make a mention here because they deserve it. When I arrived, a hot, sweaty mess, the receptionist quickly offered me an iced bottle of water while we sorted the check in process. Our room was really clean, really big (it even had a long couch in it), and really shiny. For $17 a night, AC rooms, a 24 hour security guard and a million security cameras, we chose this hotel because it was between the two embassies that we needed to go to. They were super helpful (went out with me find a converter), let me use their printer, and promptly to responded to anything. It’s not in the throws of the tourist areas, but I appreciated that as well. It was still easy to get around, as it was near the MRT subway line, but I felt like we were really among the locals. The Khlong Toei Market was right around the corner, and that was definitely an unforgettable experience.

A visit to Bangkok wouldn’t be complete without a visit to a wat (buddhist temple) and a floating market. Since we’ll both be flying to our next destinations from Bangkok, if we miss anything we’re dying to see, we’ll check it out on our way back.

After getting around town and seeing some sights, I am finally getting the feel of being a tourist again. Lots of pointing, hand gestures, smiles, and laughs. The one thing I’ve had to come to terms with though is the obvious underlying poverty of the area. The area we stayed in was more of an industrious business area, but seeing the construction workers, with hardly any safety gear on (unless you count a scarf to block dust), mangled malnourished street dogs, among the suited men and women was sad to say the least. And if that wasn’t enough to make me stop and think, leaving Bangkok on the train forced me to face some reality. 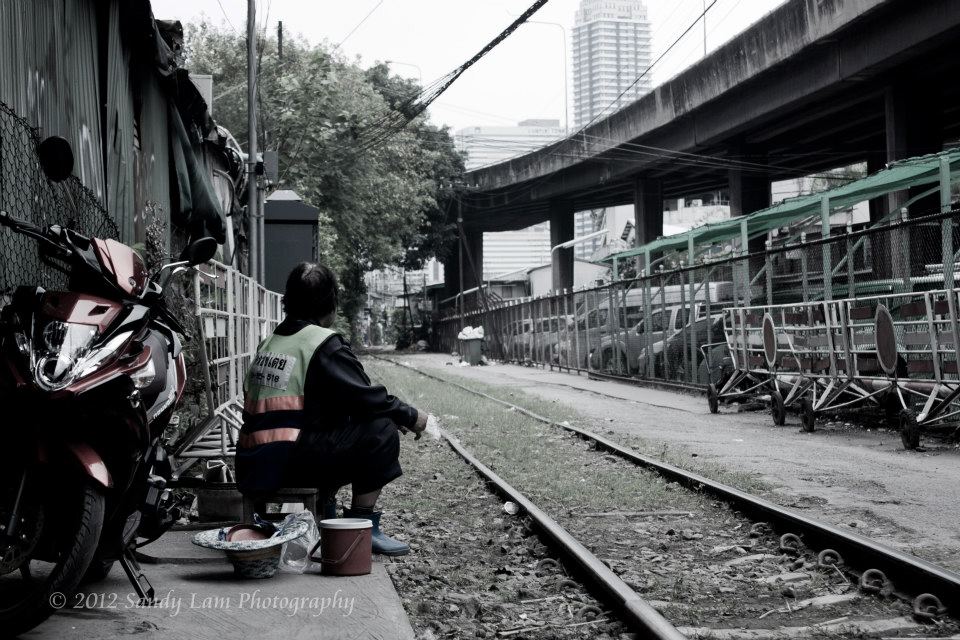 Within minutes of pulling out of the Hua Lampoung train station, groups of children in tattered/dirty clothes were skipping along the other set of railway tracks. Playing among each other with their toys, they were obviously not far from their homes, which were just on the other side of the tracks, and nothing more than shacks built out of leftover sheet metal or plastic or old draped fabrics. Even the mothers of these children sat with them in a circle right on the tracks, playing with each others hair, laughing and talking with each other. Just beyond their homes were 10 story condos and business buildings.

Being that I grew up in a privileged safe area of Seattle and never really seen poverty besides the homeless in downtown Seattle, this came as a shock to me. It was shocking mostly because I had never considered it. I know that when I go to India, this will probably be the most difficult culture shock I will have to deal with, but I never considered Bangkok to have such an obvious population living in poverty. It made me sad because it seems so wrong to have such a despairingly large gap between classes. That these poor children, who may never really get a chance to live beyond what they are living in now, made me really take a moment to think about how lucky I am and appreciate the wonderful opportunities that are provided to us in the states. And I can’t help but feel incredibly guilty through all of this. How can I go home and back to my “normal life” without doing something to help such a cause? What could I even do to help such a cause? It’s moments like this where I feel extremely small and insignificant and helpless.

At the same time you hardly ever see these people without a smile on their face. Everyone is so helpful. Even if they can’t speak English, have nothing to gain from you, they still go out of their way to find someone who can help you. What a wonderful community. I am humbled by what I have seen in Bangkok so far, and only hope that by the time i leave this country I will be able to appreciate more and be able to give back to some of the community.