Finally, the painstaking wait was over. I was finally out for a weekend with my favorite backpacking group. A year an a half passed before I could be reunited with Jamie, Kevin, and Bill out on the trail, but as soon as we were all packed into the car together, it felt like hardly any time had passed at all. I love backpacking with this crew because we always somehow end up on the craziest/fun/beautiful adventures together like the very first time we backpacked together to Marmot Pass.

I’m not going to lie, I was a bit worried. Despite my hard work on the vineyard, it was hardly like carrying a 40 lb pack uphill 8.5 miles over 4,000 feet in elevation. But I trust the guys to not leave me in the dust (or snow).

After a bit of mapsterbating over crepes, we made our leasiurely start towards Stevens Pass. Thunder Mountain Lakes is like a secret little oasis that you need to take a boot pack trail into off of the Pacific Crest Trail. But before we could get to the Pacific Crest Trail we had to start from a forest road and hike a trail up to Hope Lake before meeting up with the PCT. You can find the boring directions here.

The trail to Hope Lake was steep and short…1.5 miles I believe. The bugs, were AWFUL. The trail didn’t consist of that many switchbacks and seemed relentless without any parts of the trail that leveled off. Although on the way back it didn’t seem as steep as I remembered (clearly I’m out of shape). We made a quick pit stop at Hope Lake to snack, but the horse flies made it nearly impossible to sit still long. 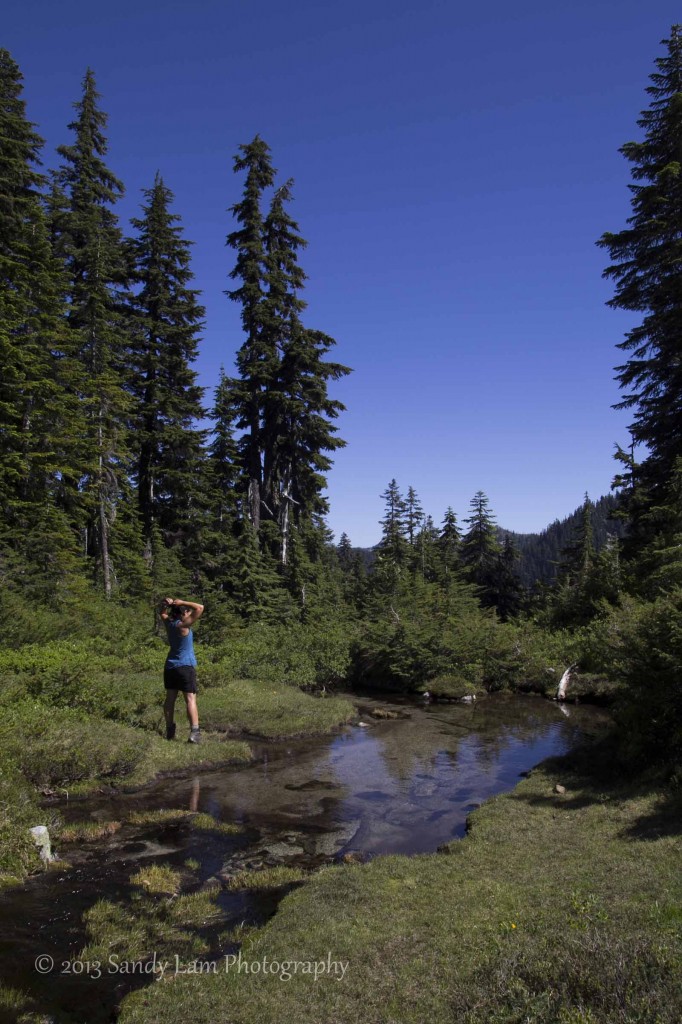 Once we entered the PCT, the trail was much more forgiving and pleasant. I enjoyed walking over the continuously melting snow, grabbing snowballs to chase the guys down with (but they were usually too far ahead) or just to hold in my hand. It was a nice refreshing contrast to the dry heat. The trail was so beautiful, I wish I had taken more photos but I was usually too busy trying to keep up. 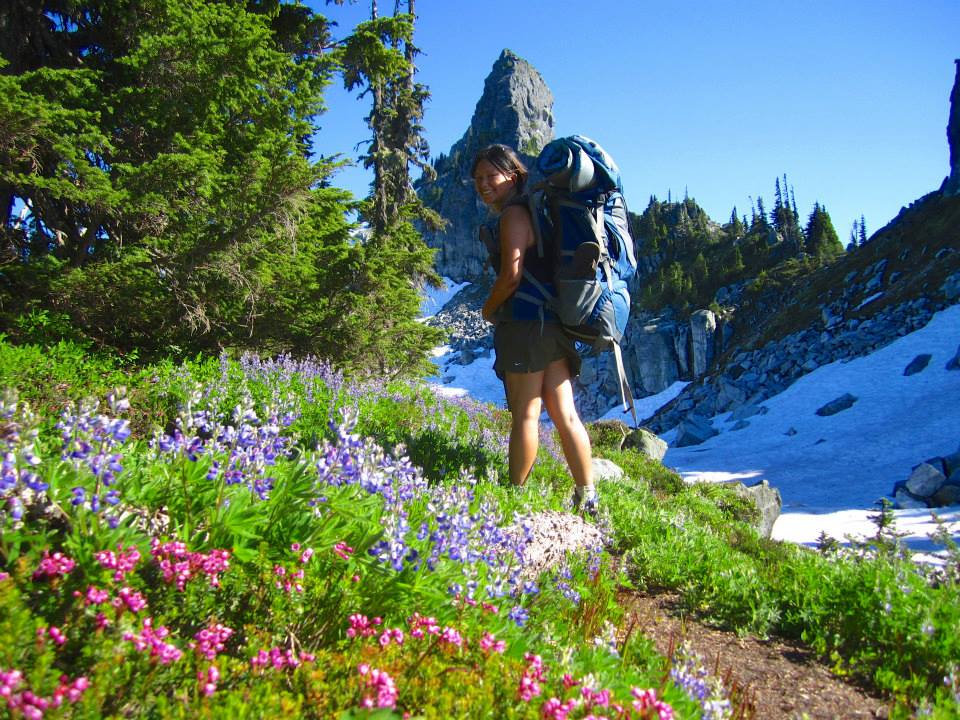 Almost there! Among the wildflowers. Photo by Jamie Hood.

When we took the off trail path after coming to Trap Pass, the last mile of the trip went a bit slower as we had to find the path (based on the clues our nice friend Matt had given us) and hike through trees and some narrow edges. When we finally came to our first snow field, I was sure our camp spot was just on the other side. Indeed it was…but the guys were hoping we could camp down but the lakes, so off we went. Eventually I was got pretty burnt out and the guys decided to just head back to the originally area to set up camp. 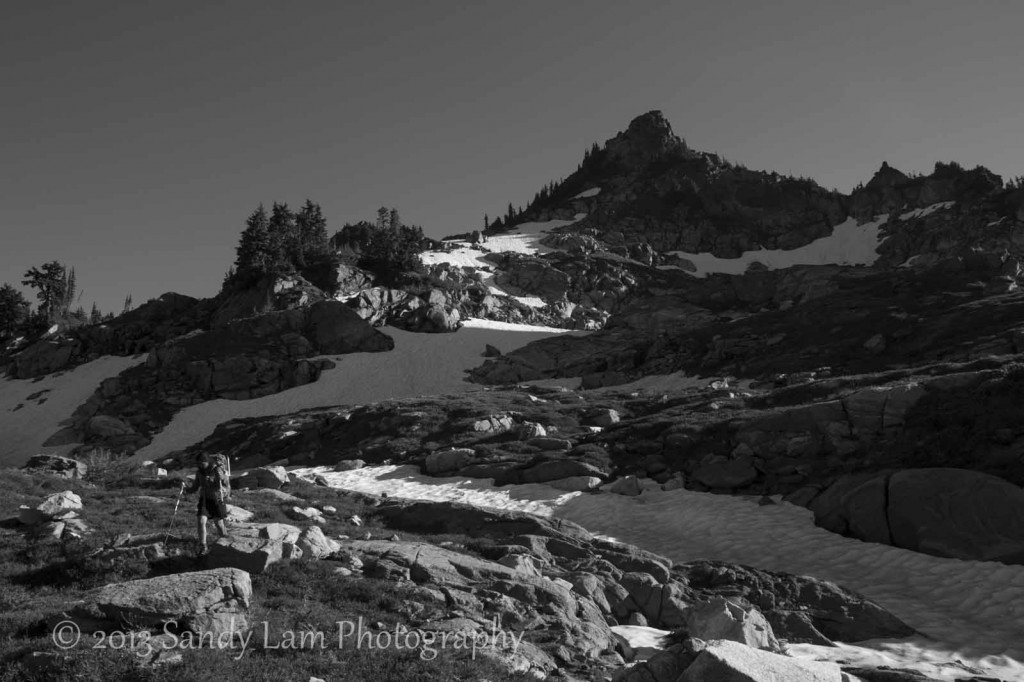 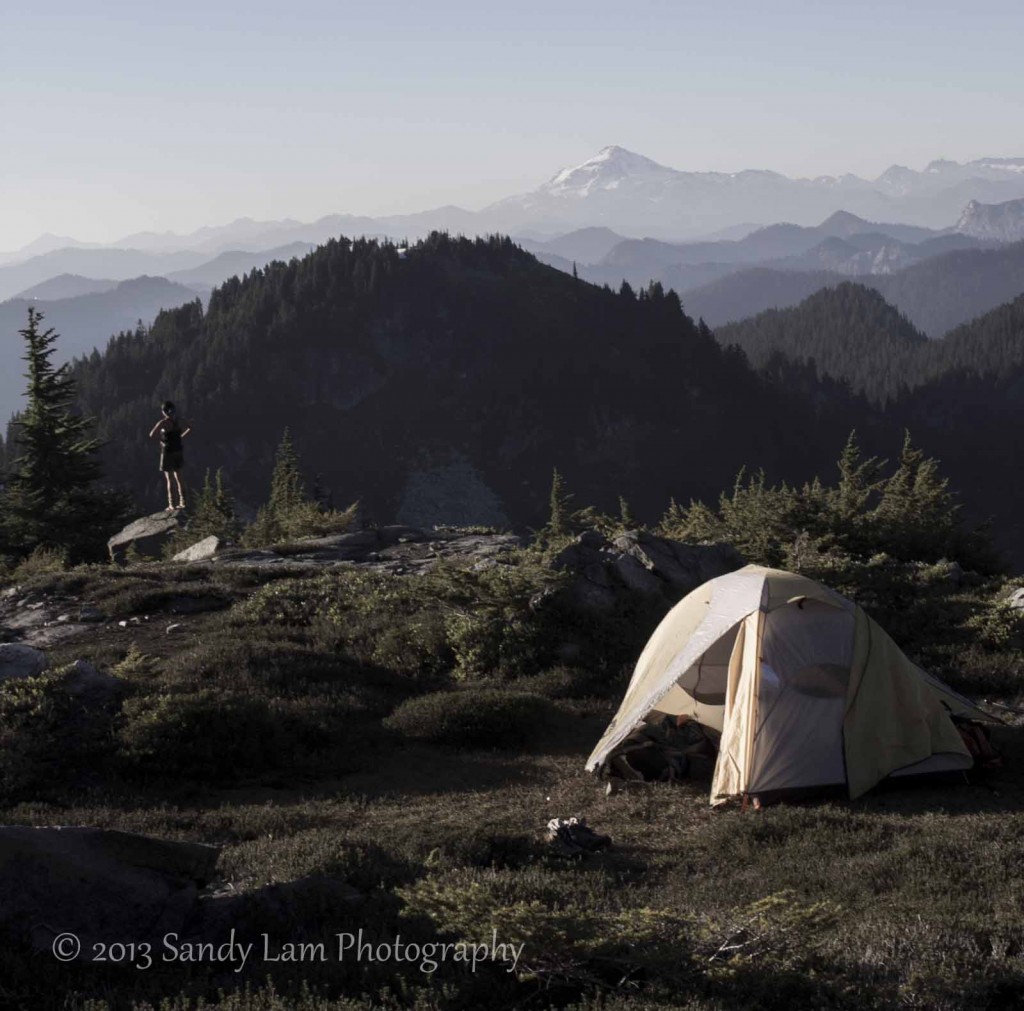 This was the perfect spot because we had a view of Glacier Mountain, a beautiful ridge for the sunset, and we could see mountain peaks for miles. I believe we were camping around 6,000 feet, but the bugs remained an issue most of the trip, and luckily during our first night, the wind stuck around MOST of the time to keep the bugs off, but it was pretty hard to sit still. We ate dinner before sunset and had plenty of time to run around and explore, so Jamie and I had a great time basking in the sun light and taking photos.

Dinner with the moon peaking out. 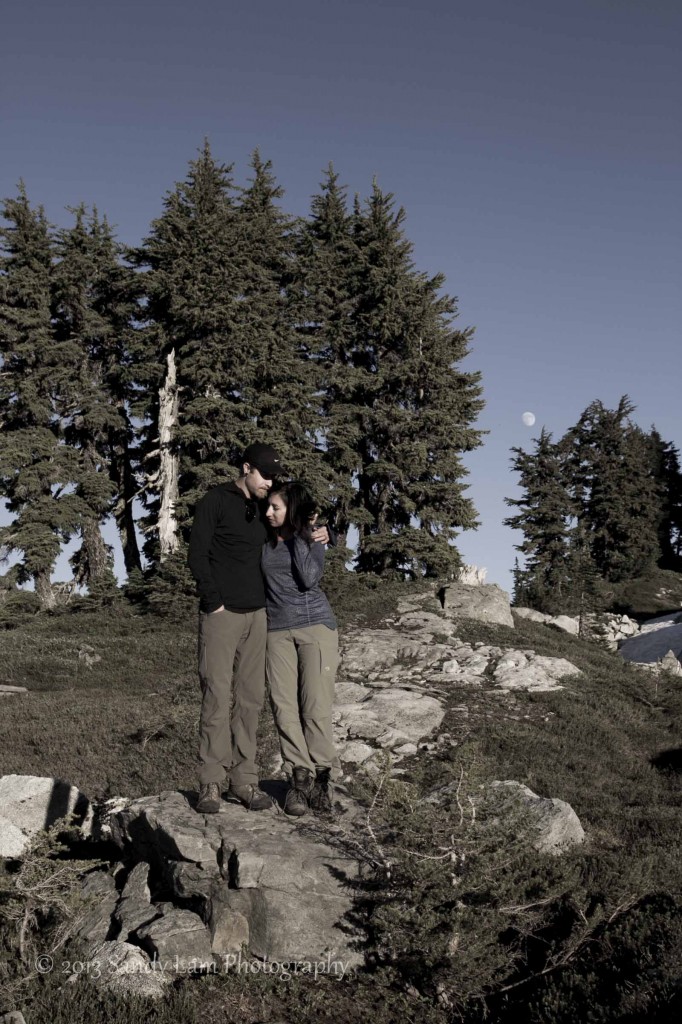 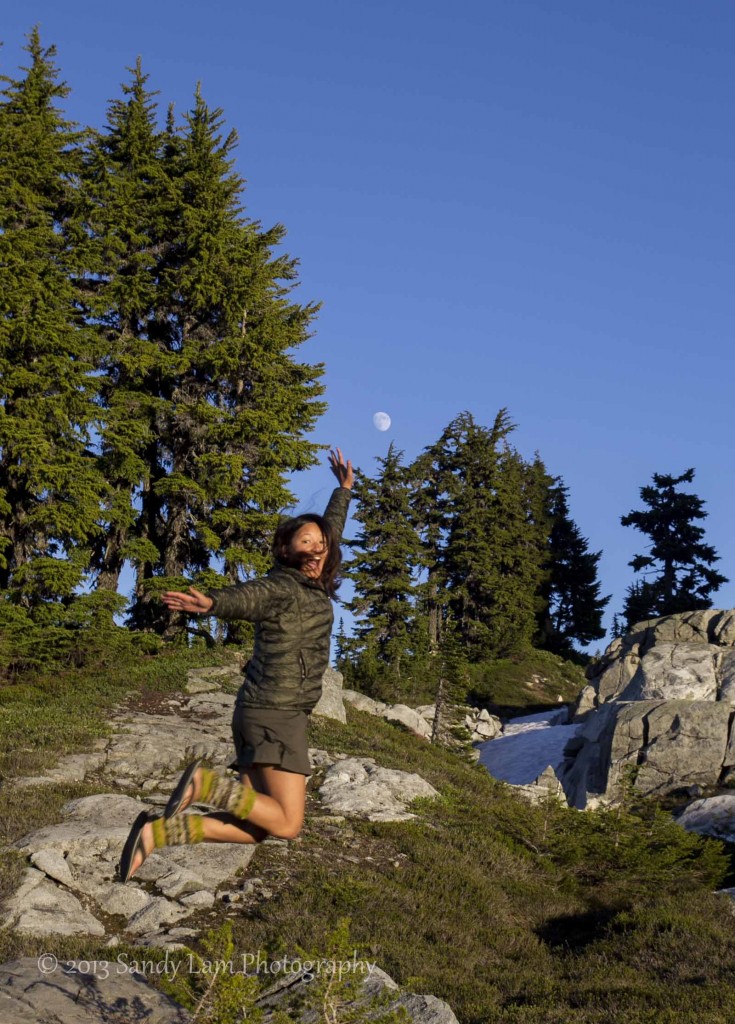 Note to self: Don’t try to jump from a rock in flip flops onto slippery grass. 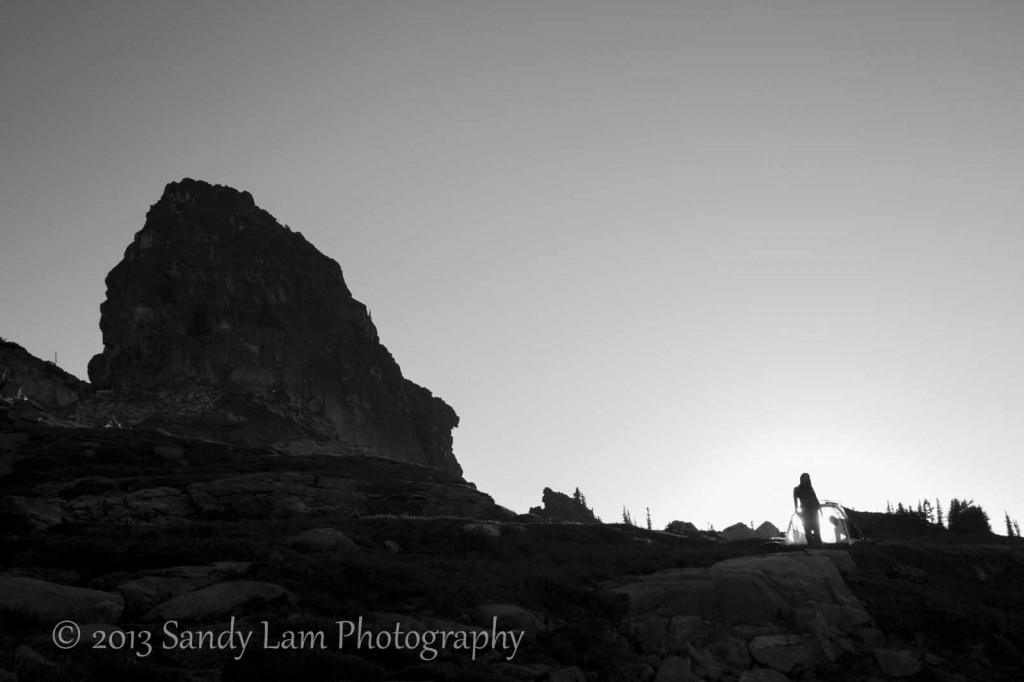 Jamie on the ridge. Kevin crawling into their see-through tent. 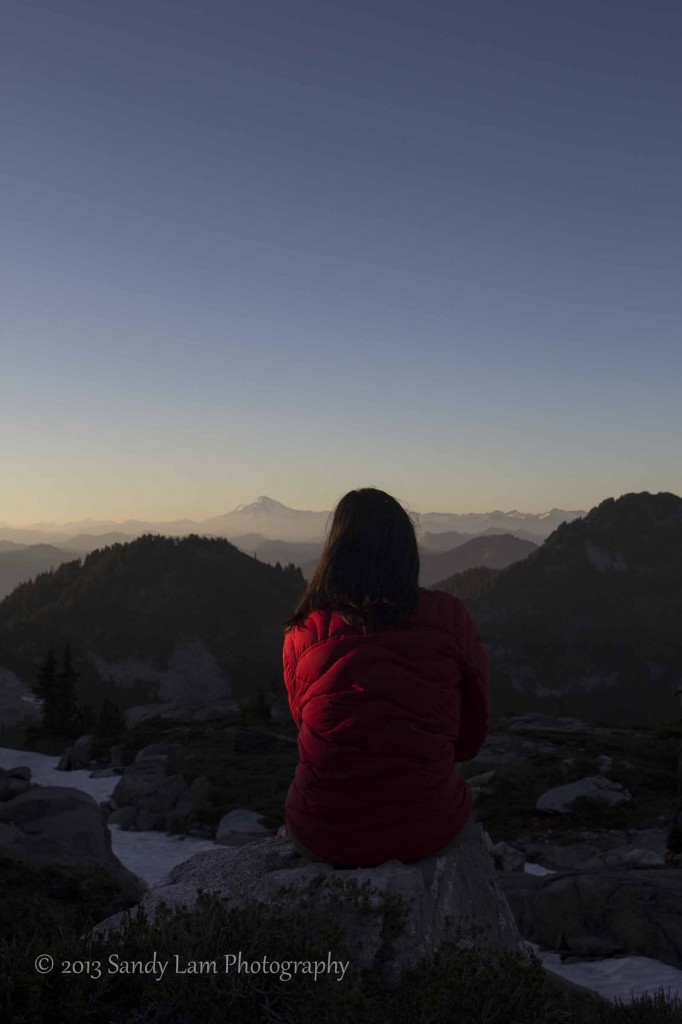 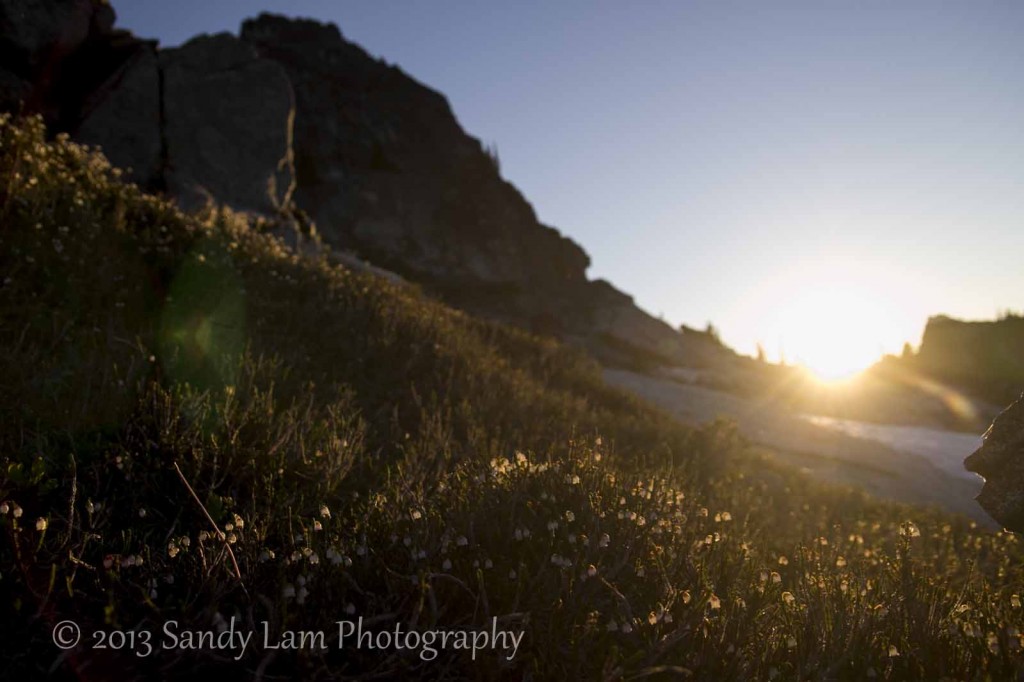 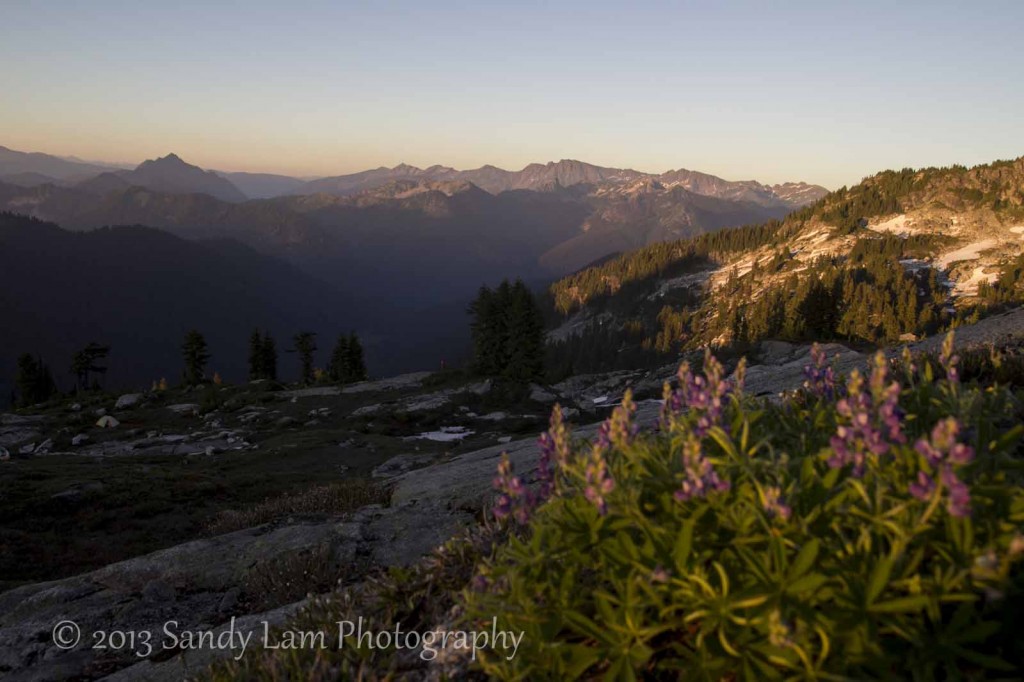 Everyone but me on the ridge. 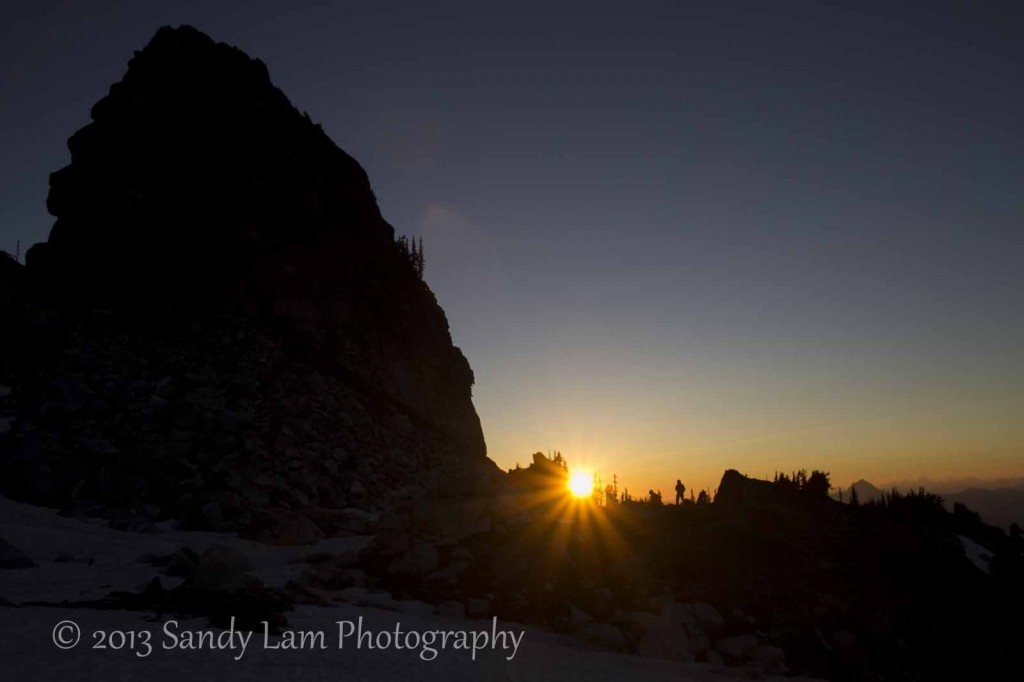 The next morning we headed up a up a couple snow fields and peaked over a couple ridges. The weather was perfect, but the bugs were relentless. No amount of deet could keep those things away. 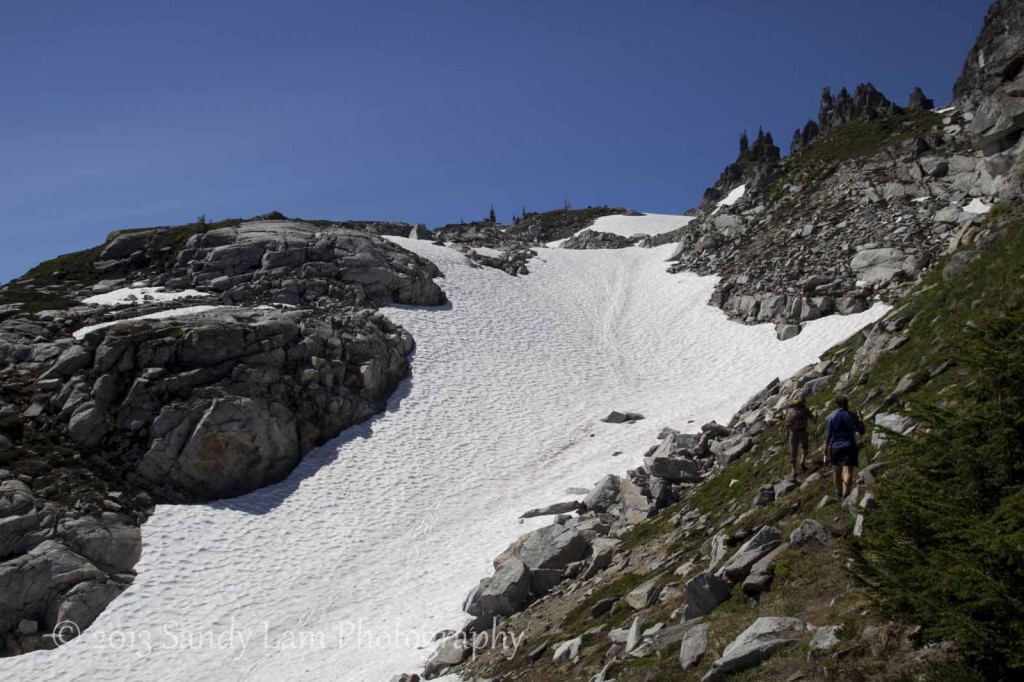 It was a short walk…only about half a mile to a mile at the most away from our campsite. But the view was absolutely breathtaking. The alpine lakes surrounding Thunder Mountain were crisp and inviting.

I quickly snapped photos from above but was much too excited to jump into the water. I braved the waters by walking in quickly and climbing up onto a rock, but eventually I found the perfect rock just below the surface of the water. I knew it would make a great yoga photo so I asked Jamie to be my tripod to get this awesome walking on water type of photo. 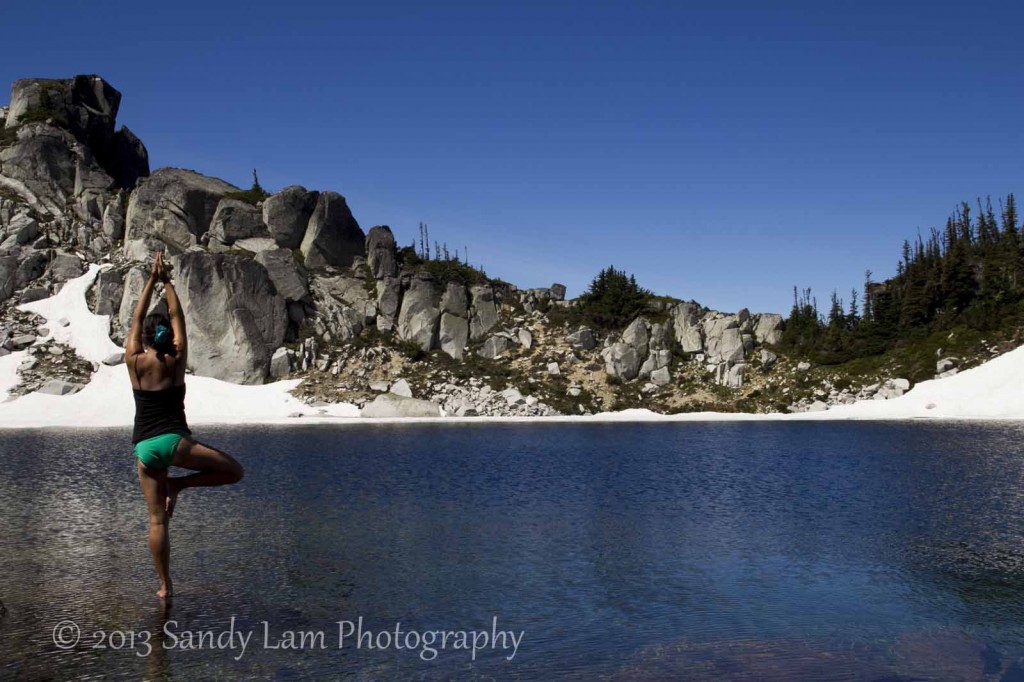 Yes. The water was FREEZING. It was still partially frozen around some of the edges. But if you know me at all, that won’t keep me from jumping in. Here we go! 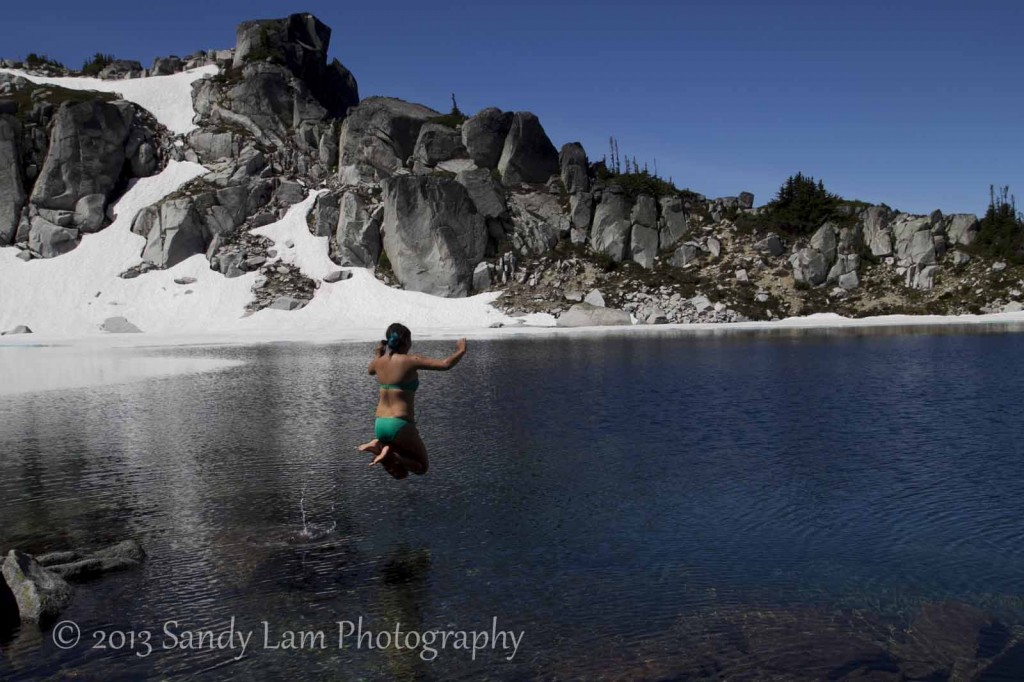 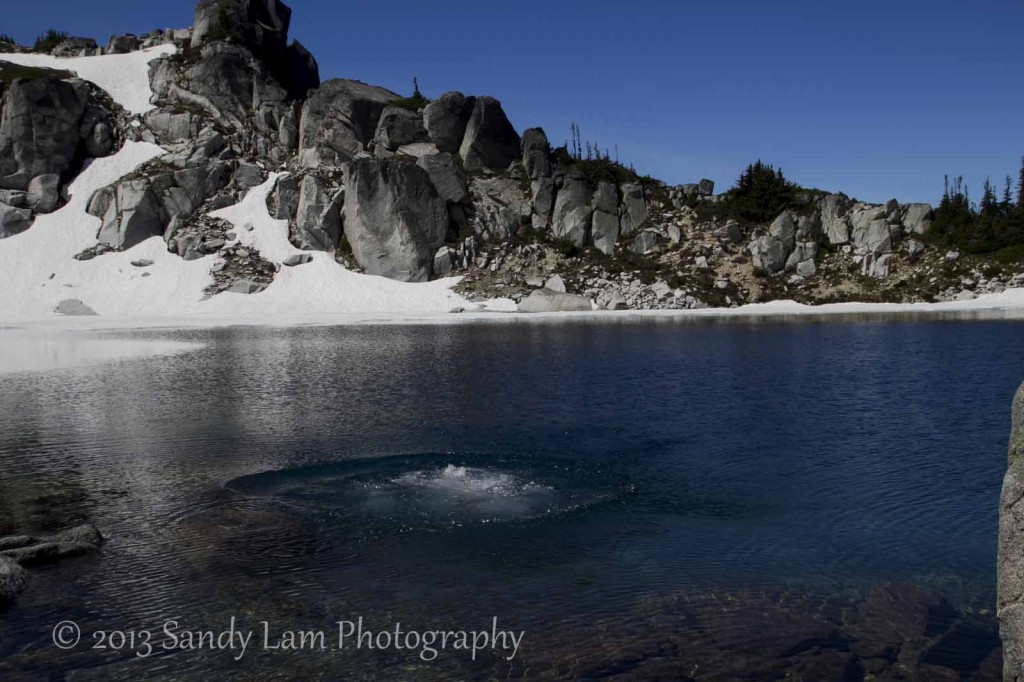 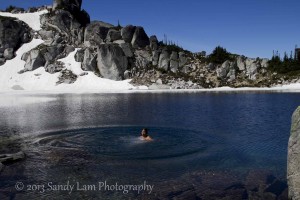 Clearly I’m in a bit of shock.

Eventually I inspired everyone else to jump in. Haha. That was really fun. 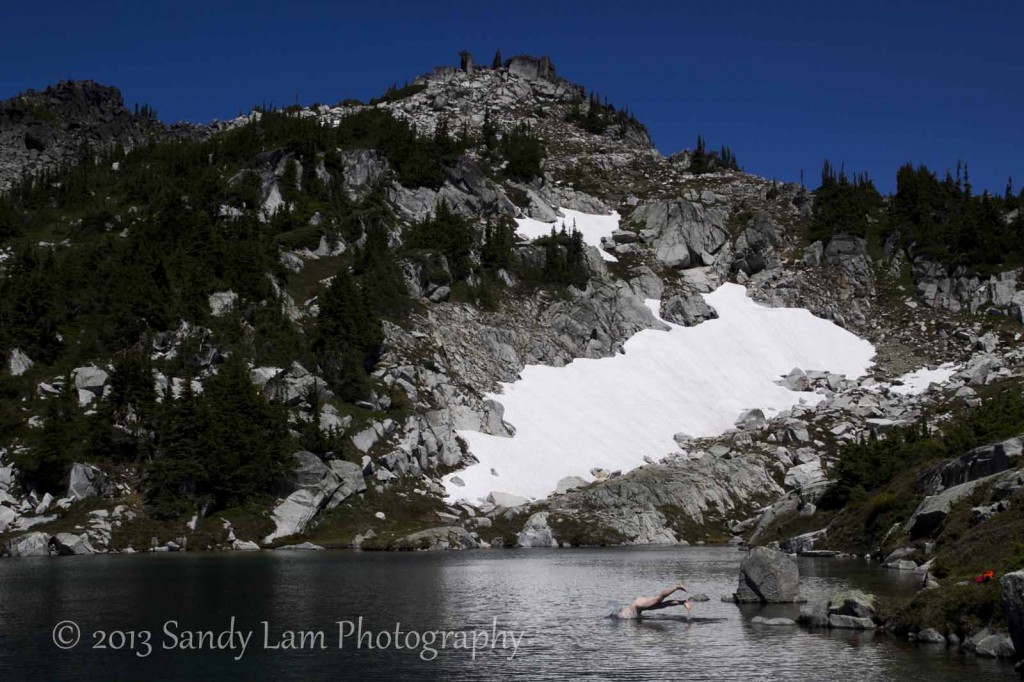 Jame and Kevin climbed the last bit of Thunder Mountain but I decided I wanted to be a salamander and lay out on the rocks near by and do some of my own exploration. 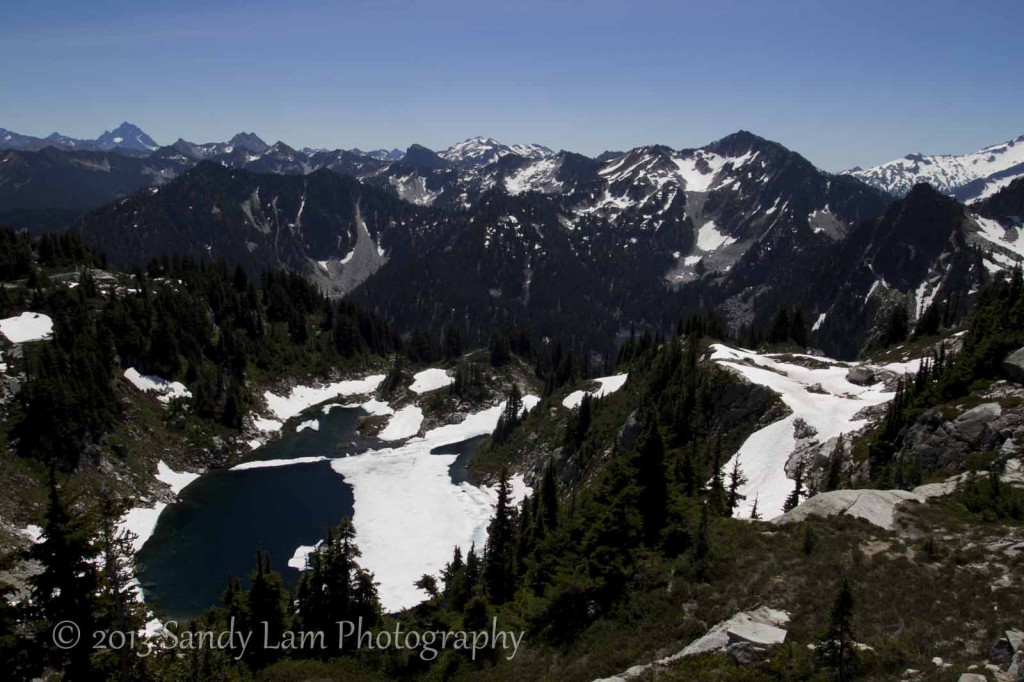 How many people jump over mountain ranges in swim suits? 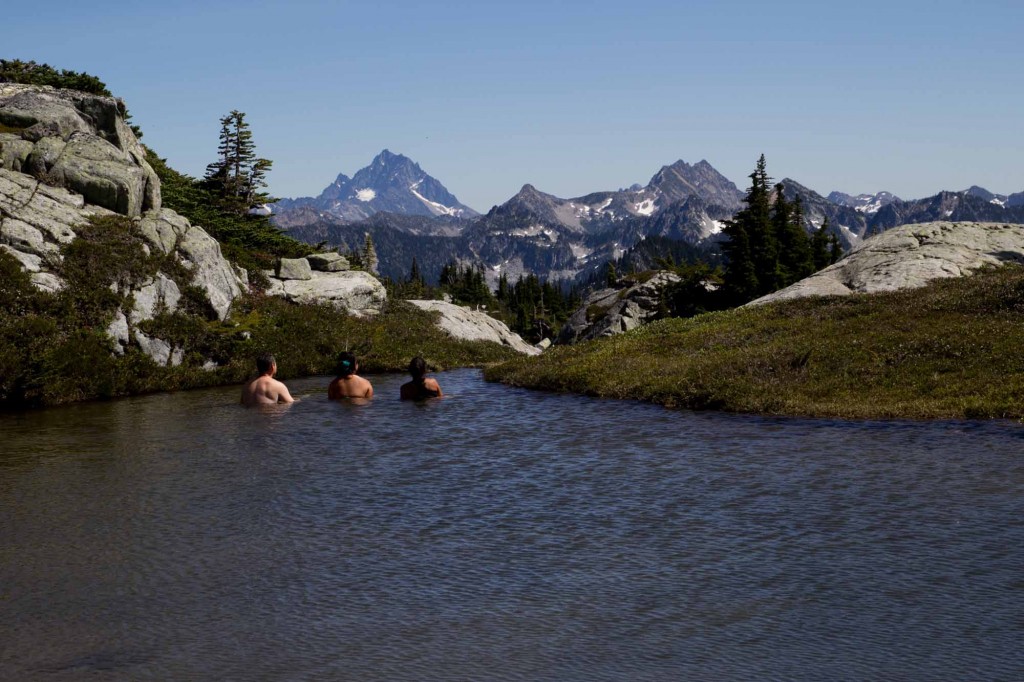 Man I love the Pacific Northwest. 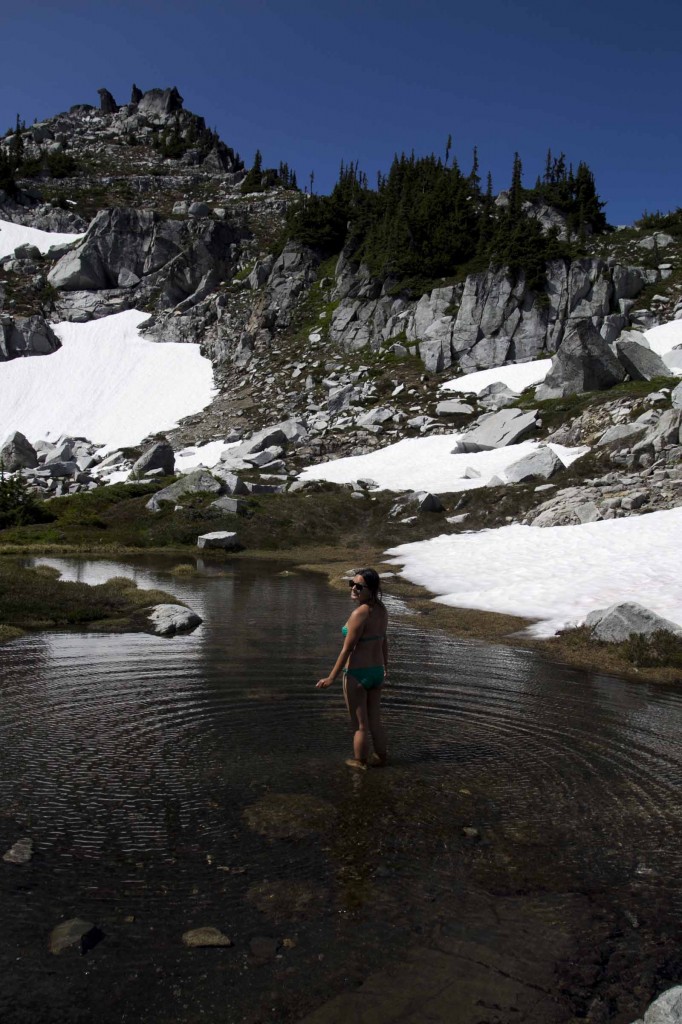 Sliding down the snow fields was extra fun (for me) and unfortunately we spent a good chunk of the late afternoon holed up in our tents to hide from the bugs. Seriously…they were that bad. I think I counted over 20 bites on just one of my arms.

Despite the bugs, it was fantastic trip and highly recommended. We only saw a handful of people over the course of the weekend. The only other people camping up near where us were a whole other ridge away. Most hikers camped down at Trout Lake (right before Trap Pass) so we felt like we had the whole mountain to ourselves. A decent 18 mile weekend of exploration and fantastic people.