Tasty triumphs (and half a food fiasco) for weeknight dinners It’s been quite a while…I apologize. But here we go!

I’ve been on a health food binge lately since I’m training for a half marathon and tryin got make a couple lifestyle changes. This healthy version of a soft taco was really simple, and tasty. I don’t believe in coounting calories so if you’re already looking for that, just stop. But here are the ingredients (which were all from Trader Joe’s by the way)! Try to imagine this folded up (sort of hard to fold it up and take a picture at the same time).

– Ground Turkey sauteed with onions, mushrooms, and taco seasoning (A much better alternative to ground beef)

– No cheese, because I wanted to see what it would be like without it. Normally I would say I always need cheese, but I think the avocado and chile salsa made up for it. It was delish.

Then of course, because I had been eating so well, I ruined it by making a crazy awesome vegetarian lasagna. 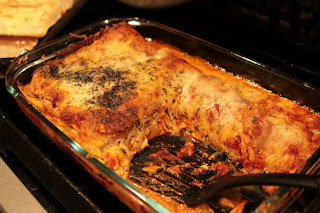 I had some crazy times at work and the day all the stress went away I wanted to make something awesome to celebrate. 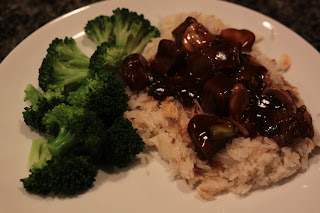 I wanted to do a teriyaki salmon, but salmon was too expensive. Then I was going to do chicken, but then I noticed the steak was on sale. So that’s what I bought instead. And then I just sort of threw together what I thought would sound good. I marinated the steak cubes with some oil, rice vinegar and black pepper. Then I sauteed some onions and mushrooms. Heated up some honey, mixed it with some soy sauce and sugar, and threw in the steak and cooked it all up. What went wrong was that the steak overcooked and ended up being too tough, and I think some pineapple would’ve been really good. I threw in some green onions which were definitely a good choice. Sesame seeds probably would’ve been good too. But oh well. Not bad for a cheap meal – and a good learning experience.

My favorite part was the chicken rice. Which is my mom’s recipe. I cooked regular white rice with chicken broth instead of water and tossed in some deep fried onion bits when it was ready. Mmmm it smells fantastic and I highly recommend it. Usually really good with other chicken dishes.