I love southern food what can I say? After New Orleans, I’m completely addicted to everything related to it. (Which as a side note, heard a great song down at the Farmer’s Market today called “Freedom Song”, which apparently was written by an artist with several children after Hurricane Katrina. You should listen to it, if you get a chance, it’s touching. The band was also a great group of people that made my afternoon) Any way, I’m still determined to find the best southern food in Seattle. So far…no luck. Let’s start with the worst and end on a good note.

Casper’s in Shoreline
My coworkers and I are always excited anytime a new restaurant opens up near our building in Shoreline, because good food is hard to find within close range there. Casper’s moved into our neighborhood from Lake City Way, to replace a Wendy’s. It was a rather interesting set up. Having southern food at a fast food restaurant didn’t quite feel right, but I must say, the toilet plungers on the counter tops to hold up paper towel rolls, made me smile. That kind of quark is part of why I love New Orleans so much. Our waitress told us the restaurant moved from Lake City because no one could find the restaurant because it was so small and out of the way. Expansion seemed like a good sign as well. I was pretty excited to be put into a food coma, because we all know that’s what southern food does to us. I ordered the Pulled Pork Sandwich, Mac and Cheese and Coleslaw. But of course I had to have some cornbread so I asked if they served honey butter with their cornbread. Our server replied with a very enthusiastic southern drawl, “OH you betcha we got honey butter. You know what’s good for ya!” Ecstatic for my honey butter and spicy cornbread muffin, we waited. And waited. And waited….to wait to put our order in.

Now, I understand sometimes things slip. This would be one of those times. I watched our server carefully and she was quite attentive to everyone else in the restaurant, seating them, taking their orders, serving their orders, cleaning up, she was on top of it…except with our table. I think she just forgot about us (walked by us quite a few times without even looking in our direction so we could signal to her that we were ready to order). She apologized when she realized she had forgotten about us…a good 20 minutes later. A good 20 – 30 more minutes later, our food was ready. Now, I’m pretty sure this restaurant also serves at the drive through window…so I’m not sure if there were just 100 other orders at the drive through window that got in before us…but I’m pretty sure that was just plain ridiculous.

When our food finally arrived, I was terribly disappointed with what our server referred to as honey butter: two COLD individual tablets of butter with little packets of honey (like…the stuff you get at KFC). That in itself did not make me very happy. On top of that, the cornbread muffin was COMPLETELY overcooked and dried out…it was dry and mealy in a very uncomfortable way. It would’ve taken 4 or 5 tablets of butter to soften that thing up. So then I moved on to my next favorite side: Mac and Cheese. I was utterly beyond disappointed and slightly disgusted to be honest. While the penne noodles looked intriguing, the mac and cheese would be what I refer to as on par with frozen mac and cheese or Safeway Deli Mac and Cheese. Actually I would say frozen Mac and Cheese was better than that. It was DEFINITELY not southern mac and cheese. So then on to the Coleslaw…that was at least decent. But then again, it’s a little hard to screw up Coleslaw. The Pulled Pork however, was FANTASTIC. While I’m not sure about the BBQ sauce (a bit too vinegary for my taste), the pork was tender and the portion was great. It was flavorful even without the BBQ sauce. I enjoyed it very much. 🙂

But in the end, I’m afraid I can’t give Casper’s a high rating at all because most of the food I tried was not tasty in my opinion, the service wasn’t the greatest, and it just didn’t encompass southern comfort. Actually halfway through our meal we noticed the owner Casper himself was sitting just a couple tables away having lunch with a friend. What surprised me was how he paid no attention to the fact that our table of four had been completely ignored for almost 1/2 an hour. I would just hope that in the future, we could luck out on better service. I’d be willing to go back and try other items though. Because every restaurant deserves a second chance.

Smokin’s Pete’s BBQ
After much hype, I was interested in trying Smokin’ Pete’s BBQ, which is located in Ballard. I’m hoping that one day I find a southern restaurant that will just let me have as many sides as I want. My problem is that everywhere I go, I always want more sides then I am allowed with my meal and I end up paying far too much for my additional sides and of course getting way too ridiculously full. This was my first problem with Smokin’ Pete’s. I probably spent a good 85% of my time with the menu just trying to figure out how I can get the most sides for the least amount of money. 🙂 I just wanted a taste of everything! 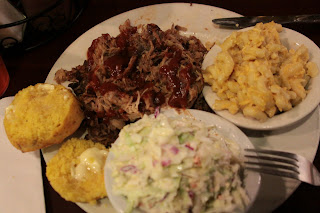 Service is easy at Smokin’ Pete’s you walk up and order your food and then sit down. The food comes right to you. I ended up with the Pulled Pork Sandwich and a side of Coleslaw. And then I paid for an additional Mac and Cheese, because frankly, I just can’t pass up Mac and Cheese anywhere I go. One feature I found very distinctive to Smokin’ Pete’s is their Sweet Potato Cornbread Muffin. While I was disappointed their honey butter was not quite the honey butter I envisioned (in next review you will see why I am so adamant about this honey butter), it was at least moist and tasty. The Mac and Cheese was Superb and the Coleslaw wasn’t anything extraordinary but it was good. The pulled pork had a wonderful smokey flavor, however I did not have anything to rave about after. I think the place might have been hyped up a bit too much for me. The food is great, the portions are insanely large, and overall a great place, I just wasn’t completely wowed in any particular way. 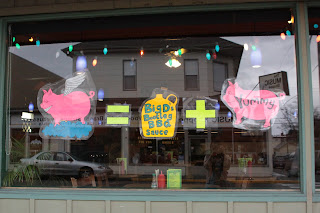 This review comes far too late…but it still deserves to be written. Speak E-Z’s, which is located in Bellingham, WA is actually the place that introduced me to REAL fried chicken. I never thought I would find tasty southern food in Bellingham, but here it is. While some of the items are hit and miss…Speak E-Z’s has always had a special place in my heart. It recently had to shut down a few weeks ago because it just wasn’t doing that well, which breaks my heart. Especially after getting to know the owners, Rosie and Dennis. They are quite the most unlikely couple, but together they are fantastic. Rosie, short and petite German woman, with curly locks and the cutest accent. Dennis, a tall commanding African American man from Memphis, Tennesee with a jolly smile and personality to match. Together they ran the show: Dennis cooks and Rosie helps serve. 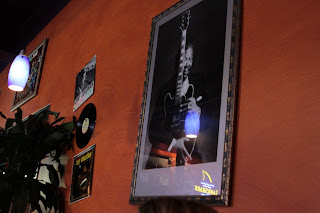 A colorful interior with musical instruments and records decorating the wall, the restaurant definitely has a mom and pop kind of feel to it. I adore it.

My all time favorite meal here is the Fried Chicken, which is just plain fantastic. However, this particular day they were not serving it on their lunch menu. But I never knew how AMAZING fried chicken could be. Haven’t been to KFC since. The star menu item for this resturant in my opinion is actually the Jalapeno Cornbread and Honey Butter. AH – I just drool thinking about it. Words can’t express how delicious this cornbread is, and the honey butter is homemade. Butter that is actually whipped together with honey! Imagine that…mmm it is to die for. When I would come when my friend Ashley was working, I would always ask for seconds of the cornbread. Just *drool* amazing. Here’s a glance at what we had for lunch this day:
I can’t remember what this was to be honest (It’s from January!) I think it was the braised pork sandwich. 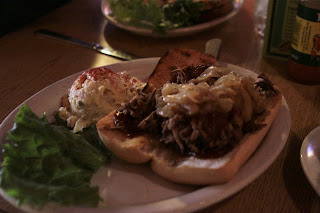 Seafood Gumbo (Sorry I forgot to take a picture when there was actually some soup in there) + Jalapeno Cornbread. 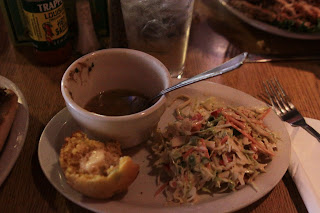 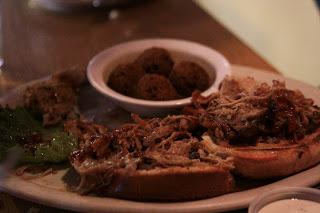 I used to tell people to stop by Speak EZ’s…but now that it’s gone..all I can say is that it will be sorely missed. 🙁