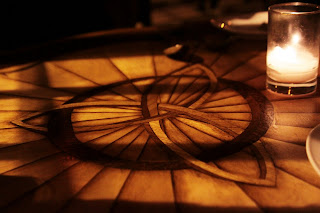 I must say before this review that I am not very familiar with creole cooking…but when I was in New Orleans this past fall, I fell in love with it. Like Ben says to me, “If you were to ever move to New Orleans…that would be the end of Sandy Lam.” Comfort foods to the max. Since my return I have been craving some tasty southern cooking, a bit weary of being able to find something as wonderful in Seattle. Fried chicken here is NOT like fried chicken down there…even at Ezell’s. Although if someone were trying to drag me to KFC, I would pick Ezell’s handsdown.

Any way, my good friend Ben suggested Toulouse Petit for an early dinner for us. All he had to say was cajun and I was hooked. Upon arrival, I was a little taken back by how classy the place looked. Candlelight glow seemed to be the only source of light, until I noticed the glass blown light fixtures above every table and booth. Which was equally as dim. To quote one of my favorite bands (enter shameless plug), The Senate, there was definitely some “sexy ambiance” going on. Actually, the mention of The Senate, isn’t so random for this entry, if it weren’t for one of the members, Nick Drummond, I would’ve never gone to New Orleans to experience all its majesties. So check them out, if you’re lucky you can hear their reunion on Feb. 6 at The Triple Door (my favorite Seattle music venue…I’ll probably write a review after I go in a couple weeks so you can hear how wonderful it is). 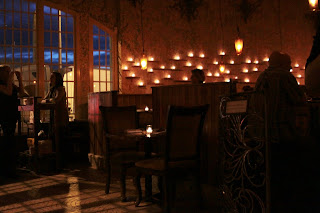 Ok – back to food. So the “look” of the place was impressive. There was a moderately casual level of noise that was a mix of conversations and kitchen clatter, which I liked. Really quiet restaurants tend to creep me out. We were seated right away, as the happy hour/dinner rush was just about to start. As soon as I sat down though, I immediately knew what was missing. Music. The best part of New Orleans is the music. And when I realized what was playing in the background, I was a bit confused. The Shins. The Shins? Really? Don’t get me wrong, I love The Shins, but not in a creole restaurant. After that, the music choice didn’t get much better…so it might just be me (a music lover) being picky, but that part didn’t score any cool points.

The menu however – scores many cool points. Or delicious points actually. Here’s a couple things I managed to scribble down:
* Seared duck confit salad with endive, radicchio and poached egg ($9.50)
* Louisiana blue crab over fried green tomatoes with Tarragon Chive Ravigote ($15.00)
Their seafood menu included four different types of oysters and many other delicious dishes. I spent forever pouring over the menu trying to decide what to eat and learning about the restaurant’s origins. The back of the menu included great interesting facts and thank yous for people who helped put the restaurant together.

One thing that is noticeable about the place is the attention to detail the place has as far as constructing a vibe and atmosphere to the place. Which I think is something I noticed when I was in NOLA. Each store, restaurant and bar I visited had it’s own vibe. Their own creative twist – like each store was a reflection of it’s own distinctive personality. Perfect example: Coops. Which really deserves another entry of its own so I’ll have to explain that one another time. According to the menu, there are 85,000 moasiac tiles on the body of the floor of the restaurant, 712 panes of glass in the windows, and 40,000 glass tiles in the platforms of the booths. Toulouse Petit employees have tasted tested over 3,000 wines during the year it was in construction to hand pick an impressive selection of wine. Being the wino that I am, I was about to order a glass, but noticed Abita Amber on the menu. I immediately ordered one, since I seemed it was so fitting. My second drink in New Orleans was an Abita Amber, which came recommended by my friend Nick. I’m not a beer drinker at all (in fact it’s only within the past couple of months I have come to somewhat like the taste of it, and even then I can only stand a pint of it), so the fact that I like this New Orleans brew says something to others like me. 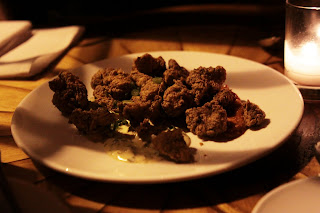 So that was an easy pleaser. We started with some Spicy Deep Fried Alligator with white and red remoulade sauce. I’ve never had alligator before, but I liked it! It was like a cross between chicken and seafood. Sweeter and lighter than chicken, but with a similar meat consistency. I’ve also never had remoulade sauce, but it’s wonderful! The white sauce had a creamy, buttery, green onion base and the red was similar to a spicy, but chunky hot wing sauce. Ever had a 7-Alarm wing? Well it looked like that, smelled MUCH BETTER, and was no where near as spicy as that horrid thing. We also nibbled on some french bread with honey butter before our food came. The honey butter wasn’t the greatest, but hey – it’s honey butter and it’s hard to complain about honey butter.

For dinner, Ben ordered Crawfish Etoufee (dark roux French Quarter classic, served over creole basmati rice with scallions and Parsley). For $14.50 you could have what’s seen below! 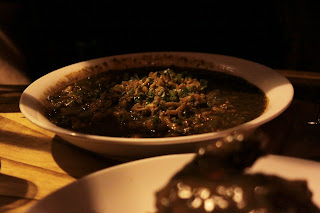 I had a Buttermilk-fresh Herb Fried Game Hen with a Black Pepper-Tasso Gravy (A sexed up version of the ubiquitous southern favorite with pureed potatoes and mini buttermilk biscuits) $14.00 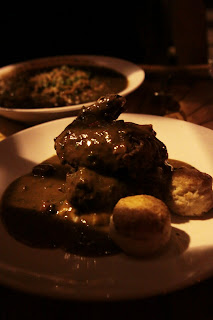 Taste: Definitely hearty – definitely creole. The gravy sauce on the hen had just the right spices. The potatoes were pureed but not to the point where I was wondering if this came from a powder in a box, they were just slightly buttery, and balanced out the incredibly flavorful hen and gravy. Oh man – it was delish. The mini biscuits were hardly flaky, in fact they were quite moist with almost a cake like consistency. I wish I had saved some honey butter for them. From the bite of Ben’s Crawfish Etoufee that I had, it was pretty intense, but probably can’t say much more than that.

Overall, I liked the place. The food was good, service was prompt, and the atmosphere was great. Those are my essentials for restaurants. However, what scores cool points in my book are authenticity, creativity, and price. While I enjoyed the classy but casual atmosphere, I didn’t really feel like it was a southern resturant. The atmosphere reminded of a place that Nick and I were literally hoodwinked into. I can’t remember the name of the restaurant but somehow Nick and I got talked into from the streets to dining at this snazzy looking place – only to find the food was incredibly disappointing and pricey. Lucky, Talouse Petit has MUCH BETTER food and I didn’t feel so cheated when I left the place. Maybe I’m just expecting too much, but I was hoping the vibes I would get from the restaurant would match my feelings for NOLA. I guess it might be too much to expect to have the same experience, but it is how I feel.

It definitely runs on the pricier side, but I’ve paid more, for food that wasn’t as fabulous as this. The portions are large, but not too large. The service was prompt, but not genuine. The overwhelming menu and attention to detail scores many points in my book though.

*One thing to note though, make sure you are not seated by a window next to the street. A street light kept flickering on an off and since the place had such low lighting, it was really irritating to have your eyes adjust so often while you’re eating.