What do you get when you combine, delectable smoked meats, fine whiskey, and a staff with awesome tattoos? Radiator Whiskey. If you’re a girl who loves her whiskey, but doesn’t always enjoy the company of dodgy drunks from the dive bar down the street, this is the place for you. If you’re a guy, don’t worry, there’s beer for you too. 🙂

Bourbon Margarita. Oh yeah. And popcorn in back! 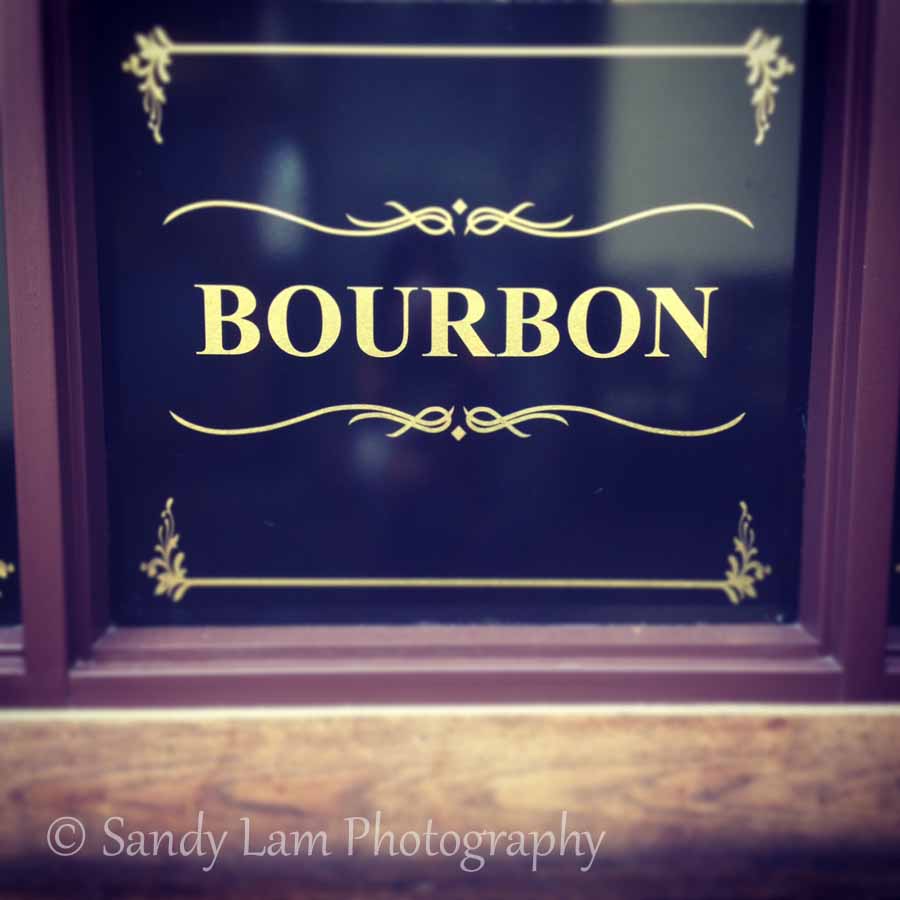 Don’t get me wrong, I love my dive bars. Anyone who knows me, know I speak very highly of The Sloop Tavern. But man…do I love me some whiskey. Sometimes I just want to sip on some tasty bourbon and read my book in the corner, without having to worry about some cheap drunk spilling his drinks all over me. 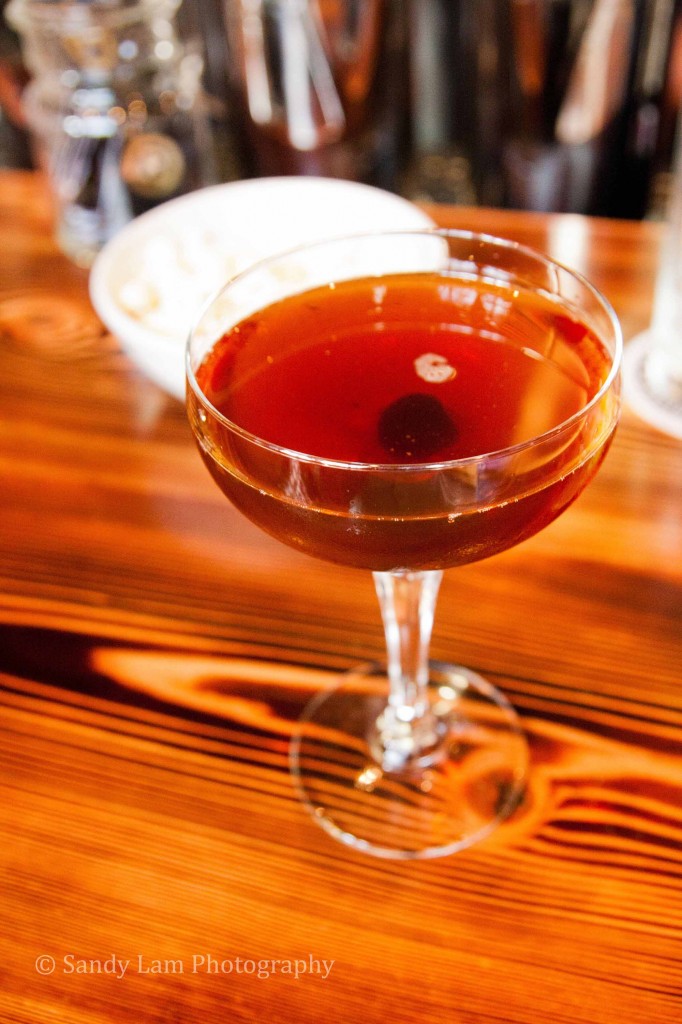 When Matt’s in the Market owner, Dan Bugge told me about his new whiskey bar opening right across the hall, you betcha visiting it was near the top of my list of things to do when I returned to Seattle. Dan partnered with chefs Tyler Palagi and Charlie Garrison to produce this glorious place. Home to pig heads, tots, bourbon and more. It’s classy, tasty, and just all around badass. While they were originally looking at a West Seattle location, I’m glad they ended up at Pike Place because I wouldn’t be able to make the trek over there so often. 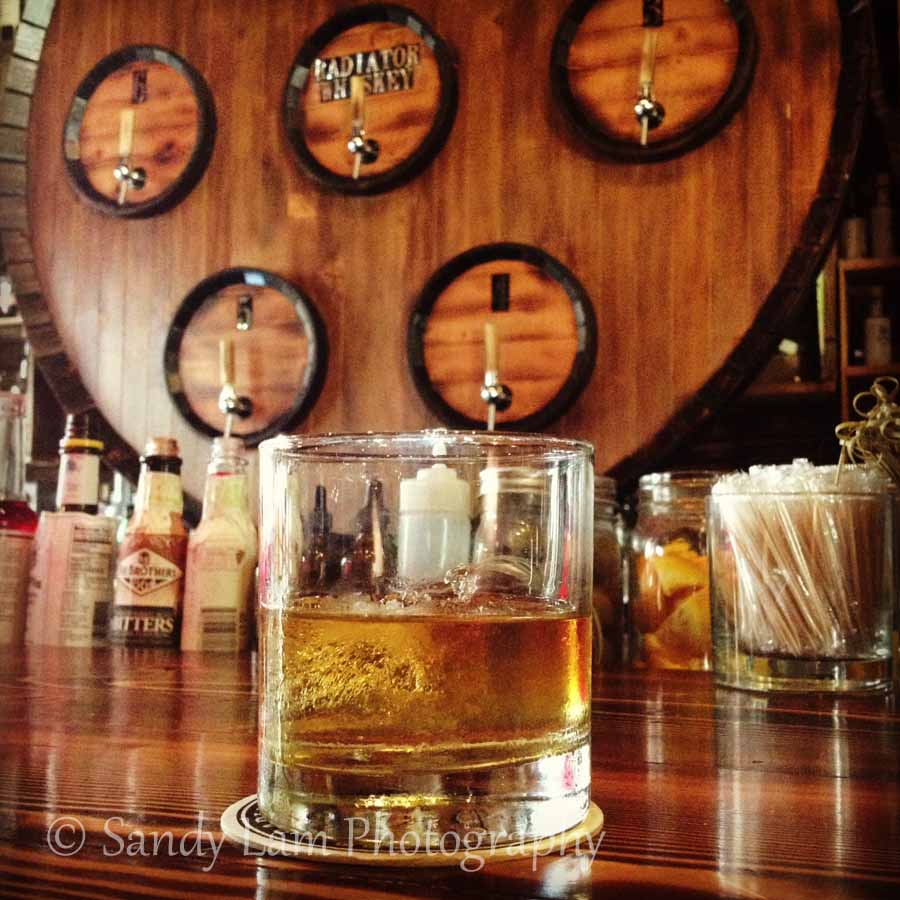 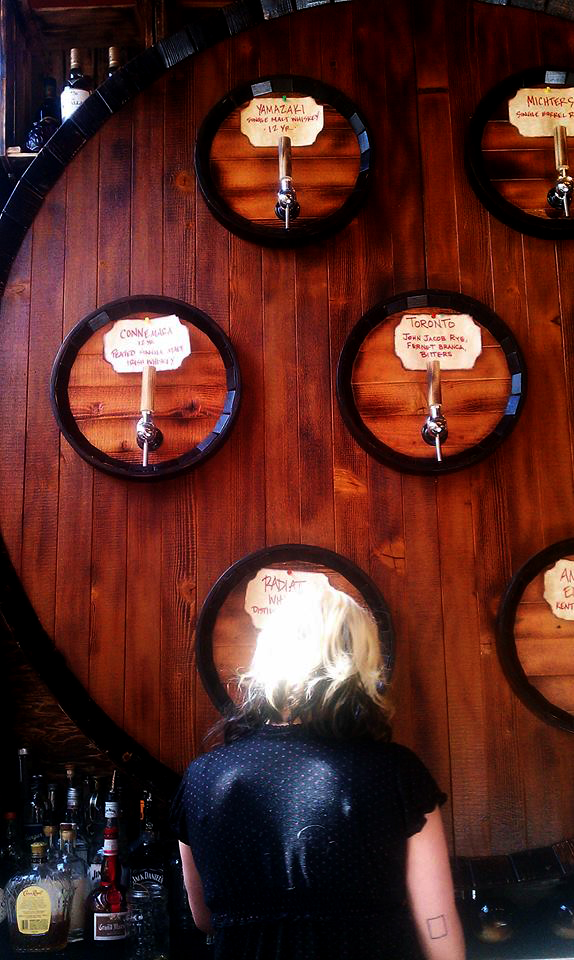 The moment you step into the bar, you stand in awe of the 10 foot (I’m just guessing) barrel frame behind the bar, that features seven rotating whiskeys. The custom built frame along with the handcrafted leg chair beer tap handles, are just some of the beautiful charms to this place. 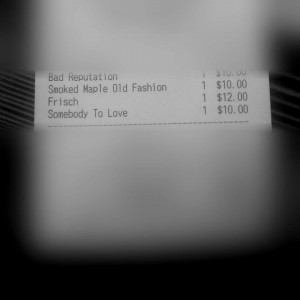 This is how I met Sara, one of Radiator’s awesome bartenders, one of the many reasons that kept me coming back to Radiator for weeks on end this summer.  Trust me, this woman knows her cocktails. I don’t order cocktails anywhere else (especially whiskey ones), but from her. She blends the flavors perfectly without masking the flavor of whiskey. One of her well known drinks is her Bourbon Margarita (and yes…it’s just as good as it sounds). She knows her stuff, and she’s not a snob. If I was ever to be a bartender, I hope I could be half as cool as she is.

Sara has introduce me to some fabulous new whiskeys…I don’t think I’m exaggerating if I were to say there are about 100 different bottles behind the bar. And because of her, I was able to name my first drink ever (yes I know…my friends were the first to point out this was the first sign of alcoholism…naming drinks at my favorite bar).

How Somebody to Love was inspired: Sara was busy crafting specialty cocktails for a Knob Creek dinner, so I told her if she wanted to try something different, I would buy it. Turns out it was the perfect summer whiskey cocktail. Containing their in-house smoked rye, rhubarb shrub, (something else I know I am missing that’s crucial), and and an orange rind served over ice, Sara asked me to help her name is after my approval. She names all of her drinks after song titles and picked Queen as an artist. Naturally, my favorite Queen song is “Someday to Love”…and that is how it came to be.

So fabulous whiskeys and great service? What else could Radiator offer? Oh wait…FOOD. Over the past few months I’ve been able to sample some wonderful dishes, but what I’m really looking forward to is the BEAST FEAST. I’m not even going to explain to you what it is…but I’m there Nov. 14 so you should look forward to next blog entry about my experience. 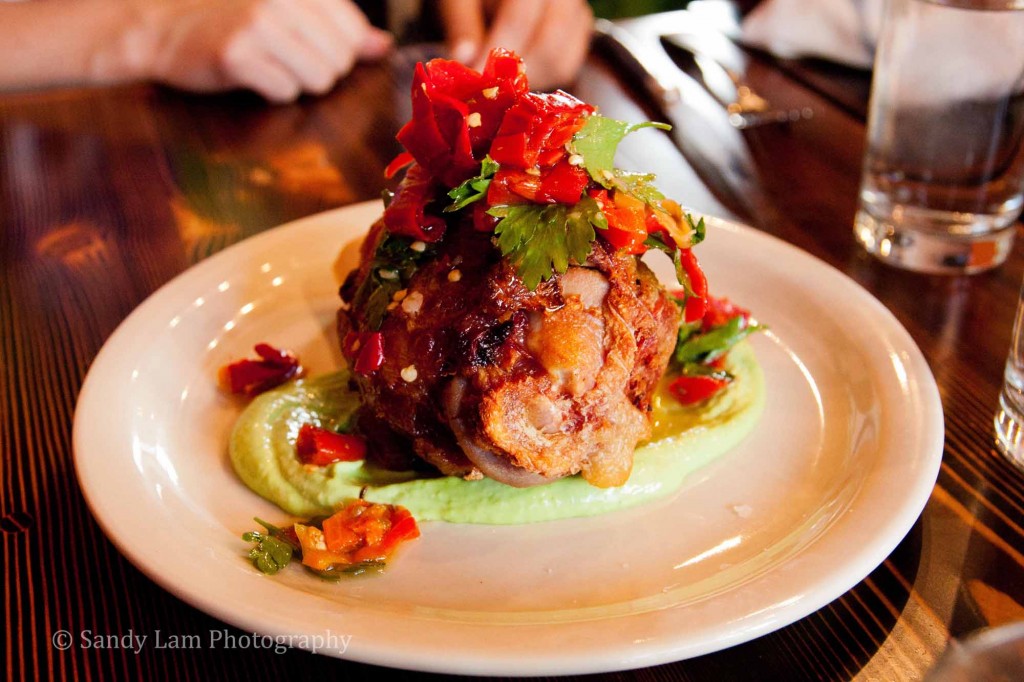 The menu rotates depending on whats in season, but there are some staple items you can find. One of my earliest visits to Radiator involved having plain bourbon (sorry I’ve already forgotten which one it was) and the Butterscotch custard with bourbon whip cream sprinkled with graham cracker crumbles ($8). I’m not much of a butterscotch fan, but this thing was perfect. The custard was at the perfect consistency. I savored every sweet bite and never felt happier indulging in life’s simple pleasures. Naturally, it didn’t surprise me when I heard it was created by the same pastry chef Brittani, from across the hall (she’s that delightfully sweet lady that makes the heavenly bread pudding I specifically go to Matt’s for). Did I mention Radiator has the best popcorn EVER? Seriously. It’s made with real butter. And it’s free!! One night, I got this fancy idea in my head to add some of the popcorn to my custard. I know it sounds a little crazy at first, but if you’re a salty sweet fan, this is the dessert for you! I’m drooling now just thinking about it.

Can’t decide between whiskey or something sweet? Don’t worry about it, you can get a shot of whiskey and two GIANT chocolate chip cookies for $8! Which is a pretty sweet deal sondering their whiskeys range from $8 to $12 or more on average. Aiden demonstrates this below. 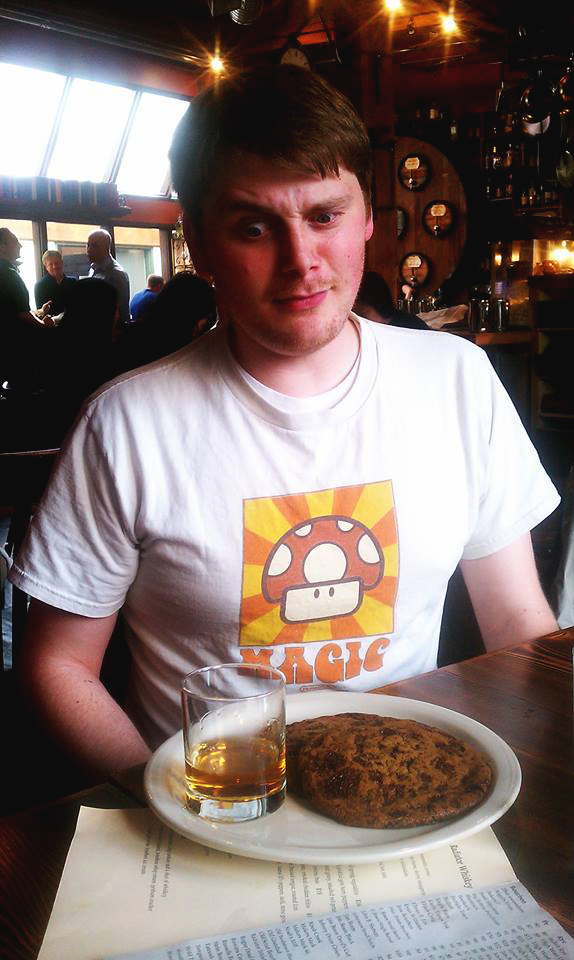 There’s meat, meat, and then more meat. An impressive selection from roasted pork shanks, lamb neck sloppy joe, corn flake crusted chicken livers, and of course the ever impressive Pig Head. The smoked Pig Head feeds 2-3 people and is exactly what is sounds like. I haven’t been able to order the dish myself, since so few are brave enough to try it with me and you have to call ahead to reserve your head…but you can expect to eat the cheeks, snout, and everything in between. I’m looking forward to getting a sampling of it at the BEAST FEAST (yes I do feel it is necessary to capitalize BEAST FEAST every time it’s mentioned…I think because when I read it in my head I imagine The Hulk saying it). 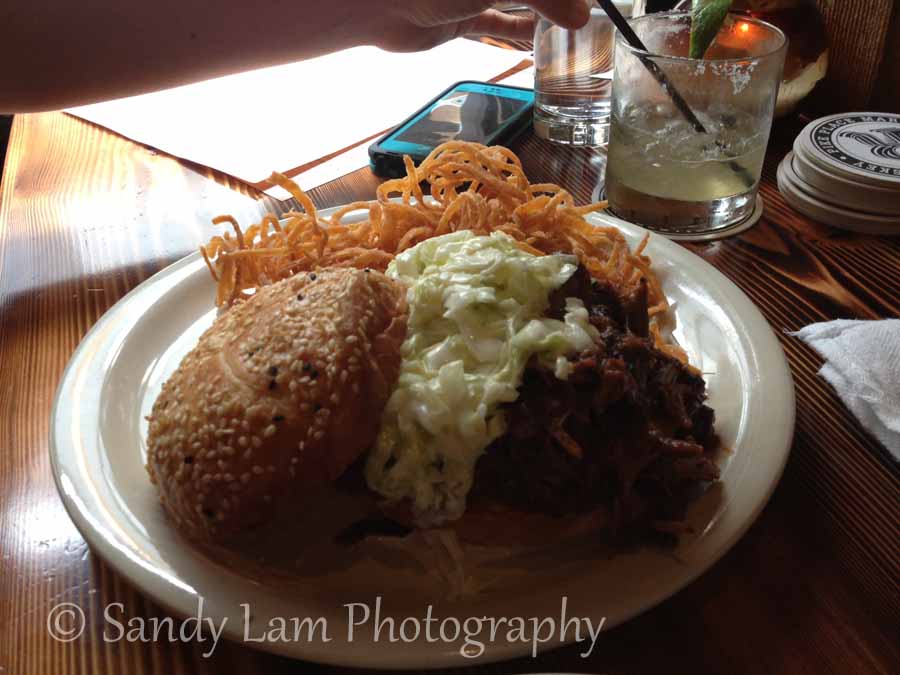 The side dishes and appetizers are equally as tantalizing as the entrees and desserts. You can’t go wrong with tots, gravy and a fried egg ($8)! 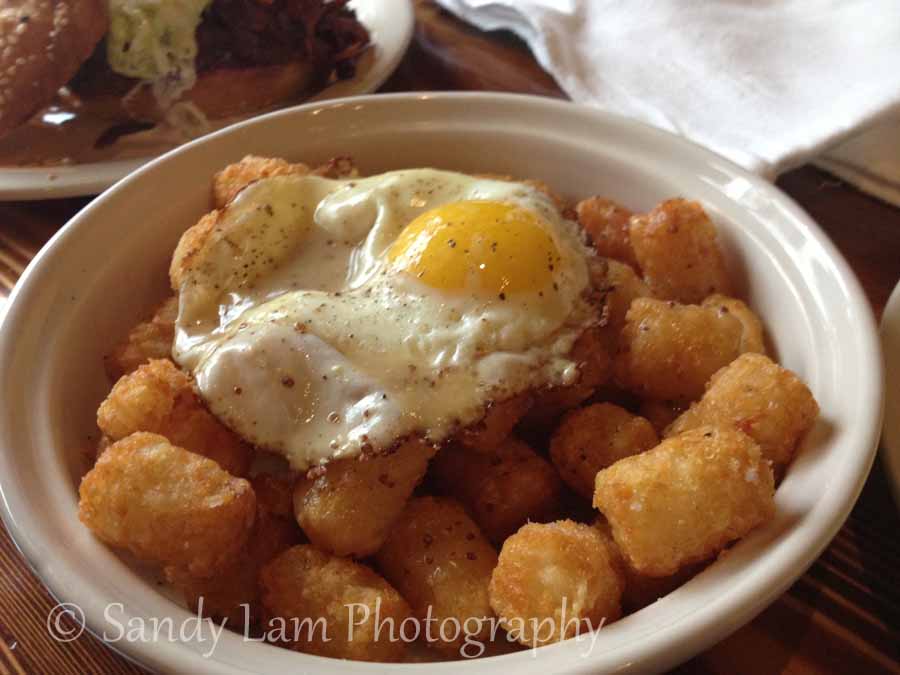 Maple glazed bacon with a poached egg top with caviar ($10). 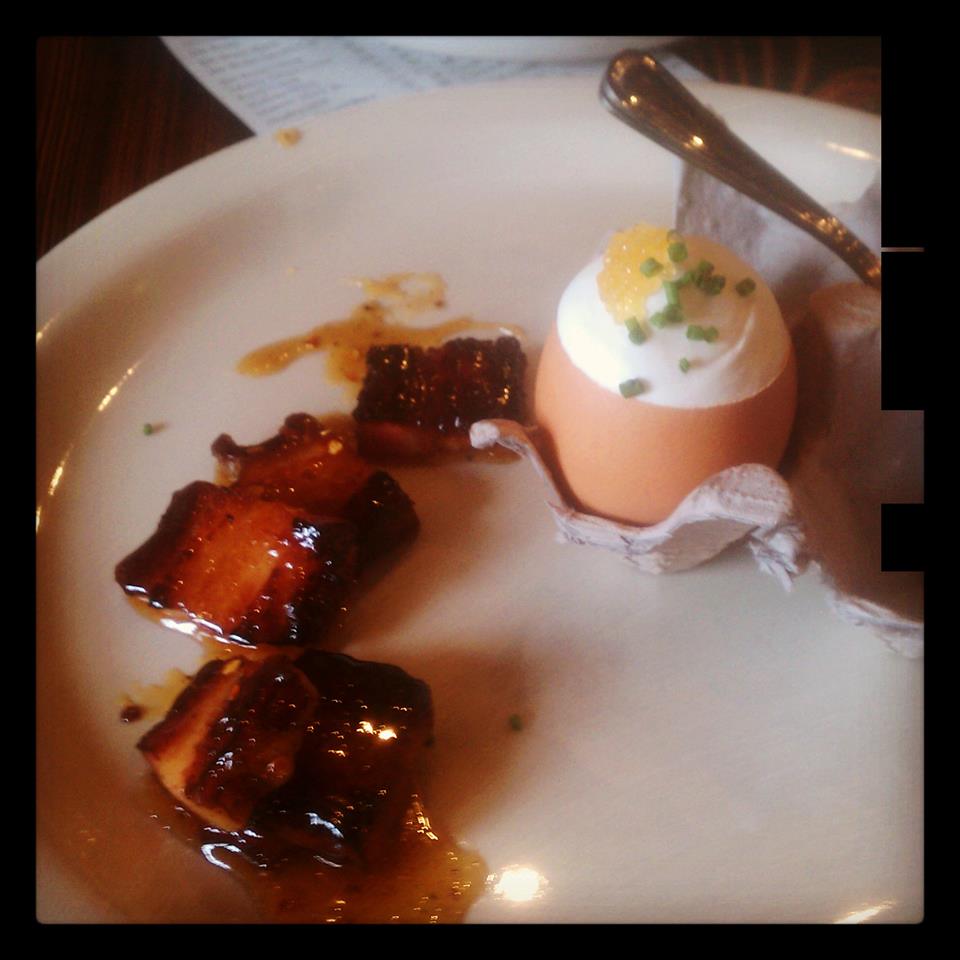 And don’t fret vegetarians…there’s even something for you…how about a summer squash salad topped with fried almonds and dabble of lemon labne? 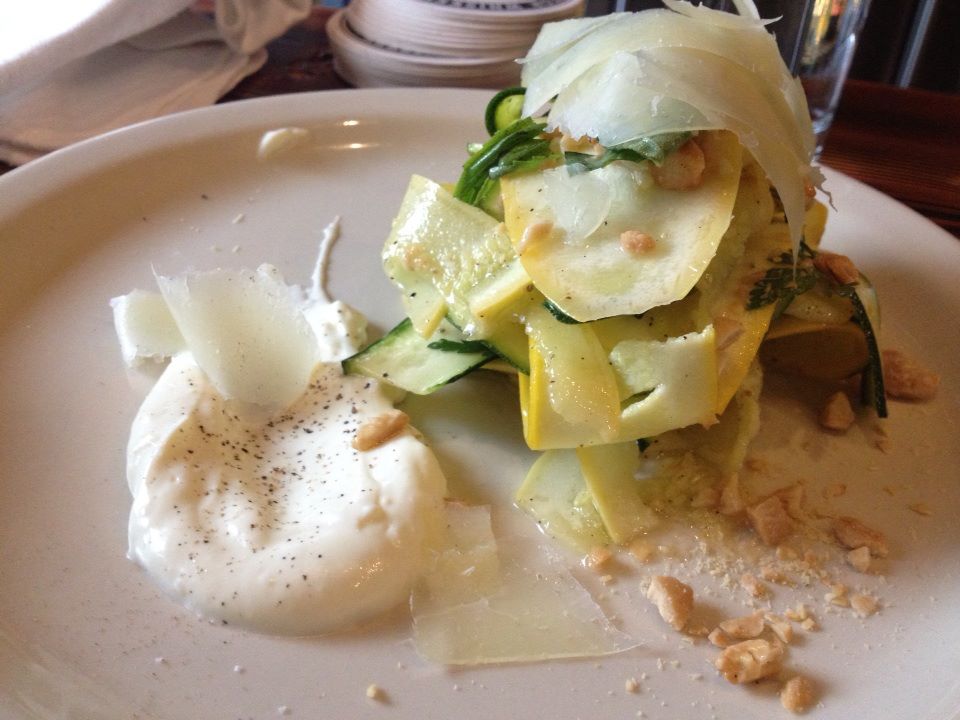 I tried to remember to bring my camera a few days, but you’ll just have to make due with some of these phone photos. 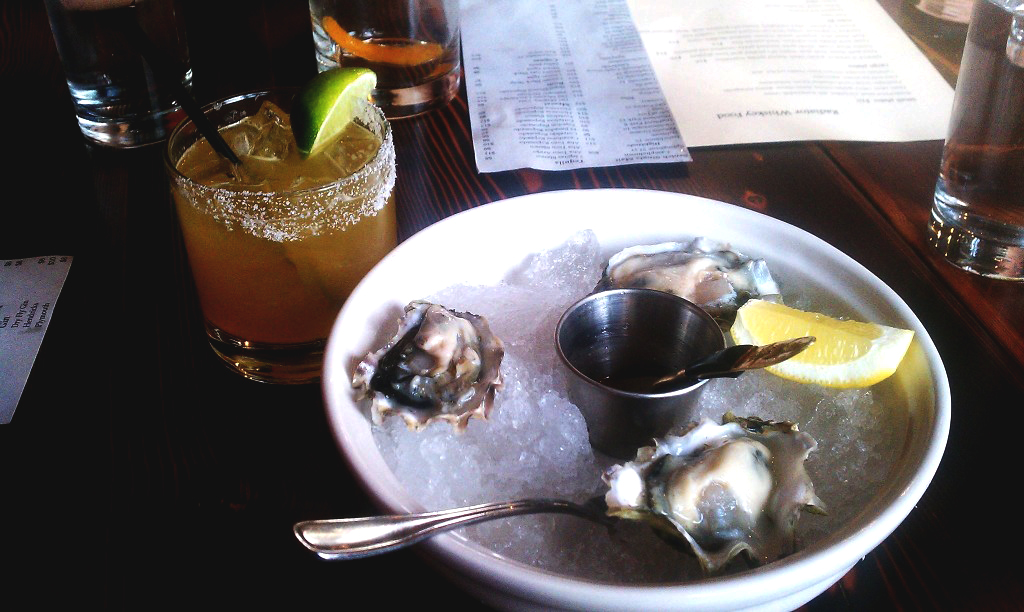 Shucked oysters from the market and a bourbon margarita

Whiskey lovers who have friends that don’t drink whiskey (it’s ok, just means more for us), don’t fret! You can still bring them here. Some great local craft beers are rotated on tap ($6/$5 during happy hour), and even Rainier tall boys ($4). There’s wine, vodka, gin, rum, tequila, etc as well (but I don’t bother with that). Sorry…I’m usually too busy enjoying my whiskey to bother taking pictures of the other drinks. 🙂 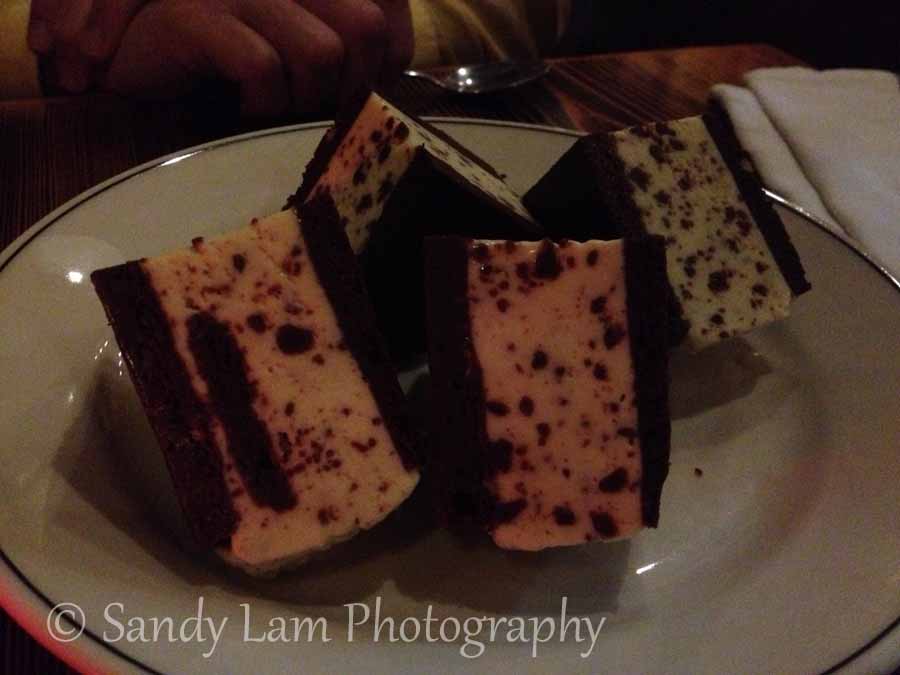 Ice cream sandwiches! (sorry this is truly a terrible photo)

More often than not a line starts forming before Radiator opens on the weekends, and even on the weekdays, I’ve found the bar to be full by 4:30 or 5. Which said a lot this summer considering the beautiful weather we had and Radiator does not offer an outdoor patio. Give the house whiskey a shot (moonshine from 2bar distillery aged in-house).

As I go through these photos now I realize how much time I’ve really spent at this establishment. It might have been a worthwhile investment for me to join their flask club. But…being as I am still unemployed, I can’t quite bring myself to fork over the membership. I’ve vowed the day I get a job, I’m heading down and placing my dues for the club. For $500, you get one free drink a week for a year, in a flask hidden in the cut outs of old books in their library, plus members only dinners. SIGH. I’m looking forward to the day I join in…but for now, I’ll just keep dropping by happy hours and introducing friends to this awesome place. (EDIT 12/2013: I made the cut and now a flask club member! YEAH)

*If anyone is interested in trying to BEAST FEAST with me, the next opening is Nov. 14. $300 feeds 12 very hungry people (Tyler says more like 15) with a Whole Pig Head, Whole Pig Shoulder, Porchetta, Heirloom Tomatoes, Watermelon, Corn on the Cob, Crispy Pig Ears, Braised Pig Tongue and whatever else Tyler and Charlie wants to throw in there! Let me know because I’m trying to gather a group together! I’ll consider it a pre-Thanksgiving warm-up.