So after I heard copper river salmon was going for cheap (I read it was $6.99 at QFC), I really wanted to cook some up of my own. Right when that thought popped into my head, my friend Zachary told me he and his buddy were going to grill up some copper river salmon the next night. So what did I do? Invited myself along. Mostly because it would be an excuse to try to cook this delicious fish and I always love cooking with other people.

I looked up a few recipies and some marinades sounded pretty tasty, but I wanted to keep the marinade simple since the fish is already so flavorful. I tend to go for the sweeter salmon marinades, so I settled on this random recipe I found:

Mix marinade. Place the salmon, meat side down, in the marinade and let sit for 30 minutes.

On a preheated grill, medium heat, cook the salmon meat side down for five minutes. (What you’re trying for is a seared top.)

Flip over and continue cooking until the inside is done to your liking. 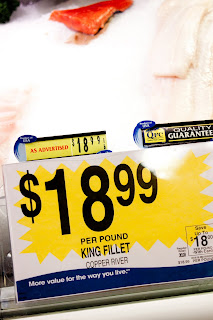 So off to QFC we went, turns out it was the Sockeye Copper River Salmon that was $6.99 a pound. Well I wanted the King, which was a bit more…but we were splitting it with quite a few people so we just went with it and chose some simple cheap sides. 4.75 pounds and $90 later we had a fish. 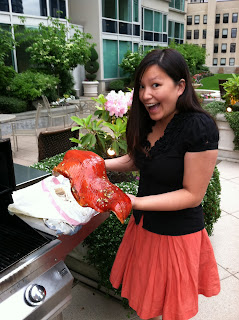 The marinade was quick and easy to prepare. After 30 minutes I was ready to grill! We thought about slicing the fish up but we thought it would just be awesome to be able to grill the whole fish. However, once I got to the grill, I realized probably cutting the fish up would’ve been a good idea for grilling purposes. I wanted to sear the top, but I was afraid the fish would start to fall apart when I wanted to flip it. I’m not much of a griller (that’s what men are for – but for some reason of the four fellas there, only Zach was helping me man the grill and he knew just about as much as I did). So I took the safe route and just cooked it skin side down. Screwing up a $90 fish for four guys I’ve never cooked for before sounded scary. 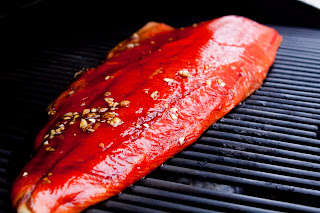 So off we went! The salmon was taking a while to cook (I don’t think the grill was hot enough), but we thought slow cooking it would be a better choice than overcooking it. 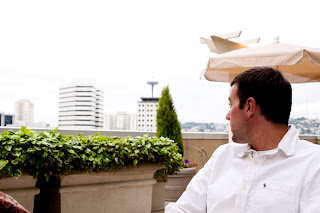 Should’ve tried searing it but oh well. Enjoying the view of being surrounded by skyscrapers and the Space Needle was pretty fun – even if it was a typical late summer blustery June evening. The salmon was definitely cooked thoroughly…and while I prefer it just slightly cooked on the inside…both Zach and I wanted to make sure that we didn’t serve completely raw salmon. Anywho – it was good enough for the guys and I thought it was just ok. Well – it was good. I’m just not sure if it was $20/lb good. But then again, I’m not a chef so maybe I should learn how to cook first. 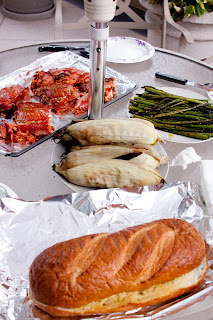 It was still a great experience and I’m looking forward to trying another recipe for this. 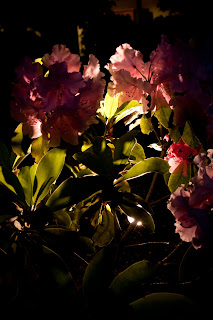