Lunch at Matt’s in the Market!

Dinner was so fabulous I had to come for lunch. Jenn and I are might start making this a monthly treat…although there are quite a few other places we would like to try. So after a crazy stressful work week, I was definitely looking forward to a Friday off. And what better way to start your Friday than with stuffing yourself silly at Matt’s?

I am a huge mimosa fan…I find it pretty difficult to turn down a mimosa no matter what time of day. It was how I started every “morning” in New Orleans and the thought of sweet fruity bubbles always gets me excited. We sat at the bar and chatted with the bartender a bit and said they served two kinds of mimosas (an orange one and one with cranberry apple juice). Being that we felt you could get an orange mimosa anywhere we went for the latter. It was not as bubbly as I’m used to but yummy just the same. 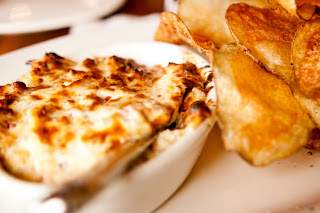 We started with the chips and dip…basically homemade potato chips and a dip that is so delicious and creamy, it makes you want to not think about what is in it. The bartender told us anyway. Something along the lines of cream cheese, bacon, scallions, sour cream, parmesean, grana cheese (never heard of it but it was tasty in it!). But yeah fat city. 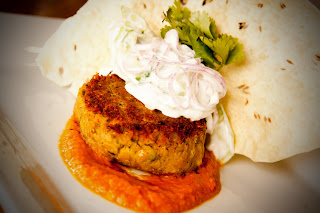 Jenn ordered the Ragda Potato-grabonzo bean cakes, roasted egglant puree, papdum and cucumber yogurt. In non fancy terms: pan-friend falafels. The cakes had a really strong curry flavor to them. Personally I wasn’t a huge fan of the strong flavor with the super soft texture. It reminded me of a reduced curry paste. However, Jenn loved it!

I ordered the Lamb Burger. It was topped with goat cheese, bacon, herb aioli, onion jam on brioche served with a garbanzo-sultana salad. The burger was great but not exceptional. However I think the shining item was the salad. It was light and fresh with a sweet vinegar mint taste. It almost reminded me of a very sweet less fishy vietnamese fish sauce but not as smelly. The fresh mint was a great touch and smelled great. I think that is what reminded me of the vietnamese thing. 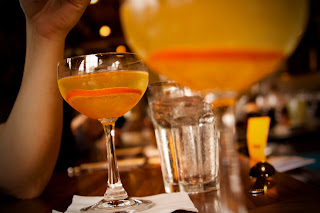 At this point we ordered our second mimosa, this time we went for the “regular” orange one. Except this orange mimosa was nothing less than spectacular. Incredibly unique in taste and served with a slice of orange confit that was simmered in simple syrup for hours and hours. It was so tender you could just eat the rind. It was great. 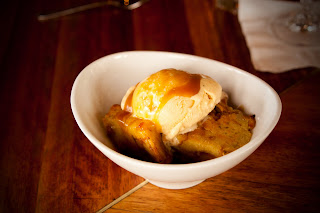 And even after all that, I of course had to top it all off with the bread pudding. That bread pudding is seriously just the definition of “Food-gasm”. Every bite is so incredible and I wanted to savor it but then I didn’t want the salted caramel ice cream to melt!

As we were eating I noticed there was a large percentage of people that ordered the cobb salad. I wish I had known they were going to used deviled eggs because I would’ve probably got that! The special that day was beef tounge tacos which also looked heavenly…but once again – a great time at Matt’s. The food was quite reasonably priced for fine dining lunch (Average $11-$14 an entree) so I highly recommend it to anyone looking for a nicer longer lunch. Like those things all those people in the private sector get to do for free. (ok – not ranting about working in public service) I’ll need to take a break from this place for now though because there are so many other places to try!

Coming up next: My first copper river salmon bbq experience.