Recently, a new acquaintance of mine celebrated his 25th birthday. We kicked off the celebration with a pre-season Sounders game which was nothing less than crazy spectacular fun (even though we lost)! The next day I was trying to figure out what I wanted to do for the evening and I decided I wanted to bake a cake and surprise my new friend Andy with it.

The reason why I got so excited is because I have a bit of a history with making fantastic cakes (with the help of some fantastic friends)…so the best ones made with love turn out the greatest. I decided to share these cakes with you because they really are quite fun. Ever seen Ace of Cakes? Well these cakes are QUITE at that level, but they are ALL edible and made with lots of love. 🙂 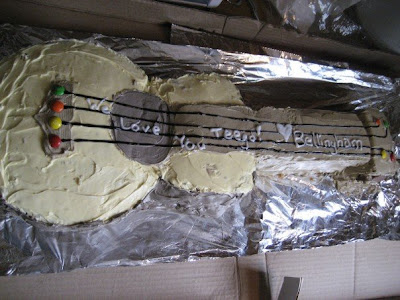 The first of these cakes was created for my friend Teego. My friend Maddy and I put together this guitar shaped cake and frosted using eight 9-inch pans of funfetti cake and lots and lots of frosting (we layed the cake out over an unfolded pizza box line with foil). We even used Hershey Kiss’s as the “tuning pegs” for the guitar. Teego was moving away from our beloved Bellingham crew so we wanted to wish him well on his journey. It took quite a while to get the frost colors right but we did it! 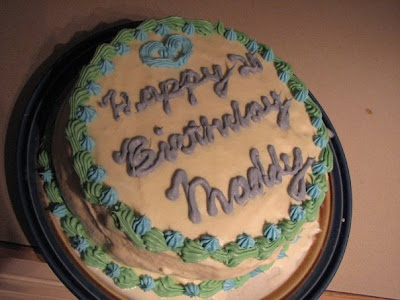 The next cake is my first home made ice cream cake. Taking some of the knowledge I have after working at Baskin Robbins (my first job in high school), I decided to attempt to make this ice cream cake for Maddy for her birthday. I scooped and packed enough ice cream into a 9-inch pan inched with parchment paper and froze it. Then I baked a single 9 inch cake. After letting it cool and even freezing it for a bit, I put it together with the ice cream after unwrapping the parchment paper. I melted some vanilla ice cream and put it back into the freeze just so it would be thick enough to mold and spread around the cake. In case you ever wondered, that is pretty much what is on those Baskin Robbin’s cake. It’s called “deco-cake” but it’s pretty much just melted vanilla ice cream. At least that’s what it tastes like to me. So after I frosted the cake and froze it again, it was ready for some decorating. Since I didn’t have an industrial awesome freezer, this didn’t turn out totally right, but it was a great first attempt. 🙂 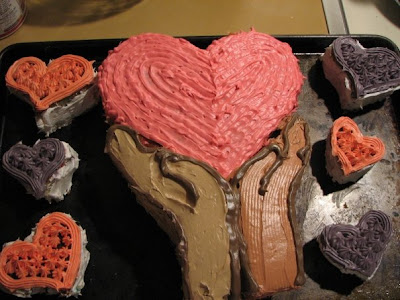 Pretty soon it was Maddy’s turn to move away from Bellingham, and for one of my classes I decided to bring Maddy to “Show and Tell” for “Friendship Day”. Part of my interpersonal communications class was to bring a friend who has made a significant impact on your life, share your interpersonal communication style and what you’ve learned and give them a gift. Most of these gifts ended up being inside jokes for most people…mine..was a pineapple. Maddy knew exactly what that meant and immediately started bawling her eyes out. It was sad and hilariously funny at the same time. But any way, for Friendship day, which was also a potluck, we contributed this Friendship Cake for the class to munch on. Too bad no one ate it because they thought it was too pretty! 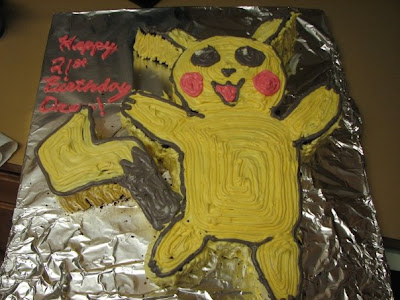 After Maddy moved away I took a long break from making cakes…but the need soon nagged at me. When Drew’s 21st birthday came around, I decided to make him a special cake. I was especially motivated after I especially failed making a cake for his then roommate Andrew. Andrew is a singer and I wanted to make him a cake in the shape of a musical signature surrounded by notes…but failed. I ended up buying him pie to make up for the loss…but he must have found a place to forgive me at some point because we ended up dating later on and made this beautiful Pikachu cake for Drew. Drew and Andrew were (I’m not sure if they still are) avid Super Smash Brother players. These guys could kick some serious ass at this game. Smashing buttons doesn’t work here. But any who – Andrew and I made this cake for Drew in recognition of his smash skills. 🙂 This cake took up a whole cutting board that we took out of the kitchen and wrapped in foil. 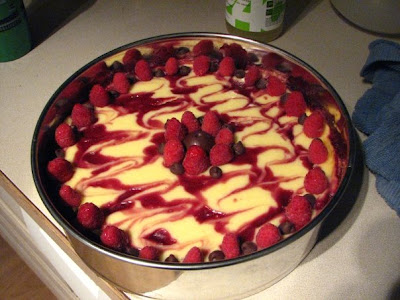 I also attempted my first cheesecake later that summer. Now, I am not a cheesecake fan – I find them too rich for my taste, but this recipe I found…MMMM….so delectable. I doubled the cookie crust amount and it cake out incredible. I highly recommend this White Chocolate Raspberry Cheesecake to anyone. This was my first attempt and has since then won me 2nd place in a bake off! (Which should’ve been 1st place…but 1st place went to the cake that had a WSDOT logo on it…if I had remembered it was for a work bake-off, I would’ve swirled the raspberry syrup into a DOT logo and won!) 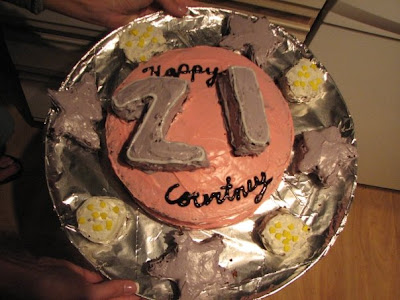 While this isn’t my best cake, it was still made with love for a special co-worker of mine at the time. I’m not sure what to call it but Courtney’s cake!

So this brings us to the current cake. This one comes with a disclaimer because it’s not my best work and not everyone “gets it”. I do also have to say that I am not a fan of what this cake represents. In fact – I can’t stand the game. It’s a long story. But any way – Andy and his brother James LOVE beer pong. So…I decided to make them a beer pong cake (which seemed fitting since they were having a beer pong tournament to celebrate their two birthdays. It didn’t really turn out how I envisioned…but….it worked for being an impromptu cake. 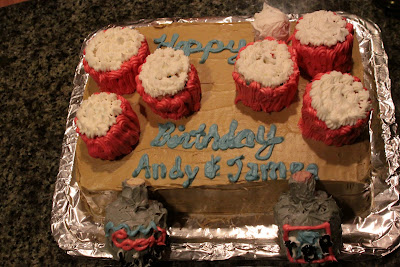 I think the best part was the little mini Coors Light and PBR bottles I tried to create. The were cut off muffins with wine corks stuck in them to give them a neck. haha. Even the ping pong ball was edible! The “cups” were just muffins with the tops cut off and addition cake on top to give it sort of a cup shape…but everything sort of ended up being stout and miniature…plus my frosting handwriting was wayyyy off that day. Not sure what happened. I think the frosting was too soft. 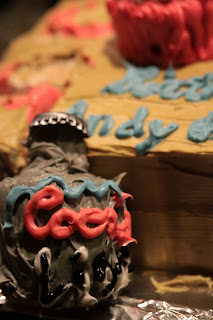 Either way – these cakes were too much fun to make. The key trick is to just let the cakes cool long enough before you start cutting and frosting them! I hope this inspires you to make some fantastic cakes for your friends!