This week was quite successful in my opinion, besides starting the new year off with a disappointing meal at Claim Jumper. I guess we could start with that so we can end on a happy note.

After a great day snowshoeing to start off the new year, my friends and I were famished. So of course we chose the closest restaurant we knew would serve us ginormous proportions. I haven’t been to Claim Jumper in about four years, but I remembered loving their insane and ridiculous proportions. I was pretty excited for what I ordered – it sounded amazing and I had something similar before at Famous Dave’s. It was a “Giant Stuffed Idaho Potato” (Charbroiled or blackened chicken, fresh squash, broccoli & carrots with melted cheddar & jack cheese baked and served with homemade alfredo sauce – $11.95). I was stoked because the price was pretty low for Claim Jumper and it sounded amazing. Plus according to their caloric menu, it only weighed in at less than 1200 calories! (The last time I checked something on a menu was a Cajun Chicken Pasta from Cheesecake factory and it was definitely 2950 calories!) 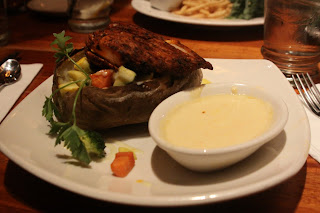 Eventually the food came. And I was very very sadly disappointed. First of all – this was NOT a giant potato. If you want a giant potato – go to Famous Dave’s! The most incredible stuffed baked potato I’ve ever had. Great BBQ too. Any way – the chicken was very dry, the vegetables were bland and what seemed to be barely steamed. I think the only saving grace was alfredo sauce that might’ve had some cheese in it. I was pretty saddened by this experience. I remember the potato cakes being my favorite thing on the menu but I didn’t order any this time since my whole dish was a potato. Our service was good, the atmosphere was just as I remembered it. Busy, semi low lighting, lots and lots of people. Our server was polite and punctual, checking in on us at just the right times. Definitely trying to work the up sale on us, but did so in a nice way. Any way – that’s all I have to say about that. But if you want a giant stuffed baked potato, go to Famous Dave’s. Too bad there isn’t one in Seattle. I need to do some more discovering.

Pike Place…how you never disappoint. I love being able to hop onto a bus down the street from my house and pop out just above Pike Place. Fresh spanikopita, smoked salmon pate piroshki, bbq pork hom bow…mmm….I bought some unique pasta from Pappardelle’s Pasta to try with a secret sauce recipe I stole from a guy I seeing. The sauce is a an incredibly rich cream sauce with garlic, fresh basil, sundried tomatoes, and spinach. Usually made with bow tie pasta, but I wanted to see what it would be like with Pappardelle’s Garlic Basil Fettichini. Mmmmmmm garlic and basil pasta…. 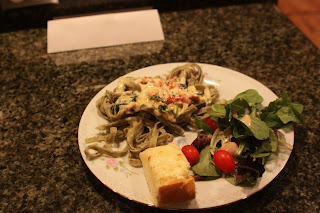 I decided to make the pasta as a welcome home dinner for Meghan…and it turned out great because she pitched in on some ingredients so we could have a well balanced meal. I made Heather’s cheese bread from heaven (garlic butter with warm cream cheese spread on french bread, topped with shredded mozzarella and broiled. Meghan made a spring salad with tomatoes. I was going to make some other veggie side dish but got too lazy. Although the fettuccine was dried, it cooked quickly compared to other dried pasta you get in the store. The sauce turned out great (being that I was basically just guessing because I never made it myself). The meal was fantastic, the only problem was that the fettuccine was surprisingly heavy. Fettuccine normally is filling, but this was filling on a whole other level. It was dense and had just enough of hint of flavor. I think since the sauce was already heavy and thick to begin with, the pasta was a bit much. I loved the garlic basil fettuccine, but think it would be much tastier in something that was more veggie loaded tossed with a light lemony sauce. Oh well – noted for next time…. 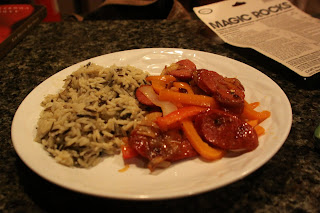 The quick meal of the week: Louisiana hot links sauteed with onions and bell peppers served with some wild rice. 20 minutes later – delish. It’s pretty much prepared how it sounds! 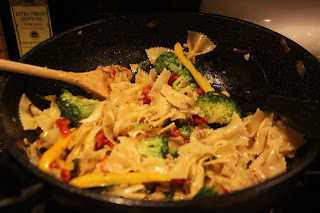 I am a huge fan of pasta primavera…if I was vegetarian, I would just eat any pasta primavera for the rest of my life. And hummus. I love hummus. I’ve tried several pasta primaveras over the past year and tried to create one of my own. This week – I got pretty close…even without the summer vegetables. Can’t wait till they’re in season again and I can get them at the farmer’s market!