Holiday Fun – On my own and with my mom! Well it’s definitely that time of the year…I start to build my winter coat (somehow it came on early this year once I finished my half marathon and stopped major physical activity everyday).

I’ve been slacking in writing mostly because my camera has been out of commission so you’ll have to forgive me for the not so great quality pictures in this post. But here we go! I recently hosted my very first very own holiday party. This year has been particularly special to me, as I have moved out on my own for the very first time, and not dating anyone (which put a damper when I needed help with things like Christmas lights or carrying the 5 bags of groceries into my house). Most of my guy friends are either too far away now to hang out with me or unavailable for other reasons. My party was simple and small…although fitting 12 people into my 500 square foot apartment was interesting! But we all had a great time and even had a white elephant exchange. 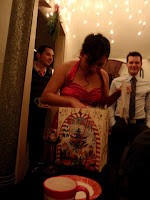 Ironically, almost everyone ended up with a gift that related to their personality. I got an aphrodisiac cookbook called “Intercourses”….which will come in handy SOMEDAY when I have a boyfriend. 🙂 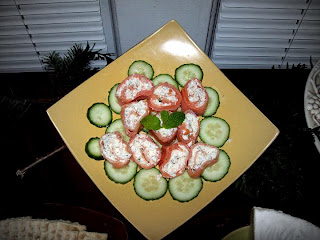 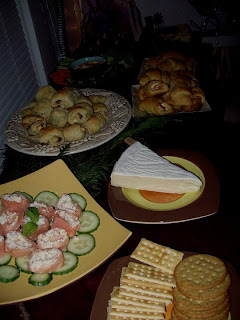 As far as the hor d’oeuvres, I decided to cheat a little. By using different pastry doughs, I created a few different dishes, just with different fillings. Above is smoked salmon wrapped with some whipped cream cheese, dill and thyme. I also made my signature shrimp bites on french bread. I also stuffed some crescent rolls with smoked salmon and cream cheese. There was also some stuffed crescent rolls with sauteed mushrooms, garlic, spinach, and onions. I also cut up some pastry sheets and rolled them with some feta and roasted walnuts. And of course there was a veggie platter with hummus and ranch. My friend made some chocolate cookies with peppermint kisses in the middle. I’m mad I didn’t take a picture but I know one of my friends did…I’ll upload it later when i get my hands on it. I baked some pastry shells and filled them with whip cream, and topped it with blueberries and raspberries and a mint to garnish for dessert as well. Over all these only took me a couple hours to make, and were relatively easy.

Everything but the pastry dough was homemade! Well and minus the hummus and veggies. 🙂 I also made some mulled wine, (not pictured) and it turned out fantastic! I looked at a few recipies and decided to create my own. Some were pretty basic while others were pretty complex. Last year my roomate made the mulled wine so I have no idea what she put in it. But essentially my recipie was as follows:

And all I did was heat up the honey in a big pot so it became less viscous and started adding the wine and seasonings and fruit. I heated it up for about an hour and a half before i served it. It was pretty tasty! Orange zest would make a nice garnish but since I had too many things going on. I had to make sure everyone got their holiday mugs and party favors! 🙂

Overall I thought it was a success. And then I went home and that’s where my mom showed me what real cookin’ is all about. With my help of course. 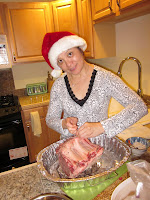 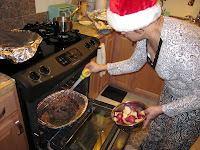 My mom worked on the roast beef and I prepared scalloped potatoes with a bechamel sauce and raisins. 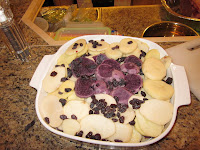 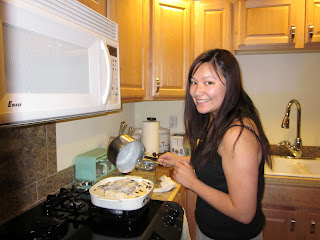 And 3 hours later….we were feasting!! 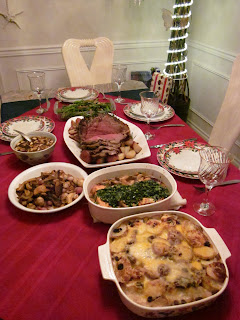 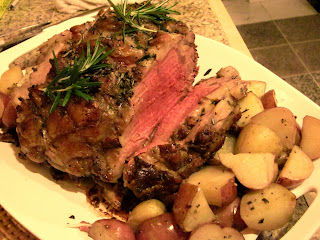 The potatoe medley with rasins and a bechamel sauce. 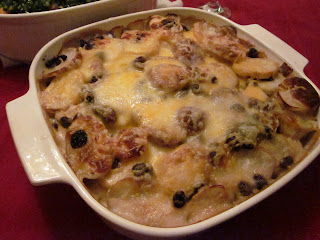 This salmon dish is SOO delish. It combines the best sweet and tart levels…I’m not sure whats in it…we baked the salmon with some teriyaki sauce and then my mom sauteed some asian greens/chives of some sorts and a mushroom sauce and spritzed it with lime juice. I can’t really describe the taste. Except that it is delish. Maybe I’ll write about it sometime. 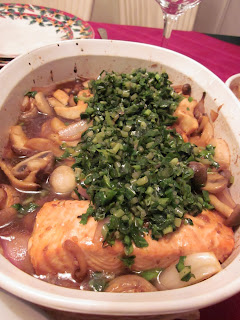 My mom was on a mushroom kick…here’s another side dish with some friendly fungi with mini onions. 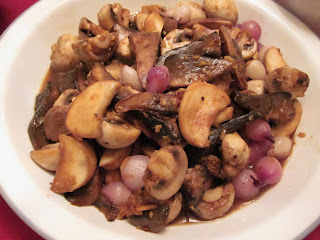 And of course some sauteed garlic green beans/snow peas and almonds. 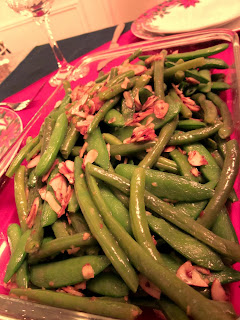 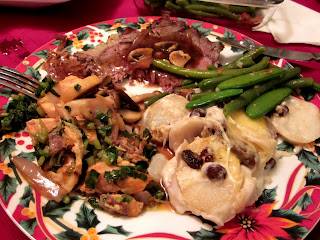