Happy Birthday Dan Bugge! (owner of Matt’s in the Market) I swear I’ll stop rambling about Matt’s in the Market soon… 🙂 but this story just had to be shared. I am just going to go ahead and apologize in advance that there probably is more detail here than you need, but I really like to tell stories. 🙂

So, I recently shared my first blog entry about Matt’s via facebook, and they in turned shared it with all of their fans on facebook. I about peed my pants when I saw that. It was extremely exciting and flattering. Sometimes I feel like I’m writing to no one and I was very honored that Matt’s reposted my entry.

The mysterious person behind their facebook even followed up with me to see what I had for lunch and I shared my lunch entry with them. This time it was not reposted but I definitely wasn’t expecting it to be anyway. I figured at this point they probably think I’m am that crazy fan that won’t leave them alone.

But today, after a long day at work I came home to this:

I wish you could’ve seen my face. My jaw literally dropped and I was thinking, “Seriously?!?!” Again, I thought I would pee my pants with excitement. I couldn’t believe it. I felt extremely honored and humbled to even be invited to such a neat event. Meeting Dan would totally make my day, week, month, etc. I also felt like I was slightly intruding but then I thought well maybe he is a nice person and more like me where I think the more the merrier. I wasn’t sure what the format would be, and while I normally don’t mind wining and dining alone, I wanted to share the experience with someone. Jenn couldn’t make it, but I was really happy that I could bring a good friend of mine, Ashley, to dinner with me. 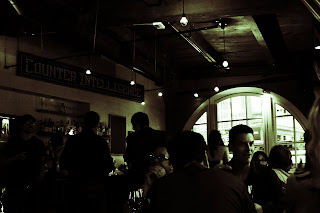 A couple hours later, we were walking upstairs to Matt’s and there was a sign that said “Matt’s in the Market will be closed at 8 p.m. tonight for a private event”. I’m not going to lie, I felt oober cool to be going upstairs anyway because I was invited! Walking in was slightly awkward, since I knew nobody there would know who I was and probably wonder why I was there. Someone greeted us though and when I told them that I was invited he asked me for the “secret password”. Being the awkward person that I am I nervously responded with a “I don’t know…my name? I didn’t know there was a password?” He laughed and said, “There’s no password, just hang on a sec.” And then he showed us to the drinks area and said, “Help yourself to some drinks!”

And we did. The wine was of course fantastic (way better than 2 buck chuck!), although I can’t tell you what I had..something white, and something that looked delish. Ashley tried a few others. Meanwhile we tried to guess which one Dan was…we settled on this one guy because he was talking to everyone there, but I later found out he was Dan’s lawyer! Haha. Eventually the “headchetta” taco bar was ready. We grabbed a table and waited till most people got their food. I just felt like it would be rude of me not to let other people who actually know Dan to go first. While we were waiting, a woman named Chou chi (I am SO SORRY if I completely butchered your name) came to introduce herself to me. She was the face behind the Matt’s facebook person. Well one of them, according to her. I thanked her for inviting me to the dinner and she said “Well I figured you would really enjoy this. And this really was a last minute thing we put together.” She even thanked me for coming! I was like, “No way! Thank YOU for inviting me!” She pointed out Dan to me and urged me to get some tacos. Eventually we got up to get some. And what a beautiful spread it was. I’m pretty sure I could’ve eaten that entire bowl of guacamole. It was so fresh and zesty. Everything looked sooooo good! These photos aren’t the best but I didn’t want to be the creeper with the giant camera so I didn’t really try to get the settings quite right the first time. One day I’ll learn how to use my camera properly. 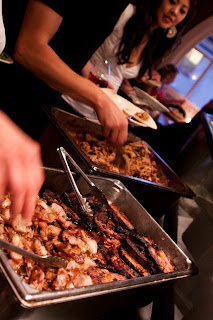 The pork was just beyond incredible. Juicy and tender and every other splendid description. Braised pork shoulder, pork belly cochinta pibil style, and headchetta galore…I think there was some kind of fish..not sure what that was. But the tacos were amaziiiiing. 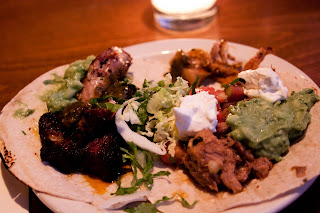 Having tacos looking over Pike Place Market and watching the last bit of the sun go down with the ferries is quite the experience. 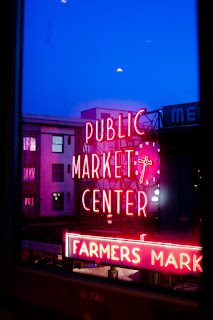 What a beautiful place to have such a great restaurant.

I debated for a while when I should say Happy Birthday to Dan. He was busy with many people and I didn’t really want to interrupt him. Eventually he went to get a glass of wine and no one was around so I walked up to him to say hi. He turned and laughed because he said he was on his way over to say hi to me! So he came by and sat with Ashley and I and we just chit chatted it up. In a nutshell he told us his life story and it was such a great experience. I learned so much about him, if I was still a reporter, it would’ve made a great mini feature article. To me, dinner was GREAT. But what really made my night was the conversation we shared with Dan.

What an incredibly warm-hearted, easy going, and genuine person. Before our conversation I really liked Matt’s and would gladly recommend it to anyone. After our conversation, I LOVE Matt’s. Just knowing the person behind the scenes that genuinely loves his restaurant and more importantly, the people he serves is incredibly touching. And if you haven’t picked up on it, I am a big fan of character, quirks, and passion when it comes to restaurants (or anything in life for that matter). I believe each place should have a story to share and that the experience a diner has should add to their story and character. What’s funny is that prior to meeting Dan, I remembered seeing him running around greeting people at the door and helping his staff both times I had been to the restaurant. I think that itself says something about him. When the owner is working with his staff and on site and able to interact with everyone, I think that makes a major difference. I bet working for him would be a blast! No wonder everyone I’ve interacted with there is so great.

We talked about many things in the short time we spent with him. I felt like we could probably sit there and talk for hours over some great wine. I learned that Dan actually used to work at the fish throwing place just across the way from Matt’s for 10 years before he bought Matt’s. He said he always knew he wanted to own his own bar/restaurant and after having lunch every day at Matt’s, he bought it in 2006. “I felt like having lunch there every day was basically like a down payment.” Was one of my favorite quotes from him. My other favorite part of our conversation was when he talked about how much he loves to be a host and interact with people and be able to share the restaurant with them. The humbleness of his story when he bought Matt’s was really endearing as well. We talked about how he expanded the restaurant and how perfect the location was. The quintessential place for dining in Seattle. I couldn’t agree more. The fantastic food, service, atmosphere followed with being right above Pike Place Market and the view really is a unique experience. I believe he said when he took over and reopened the place, it just so happened to be the same day as his birthday and within a week of when the original Matt opened Matt’s in the Market.

In the end when we parted ways, Dan gave each of us a hug which I was really happy about because I am such a hugging person. I’m definitely one of those people who would be walking around with those “Free Hug” signs. What a stunning experience and great way to celebrate someone’s birthday. I decided that I am definitely going to have to plan on having dinner at Matt’s for one of my birthday events (I celebrate my birthday for a week with a series of events). Sorry Salumi’s! But I’m pretty sure the bread pudding is reason enough for me to come for my birthday…now if it wasn’t so far away….

So thank you Matt’s in the Market and Dan for sharing such a wonderful experience with me! I can’t say enough how much I enjoyed the food and everyone there. I wish I could repay the favor somehow, and I think I thought of a unique gift so I’ll definitely swing by with it sometime. I was still walking on air this morning after telling my coworkers what happened. It was a GREAT way to start off my week!