You all should be very excited. I finally got a smart phone. You know what that means? a large amount of food pictures coming your way. Check it out!

Besides making and eating food, I spend a large amount of time attending music shows. I usually hover around 2-3 shows a week, and when it’s a good week, 3-4. I’ve had the honor of getting to know one of my local favorites, Handful of Luvin’ quite well over the past year, after accidentally discovering them last summer. I showed up to a show to watch Luc and the Lovingtons and ran into my old childhood friend, Pat, who turns out is the bass player for Handful. We just lost touch after high school, which is how things go…but I am so glad we reconnected because he has become a very special part of my life! We share the same love for food and have our “dinner dates” when he’s not too busy being awesome. Basically we take each other out to our favorite local eats. It’s pretty fun! So…through him, I’ve become good friends with the band. I absolutely love them. I’d like to rave about them, but I won’t. You should check them out. Fiddle driven gypsy rock? You know you wanna….

So one day…I took a trip with the boys to a winery on the Olympic Peninsula called Olympic Cellars. It was a private event…but I’m pretty sure the only person who was really enjoying the music was me and the birthday lady. The next day we slowly made our way back to town. We thought we could get back before the next gig (on Mercer Island), but turned out we barely had time to grab food before the next show. We just headed straight there. David, the lead vocals and strummer, who turns out to be pretty health concious, was complaining that they never eat healthy while touring on the road. We joked about hiring me as their touring chef, but after the idea was planted into my head, I wouldn’t let it go. What a perfect way for me to make a mass amount of food for some people that I love.

So the day before their next tour, I spent the afternoon packing/cooking some things I thought would be better than fast food and might keep along the way. It turned out to be pretty fun! 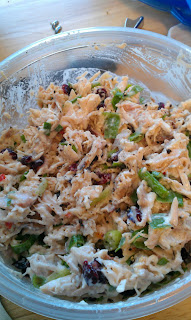 First was the roasted chicken (yes I roasted it) salad. Roasted Chicken, cranberries, green onions, italian dressing, ranch, and freshly ground pepper. Turns out this was the biggest hit. I got some pita bread so they could make sandwiches. Pretty yummy! 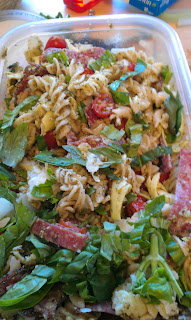 Next was the pesto pasta salad. Corkscrew pasta, peppered salami, artichokes, cherry tomatoes, and fresh basil. This was Pat’s favorite. I made a vegetarian version for him since he couldn’t eat the salami. 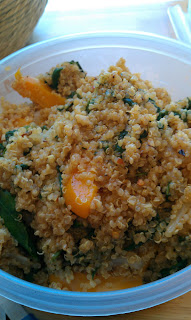 This garlic roasted quinoa salad with onions, bell peppers, and spinach was David’s favorite. He really loved it. I’m not sure how it kept…I think I remember him telling me it might’ve gone bad before they could eat it all. 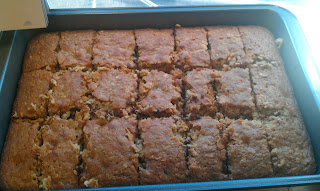 These oatmeal peanut butter chocolate chip bars were meant to provide a healthy snack for the guys. Something that would stick to their ribs a little more than cookies would. I never tried one so I’m not sure how they turned out but when the pan was returned to me, it only had a few left. 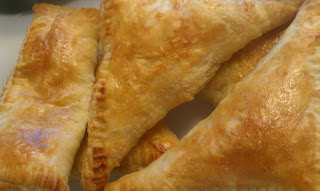 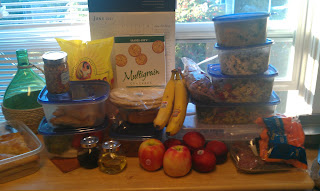 Now when you put all that food together, along with other tasty snacks, you get what you see above. That is what all the above mentioend food looks like together with Caprese Salad, hummus, chips, salsa, nectarines, bananas, apples, cinnamon almonds, and carrots. I asked my lovely friend Jamie if she wanted to make something for the boys as well since food is basically her love language. She made them her amazing yogurt coffee cake (which was probably the biggest hit) and tabouleh salad. Those boys were well feed that week. Well snacked at least. Personally, I would probably get tired of all that food before the week was over, most of them aren’t really too picky. I just enjoy eating hot foods and tend to not eat left overs for more than a day.

The boys loved it, and I had SO much fun making the food. I’ve decided that I will make an effort to try new recipes for future road trip foods. So this will be the first entry as a stay at home tour chef. 🙂