I felt like a disaster my first night in London. I didn’t stand on the right side of the escalator, I fumbled through my coin purse trying to figure out what the difference was between my pounds, euros, and turkish lira, and apparently had to sample nearly ever beer on tap because English beers were all new to me. And please note for future reference, and IPA in London is NOTHING like an IPA back home in the Pacific Northwest. It more or less tasted like a diluted pilsner. I didn’t like what Tim was drinking and ended up settling for some kind of amberish looking beer, but ended going for Guinness for the second round just because it was the only thing that had any relative flavor on tap. And I never get Guinness. For the most part I found lagers to be most popular among the Englishman during my stay, but I personally preferred the ales. At some point in the night I was introduced to Porck Scratchings. Which essentially is Pork Rinds to us Americans. Fatty and full of sodium, but a favorite among englishman on a night out. I didn’t really like them at all, but those Englishman really loves do… 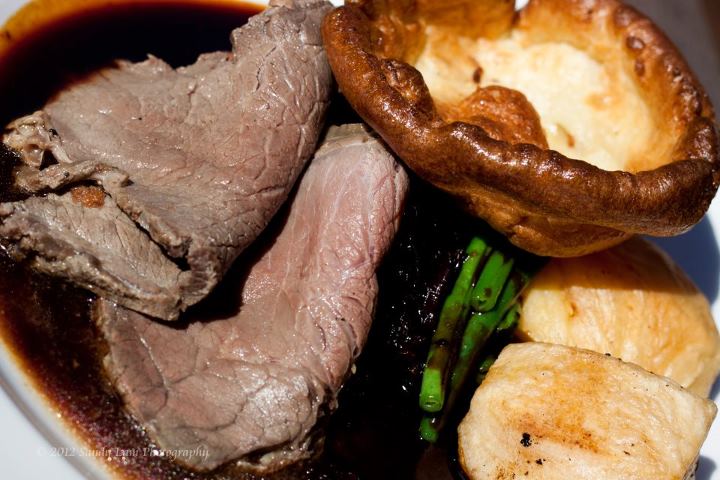 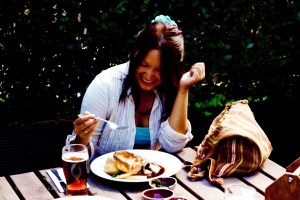 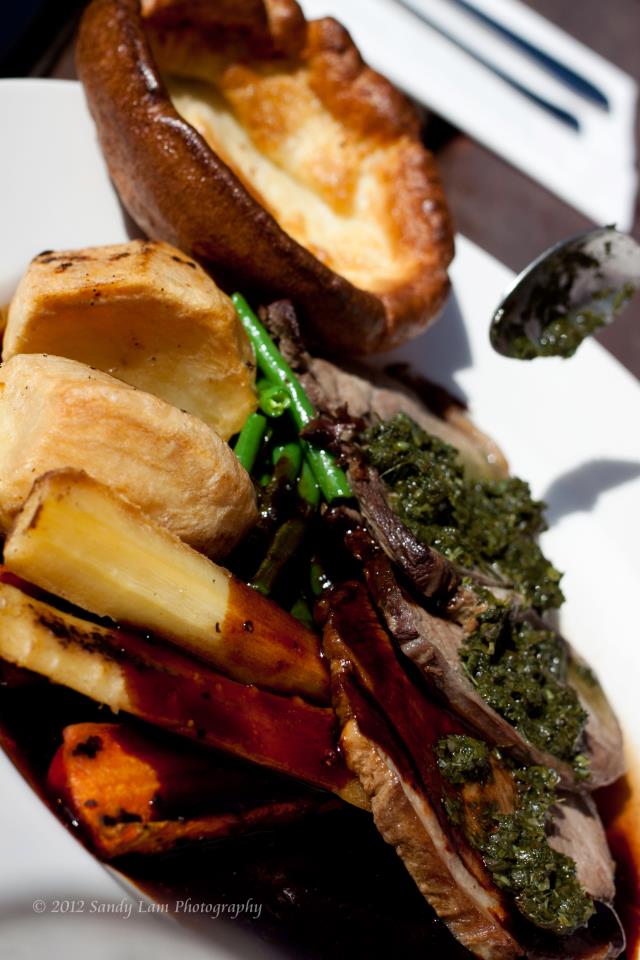 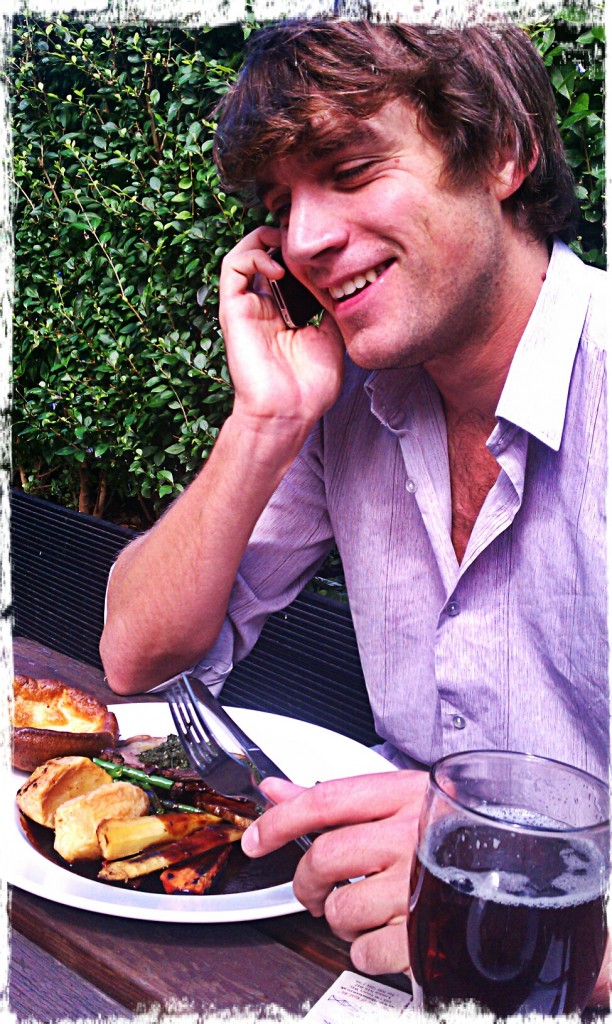 I don’t know what it is about an English Roast, that whenever I tell people I had this meal, I always have to say “A proper sunday roast”. Maybe it was because that’s how Tim described it to me and it stuck with me ever since, but according to Tim, having a proper Sunday roast was a must on my list before I left London. So before we headed over to the Nottinghill Carnival, we walked a little ways over to a place I can’t remember the name of anymore…and sat out on the patio. Beers in hand waiting for a good roast, I sat back to relax this good moment in life.

We had the option of beer or lamb, and normally I would choose lamb, but since the traditional english roast is with beef, I chose beef. TIm got the lamb so we could share. The lamb was much better than the beef, although overall the whole experience I would give it a 7/10. The roasts were good, but not particularly sensational. The Yorkshire pudding was great, and not much of a pudding as I expected. Its like a fluffy pastry. The mint chutney that was used on the lamb was the best thing I had during the meal next to the dessert.

Which brings me to my next item. I sampled two bread puddings while I was in London. One from the Borough Market: 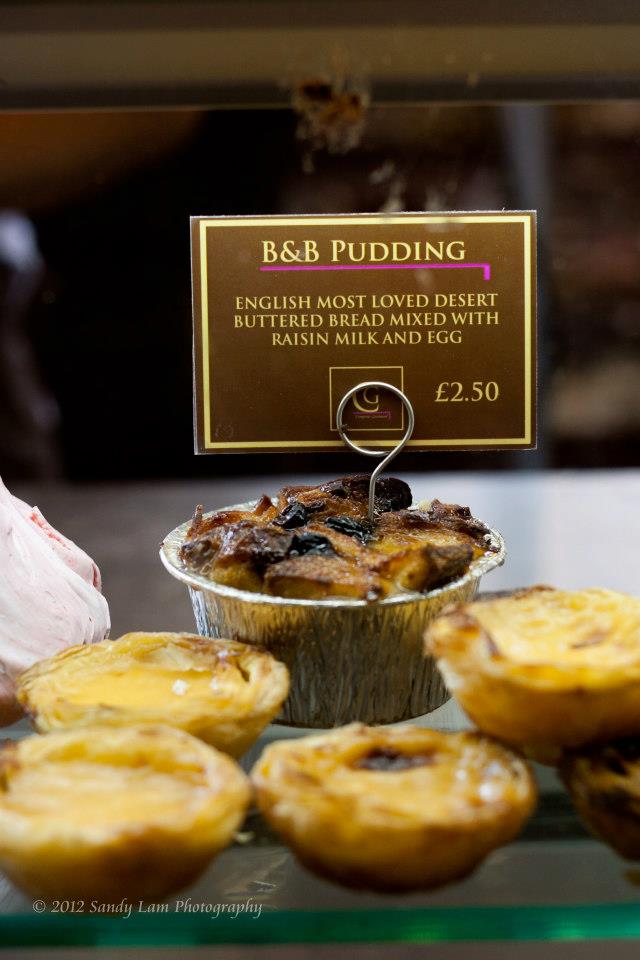 …which was not exactly fresh. I took it home from the market and we reheated it the next day for a late night dessert. It was delicious though! Not too soggy, not too crunchy, and not too sweet. 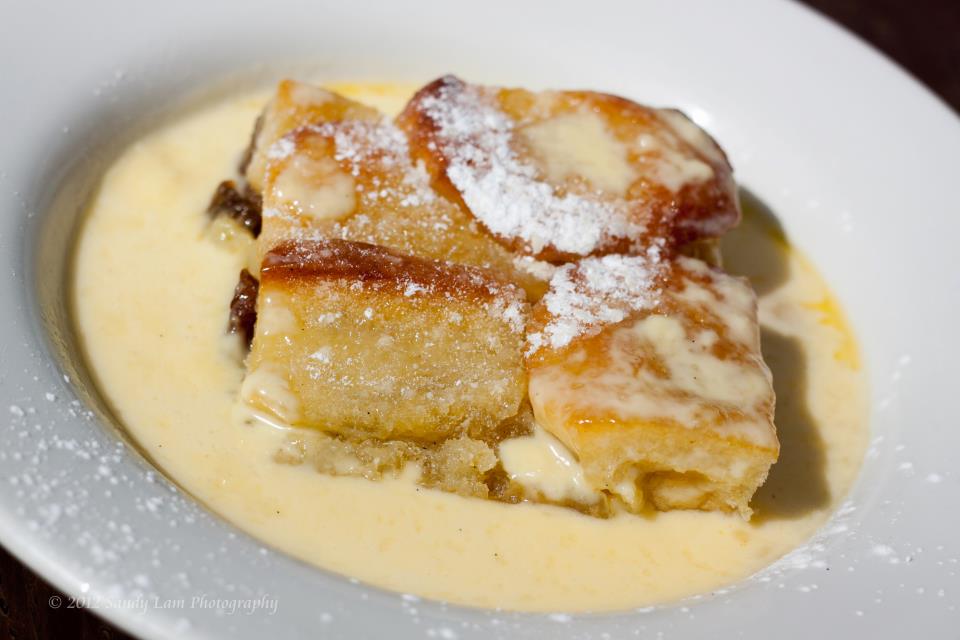 The second bread pudding was from the place where we had our proper Sunday roasts, and this time it was surrounded by a hot custard. To me, custards are normally more of a cold jello pudding consistency. It was delicious, however the custard seemed to overpower the bread pudding so I couldn’t really tell how the bread pudding was. The texture was a little too soggy, but I think it was because of the hot custard that seemed to make it soggy. I think I actually burnt the roof of my mouth on it. Any way, it was warm and comforting and the perfect dessert after our roast. I felt a little slow leaving, but ready to party at the Nottinghill Carnival! 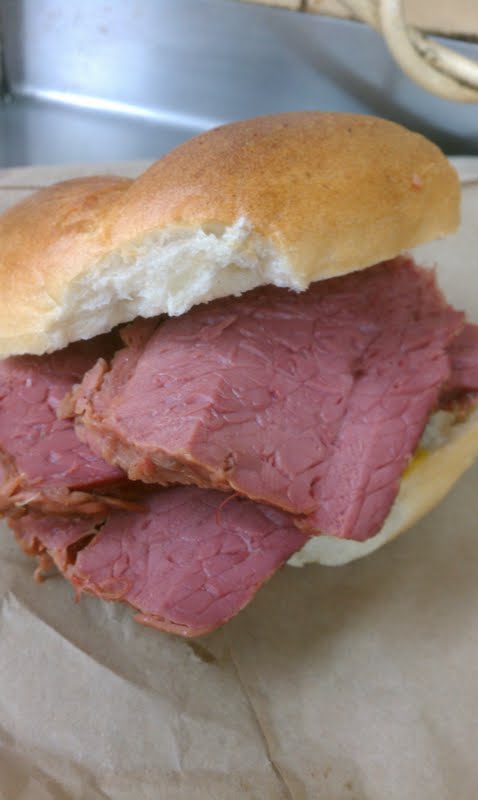 These are TIm’s favorites. After spending a day on Brick Lane, I stopped by one of these shops. Tim claims the best ones were here (the white one, not the yellow one, he said since there was two beigel shops next door to each other and they are literally called the Beigel Shop so there is no definitive name). A long line inside and thankfully not outside as it was pouring rain that day, but the service was fast and efficient. Efficient to the point of rude. An woman working who I can only guess is the manager or owner that could get away with talking to customers the way she does, hollering, “NEXT! Whatdaya want?” As soon as she hollers you order t the next person she doesn’t even look your way again and moves on the next person. I love that kind of thing though, makes me feel like I’m in some kind of authentic hole in the wall type place in New York or something. Tim told me that grabbing one of these was important and more importantly, to get mustard with it. Little did I know that the mustard it came with was basically straight up horseradish. I’m not even sure if it was even horseradish. It was worse than wasabi. I literally felt like the nose hairs inside of me were burning off from the spice of the mustard. It wasn’t exactly a pleasant experience. I’m not sure if I thought the beef was particularly amazing, but it was a perfect snack for a rainy day and the fresh beigels were aaaammmaaazzzzing. 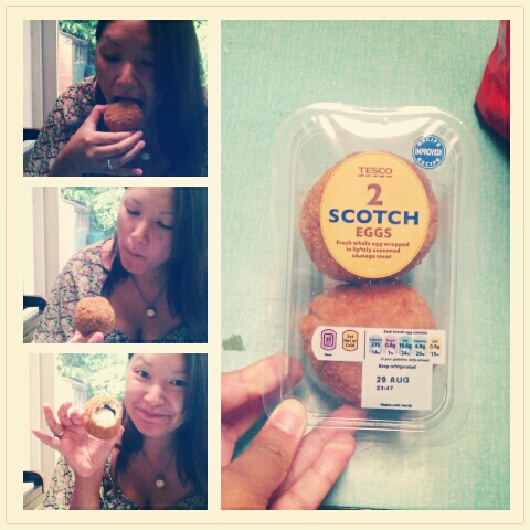 I’m not sure what to equate Tesco to for a store back home. It’s basically like a mix between 7-11 and glorified mini mart. One day I brought Tim candy home from a candy shop (there is a surprising amount of old fashioned candy shops around London) and he brought me a scotch egg. Sweet, I know. I had NO idea what a scotch egg was. By the looks of it, I wasn’t expecting much, but excited to try something new. Tim was excited for me to try it anyway. So here I am trying the scotch egg…Tim insisted on taking pictures of my reaction. I ate it cold, although I think I would’ve preferred it hot. It’s basically a boiled egg wrapped in sausage deep fried or maybe just breaded. It pretty much tastes exactly how it sounds. I don’t think I’ll be eating another one anytime soon, but it was a fun experience. 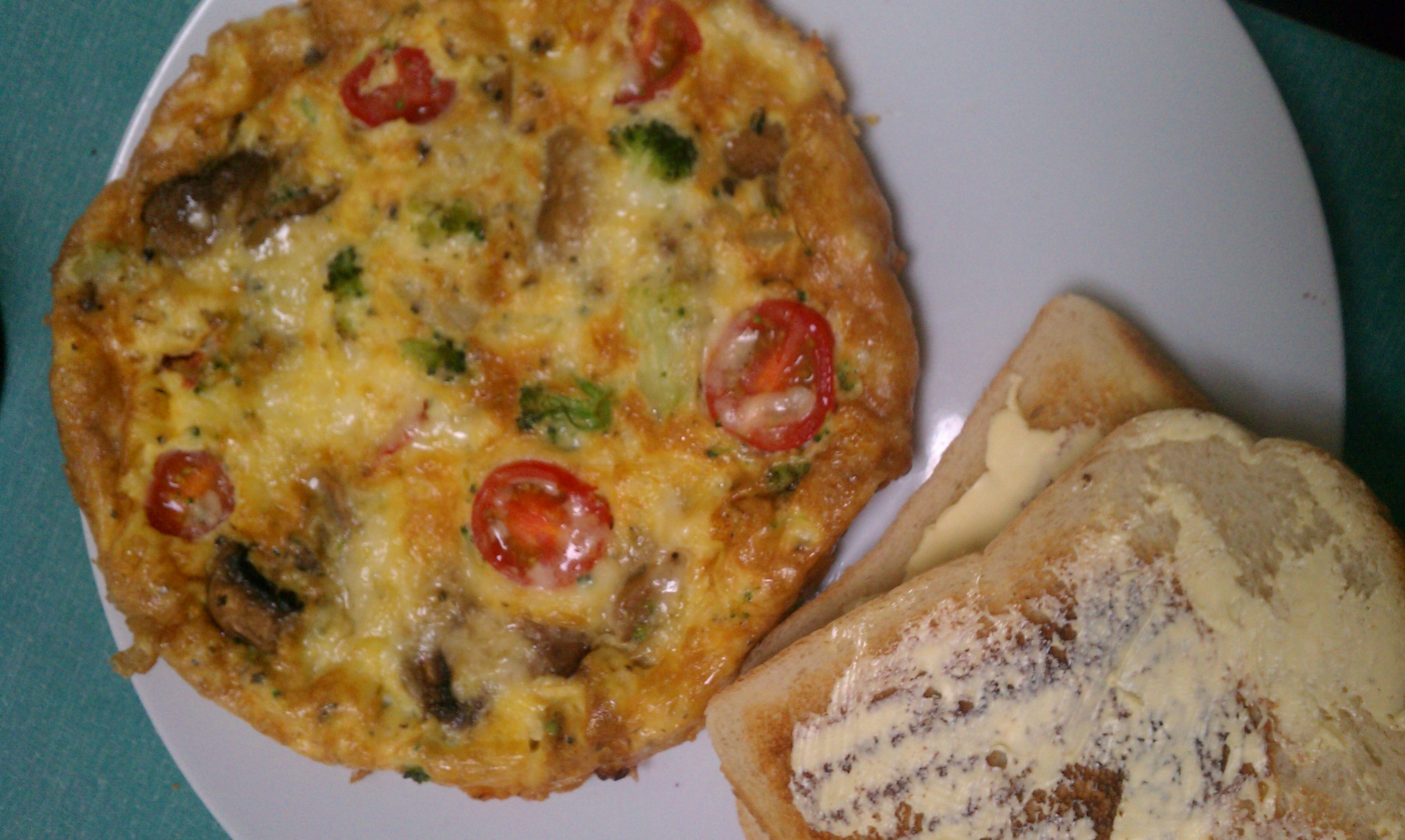 Back in Turkey, I had made Tim some omelettes for breakfast and he told me that he would show me how to make a proper omelet in London. This is the result. It’s basically a scramble that is broiled in the oven at the end to give it a crispy top. Super filling breakfast before a day of exploration! 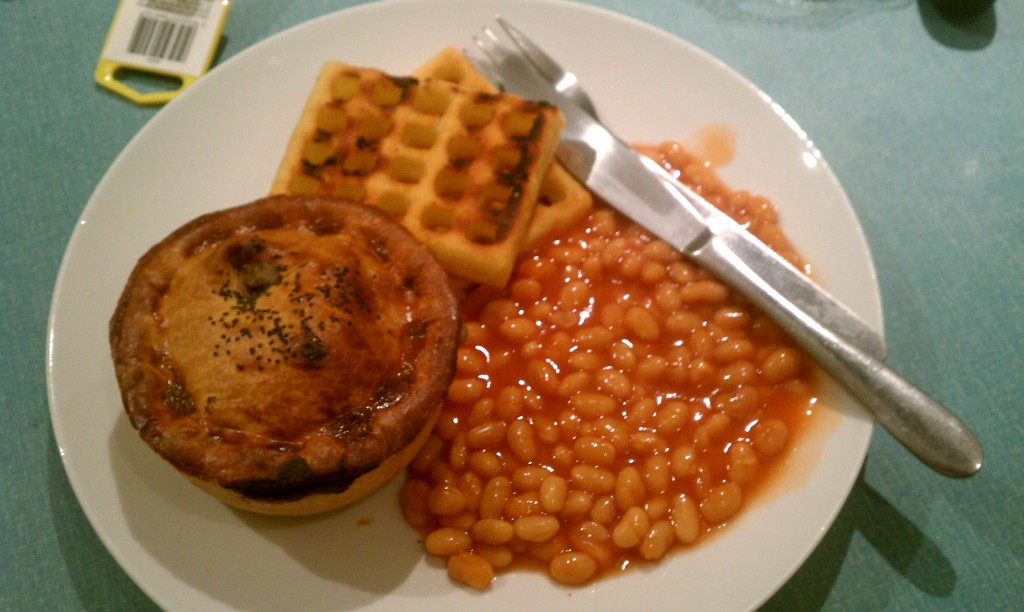 I bought a couple pies from the Borough Market, and Tim wanted to spruce them up with some side dishes. Baked beans (of course, why am I not surprised) and potatoe waffles (aka Waffle Fries to us Americans). My pie was basically filled with a cream of mushroom sauce with roasted chicken. It was REALLY REALLY GOOD. We might have overcooked it when we reheated the pies, the crust was a bit thicker and not as flaky as I had imagined, but still better than most pies back home. I could get really fat living in London with all the pies around!