Dining in the Cinque Terre

Translated ironically to Red Lobster. Luckily the restaurant isn’t as cheezy as The Red Lobster, unfortunately it is entirely way too overpriced. I might as well paid a little more and dined at the coveted Belforte…we ended up at Gambero Rosso by accident. I thought I was sitting down at Trattoria Gianni Franzi, but when we opened up the menus we discovered not only had we sat down at the wrong restaurant, but that it was twice as expensive as we wanted to pay. However…they had just made us a table outside by the harbor so I felt guilty getting up to leave. We just decided to roll with it. 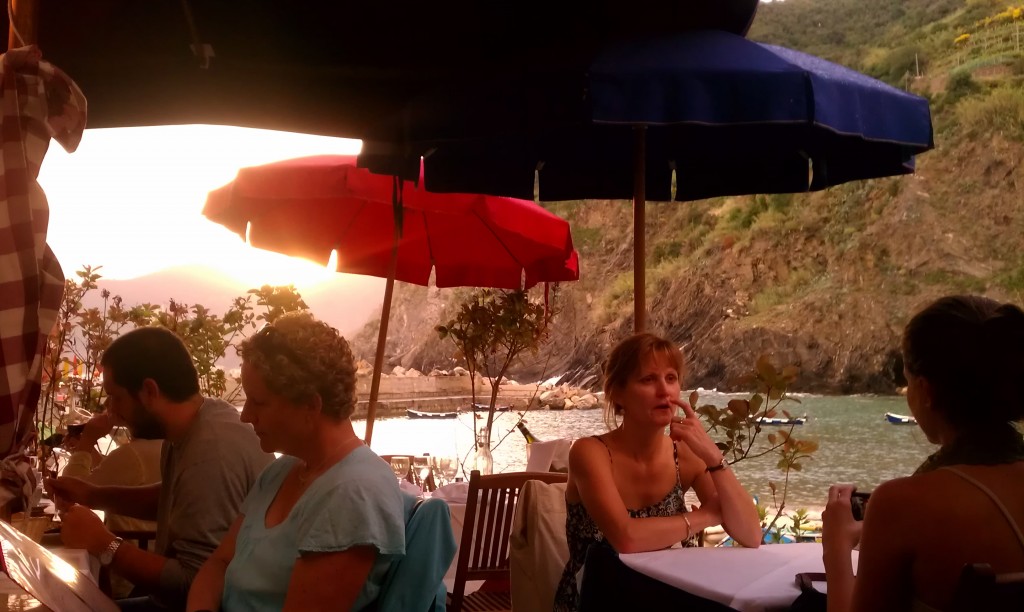 The service was attentive however, I did feel bad for our server who had probably a few too many tables. They were friendly and our server even offered us some of his homemade lemon cello at the end of the night. 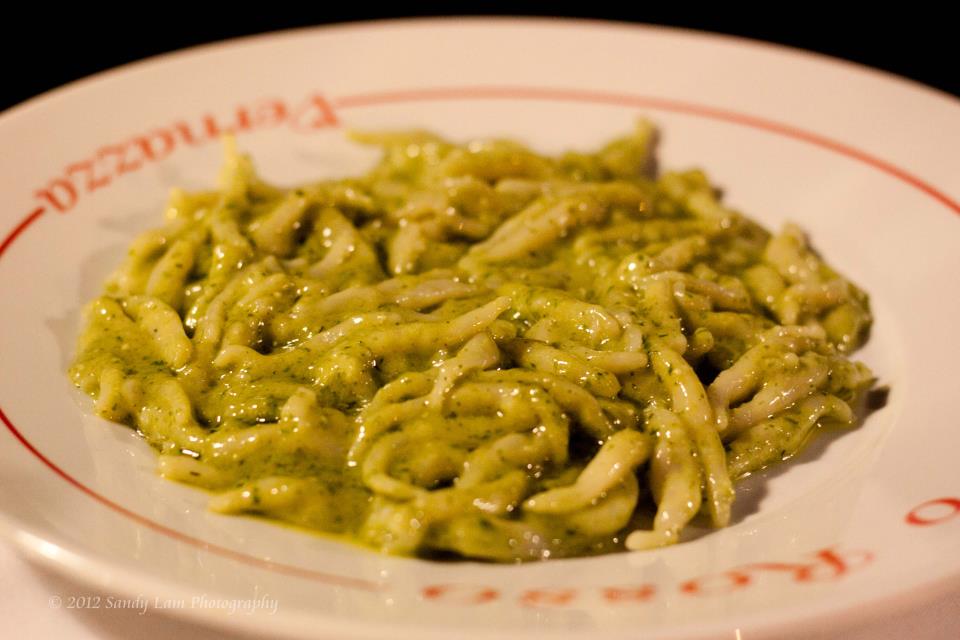 I wish I could say the food was great, but I only found it to be ok. Giovanni had a mixed seafood platter and trofie with pesto (local specialty). While I heard people rave about the pesto in this region, I didn’t feel like it was anything special. In fact, I preferred Valeria’s. It wasn’t bad, it just wasn’t phenomenal. Trofie is a type of pasta that you really can’t order anywhere else but in the Ligurian region. 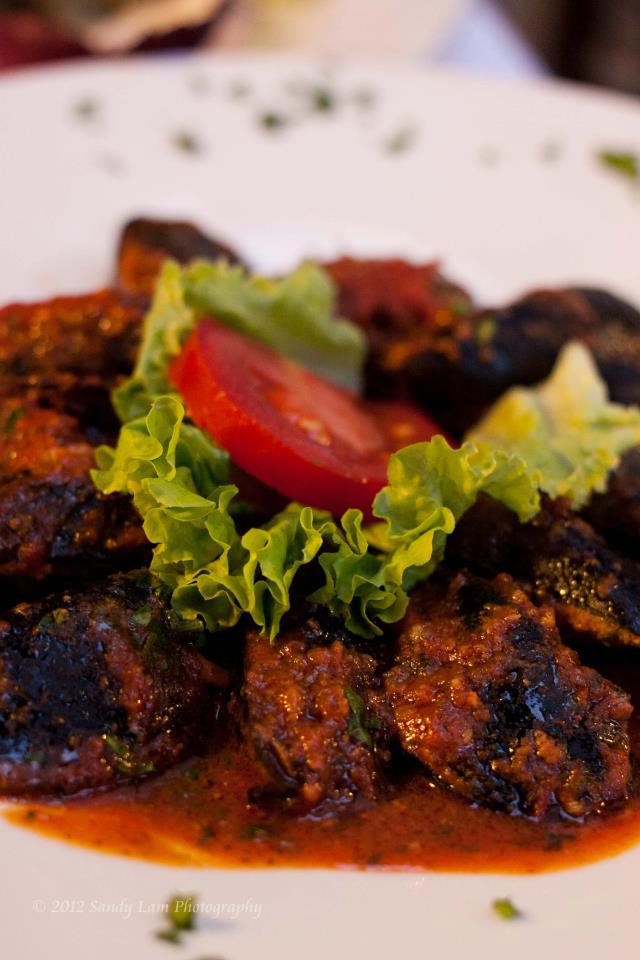 Mussels stuffed with meat and veggies 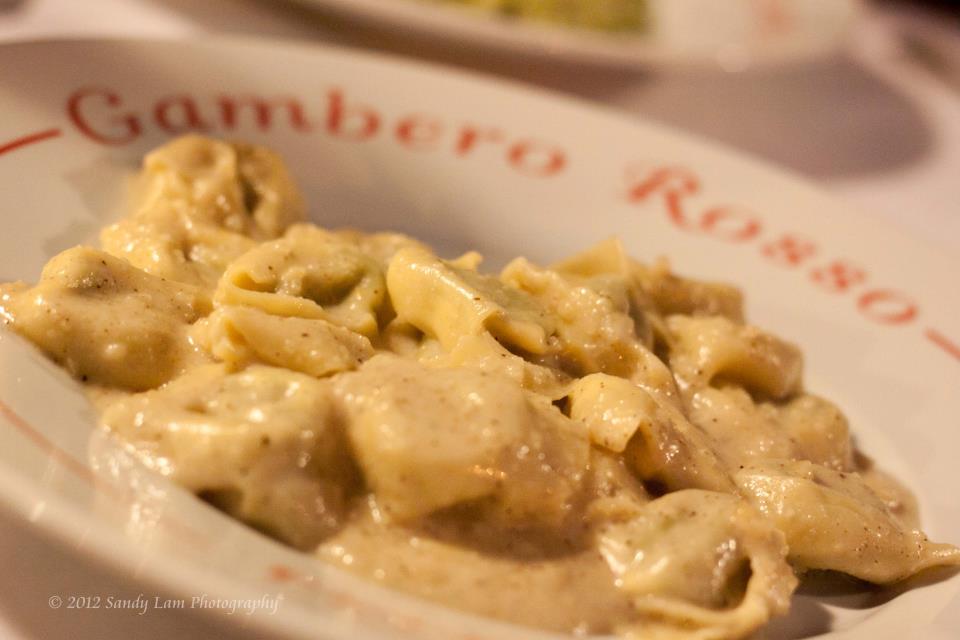 I had stuffed mussels to start. Next to our lemon cello shot happy server, this was the most memorable part of my dining experience. The mussels were stuffed with ground meat (I assume pork) and vegetables and more of a pasty consistency than anything. The flavor was much better than the texture for me, but the tomato sauce it came with was what stood out most to me. Definitely used my bread for some scarpetta! My second dish was tortellini with a nut sauce (also a specialty of the region). It was really REALLY rich. It was almost like tortellini alfredo with peanut butter or something. The sauce was thick and nutty, and definitely tasty. It was just really rich even for me!

All in all, while the location was great, the service genuine, and the food was fine…it was entirely overpriced. I think our entire meal with wine was almost 80 euros.

The best bakery in Vernazza 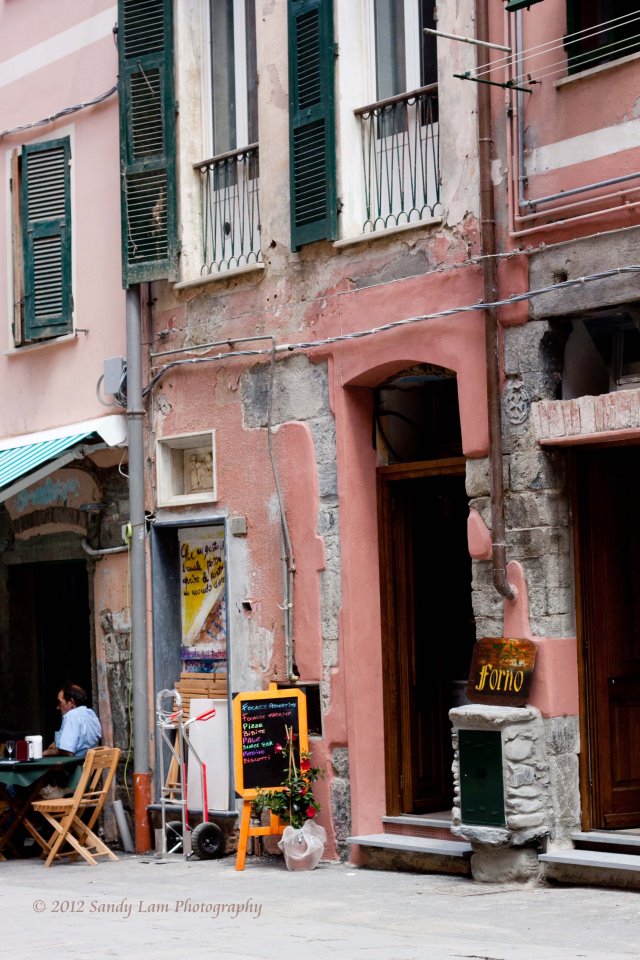 The little bakery next to our B&B

This delightful bakery was my favorite part of Vernazza. The entrance to our B&B was just next door to it so it seemed to be a rather obvious choice when we woke the next morning looking for breakfast. The focaccia there is to die for. I could eat it for dayyyyys. I ate it so quickly both days that I kept forgetting to take photos of it. Each day there is a different variety of pastries but there is always plenty of foaccia for less than 2 euros. I’m not sure what the name of it is, but I think it’s the only bakery in Vernazza and it’s on the main street so you can’t miss it. 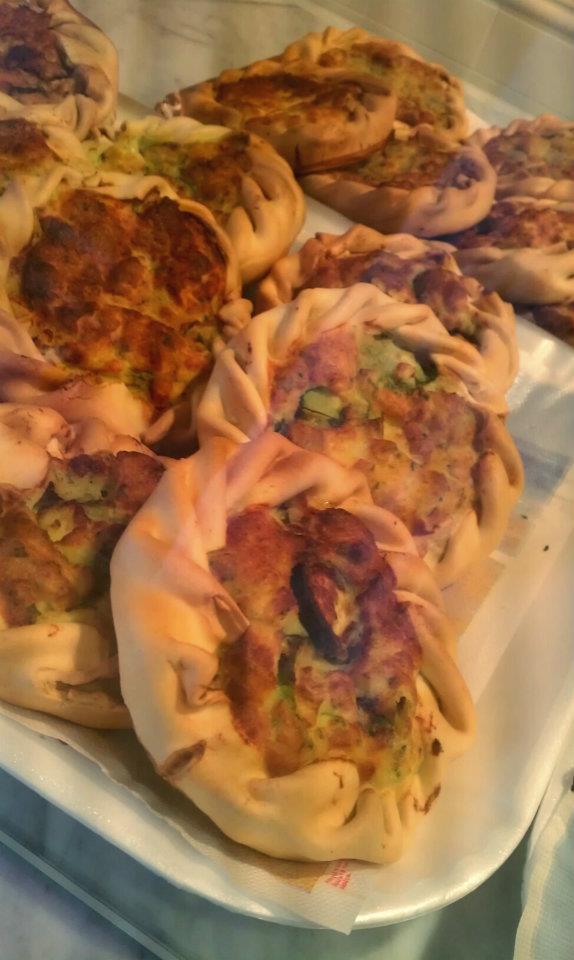 I can’t help but give it a perfect rating because there was nothing wrong with the place. Uniquely unlabeled, friendly service, cold drinks, amazing baked goods, and definitely not overpriced. Since I couldn’t make it to the sicilian pastry brothers, this was the next best thing.

While there were plenty of other more delicious places to stop to have lunch at in Manarola, after spending more than we wanted to the night before we decided to just go for something easy and cheap and in the shade. Planaria Caffeterria didn’t really make anything entirely fresh, but it had a great patio area overlooking the water and the food was relatively cheap. Giovanni had pesto pizza and I had some bruschetta. 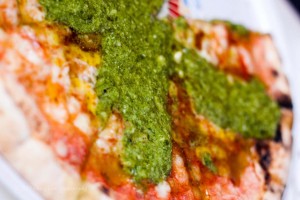 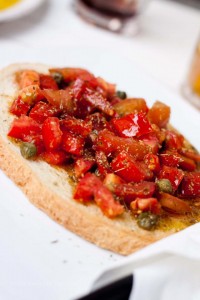 All in all it was a fine place to stop for a quick lunch and to take a moment to relax from the heat and enjoy the scenery. The view makes up for the lack of service and fair food.

At the end of Via Baluardo by the harbor. 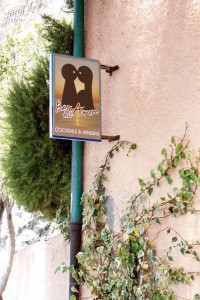 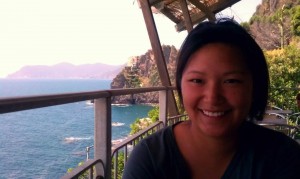 Epicly cheezy, but you can’t beat the view and the prices actually weren’t that bad. We stopped for a couple iced coffees that came in fancy margarita glasses and enjoyed the shade and view. It’s worth a stop. If we hadn’t eaten lunch already we wouldn’t had lunch there. It’s worth a stop. 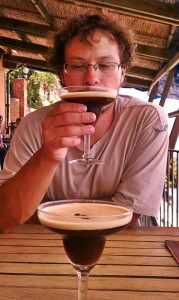 I love this place. Despite the impatient feelings I had waiting over an hour for a table, it was worth it, compared to the overpriced restaurant we had been to the night before. We weren’t sure where we wanted to eat and wandered Monterosso for a while. We thought of settling for a pub and watching the game, but as soon as we saw Sea Bass Ravioli on the menu outside I just had to eat there. In addition, the place was filled with Italians, so it had to be good right?

Also right before we arrived we saw two Italian men hop onto a scooter together, one carrying a couple pizza boxes sitting in the back. I couldn’t help but laugh about how they just fulfilled an Italian stereotype. I wish I had snapped a photo, it was priceless. 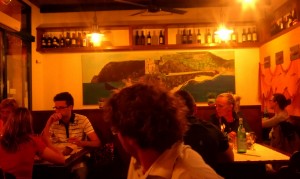 Any way, the service was a little slower than normal slow Italian service, but it was also really busy. They offered us some spumanti for the wait. I think we missed out on the pizzas because everybody seemed to order pizzas and we didn’t noticed until after we had ordered. They looks really good though.

Giovanni got the “tourist menu”… 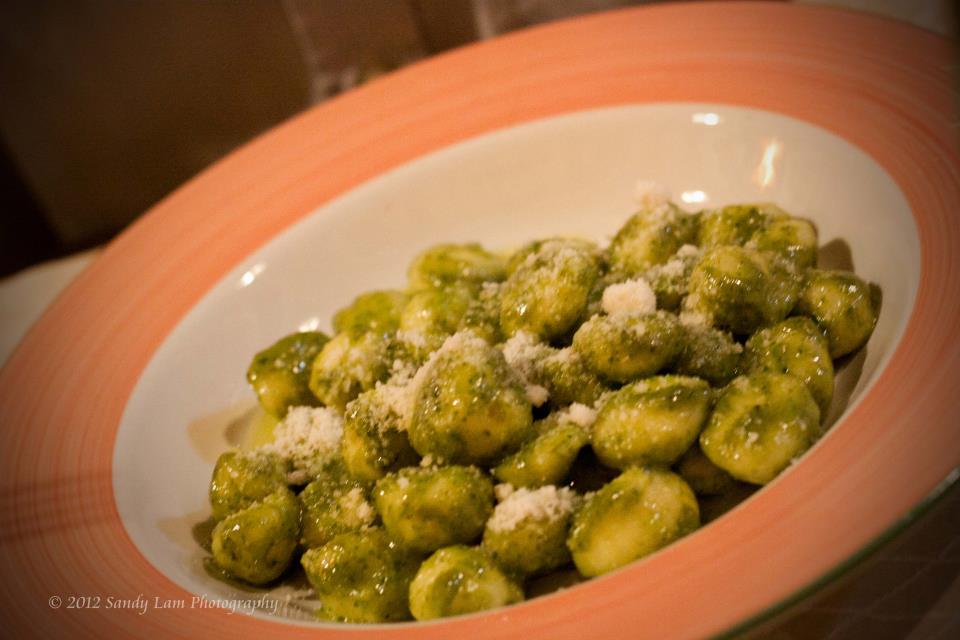 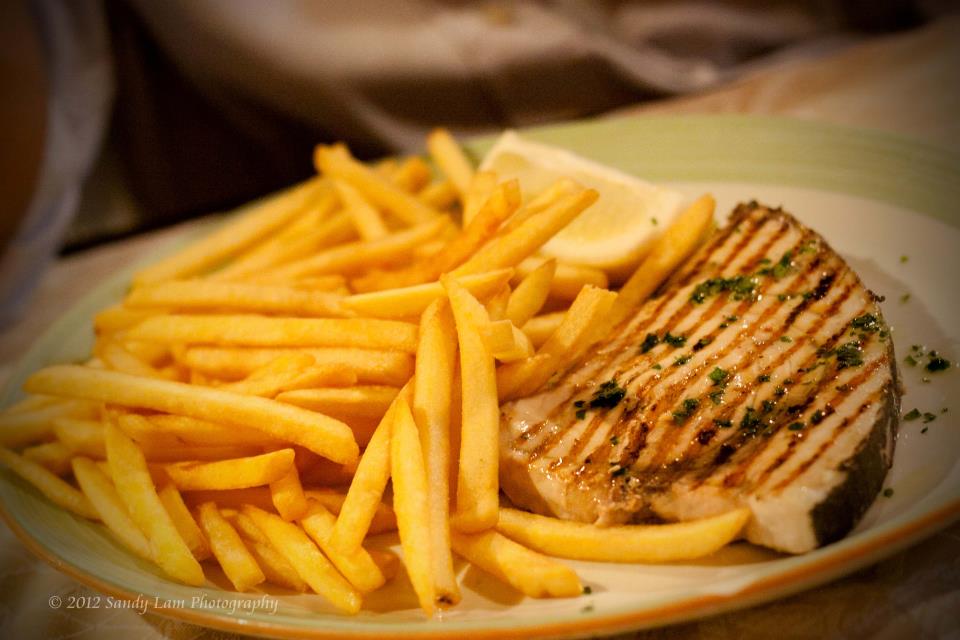 How American are those french fries? Haha. The swordfish was a little overcooked I think but I’m not surprised as most meats in Italy I feel are overcooked. I ordered from the menu… 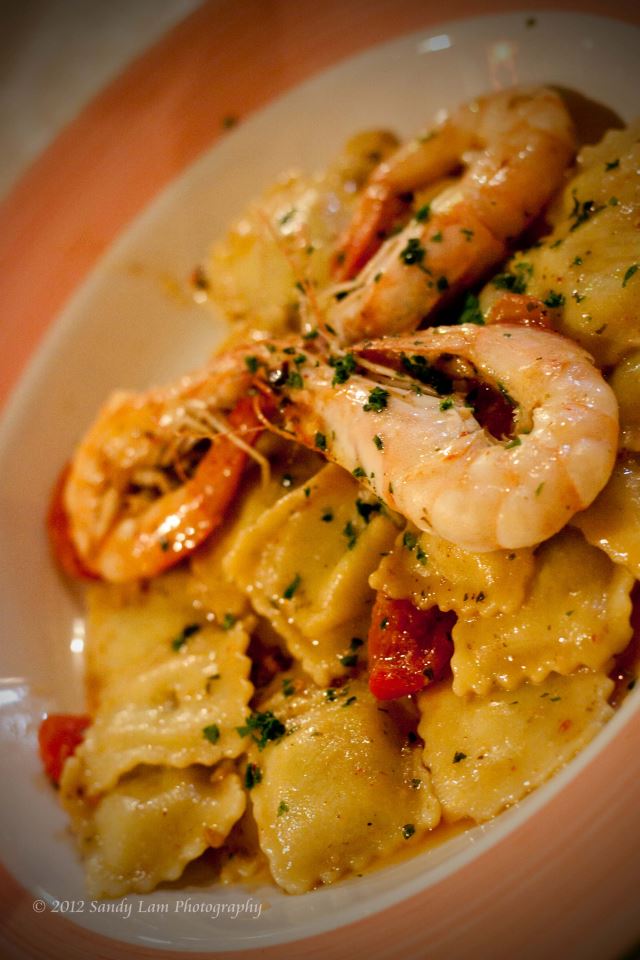 The salmon dish was pretty interesting. I couldn’t figure out how they cooked it because it was cold and soft. The server told me they marinated it in a vinager and lemon and that’s what “cooks” the salmon. I haven’t done much research on this technique but I want to try it because it was TASTY! The fish ravioli tasted just as delicous as it sounds. Flaky tender meat on the inside, fluffy melt in your mouth pasta rapped on the outside. The seafood sauce also was amazing. SOOOO GOOD.

I noticed the table next to me had some delicous fruit dessert that I had been planning on getting but in the end I was just way too stuffed. A much better value was spent here. No harbor view, but the atmosphere was warm and very Italian-like. I didn’t feel like a tourist dining here. Our food, wine, and coffee was about 30 euros less than what we paid the night before and it was MUCH tastier.

Gelato with macedonia (fruits soaked in a sweetner). Enough said. Not the best gelato I’ve had but it’s still tasty.