Happy New Year! Since I just started this blog, I’m going to include some earlier food adventures from the month of December. But I’m hoping to make this entry a weekly event. 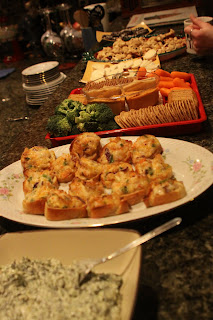 Creamy shrimp bites (these don’t have a real name…I stole the recipe from my mom). This is one of my favorite appetizers to make because it’s delicious, easy, and fast. Anyone that loves cheese and shrimp in general will love this. This spread stores will in the fridge and is still tasty after a couple of days (It’s never lasted more than 2 days in my house just because it gets eaten!)

The following ingredients are just an estimation…I learned to make it without measurements. Serves quite a few (30-40 pieces?)

– 2 Baguettes
– 1 bag of frozen or fresh uncooked shrimp (18 oz. I think) with tails on
– 2-3 bunches of chopped green onions
– Half a sweet purple onion (I don’t remember the technical name off the top of my head)
– Half a bag of shredded cheeses (any assortment really, but no pepper jack)
– The last ingredient grosses me out, and hopefully maybe one day I can use a substitute…but about 1-2 cups of mayo if not more…
– Salt and pepper

Mix everything together and spoon it onto slices of baguettes. Broil at 425 degrees Fahrenheit. The snacks will be ready when the top part just turns brown (usually 5-10 minutes). 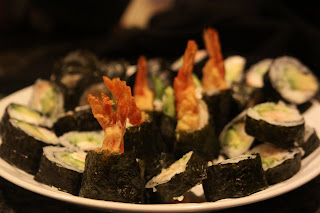 My friend Trevor made us some tasty homemade pizza..I forgot to take pictures of the finished products, but they were amazing…All ingredients were homemade (including the marinara and pesto)
– Magherita pizza
– Pepperoni (ok the pepperoni wasn’t homemade…)
– Veggie (Bell peppers, onions, olives…I don’t remember the rest..I didn’t eat it)
– Meat lovers (Italian sausage, pepperoni, onions, feta, I don’t know what else because I didn’t eat that one either)
– Pesto, pine nuts, feta, fontina, mozzarella, italian sausage, bell peppers
– Hawaiian (canadian bacon and fresh pinapple) 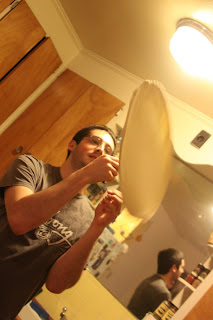 I have to express my extreme displeasure with Diva Espresso. Only for their chai tea lattes though. But I was reminded the other day why I so strongly dislike the chai there, I feel that it needs to be documented. When I got my regular soy chai for the first time at Diva, I was sadly dissapointed. I remembered taking 5 sips and throwing it away. And if anyone knows me, I HATE to throw away food. Especially food I’ve paid for! I went there a second time because everyone at my work raves about Diva’s coffee. Being the rejected Seattlite that doesn’t actually drink coffee, I stopped by again at the same location to get another chai, hoping that maybe the last time was just a fluke by a barista’s first time on the job. The second time – it tasted exactly the same. Different barista’s – same taste. A dirty, oily, burnt rubber taste is what it reminds me of. I don’t know if it’s the soy or the chai – but after that I said never again. And then someone offered to go on a coffee run (not knowing where they were going I ordered a chai, and then I was reminded why to never order a soy chai for Diva’s. I’d like to know what it is I don’t like about it, but I’m pretty sure I’ve never had a more foul experience at a coffee shop. I could go on an on about chais and teas…so maybe I’ll save that for another entry… 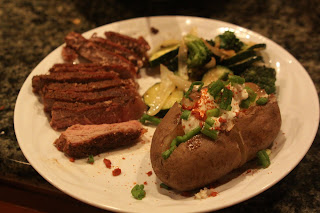 For Christmas Day, I decided to try my first standing rib roast….in a nutshell it didn’t go too well. I tried a recipe I found by Paula Deen. It looked and sounded easy enough, so I tried it. I was only cooking for three people though so I tried to find a smaller roast and guess on cooking times. The first time I took it out, the meat was quite rare. The second time I took it out I ended up just slicing some pieces before putting it back in. In the end the seasoning was fantastic, but the meat texture…not so much. It was edible, but not the greatest.

I think that’s it for now…it’s been a while so I’m sure I’ve missed some things.