Birthday in Portland – Bite of Oregon So we’ve finally made it to the end of the week. My bestie Brandon came down for the Handful show the night before along with his charming friends from Bellingham. Brandon and I took the train down to Oregon to enjoy the scenic route. Turns out we met some great Canadians and had a ball. To sum the train ride down, an elderly woman stopped us as we were leaving the train and said, “Whatever it is that you are doing…rock on!” She later told us she was 83. AWESOME.

So the first night we just sort of hung out and wandered around. Here are some notable foods: 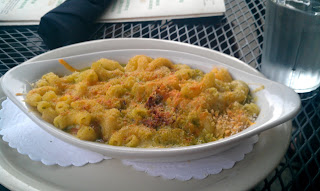 Macaroni and cheese with pesto! Got this at Paddy’s. We sat in the patio on the street for some GREAT people watching. Didn’t get any traditional irish food, but I am pretty sure this mac and cheese was amazing. 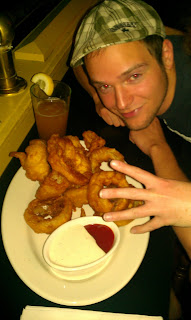 These onion rings though…were AMAZING. BEST ONION RINGS EVER. We stopped by Rialto’s to shoot some pool and hang out and I smelled these when I walked in. I wanted some. You know how when you have onion rings and you bite into it, the onion part pulls out of the breading and it’s all stringy and stuff? Well these onion rings were so well breaded, when you took a bite, the onion part actually stayed inside the breading. I’d be really interested to know how they did that. And by the way these were HUGE. The onion rings were basically the size of my palm. But they were SOOOOO AMAZING. 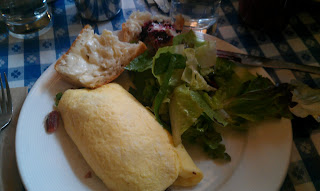 The next morning we had breakfast at Bijou Cafe. A moderate sized french breakfast place. They serve very strong mimosas, not sure if there was any orange juice at all. I got a french omlette with smoked cheese, bacon and green onions. It came with a baguette and greens. Of course everything was organic, and the place sort of lived up to the Portlandia stereotype. Our server reminded me of the one in this hilarious clip. In fact there were a few stereotypical things I observed in Portland. Including my friend Kai, who lives in Portland and came out with us. He was wearing a shirt with a bird on it. And the bird was designed with little birds on the inside. So hilarious. Again, if you want to see what I mean, watch this.

After breakfast we digested while exploring Powells for a couple hours. Love that place. Then we finally made it over to the Bite of Oregon. The following series of pictures are compliments of my friend Jordan, who basically was my food photographer for the day. Thanks Jordan! 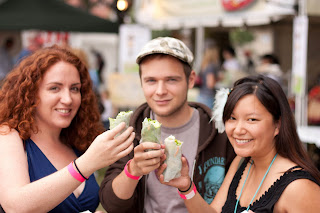 So I lie. I totally forgot to tell you the first thing I actually got was a commemorative wine glass that came with a holder for your neck. that way you can eat with both hands! So genius. I loved it. (you can see it in the picture with the shrimp below and when I am holding my pie and ice cream) 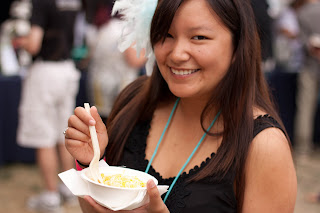 Next up, mac and cheese. Which wasn’t very good. It tasted like better quality noodles but with velveeta. 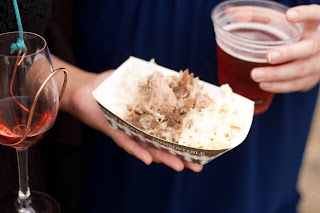 Then came the Kaluha Pork. This is quite possibly my favorite thing I got there. The pork was incredibly tender and juicy. It came with rice and macaroni salad. 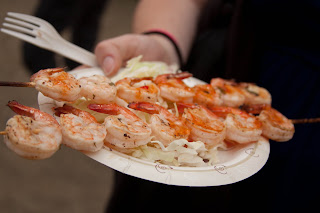 I shared some of Christina’s grilled shrimp with a tequila lime marinade. It was actually a little dissapointing. It was tasty but serve with a sweet chili sauce and I felt like it overpowered the shrimp. I couldn’t really taste any lime or tequila on those things. 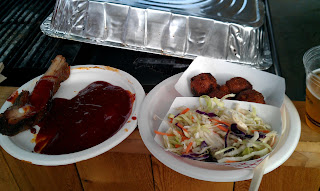 Then I took a break, but ran into our canadian friends who bought ribs to share so I had that, plus coleslaw and hush puppies… 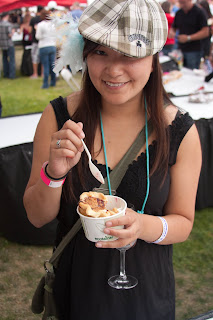 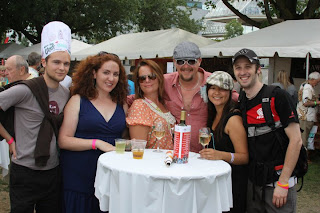 The whole gang with some wine. Brandon, Christina, Carrla, Alan, Me, and Jordan. Overall I found the Bite of Oregon extremely delightful. I’ve stopped going to the Bite of Seattle because I feel like you’re limited to two foods there. Everything is huge portions and expensive. At Oregon’s bite everything is smaller and I feel like I definitely got to taste quite a bit! The best part about the event is that the entire area is a beer garden. Meaning all you had to do was get a wristband showing you were of age and you could bring your drinks anywhere. Being limited to a space for beer gardens has always been frustrating. I find them rather boring. But in Oregon you can bring your drinks with you and explore the music and food! 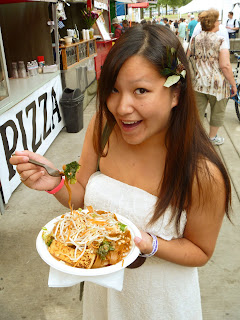 One more before we bring this to a close. During our last day we stopped by the Saturday Market (even though it’s open Friday, Saturday, and Sunday). I got some phad see ew for brunch. 🙂 It was a little dissapointing. Kind of dry and flavorless. Brandon had this amazing falafel though. Mmmm…

So all and all…successful trip. I would highly recommend going to the Bite of Oregon. 🙂

That brings my birthday week to a close….time to exercise everyday for the next month.